Boxing
Features
There have been some truly gruesome battles in the ring
Kieran Spratt
16:00, 31 Oct 2020

Ah, Halloween. A day where it’s socially acceptable to revel in all things gory. Boxing has had some particularly gruesome nights over the years, and for that reason is tailor-made for such a holiday. Don’t fancy watching a horror movie this year? Don’t fret. Why not check out these five boxing bloodbaths instead... 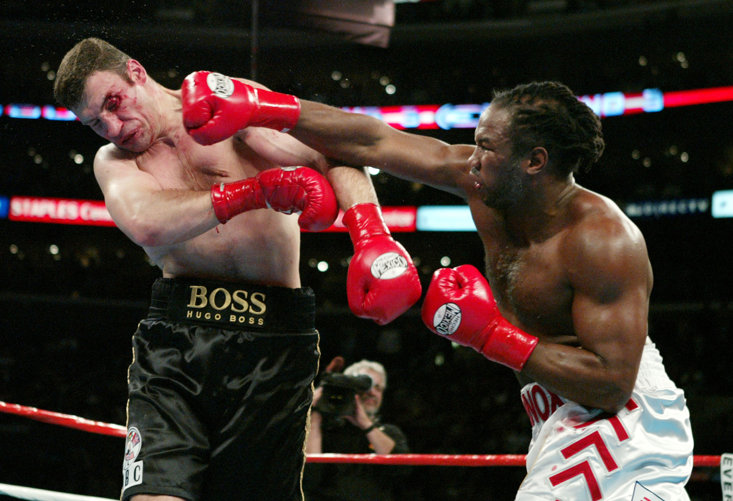 Lennox Lewis’ last dance in the ring was a savage spectacle, with six rounds of unadulterated carnage shared between the Briton and Vitali Klitschko at Los Angeles’ Staples Center in June 2003. In just under 20 minutes, the fight would drag Klitschko into new realms of pain and discomfort.

Things got especially gory in the third round, especially with regards to Klitschko’s once-chiselled face. At the start of the round, Lewis’ trainer, the legendary Kronk master Emanuel Steward, told his charge to take the fight to his Ukrainian aggressor, which Lewis duly did, landing a devastating right and opening up what would be a fight-changing gash over Klitschko’s left eye.

Klitschko bravely fought on but the damage was done, his face looking more and more like a bloody Picasso as the seconds went by. The referee was forced to end the fight in the sixth round, handing the brave Klitschko a TKO. 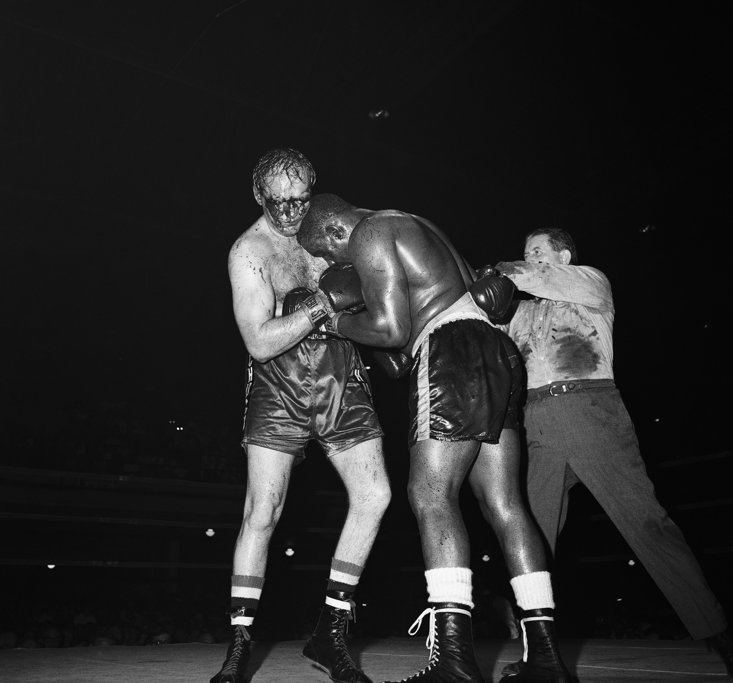 What do you get when you cross a fighter they call ‘The Bleeder’ with one of the most fearsome boxers to ever live? Carnage.

That’s what happened when Chuck ‘the Bayonne Bleeder’ Wepner, whose fight against Ali would inspire Sylvester Stallone to write Rocky, faced Sonny Liston in New Jersey in 1970. The fight itself was actually pretty competitive with both men rocking one another, but Wepner’s susceptibility to being cut, hence his nickname, cost him yet again with his face streaming with his own blood.

The fight was ended by the referee in the ninth round and when all was said and done, Wepner suffered a broken nose, a cracked cheekbone and required the best part of 100 stitches. 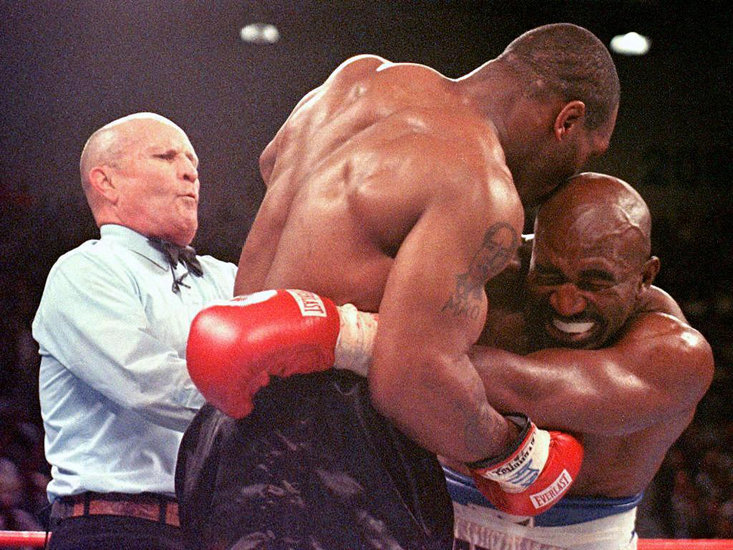 You can’t talk horror-show boxing matches without bringing up Evander Holyfield’s rematch with Mike Tyson in Las Vegas in 1997, a fight that contains actual cannibalism. With the exception of a bad night in the office against James ‘Buster’ Douglas in Tokyo, Tyson had blitzed his way through the heavyweight division, wielding raw intimidation as a weapon of mass destruction along the way. Unfortunately, Holyfield hadn’t shared the fear so many who faced Tyson did, and beat him handily in their first meeting a year earlier, using his superior strength to frustrate Tyson.

In the rematch, those advantages played out similarly, and again, Tyson began to get a bit frustrated. In a clinch between the two fighters in round three, Tyson rolled his head back and proceeded to take a bite out of Holyfield’s right ear, pulling away a one-inch piece of cartilage and spitting it to the canvas. Incredibly, the fight continued, with Tyson losing two points, until he ended up in another clinch with Holyfield and bit his left ear. The fight was finally stopped and now the two are friends. 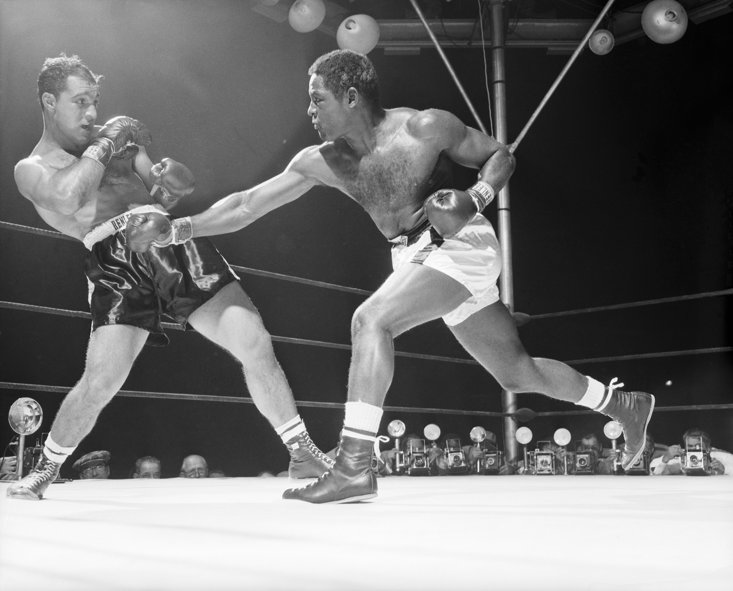 Heavyweight great Rocky Marciano may have retired with an unblemished 49-0 professional boxing record but that doesn’t mean it was always easy, and in his fight with the incredibly tough Ezzard Charles, he had to put in a career best performance to ensure he left the Yankee Stadium with the win. Charles looked like causing an upset inside the first four rounds, boxing with precision and picking apart the Brockton Bomber until the latter’s famous stamina and endurance pulled him through the second half of the fight, with the two going toe-to-toe all the way until the final bell.

After the dust had settled, Marciano needed surgery on his face to rectify a gaping wound left there by Charles’ fist and Charles’ own face had swollen beyond all recognition. 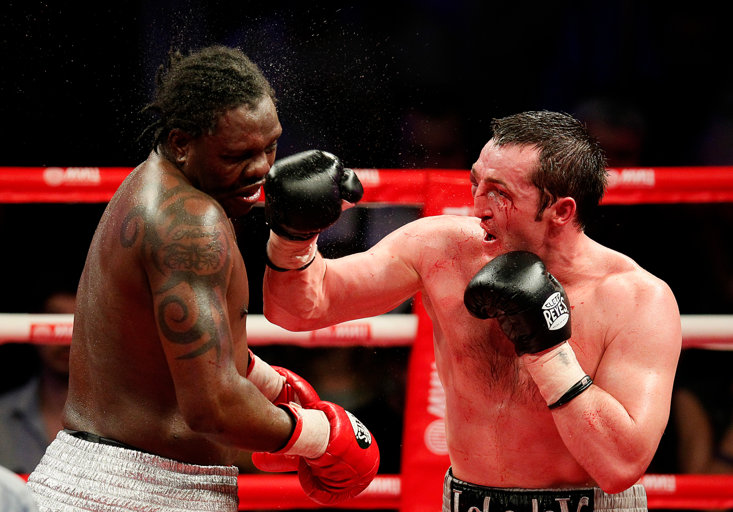 The Goonies isn’t a horror but there’s no denying, as lovely as he is, witnessing Sloth for the first time was pretty terrifying. And it’s one fighter’s eventual resemblance to the character that makes this fight so chilling.

In the gruesome 2013 WBA World Cruiserweight bout between Denis Lebedev, fighting on home soil in Russia, and Cuba’s Guillermo Jones, things turned frightful when Lebedev’s right eye, which had been pummelled relentlessly by Jones since the opening round, had begun to swell to the size of an orange, and his face had begun to morph into a grotesque caricature of its former self. Amazingly, the fight was never stopped (Russia, eh?) and it wasn’t until the 11th round that Jones was able to finally stop his opponent, who you’d imagine would have quite the headache in the morning.