Eric ‘The Eel’ Moussambani prepared himself, waiting to dive into the gigantic pool that seemed to go on for miles in front of him. The entire world was watching on as he stood on the cusp of Olympic folklore in the 100 metres freestyle. Little did the millions of television viewers across the globe back in 2000 know just how Eric had come to be splashing into the water.

Less than a year earlier, the showpiece occasion was not even on his radar, until one day he heard on the radio that his country, Equatorial Guinea, was looking for a swimmer to compete in Sydney that summer. It was there that his journey to stardom, and one of the most heart-warming stories in Olympic history, began.

It was only eight months before the games that, Moussambani, who would gain entry to the Olympics via a wildcard provided to developing countries in order for them to participate, began training in a river with fishermen working nearby teaching him how to kick his legs and swim in the deep vast water which was infested with crocodiles and snakes. Soon, he had the privilege of practising in the safety of a private pool in a hotel, though he was only allowed entry between 5am and 6am, and he practiced there only three hours a week. At least he had a pool to himself, it didn’t matter that it was miniature compared to the vast one he would be swimming in at the Olympics. 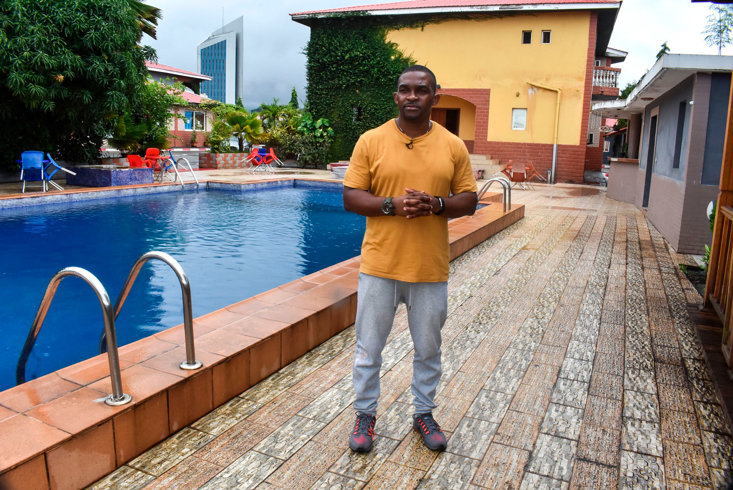 ERIC REVISITS THE PRIVATE POOL HE TRAINED IN

It was a far cry, a million miles away in fact, from the facilities Australian Ian Thorpe, the five-time medal winner at those games 20 years ago, will have used in the build-up. Eric was a complete novice but soon found himself competing with the best.

It took him three days of travelling to reach Australia, a place he admits he had not heard of prior to the beginning of his quest, and when he got there, he was mesmerised. He was in awe of the Olympic village, while the pool was by far the biggest he had ever seen.

Now filled with trepidation, he asked anyone and everyone for advice and tips. Still learning, he thoroughly observed everything around him, how others trained, how they prepared, how they moved through the water. Some would flatly ignore Eric, while others would give advice where they could. One South African coach noticed and taught him how to swim like the pros. Eric admits he even had to learn breathing techniques.

Then came the event which would change his life forever.

Eric’s two competitors in the heat jumped the gun, started too early, and were disqualified for false starts, leaving him to race unopposed. He now had to swim alone, which made him feel even more nervous, “I knew that everyone was watching me but something in my mind said just go for it.”

For the first 50 metres, he looked like a natural, and the ‘Eric The Eel’ nickname seemed fitting. He flew through the air and into the water with elegance and great technique, as he had been taught. However, he admits himself that by the halfway stage he was seriously lagging.

“In that last 50 metres, to be honest, I was so tired I was going to stop. I couldn't feel my legs or arms, everything was very heavy. When I heard people clapping and cheering my name, that gave me more power to finish,” he told the Sydney Morning Herald. With his entire nation watching at home too, he knew he just had to give it his all.

Finally, after 1:52.72 he completed the heat. It had taken him more than twice the time it took Dutchman Pieter van den Hoogenband to set a world record in the semi-finals at 47.48 seconds. Nevertheless, he received a standing ovation from the 17,000 spectators there to witness his special feat. While most athletes are hellbent on medals, records and glory, Eric was just “so happy that I did it!” 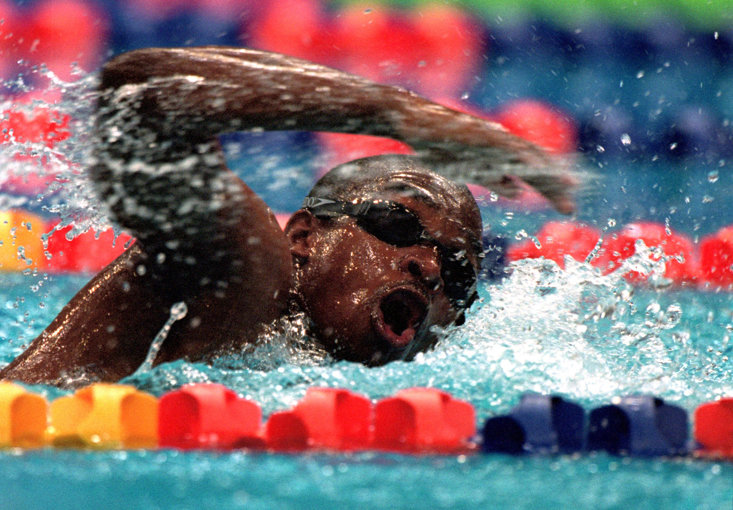 Having captured the hearts and minds of everyone watching, Eric ‘The Eel’ Moussambani was now a famous Olympian and was garnering attention.

“After the race I went to the changing room and I laid down because I still couldn’t feel my body,” he said in the Herald interview this summer. “I went back to my apartment in the Olympic village and I slept from 11am to 4pm. When I woke up, on the television I could see my pictures. I thought I did something wrong.

“When I went to the Olympic restaurant where the athletes eat, that’s when people started asking me for autographs and pictures. That’s when I realised I became very famous.”

He might not have claimed gold but people adored his will and desire.

From such humble beginnings, he was on the rise. His goggles were reportedly sold at auction for $4638 just days after the event which had made him a household name.

There was a photoshoot with Speedo, parties with the Aussie swimmers, the chance to surf at Bondi Beach and even an opportunity to climb the Sydney Harbour Bridge. One shop owner gifted him tennis shoes, so enthralled he was by his story. Eric was living the dream.

While the fame was huge, so was the improvement in his swimming. At an invitational in Germany six years later, Moussambani recorded a time of 52.18 for the 100 metres. The talent had clearly always been there, it just needed nurturing.

Now 42, Eric lives in Malabo, the capital city of Equatorial Guinea, and trains the next generation of Olympic swimmers as national swimming coach, a role he has held and enjoyed for the last eight years.

What he learned all those years ago, from everyone from the kindly fisherman to the knowledgeable South African coach Down Under, he now passes on to others. Spending 30 hours a week with the young hopefuls, Eric also works for a petroleum company and has four sons.

To this day he still appreciates how much the Olympic Games and that special wildcard opened doors for him like nothing else could have.

“When I was preparing for the Sydney Olympics I didn’t have a swimming pool. Our swimmers have an opportunity to swim in a pool now, so when they go to an Olympic Games they won’t be scared like I was.

Whether it’s three or 12 who qualify, it wouldn’t be possible without ‘Eric The Eel’s steely determination after he was, quite literally, thrown in at the deep end.