Rugby
Features
The Azzurri haven't won a game in five years, leading many to suggest a change of format
Ali Stokes
07:00, 26 Jan 2020

Can you feel it yet? That murmur in the air? The gradual excitement slowly building towards fever pitch next weekend? Following on from a compelling 2019 Rugby World Cup, this year’s Six Nations Championship is as hotly anticipated as any in recent memory.

But there is continued speculation as to how the Six Nations could be altered in future in the wake of Italy’s continued struggles coupled with the progression of other rugby forces around the world. So could there be more countries involved? Or are there other ways to give the much-loved competition a reboot?

With 98 games played and just 12 won since their arrival at the turn of the millennium, Italy are now regular cause for debate regarding a change to the tournament. With their last Six Nations win coming as far back as 2015, talk of revolution in the shape of the Georgians is a weekly discourse during the tournament.

Georgia play in the Rugby Europe International Championships (REIC), essentially the second-tier Six Nations, against the likes of Romania, Spain and Portugal, and have won 10 of the last 12 tournaments. Most famously recognised as scrummaging specialists - turning the set-piece into an art of broad-shouldered 120kg men clumped together in the middle of the field – they have caught the public’s attention with impressive November Internationals and Rugby World Cup performances.

As with the Premiership, talk of relegation and promotion in a Six Nations context divides public opinion, with many greatly opposed to the savaging of tradition. ‘If it ain’t broke, don’t fix it,’ right? There are just as many voices, however, calling for the Georgians’ inclusion, having become tired of the Azzurri’s losing streak.

One such advocate regularly found atop his soapbox is 2003 Rugby World Cup-winning coach Sir Clive Woodward.

“The organisers have let Italy and the competition down badly by not introducing relegation play-offs long ago,” Woodward wrote in the Daily Mail in 2017. 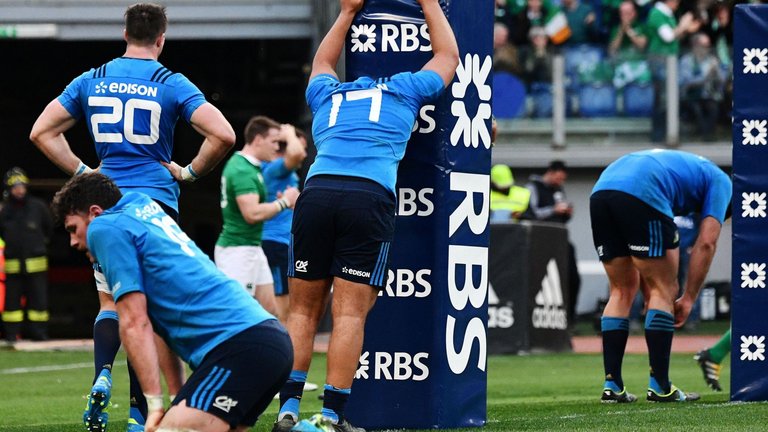 Two years later, Woodward added: “For [Italy’s] own sake, there should be a one-off play-off game. Italy play this at home and if they can't beat Georgia, Russia, Romania, Spain — or whoever is next cab off the rank — in a one-off game in Rome then they should be relegated.”

Woodward’s suggestion of a play-off game against the REIC champions could save the tournament the severe financial casualty of losing nations that boast colossal viewing numbers - primarily England and France - should they suffer a catastrophic campaign and find themselves at the bottom of the table. Countries that ultimately remain far superior to the side vying for promotion arguably need to be retained.

Woodward is not the only England head coach to publicly back consideration of tournament evolution. In 2019 current Red Rose boss Eddie Jones was asked his opinion on promotion/relegation.

“The organisers talk about the Six Nations being the best rugby competition in the world and it probably is close to it,” Jones told the BBC. “But to improve it you’ve got to find a way of making sure you’ve got the six best teams in Europe always playing in it. If that involves relegation, then it’s something that should be looked at very closely.”

But why stop there? Why continue adding one nation at a time in an archaic one-in-shut-the-gate routine?

During the 2019 Rugby World Cup, Japan won the rugby public’s hearts with displays of ruthlessly efficient, pro-attacking rugby. The Brave Blossoms played with a pace and dynamism many viewers have been crying out for in an age of three-minute scrum resets and 10-second box-kick routines. Subsequent cries for their inclusion in an annual spectacle sprouted up overnight, with parties from the Six Nations and the Rugby Championship playing a game of tug-of-war over the new kids on the block. 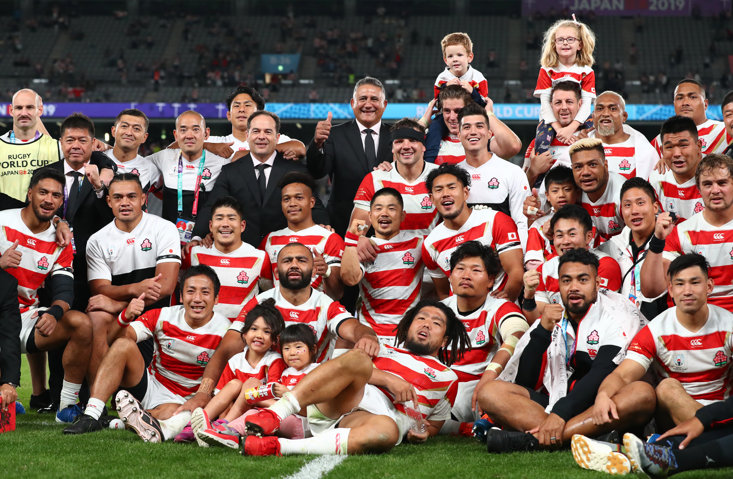 An ambitious and revolutionary step for the Six Nations would be to adopt a group format, much like the Pro14. Originally a Celtic league that has since seen the addition of two Italian and two South African sides, the Pro14 has thrived since expanding from 12 teams to 14 and adopting a group format in 2017.

While it took some getting used to, the group stages have only made the Pro14 more interesting, whilst also adding the oh-so valuable access to the rugby-mad South African broadcast market.

Is there room for an eight-team group version of the Six Nations with one grand finale? With Georgia and one of Japan or another REIC team joining the tournament? If we’re honest, it’s unlikely.

However, between the vastly-increased TV audiences that would spike broadcast revenue and the promise of developing more ‘Tier One’ nations, the debate about a group-stage expansion of the Six Nations is not about to go away.

x
Suggested Searches:
Tyson Fury
Manchester United
Marcus Rashford
Lewis Hamilton
F1
Air Jordan
More
sports
Feast Your Eyes On Our Five Fantasy Gifts For The Fitness Fanatic...
Every family’s got one, the fitness fanatic. The one who’s a slave to the strava, the one [ ... ]
cycling
How Emily Chappell Went From Courier To Conquering The 4,000km...
Emily Chappell was once an imaginative inner-city courier, who thoroughly enjoyed riding round metropolitan [ ... ]
sports
Bow Down To Keegan Hall, The Artist Behind This Amazing Drawing...
With just a handful of pencils, a $5 sheet of paper and a whole lot of talent, Keegan Hall blew up the [ ... ]
football
Money, Moods And Mario: Micah Richards On Life At Manchester...
Micah Richards has admitted that Manchester City’s takeover more than a decade ago split the dressing [ ... ]
sports
Big Waves, Exotic Dancers, The Life Of UK’s First Pro Surfer,...
Hawaii is a lost paradise. Ted Deerhurst was drawn there as a dreamer. It was his Mecca, the ultimate [ ... ]
football
With 313 Goals Between Them, It's Football's Greatest Ever Goalscoring...
It’s one of the sights which makes football fans giddy, a goalkeeper striding up for a corner. [ ... ]
boxing
Anthony Joshua And Me: Legendary Team GB Coach Reveals All About...
“He was shaking like a leaf!” Paul Walmsley, Anthony Joshua’s former Team GB [ ... ]
sports
Career Ending Dogs And Huge Gatecrashing Alligators, When Animals...
We love all creatures great and small but sometimes pesky critters and colossal creatures, [ ... ]
rugby
Wales Face Strong England Against A Backdrop Of Departures,...
It has been 20 months since Wales lifted the Six Nations trophy as Grand Slam champions. Wayne Pivac [ ... ]
boxing
The Mike Tyson Interview: ''Living Takes A Lot Of Courage''
Mike Tyson’s life has been a well-documented roller coaster ride. A difficult childhood, then [ ... ]
football
The Secret Boot Camp And Drills That Made Marcus Rashford The...
If we’ve learned one thing about Marcus Rashford in 2020, it’s that he doesn’t rest [ ... ]
boxing
35 Years Of Rocky IV, 10 Hard-Hitting Facts About Balboa’s Greatest...
Can you believe it’s been 35 years since Sylvester Stallone’s Magnum Opus, Rocky IV, premiered [ ... ]
sports
How The Art Of Ice Climbing Saved The Life Of Teenage Drug Addict...
At just 12 years old, Margo Talbot was using drugs and drink to help medicate her juvenile depression. [ ... ]
boxing
When's It On? How To Watch? Why No Knockouts? Your Tyson-Jones...
Haters gonna hate. For Taylor Swift 2014, read Mike Tyson 2020. He’s back in the ring this weekend [ ... ]
sports
Ruqsana Begum, The Kickboxing Champ Who Kept Her Career A Secret...
Muay Thai kickboxing isn’t for the faint of heart. Pain is a bedfellow. An adrenaline-fuelled [ ... ]
sports
Meet The Man Who Can Hold His Breath For 7 Minutes And Freedive...
“The look, of love….is in your eyes...”  One hundred metres underwater, with [ ... ]
boxing
Anthony Joshua's £1M Car Garage Boasts A Stretch Roller And...
Killer speed, energetic and ferocious, Anthony Joshua’s car collection is just like his boxing [ ... ]
football
To Naples And To The World, Maradona Was More Than Just The...
Naples is not a city, it’s an experience. It is a heartbeat, a way of life. Diego Maradona got [ ... ]
sports
How Emily Harrington Became The First Woman To Climb 3000ft...
There was 3000ft of sheer granite between Emily Harrington and greatness. The monolith had proven her [ ... ]
football
All Hail Roc Nation, Jay-Z's £56M Powerhouse With Rashford And...
Seriously, how can Jay-Z possibly have 99 problems when his brilliant entertainment company Roc Nation [ ... ]
motorsport
Stand By For The Resurgence Of Ricciardo At McLaren In A Tantalising...
All the great love stories have a happy ending, with the protagonists finally getting together after [ ... ]
motorsport
Monte Carlo To The Arctic Circle, The Five Wackiest Racing Tracks...
As the Baja 1000 drew to a close in Mexico this weekend it marked the end of one of the craziest races [ ... ]
us-sports
About Time! Why Trailblazing Kim Ng Is The Perfect Person For...
The reader’s letter to the New York Times editor proclaimed, "A trailblazer who has been [ ... ]
boxing
The Times Tyson Fury Used Bespoke Fashion To Get Inside His...
Tyson Fury loves a knockdown and he loves a put down. He’s got a particular way with words but [ ... ]
rowing
The Brit Who Rowed The Atlantic, Pacific And Indian Oceans In...
Sarah Outen has pretty much conquered the planet, en route becoming a superlative-defying superstar [ ... ]
golf
Tiger Woods v Phil Mickelson - The $9m Duel In The Vegas Sun...
It culminated under the floodlights in Las Vegas, Nevada... Of course it had to happen in the 'Entertainment [ ... ]
football
A Rocketship Of A Mercedes, Classic Dodge And £1.5m Roadster,...
Lionel Messi is the best footballer to have ever lived. He is also one of the richest athletes to have [ ... ]
boxing
Don King, Chechnya And Cocaine, The Craziest Tyson Tales From...
Fifteen years on from retirement, Mike Tyson goes to war once again next Saturday against a formidable [ ... ]
boxing
Lennox Lewis: The Untold Story Shines The Spotlight On A Man...
"Really, the question we were trying to explore in the film was: who do we examine as our heroes?" [ ... ]
football
Sleep, Squats, Small Meals, The Secrets Of Ronaldo’s Age-Defying...
Cristiano Ronaldo’s amazing body has taken decades of work. He was just 11 years old when he first [ ... ]