Tennis
Features
Tennis legend Maureen Connolly may not have burned the longest, but she burned brightest
Jack Porter
16:00, 07 Sep 2020

No other player has arguably had such a profound effect on tennis, in such a tragically short space of time than Maureen Connolly.

Affectionately known as ‘Little Mo’, she was a Grand Slam champ at 16. Aged only 18, she became the first female, and only third ever player (behind Fred Perry and her compatriot Don Budge) to complete the Career Grand Slam.

And she achieved the feat without even dropping a set.

Furthermore, she did so as part of an incredible six consecutive majors, and an extraordinary fourteen singles titles across 1953. The year after, she completed the remarkable feat of three back-to-back victories at Wimbledon, and was named Female Athlete of the Year for the third consecutive year by the Associated Press.

But aged 19, she was forced to retire. And at just 34, she had passed away. She was San Diego’s sweetheart and the Californian court queen. 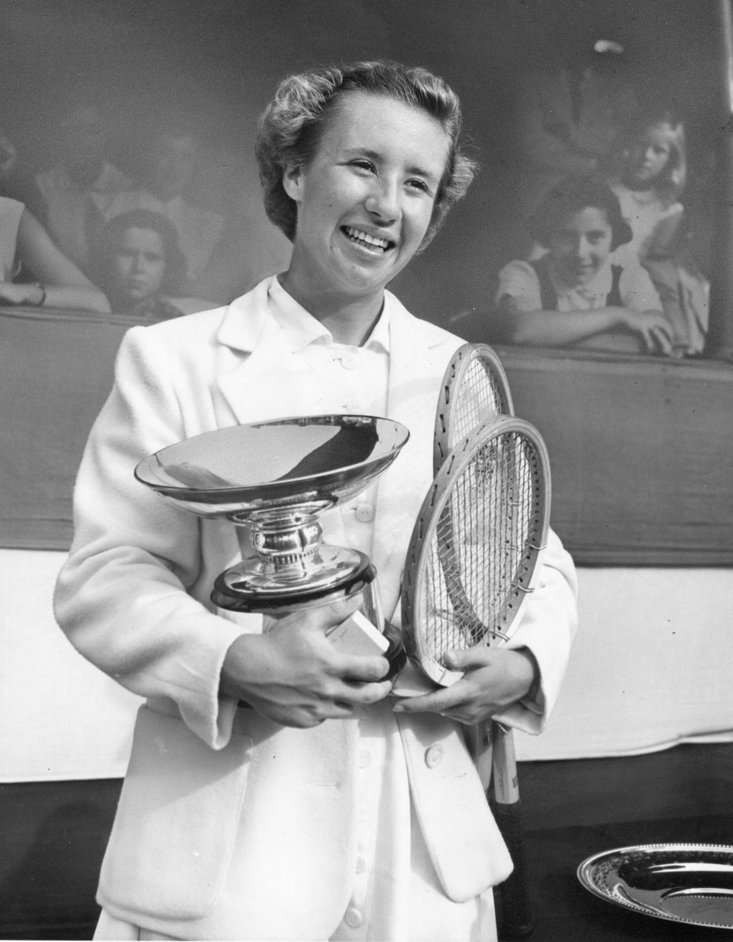 Connolly at the US Championships in 1951 (Getty Images)

It was aged eleven when she was first dubbed “Little Mo” San Diego History recalls, by sports writer Nelson Fisher, who observed that the young tennis prodigy had a forehand and backhand that was reminiscent of the firepower on the battleship USS Missouri, a vessel that was known as the “Big Mo”. It’s quite fitting that she also became known as the “killer in pigtails”.

Her success in the early 1950s is remarkable even by today’s standards. She, a 5ft 5 spitfire of a racquet wielder, dominated all four major corners of the globes. Wimbledon, France, Australia, her native US. Tick, tick, tick, double-tick.

But whilst most top-end tennis players have a substantial gestation period to contemplate that they will no longer be able to compete at the top of their game, Maureen Connolly’s career ended almost instantly, on the morning of July 20, 1954.

She may not have burned the longest, but she certainly burned brightest.

Her marriage with tennis began as a ten-year-old, when Connolly served as a ball girl for the local pro Wilbur Folsom. Under Folsom’s eventual tutelage, she trained with a tennis racquet that cost just $1.50, and began practising on the only available space, the San Diego public city courts.

Steadily she began to climb the amateur rankings. The tiny teen of tennis was beginning to make a name for herself.

But behind her darling demeanour lay a demon; think of her as the Regan McNeil of the tennis world, with forehand spin, rather than forehead spin, if you will. In her autobiography Forehand Drive, she described herself as,  “no ordinary little girl, and tennis to me, even then, was much more than just a game. Defeat was unendurable; it could not be talked away by the sympathy of an understanding parent. It must be avenged!”

When perpetual rival, Doris Hart, called Connolly a spoilt brat in the US Championships of 1951, it unleashed a whirlwind. “I never hated anyone more in my life!” Connolly later wrote, “I turned on her like a tiger.” Weaponising her racquet she came back from 4-0 down, not once but twice, to win 6-4, 6-4. 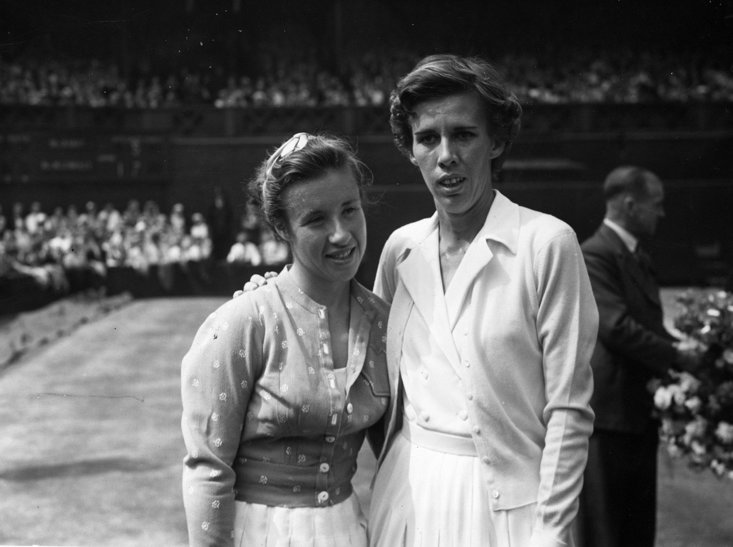 Her aggression, anger, ruthlessness, and “hate losing more than I like winning” ethos lead her to going stratospheric in 1952, when she won two of the four majors, retaining her U.S Slam, and over the Atlantic in Wimbledon.

A joyously proud San Diego welcomed her home with a parade, with an estimated 15,000 people lining the city streets to see Little Mo coming home. The Mayor of the city, John D. Butler, even declared September 9, 1952 to be “Maureen Connolly Day” In addition, she was presented with an unusual gift.

She refused to loosen her grip of the most prestigious tennis tournament on the circuit, with the 1954 Wimbledon Championship seeing her defeat Louise Brough 6-2, 7-5, one of ten tournaments played and won that year, and her third straight Wimbledon title.

It would however be Little Mo’s last hurrah before fate cruelly intervened. 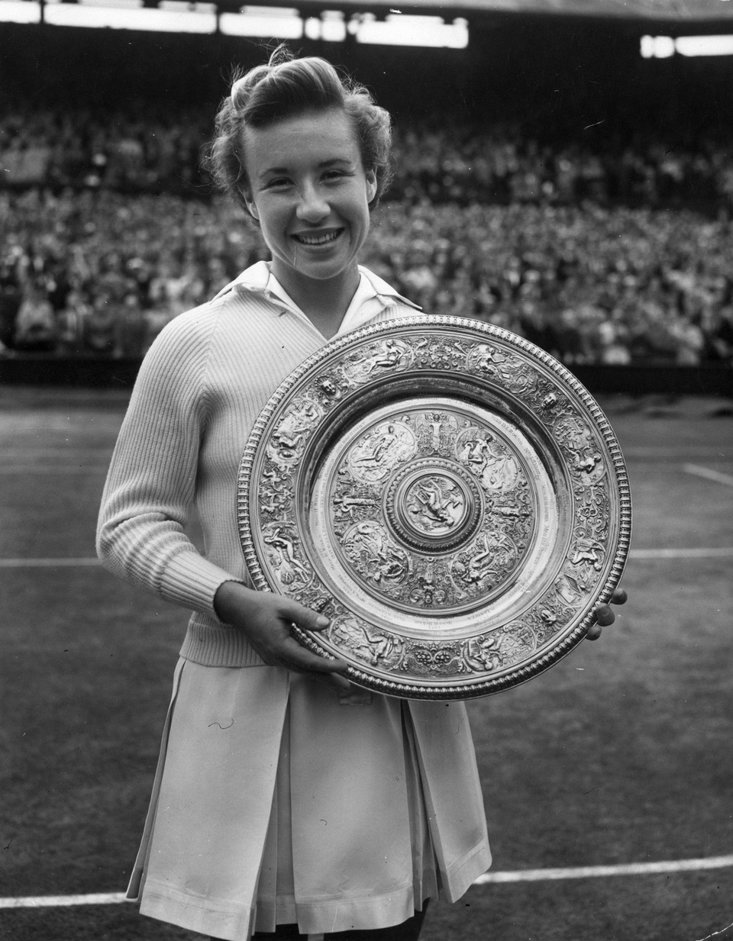 Connolly at Wimbledon in 1954 (Getty Images)

She returned home after her Wimbledon win. Colonel Merryboy was awaiting a ride. On the trail, a cement truck approached, the horse becoming frightened as the vehicle neared. The horse turned, and Connolly’s leg became caught between Colonel Merryboy and the truck, breaking her fibula and producing extensive muscle damage.

For anyone it would be a devastating accident. For the world’s greatest tennis player, it was cataclysmic. Though she had reached a summit few have ever mounted, her agonisingly short competitive career was over. Maureen Connolly was just 19-years-old.

The world was ultimately denied a decade of dominance from the diminutive San Diegan. There would be no beautiful battles with her compatriot, the revolutionary Althea Gibson. No knocking Margaret Court down to size. No possibilities to compete against Chris Evert or Billie Jean King. Nothing.

After the premature conclusion to her tennis career, Connolly remained in the public eye, participating in single-set exhibition matches, imbuing the mythos of the ‘Little Mo’ relatively few ever got to witness professionally in person. In 1968, she co-founded the Maureen Connolly Brinker Tennis Foundation to assist players who couldn’t afford to compete nationally, an organisation that remains to this day. However, less than a year after its inauguration, Maureen Connolly lost her battle with cancer. She passed away on May 21, 1969, aged thirty-four years old.

“I’ve got everything I want,” she once said about her short career, “Everything I’ve had, I got through tennis. It gave me a terribly exciting life. If I should leave tomorrow, I’ve had the experience of 20 people.”