Boxing
Features
Ali's win over Cleveland Williams in 1966 is often regarded as one of the greatest performances in boxing history
Kieran Spratt
17:00, 14 Nov 2019

A bold statement from legendary broadcaster Howard Cosell, but you’d have a difficult time arguing against it if you’ve ever seen footage of Muhammad Ali’s dismantling of Cleveland ‘Big Cat' Williams, which happened on November 14th 1966.

There’s no doubt that his two wins over Sonny Liston, the rumble he had with 'Big' George Foreman in Zaire and the brutal third war with Joe Frazier in the Philippines are more significant chapters in Ali’s spellbinding career but in terms of sheer brilliance and elegance in one fight - nothing comes close to the show he put on at Houston’s Astrodome.

Two astronauts who called Houston home, James Lovell and Buzz Aldrin, were making headlines around the globe aboard the Gemini 12 spacecraft at the same time - on that night though, that didn’t matter.

Attention turned to the ring and 35,460 people showed up on the off chance they’d see Ali finally get shut up.

The fight was Ali’s seventh defence of his heavyweight crown and, more significantly, his first on US soil since he famously uttered: “I ain’t got no quarrel with them Viet Cong.”

America really had made Ali public enemy number one at this point. Some were angered by his decision to become a follower of the Nation Of Islam (and subsequent refusal to fight in Vietnam), some were upset by his motor mouth and, sadly, many people had a problem with the colour of his skin.

At 33, Cleveland Williams was on the decline and hadn’t been entirely the same fighter since being shot in the gut by a policeman’s revolver two years prior. He was a threat though, and some truly believed Williams had at least a puncher’s chance of being the first man to beat ‘The Louisville Lip’.

What followed, however, was one of the greatest performances from any man in the history of boxing. 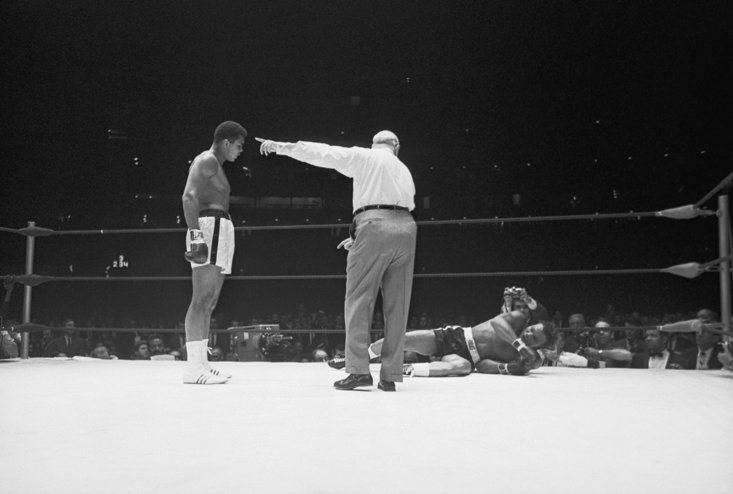 Boos flooded the stadium as Ali made his way to the ring - if it affected him at all, you wouldn’t have been able to tell.

He opened the fight by dancing around Williams in typical Ali fashion. Hands dropped to his side, daring Williams to hit him, he picked him off with snapping jabs any time he dared come close.

The second round saw Williams hit the canvas three times and he went down again in the third.

Sixty seconds into that same round, referee Harry Kessler was forced to end the fight and rescue the helpless ‘Big Cat’.

This was Muhammad Ali at his absolute prime. Five months later he was forced into boxing exile by the US Government for three years.

Yes, many great nights and bigger wins were still to come in Ali’s glittering career, but it’s crazy to think the world never really got to see 'The Greatest' in his prime after this fight.

More
boxing
Five Unmissable Big Screen Boxing Masterpieces That Aren’t Rocky...
Like almost no other sport, boxing is tailor-made for the silver screen. There’s something in [ ... ]
us-sports
The Luckiest Man On Earth: When Lou Gehrig Bid A Fond Farewell...
In the Friends episode, The One Where Old Yeller Dies, the character Phoebe Buffay (Lisa Kudrow)  [ ... ]
motorsport
Why NASCAR Maverick Wendell Scott's Battle With Bigotry Is As...
It is less than two weeks after the assassination of John F Kennedy. On the dirt oval at the Jacksonville [ ... ]
sports
From Daring Sea Rescues To Shunning Hitler: The Greatest Acts...
Nothing warms the cockles and brings a lump to the throat as seeing, hearing or regaling acts of sportsmanship [ ... ]
football
Sun, Sand And Bicycle Kicks: The World Of Beach Football Deserves...
The dying minutes of the game, down one goal. Former Liverpool midfielder Jamie Redknapp composes himself, [ ... ]
boxing
From Hammering Holmes To Blitzing Berbick: Mike Tyson’s Five...
With a boxing comeback in the pipeline, a hugely popular podcast and a 400-acre cannabis ranch opening [ ... ]
boxing
Cassius Clay vs The United States: The Greatest Fight Of Muhammad...
On June 20 1967, it took an all-white jury just 21 minutes to find Muhammad Ali guilty of draft evasion. [ ... ]
boxing
Assault In The Ring: The Dirtiest Boxing Match In History
On June 28, 1997, Mike Tyson and Evander Holyfield shared arguably the most infamous night in boxing’s [ ... ]
sports
The Sportsman Interviews Anthony Curcio, Football Player And...
Anthony Curcio is the world’s nicest bank robber. Friendly, talkative and generous with his time, [ ... ]
football
From Van Basten's Volley To Müller Magic: When The Olympiastadion...
It has been 15 long years since a football was kicked at the Munich Olympiastadion in official club [ ... ]
tennis
History Makers, Record Breakers And Pimms: Why Wimbledon Is...
Weep in the realisation that this should have been the week of Wimbledon, arguably the most anticipated [ ... ]
boxing
From Knocking Out A Horse To Missing Gold Medals: Five Of Boxing's...
Boxing has had its fair share of pieces of folklore since the introduction of the Queensberry Rules, [ ... ]
boxing
Joe Louis, The Third Reich And The Most Politically Charged...
On June 22, 1938, with the world on the brink of war, two boxers from opposite sides of the Atlantic [ ... ]
motorsport
Fighter Pilot, Racer, Transgender Pioneer: The Brave Life Of...
Robert Cowell was naturally left-handed but forced to use the right at a young age. The child of a decorated [ ... ]
boxing
Blood, Guts And Determination: Remembering Lewis And Klitschko's...
After 44 fights, 41 victories, 32 knockouts and three heavyweight championships, on June 21, 2003, Lennox [ ... ]
boxing
The Brawl In Montreal: Sugar Ray Leonard’s Rude Awakening At...
Four decades ago, when the ink had dried on Sugar Ray Leonard’s contract to face a Panamanian [ ... ]
football
The Danish Club Giving Locked Down Fans The Ultimate Virtual...
English football fans got their first taste of the ‘new normal’ this week as the Premier [ ... ]
mma
Prevention Better Than Cure - Confronting Head Trauma In MMA,...
Oh, the ignominy. ‘Baby’ Jay Dee ‘The Prodigy’ Penn, an inspirational martial [ ... ]
sports
From Keano Vs Big Mick To Chicken Wing-Gate: When Players And...
The wonders of the modern world: the Taj Mahal; Kiyomizu Temple; Fenway Park. The home of the Boston [ ... ]
football
Henry, Rodgers And Klopp: Remembering Liverpool’s Love Affair...
“We're here to win,” declared Mr. John W. Henry, in November 2010.  The Liverpool [ ... ]
golf
Flying Kicks, Epic Insults And Hilarious Advice: The Very Best...
“He is who he is. You can ask him about anything and he’s never going to short-change anybody. [ ... ]
motorsport
James Hunt: The Motorsport Maverick With The Playboy Persona
James Simon Wallis Hunt was born on August 29 1947 in Belmont, Surrey. The seventh British man to win [ ... ]
football
The Wrath Of Oliver Kahn: Germany's Greatest (And Angriest)...
'Der Titan'. 'Vol-kahn-o'’.  In order to get on his good side, we’d [ ... ]
sports
From Babe Ruth To Canadian Icons, The Five Priciest Pieces Of...
On June 19, 2019, a rare game-worn shirt from the Sultan of Swat himself, Babe Ruth, sold for an eye-watering [ ... ]
us-sports
Shoes, Rings And Billions: Michael Jordan's Chicago Bulls Revolution
On June 14, 1998, Michael Jordan won his final NBA Championship with the Bulls. Six months later, he [ ... ]
sports
Meet The Man Who Climbed Everest, Partied For A Week, Then Climbed...
There’s nothing normal about Nirmal Purja. After realising that the record time for conquering [ ... ]
football
Stadiums, Prodigies And No Diana Ross: Why We Can't Wait For...
On the surface, 2014 wasn’t much different to today’s world of 2020. There was a space exploration [ ... ]
us-sports
Phil Jackson, The NBA's Zen-Master And Its All-Time Greatest...
“Not only is there more than life to basketball, there’s a lot more to basketball than basketball.” [ ... ]
motorsport
Mike Hawthorn, Le Mans '55 And The Deadliest Season In F1 History
In the 1950s, across the world of motorsport, 103 drivers met their death at the wheel. In the first [ ... ]
tennis
Emerging From The Shadow Of Chernobyl: How Sharapova Went Nuclear
“If Chernobyl never happened, my life would be very different. I probably wouldn’t even [ ... ]
This website uses cookies
Cookies help us and our partners provide statistics. By browsing this website, you consent to the use of cookies in accordance with our Privacy Policy and Cookies Policy.
Accept & Close