The Olympics have provided a springboard for many an amateur boxer since the sport’s introduction at the 1904 Games in St. Louis. Returning home after plundering gold from foreign shores usually puts a fighter on a fast-track through the paid ranks - wider attention, bigger fights and the most lucrative pay days await any successful Olympian should they play their cards right.

Even with a boxing gold and all the publicity and fame that comes with it, it takes years to build up a prospective fighter, even with the foundation of a supreme amateur pedigree. Anthony Joshua had 16 fights before his shot at a title, Muhammad Ali had laced up professionally 19 times before his, and Mike Tyson had fought 20 bouts before he blitzed poor Trevor Berbick in 1986 to become the youngest heavyweight champion of all-time.

Now imagine how young heavyweight Leon Spinks felt. Just two years removed from his own Olympic triumph at the 1976 Games in Montreal and only seven fights into his blossoming professional career, he was being lined up to fight Muhammad Ali, arguably the biggest name to not only grace boxing but sport as a whole, for the biggest prize in sport: the heavyweight championship of the world.

Spinks, 24, and Ali, 36, were at entirely different spectrums on the boxing scale when the fight was announced and even Ali, usually bombastic in the build-up to one of his events, was uncharacteristically subdued. The match-up between young gun and veteran was unsurprisingly derided by the media and fight fans.

Spinks had made a sluggish start to life as a professional and a draw in just his sixth fight spelt disaster for the Missouri native - had it not been a case of complacency from ‘the Greatest,’ boxing might have missed out on one of the most shocking nights in its history.

Ali, waning physically and coming towards the end of his glittering career, was looking for an “easy fight” after sealing a unanimous decision win over the hard-hitting Earnie Shavers (considered by many as the hardest-hitting of them all) in the October prior - a fight so brutal it made Ali remark afterwards: “Earnie hit me so hard, it shook my kinfolk back in Africa."

Spinks represented that “easy win,” or so Ali thought. Spinks was, on paper, a very beatable opponent but also one that could generate buzz and revenue - Spinks’ 1976 Olympic heroics, of course, went in tandem with another boxer who had claimed gold and was destined for superstardom, Sugar Ray Leonard.

The fight was pencilled in for February 15 at the Hilton Hotel in Las Vegas and it would set up Ali’s 11th consecutive defence of the heavyweight title, his 20th overall and, ultimately, last.

Spinks, characterised by a gap-toothed grin, a memento given to him by boxing, had fought just 31 rounds in his entire career - Ali had fought one less than that in his last two fights and was unsurprisingly the 1/10 favourite going into the bout. Spinks was about to make the bookies look very foolish, though.

The ding of the first round bell was still buzzing through the February air when Ali put his back up to the ropes and employed the familiar ‘rope-a-dope’ technique that he’d adopted in his Rumble in the Jungle triumph against George Foreman in 1974 - this was not the ballerina-esque Ali of the years gone by, in his latter years the technique helped him wear down his opponents and keep his own energy reserves plentiful.

Once his saviour, the ‘rope-a-dope’ style that had worked in his favour so well previously, was to become his downfall. Where ‘Big’ George came unstuck, Spinks thrived and tore Ali to pieces.

Towards the middle of the fight, a sense of urgency seemed to lift the champion - Spinks was no mug and terrifyingly seemed to have more gas in the tank than Ali had thought possible. The champion showed fleeting reminders of the Ali of old in the tenth round, imposing his vastly superior talent on the novice challenger. 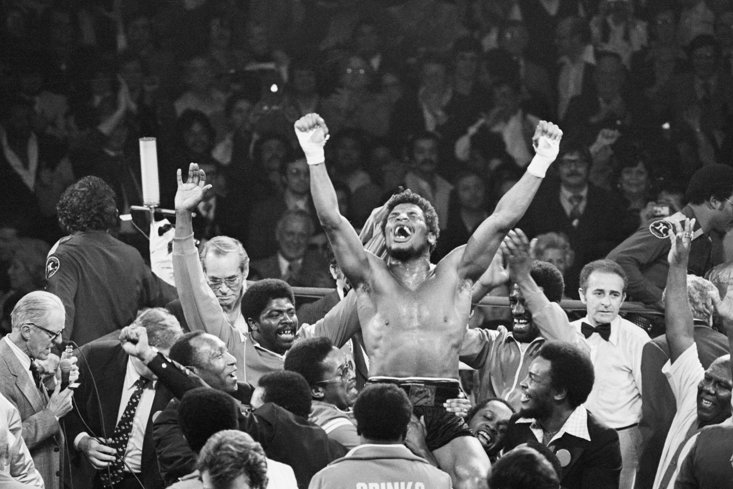 It wouldn’t last though and the younger man relentlessly continued to shock the on-lookers in the Hilton crowd. For the first time in a career spanning 58 bouts, Ali, usually so good at closing fights on top, was being outpunched and outworked in the championship rounds.

The 15th and final stanza, a classic three-minutes of heavyweight pugilism, started at a furious pace with the defending champion trying his best to turn back the clock - alas, with thirty seconds remaining it was the challenger who finished the strongest, rattling Ali with a stunning left uppercut and big right hand combination on the bell.

Following a split decision, a bizarre result given Spinks’ almost total domination, the man who’d not yet fought ten professional fights had just become the first and only man to take a world title away from Ali in the ring and had become heavyweight champion of the world in the shortest amount of fights ever.

"Naturally you want to go out with the title," Ali told CBS’ Bob Halloran after the fight. "It was a close fight. He was the most aggressive, so I imagine he won. For whatever reason he took it and you can’t take it from him. I did the best I could. He proved all the reporters wrong. They said he didn’t have a chance, but I knew he was a good fighter and that’s why I fought him. It’s just another experience in life."

A rematch was scheduled immediately and would take place in September of the same year at the Louisiana Superdome. Ali, of course, still had one more magical night left in his career and this time out, he was in better shape, brought improved tactics and, in truth, never looked like he’d lose, winning back his title by a unanimous fifteen-round decision and becoming the first three-time lineal heavyweight champion.

Spinks’ first night with Ali would remain the pinnacle of his career, unable to recapture glory of that magnitude again following his defeat in the second fight. His name will never be forgotten by boxing fans, though - on that night in 1978, he became the first heavyweight to shake up the world of boxing since Muhammad Ali himself.