‘Makin’ movies, makin’ songs, and fightin’ round the world’ was how South Park infamously immortalized the career of Hollywood actor Russell Crowe.

It’s been 20 years since he was propelled into the stratosphere with his star-making turn in the blockbuster Gladiator, a $500million behemoth of a movie that instantly became a cultural phenomenon and an Academy Award sweeper after the millennium had just rolled around. That relentless warrior element Crowe portrayed on screen earned him a Best Actor award. For better or worse, it’ll likely be the role he’ll eternally be associated with. The fact that it translates well for headlines in tabloid fodder for his notorious off-screen ruckuses doesn’t hinder that stigma.

He’s reportedly whacked a co-star, a producer, his own bodyguard, thrown a telephone into the face of a hotel concierge and once got into a fight in the bathroom of a London restaurant with the owner of the New Zealand Warriors rugby team, an altercation that had to be broken up by Grant Mitchell himself, Ross Kemp.

The South Park creators Trey Parker and Matt Stone didn’t hold back: “He fights his directors and he fights his fans, it's a problem no one understands. If there's two things he love it's fighting and Fight-in' Round The World!”

It’s appropriate to add sport to the list of Crowe’s passions, and for one particular team it’s proven extremely profitable if unable to curb Crowe’s endearingly fiery personality.

A club that had been in exile several years before, the South Sydney Rabbitohs have been transformed by the Oscar-winner combining his boyhood interest in the rugby league team with his Hollywood millions.

Crowe has been the co-owner of the Rabbitohs since 2006, an initial collaboration with Australian businessman Peter Holmes à Court, the son of the country’s first billionaire, and in the 14 years following Crowe has become even more of a regular fixture at both games and training sessions, sporting garbs with the Rabbitohs logo adorned. In 2014, the club finally ended their 43-year wait for a premiership. 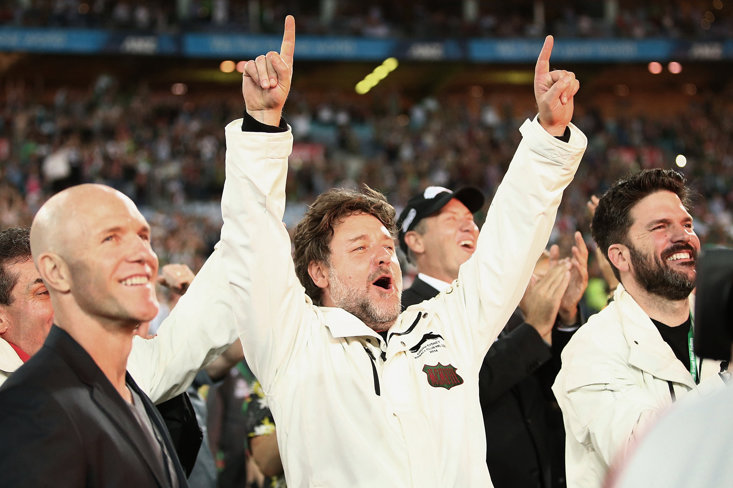 Russell Crowe loving life at the 2014 NRL Final in

"They’d fallen into a state of disarray and they were perennial losers,” he told broadcaster Simon Mayor in 2015, “So, nine years ago, I put my cheque book where my mouth is and bought the club."

After receiving death threats due to opposition for his takeover, Crowe reportedly used President Bill Clinton’s own private investigator to surveill potential perpetrators.  He helped wipe $7million worth of debt and determinedly pursued the acquisition of Sam Burgess, the Englishman becoming one of the greatest ever foreign players to ply their trade in Australia.

Burgess arrived in Sydney on his 21st birthday ahead of his debut NRL season in 2010 and would go onto play 182 matches for South Sydney, including the 2014 NRL Grand Final in which he was awarded the Clive Churchill Medal having played the entire game with a shattered cheekbone and eye socket. He remains the only South Sydney player to have won the award named after the Rabbitohs’ greatest player, ‘The Little Master’ Clive Churchill, and the only non-Australian to have ever claimed the award.

“To Russell - for making all this happen initially - I’ll be forever indebted to you. Your passion is infectious,” Burgess said in his sign-off message after being forced to retire from the sport in 2019, due to a chronic shoulder injury.

In January 2008, Crowe arranged the first professional rugby league game between teams from Australia and England to play each other in the United States of America. His band The Ordinary Fear of God of course performed the post-match function. In front of 12,000 fans at the University of North Florida in Jacksonville the Rabbitohs lost 24–26.

Their opponents however held some significance, for the Leeds Rhinos reflected Crowe’s allegiance with another certain city.

“I've been voted one of Australia's 50 national treasures. I've even had my face on an Australian stamp - the only non-Australian to do so, apart from the Queen, of course,” he once said.

Though Crowe has repeatedly been denied Australian citizenship despite having lived in Oz for over half a century, the Wellington-born actor can be reassured that he can always claim asylum on the far side of the world, in the heart of West Yorkshire.

Due to his outspoken affections for Leeds United Football Club, the Hollywood superstar would no doubt be welcome with open arms at the home of the Whites, Elland Road. 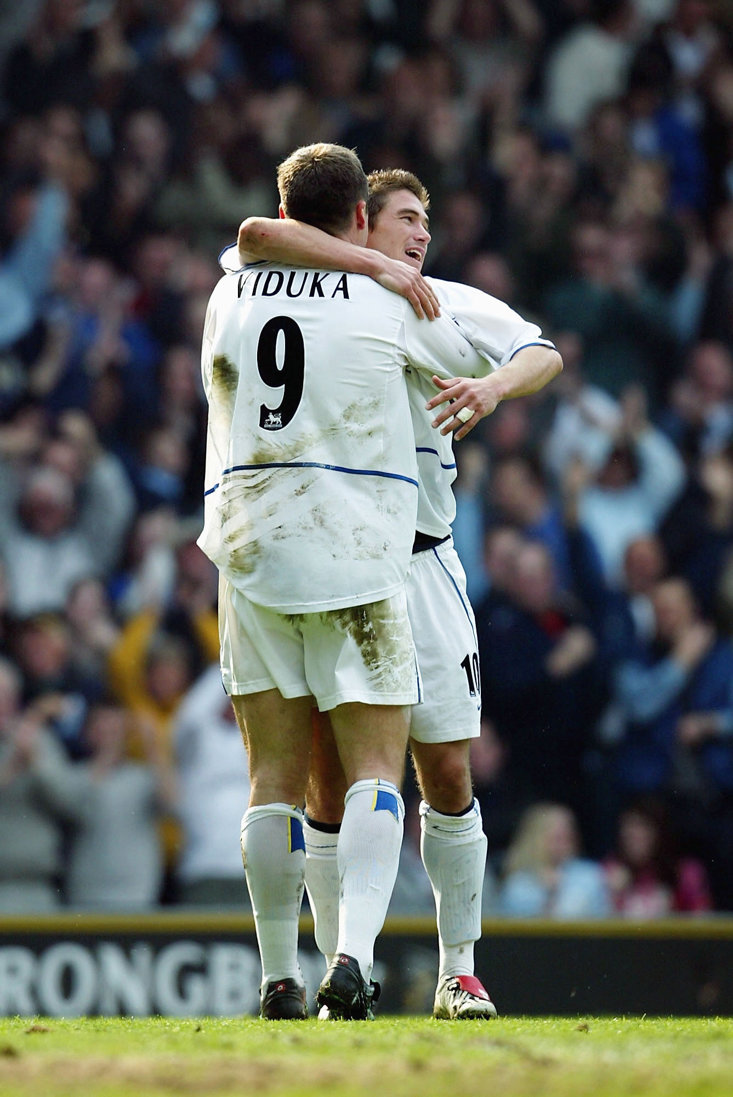 Crowe has been a narrator for the Amazon documentary covering Leeds’ 2018/19 season, consoled his fellow supporters after missing out on promotion in the playoffs (“Leeds... Next year. We’ll be right.”) and has even teased the possibility of him orchestrating a takeover of the club.

Speaking to Radio Five Live, Crowe divulged his unabashed support for the Championship side, stating that it stemmed from the highly-successful Don Revie era at the club in the 60s and 70s. "I followed Leeds since I was a little kid," he said, "I used to come home from sport in the afternoon, me and my brother, and watch Match of the Day. We're talking about a period of time in Australia when we had very few TV channels."

Crowe lent his recognisable dulcet tones, which has in the past given cinematic voice to Maximus Decimus Meridius and Jim Nash on the silver screen, to the Leeds-oriented docuseries ‘Take Me Home’ which tracked Leeds’ ultimately failed promotion push in head coach Marcelo Bielsa’s debut season: “This is a story that plays out in one of the most extraordinary seasons in this remarkable club's history," Crowe growls.

After a fan implored Crowe to buy the club, the actor asked his Twitter followers "Anybody else think this is a good idea?" an interrogative that sent tongues wagging and Whites’ hearts fluttering.

However, in a series of follow-up posts on the social media platform Twitter, Crowe explained his decision not to pursue a potential takeover. “I stand by my belief that LUFC is a massive opportunity. When my trusted associates tested the idea we found multiple potential...Economics tell the folks in my organisation we could smash this, but, I know the personal toll it takes, and I know without my actual hands on the wheel in Leeds I can't guarantee investors a return.

"I've loved Leeds all my life. I will always. I will not though steal anymore time from my children. It's that simple. Think about this, here's a hundred thousand who will march on together at least, stand up Leeds. Stand and be counted. #marchingontogether."

“It would give me nothing but pleasure to see that white army marching on together, getting back in the Premiership and being where they should be,” he once said.

If Leeds United channel that Gladiator spirit of their most famous fan and start punching just that little bit higher, it shouldn’t be an issue.

x
Suggested Searches:
Tyson Fury
Manchester United
Marcus Rashford
Lewis Hamilton
F1
Air Jordan
More
boxing
The Skipping, Sushi And 6am Starts Behind Canelo Alvarez's Billionaire...
Saul ‘Canelo’ Alvarez is not only one of the richest sportspeople on the planet, having [ ... ]
sports
Team GB Star Lutalo Muhammad's Guide To Sleeping Like An Olympian
Practice makes perfect, and Olympic athletes spend years honing their craft in pursuit of medal glory. [ ... ]
football
How Cheung Chi Doy Flew Solo To Become Hong Kong's Only European...
Sixty years ago, on 14 January 1961, two teams walked out at Bloomfield Road for a Saturday football [ ... ]
sports
The Top Motivation Tips To Keep Your 2021 Fitness Kick On Course
We are now getting stuck right into January and the new year, and with the first proper weekend behind [ ... ]
football
Remembering Josef Bican, The Only Footballer Cristiano Ronaldo...
It is the perennial argument.. Who is the greatest ever, is it Cristiano Ronaldo or Josef Bican? Ok, [ ... ]
motorsport
Lando Norris' Stunning McLaren 570S, £1.4m Track Test Cars And...
What were you doing at the age of 21? Finishing university, taking the first steps on your career ladder, [ ... ]
darts
Gerwyn Price Would've Quit Darts For A Wales Rugby Union Cap,...
Gerwyn Price dreamed of representing the Wales national rugby team. Life, though, works in mysterious [ ... ]
football
20 Years On, Is Eriksson's England Remembered For The Successes...
It was a time of relative success and front-page scandals. The FA’s decision to appoint England’s [ ... ]
football
Beckham's MLS Move Gets More Monumental Every Year, And Messi...
“I would like to play in the United States someday, it’s always been one of my dreams... [ ... ]
football
Cheers Bud, Messi Pays Respect To The World’s Best ‘Keepers...
Budweiser continues to celebrate Lionel Messi’s record-breaking 644th goal by sending every goalkeeper [ ... ]
football
No More Begging Bowls, Teams Like Marine Should Get 100% Of...
There was an inevitability about the 5-0 away win on the pitch, but Sunday’s third-round clash [ ... ]
sports
The Good, The Bad And The Downright Ugly, What Happens When...
Cardiff City Football Club is one of the most traditional organisations of a deeply traditional sport. [ ... ]
sports
Meet Milly Pickles, The Inspiring Para-Athlete With Five Million...
With five million likes and 204,000 followers on TikTok, and a brand deal with one of the UK’s [ ... ]
boxing
The Hard Work, Long Days And Big Meals Behind Tyson Fury's Incredible...
Tyson Fury has found solace in working out, discovering it is the thing that not only keeps him in shape [ ... ]
us-sports
How Kareem Abdul-Jabbar Brought The Lakers' Incredible 33-Game...
He towered at seven feet two inches tall. The sky-hook was in full flow. Once again the Los Angeles [ ... ]
motorsport
Biker Sam Sunderland Won't Let Covid-19 Kill His Dream Of Another...
It was back in 2017 when Sam Sunderland wrote his name into the record books, becoming the first Brit [ ... ]
football
James Rodriguez's Car Haul Includes £300k Worth Of Mercs, And...
James Rodriguez is an absolute Rolls Royce of a footballer and had Everton’s midfield purring [ ... ]
football
Heroes V Minnows, Legends V The Lowly, The FA Cup Third Round...
The magic of the FA Cup has been slowly dying, they say. There are the scattered fixtures and irritating [ ... ]
sports
The Diet Plans To Suit All Shapes And Sizes, From 5/2 To Fasting...
The New Year’s festivities have been and gone, and Christmas is a distant memory, at least until [ ... ]
motorsport
The Major Milestones Behind Lewis Hamilton's Relentless March...
Lewis Hamilton. His name is Lewis Hamilton. And there’s a million things he’s done. But [ ... ]
us-sports
11 NBA Titles And A 70% Win Rate, Phil Jackson Is The Best Coach...
There is simply no other who can touch him. He taught Jordan, Kobe, Shaq, Fisher, Pippen, Rodman. He [ ... ]
football
Big-Game Belief Proves City Are The Real Deal And United Are...
Manchester City are going to Wembley again. Manchester United are fielding questions about their readiness [ ... ]
boxing
Anthony Joshua Is The Selfless Sports Star We All Need In Our...
We need sport more than ever right now. We need it to distract, to entertain, to lift our mood and help [ ... ]
football
Thirst, Dedication, Craft, Bravery, Words That Define The Genius...
Even Gianluigi Buffon and Jan Oblak couldn’t stop Lionel Messi, but they got a little something [ ... ]
football
Long Live Le King! Why Bruno Fernandes Is Manchester United's...
Manchester United are flying. Ole Gunnar Solskjaer’s men have transformed themselves from mid-table [ ... ]
boxing
Canelo Alvarez, The Superstar Who Makes Golf Shirts And A Panda...
What would you spend your money on if you were one of the richest sportspeople on the planet? Saul 'Canelo' [ ... ]
boxing
Heroin, The Mob And A Left Jab From Hell: The Tragic Tale Of...
“One day they’re going to write a blues song about fighters. It'll just be for slow [ ... ]
sports
Baby Steps, Kindness And Motivation, It's Our Top Tips To Get...
You were doing so well. Lockdown had you in the best shape of your life. And then came Christmas. To [ ... ]
football
How Covid And Brexit Make This January Transfer Window A Whole...
The January transfer window is here once again but this year it is going to look pretty different with [ ... ]
tennis
Farewell To The Fab Four? Enjoy Federer, Nadal, Djokovic And...
Almost a century ago, four men entered their names into tennis folklore. A foursome from France, cutthroat, [ ... ]