Across his 24 seasons and over 900 appearances as a mainstay of the Manchester United squad, Ryan Giggs scored 161 goals as a Red Devil.

Of those, 160 will never be considered as important or as memorable as the one the Welsh Wizard scored on April 14, 1999.

As commentator Martin Tyler exclaimed, “The last thing either club needed was a replay”, with United now assigned to a gruelling calendar of at least two games a week between that mid-April and the end of May. The Red Devils had to commit forces on the Champions League fronts, and were also in the midst of a knife-edge Premier League battle for supremacy with Arsene Wenger’s Gunners.

“It was such a great Arsenal team,” Giggs later reflected, “It was probably the best team we played against domestically: power, pace, aggression, experience, skill. They had everything.”

This day, however, was all about the FA Cup, a trophy won by Arsenal the year before in their Double Triumph. The battle lines were now drawn between the two preeminent football forces in England to see who would play Newcastle United at Wembley on May 22.

Arsenal’s imposing defence of Nigel Winterburn, Tony Adams, Martin Keown, and Lee Dixon had gone an impressive 690 minutes without seeing a goal past them, before Giggs’ fellow alumni of the hallowed class of ‘92, David Beckham, scored a spectacular 22-yard effort past the diving David Seaman on 18 minutes. Beckham’s strike however was only the start of the entertainment on that Wednesday evening in the West Midlands. 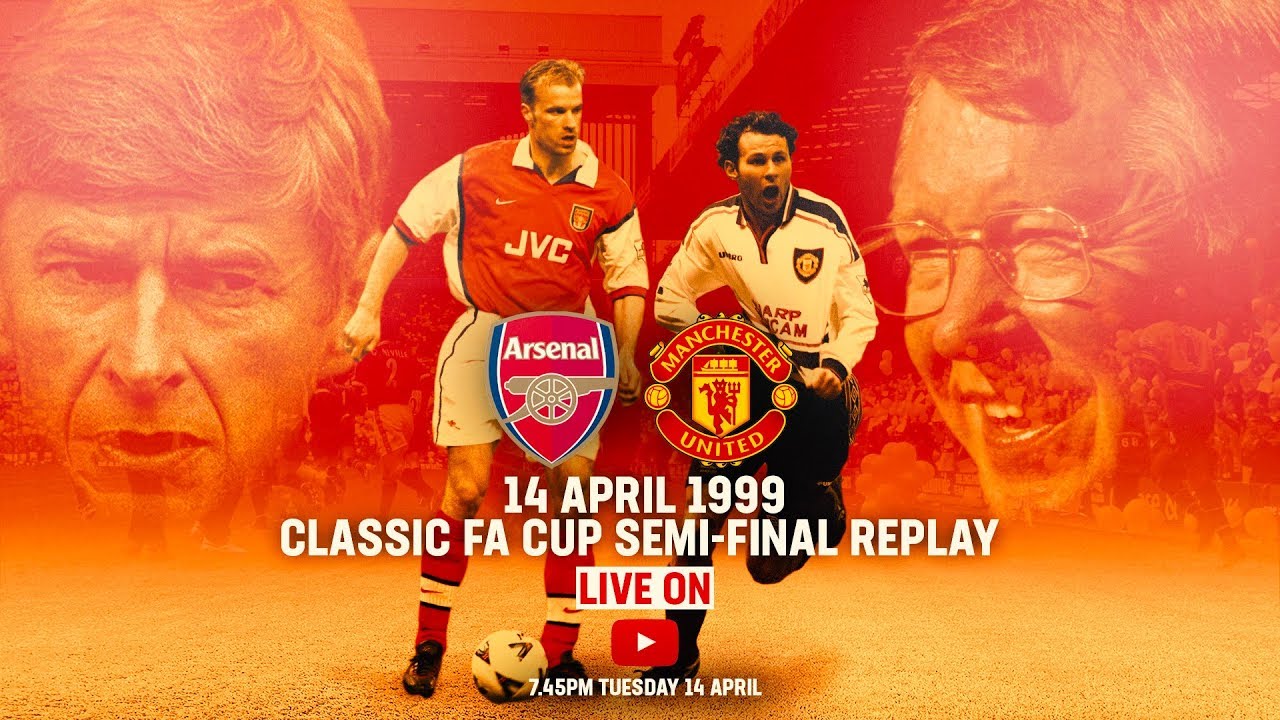 Just before the 70 minute mark, the knee of United centre-back Jaap Stam deflected his fellow Dutchman Denis Bergkamp’s equally-far-out shot into the back of his own net to level the score. Capitulation was threatening in Alex Ferguson’s pursuit of that vital piece of a potentially treble-winning season.

Luckily for United, Nicholas Anelka’s poach was ruled offside, but captain Roy Keane was sent off for a second yellow, and as the game progressed into extra time, those long seconds from close to 200 minutes of the combined semi-final play subsequently led Phil Neville to produce a rash tackle in his own box and provide Arsenal with the opportunity to take the lead from the spot.

“When I give [sic] the penalty away I remember thinking ‘Life’s over. I’m dead,” said Neville, “'I would rather die than this penalty go in.'”

Neville’s reprieve was provided by his goalkeeper Peter Schmeichel. The Great Dane denied Dennis Bergkamp, diving powerfully to the left and parried the Dutchman’s effort away.

On 61 minutes, the teams’ respective Swedes had been substituted, with Freddie Ljungberg coming off for Marc Overmars, and Jesper Blomqvist exchanged for Giggs. Arsenal right-back Dixon had dominated Blomqvist all game.

“We were in the dressing room beforehand and [Arsenal assistant manager] Pat Rice come [sic] in with the team sheet and went ‘Giggsy’s not playing! You lucky, lucky man!’”Dixon reminisced. After a tired hour, the defender looked over to the bench to see Giggs unzipping his training top, and groaned.

Deep into extra-time, with the game looking likely to head to the dreaded nail-biting penalty shoot-out, Giggs made the United contingent packed into Villa Park erupt, and allowed himself become a permanent fixture of the competition’s highlights package.

thesportsman
@TheSportsman
#OnThisDay in 1999: Ryan Giggs sent the Arsenal defence packing with one of the best @EmiratesFACup goals we've ever seen.
Oh, and the chest hair.
#MUFC @ManUtd

A wayward pass from Arsenal midfielder Patrick Vieira was latched onto by the then-25-year-old in his own half who heeded his manager’s instruction to ‘run at them… make something happen.’

And make something happen he well and truly did, producing one of the brilliantly dazzling, iconic individual moments ever witnessed of the world’s oldest association football competition, and within the last semi-final replay in the history of the FA Cup.

With speed, sublime skill, and deceptive body movement, the gliding Giggs ethereally negotiated and beat the flailing limbs of four bamboozled Arsenal defenders and headed straight towards David Seaman. Giggs launched a thunderbolt into the roof of the net. “It was the best goal I have ever seen,” said his teammate, Paul Scholes.

It’s hard to articulate how important Giggs’ winner was. Arsenal had pressured and pounded and it’s highly likely the advantage would have turned in the London club’s favour had it not been for the midfielder's moment of majesty.

A loss for Man Utd may very well have affected morale on that final league sprint to the finish, and had a knock-on effect for the Champions League. Exactly a week after the Arsenal game, United would have to travel to Turin for a gruelling second-leg against the behemothic Juventus.

Instead, sheer footballing perfection from Giggs, that removal of the shirt, that twirling jersey aloft, that Fangorn Forest of chest-hair, took Manchester United to the Twin Towers of the national stadium. A comprehensive result against Newcastle United and it was one down, two to go. Then followed one of the best, most impassioned performances in the club’s history, as the Red Devils turned over the Old Lady in Europe.

The first English club to reach the European Cup final in 14 years, their first in the competition in 31 years, and the first, and so far only, club in England to have achieved the continental Treble.