Sports
Features
In everything from boxing to gymnastics, there are heroes of the 1990s still performing
Jack Porter
16:41, 06 Jan 2020

Vince Carter continued to legitimise his “Half-Man, Half-Amazing” tagline over the weekend as he strode onto the basketball court and into the 2020s, becoming become the first NBA player to have produced a career spanning into four decades.

The 42-year-old has played for eight different franchises in his 22-year professional career, beginning with the Toronto Raptors and ending up at his current team the Atlanta Hawks, with whom he made NBA history this Sunday against the Indiana Pacers.

To highlight the significance of this moment, the youngest active player in the NBA is Detroit Pistons forward Sekou Doumbouya, who is currently 19 years old having been born on December 23, 2000. Carter's NBA debut came on February 5, 1999, in the era of Allen Iverson and Hakeem Olajuwon. Baby One More Time was topping the charts and Joe DiMaggio was still alive.

Whilst Carter’s peers have fallen into retirement, Carter courageously continues. In celebration, here are some other iconic sports stars the American can pride himself as standing alongside thanks to their similar longevity in their field.

There are few words adequate enough to describe Gianluigi Buffon. The man mountain - certifiably, undeniably one of the greatest goalkeepers of all time. Still between the sticks for Juventus - who he memorably followed down to Serie B in the mid-2000s - Buffon made his Serie A debut on Nov 19, 1995. To put this in perspective, Pierce Brosnan’s first foray as James Bond, Goldeneye, was five days away from being released in British cinemas. One of the players vying to take his mantle as Italy’s foremost goalkeeping export, AC Milan’s Gigio Donnarumma was still fou years from being born when Buffon premiered for Parma.

A World Cup winner with the Azzurri in 2006, the now 41-year-old Italian stallion has more records than a disc jockey; the longest streak without conceding a goal in Serie A history (974 consecutive minutes across 12 league matches), the most consecutive clean sheets in the Italian top tier (10), the most capped player in the history of the Italy national team, the fourth-most capped footballer of all time, and the most capped European international player ever. He is also set to break Paolo Maldini’s all-time appearance record this year. Furthermore, for 17 years Buffon held the record for the highest transfer fee for a goalkeeper following his €51m move from Parma to Juventus in 2001.

He also left Juve for Paris Saint-Germain, won the Ligue 1 title, and came straight back.

UEFA Champions League
@ChampionsLeague
💫 Buffon made his professional debut #OTD in 1995 💫
One of his greatest saves? 🤔
#UCL | @gianluigibuffon
905
9958

The Little Master can still enjoy his status as one of the greatest cricketers of all time. Despite his 5ft 5inch stature, India legend Tendulkar is a giant of a man who had a humongous career.

He made his Test debut on 15 November 1989 against Pakistan, aged 16, and became part of the furniture for the next quarter of a decade. In 2011, upon attempting to collect one of the missing pieces from his collection that had so far eluded him - the World Cup - compatriot Virat Kohi summed it up best, declaring that “Sachin Tendulkar has carried the burden of the nation for 21 years. It was time we carried him.” They did that, as India duly won the tournament, Tendulkar’s sixth and last appearance on that particular stage.

A true tennis champ who hasn’t let little things like pregnancy get in the way of certifying herself as one of the greatest players of all time. One behind Margaret Court’s all-time Grand Slam record (come on Serena, you’re so bloody close), the American’s first came in 1999 at the tender age of 17.

Williams became a pro at just 14 years old and in 1998 won her first match at a Grand Slam competition, beating Irina Spirlea of Romania at the Australian Open. The ‘99 US Open, however, was to be the first of her 23 triumphs as she defeated Martina Hingis at Flushing Meadows. Ten more followed in the first post-millenium decade, and a stonking 12 were added in the 2010s. The 38-year-old is hoping to make it #24 later this month in Melbourne, the site of her first slam match victory 22 years ago.

#AusOpen
@AustralianOpen
@serenawilliams We asked, you voted! Your favourite @serenawilliams #AusOpen win of the decade was 2017... What's even more incredible is that she was 8 weeks pregnant with daughter Olympia at the time!

While there are a handful of very notable boxers to have fought in five decades - Roberto Duran, Jack Johnson - Filippino firecracker Manny Pacquiao is the only pugilist to hold titles in four decades.

1998 marked the arrival of Pacquiao's first belt with an eighth-round knockout win against Chatchai Sasakul, which saw him procure the lineal and WBC flyweight titles.

Twenty-one years later, Pacquiao became the oldest welterweight champion in history at the age of 40 and also the first boxer to become a four-time welterweight champion by beating Keith Thurman, a fighter 10 years Pac-Man’s junior, in July 2019. Furthermore, the win helped to cement his status as one of the greatest boxers of all time, if not the very greatest. Pacquiao is also the only octuple champion in history having won titles in eight different weight classes. This he achieved in 2010 with a win over Antonio Margarito for the WBC super welterweight title.

Mind-bogglingly, Chusovitina’s first Olympics came all the way back as the Cold War was thawing, in 1992.

Take that into consideration for a moment.

In 2019 at the World Championships in Doha, Chusovitina was competing against the likes of Shallon Olsen and Simone Biles, who, it goes without saying, is young enough to be her university-graduated daughter. Furthermore, Chusovitina was showing her young rivals up by daring to attempt the death-defying ‘Produnova’ vault. Which she did.

Chusovitina has also performed routines on the floor to The Godfather and the Pirates of the Caribbean themes, and is a mother to a son born in 1999 - a year before Sydney.

Ladies and gentlemen, your new hero. 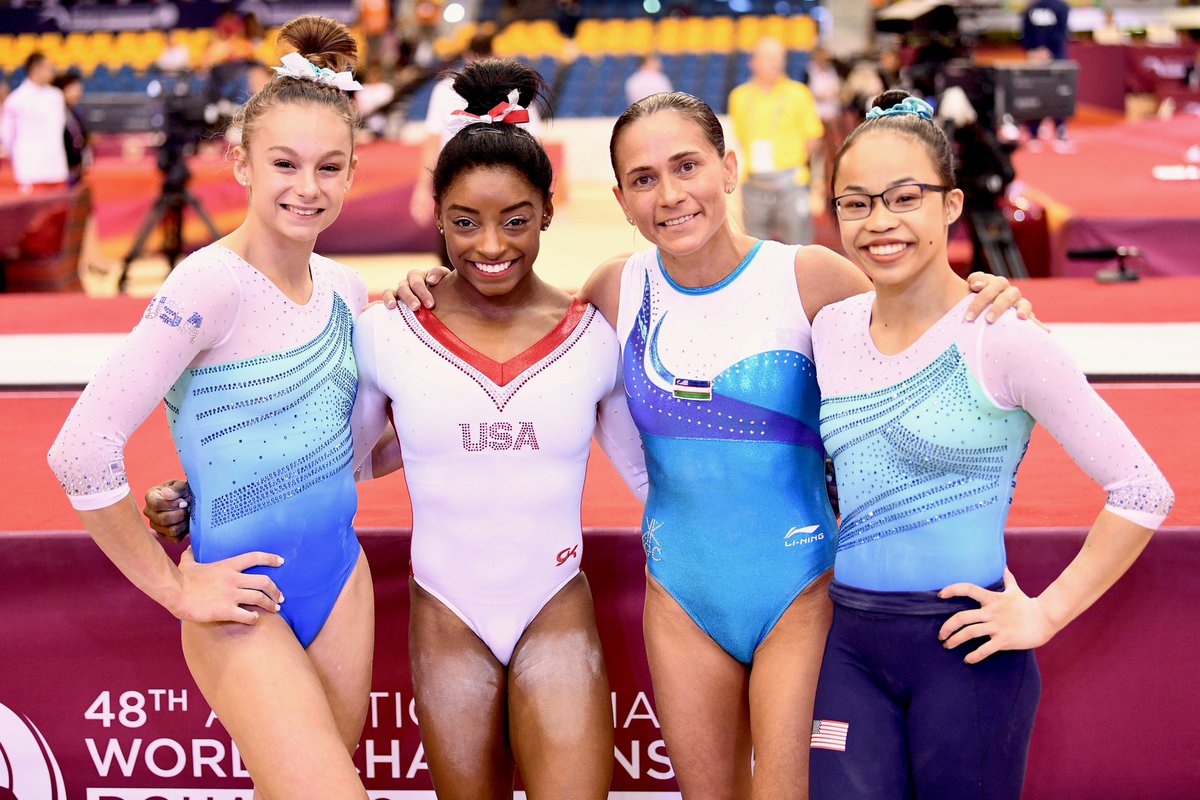 94
1560
More
football
David James Steps Up To Protect Perilous Grassroots Football...
“The club is the fabric, the life and soul of the community. Taking Maslow’s hierarchy of [ ... ]
golf
How Steaks And Shakes Fuelled Bryson DeChambeau's 'Bomb And...
He’s the coolest scientist since Breaking Bad’s Walter White, only he’s used his powers [ ... ]
football
Why You Should Still Have A Whole Lot Of Love For The League...
The League Cup needs some love. The unwanted and unloved fourth child of English football, without the [ ... ]
boxing
Born To Box: The Extraordinary Story Of Nipper Pat Daly
“They’ll laugh at you, son. Wait until you’re a little older.” It’s 1920s [ ... ]
boxing
Mia St. John - The Boxing World Champion Using Her Power For...
Mia St. John had a purpose in life. It was, in her own words, “to kick somebody’s ass”. [ ... ]
football
From The Ox To Dele Alli, Meet The Photographer Trusted By Football's...
Matt Gordon enjoys PlayStation with Liverpool’s Trent Alexander-Arnold, holidays with rising football [ ... ]
football
Robbie Fowler By Numbers: From L8 to Liverpool Legend
A ferocious storm straight from the heavens hit west London on Wednesday 22 September 1993. Craven Cottage [ ... ]
football
The Crazy, Continent-Crossing, Love Affair...Welcome To The...
5,031 miles. That's the exact distance that separates Aston in Birmingham from the Ghanain village [ ... ]
sports
From Kelly Slater To Serena Williams, The Athletes Stepping...
“We are facing a man-made disaster on a global scale.” Not our words but those of Sir David [ ... ]
football
Fenerbahce's Light Out Of The Dark: When Turkish Women Ruled...
Hearing the cry of ‘Women and children first!’ could understandably take you to that freezing [ ... ]
boxing
Finding Mike - All The Details So Far On Jamie Foxx's Tyson...
Mike Tyson is one of the most explosive and enigmatic sportsmen of all-time. His life has been one of [ ... ]
football
A Wonder Of The Footballing World: Celebrating The San Siro
The position as a modern-day Antipater would be unenviable if one was tasked with nailing down the Seven [ ... ]
boxing
Ken Norton, The Former US Marine Who Used A Self-Help Book To...
Not a soul in attendance, even in his adopted hometown, believed Ken Norton had a chance of beating [ ... ]
football
11 Points And Down In March: Derby County's Nightmare Premier...
It is the 39th minute at Pride Park in front of a roaring 33,000 strong crowd, the majority of whom [ ... ]
motorsport
184MPH On A Push Bike... Meet The Fastest Cyclist In The World
The scorching Bonneville Salt Flats of Utah. As far as the eye can see, the view is only a two-tone [ ... ]
football
Thanks Gaffer - The 19th Century Moniker Modern Footballers...
If you watched ‘The English Game’ on Netflix recently, the countless differences between [ ... ]
football
We’ll Raise Your 27-0 And Give You 31-0, The Biggest Hammerings...
Winning provides happiness. Losing provides wisdom. In football, it takes two sides to create history, [ ... ]
football
Joaquin, We Salute You - Real Betis Royalty Who’s Reigned For...
Eight years. That’s the average length of a professional footballer’s career. Average. Joaquin [ ... ]
football
From The Work Of Art To The Throwback, The Season's Best New...
Leeds United were the first. That’s right, the Elland Road club who are back in the Premier League [ ... ]
tennis
From Stockport Rebel To Hollywood Favourite, How Fred Perry...
“I’m a great believer in trying to look the part. It’s a fetish with me.” For [ ... ]
football
Germany Vs Bayern? Brazil Vs Exeter? These Are The Best Club...
The club versus country row has increased this century, with the soaring popularity of the Premier League [ ... ]
football
Bill Shankly - The Teenage Miner, Midfield Star And Managerial...
Bill Shankly wasn’t only a great football manager, you know. He was one hell of a player too. [ ... ]
tennis
Why John McEnroe Epitomises The Best In Tennis And How It Can...
It’s nearing the end of the long, hot summer. The year is 1984. You’ve got your Member’s [ ... ]
football
Toffees, Trophies And T90s: Rooney’s Football Journey Through...
Wayne Rooney’s right foot was explosive, like a traction engine as Alan Partridge would put it, [ ... ]
tennis
Remembering Little Mo, The Grand Slam Winning 'Killer In Pigtails'
No other player has arguably had such a profound effect on tennis, in such a tragically short space [ ... ]
cricket
It Pays To Be Patient: The Sportsman’s Ode To 140 Years Of Test...
Can you imagine trying to sell Test cricket to the public in 2020, if it was a new invention? Given [ ... ]
boxing
First Glimpse Of Greatness: When Ali Fought Fear With A Parachute...
As he sat there on bended knees in the middle of the aisle, the beads of sweat rolling down his forehead [ ... ]
boxing
The Newport Rocky: The Best British Boxer You’ve Never Heard...
Before David Haye and Tony Bellew, there was David ‘Bomber’ Pearce. A British cruiserweight [ ... ]
us-sports
Vince Lombardi: NFL Legend, Pursuer Of Perfection, Champion...
His name adorns American football’s ultimate prize thanks to his outstanding record as a coach [ ... ]
tennis
Serena Williams Doesn't Need The Grand Slam Record - She's Already...
There is no benefit in asking when it will end, just be glad that it’s happened. And still happening. [ ... ]