Winter Sports
Features
The race in Antarctica is the most extreme of tests
Jack Porter
16:00, 07 Nov 2020

“My body was trying to break down,” The Queen of the Desert says, “But more than anything, due to climate change, the temperatures were warmer than they had ever been. Around 30 degrees Fahrenheit. Zero degrees Celsius. And that’s ‘warm’.”

It is an apparently endless wilderness, a near-immeasurable landscape, the cruellest continent of them all. When it’s not ‘warm’, temperatures are, on average, as low as -49 degrees Celsius in the winter months. Antarctica: the driest, the windiest,  and of course the coldest on the planet. You aren’t attempting a mere 26.2 miles. You are pursuing 155, about the distance from London to Manchester, your body heat generating the sheer antithesis of what the elements are trying to inflict upon you.

Welcome to The Last Desert.

For the elite runner the watermark of the marathon is merely the beginning of the journey. As Antarctica’s only multi-stage footrace, this is the real test.

And Jax Mariash, whose achievements have earned her the aforementioned Queen of the Desert tag, can’t get enough of it. Even though climate change has made conditions more treacherous, the thrill of racing around the polar desert remains the same.

“It’s magical,” Jax tells The Sportsman, “It’s so beautiful. You’re surrounded by white and ice, in a space where you just feel so small on this vast, magical planet. On some days, the weather would change four times. You could hear ice falling and avalanches. It’s like nothing you’ve ever seen before.”

The Last Desert is one of four races in an ultramarathon series that the toughest runners put themselves through in order to complete a ‘Grand Slam’ of the toughest terrain trails. Designed and organised by Racing The Planet and founder Mary Gadams with the aim to take runners out of their comfort zone in the greatest extremes the planet can muster, the series also comprises the Gobi March in Mongolia, the Atacama Crossing in Chile, and a race across the Namib Desert on the continent of Africa.

But The Last Desert is a different beast.

All of the races in the series are 250km, or 155 miles, and in most cases they’re spread over six races in seven days: the adventurous participants are virtually required to undertake a marathon a day, and a double-marathon on one of the days, in order to fulfil the required distance for completion. 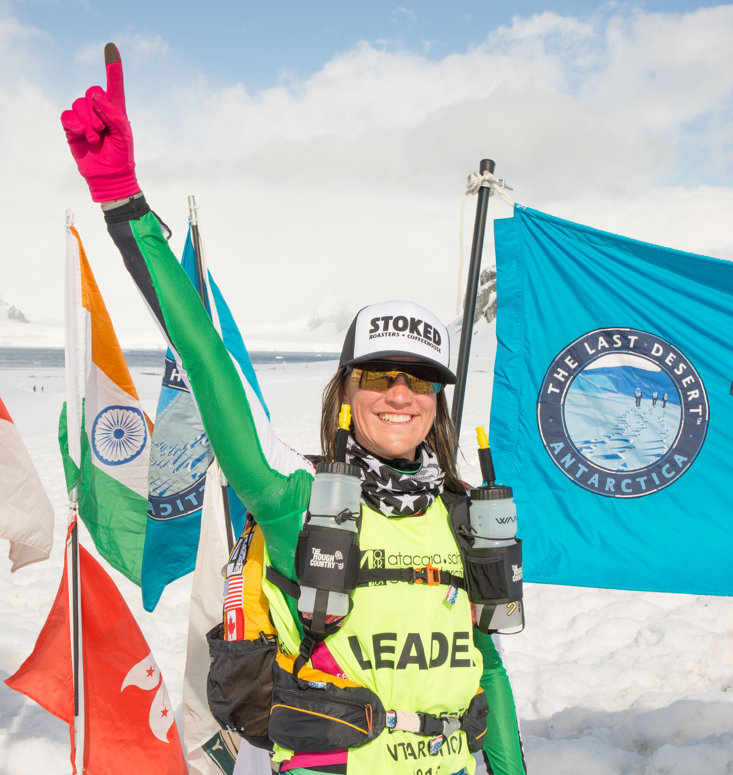 The first races were held in 2003, with the Last Desert being added to the calendar three years later in 2006. Now held bi-annually, its popularity has grown at every single event as its notoriety has increased. There are at least 30 different countries represented, the youngest competitors in their twenties, the oldest always in their sixties at least, including everyone from students to CEOs.

Jax’s love of running started when she was five years old. It eventually brought her to The Last Desert in 2016, the last hurdle of her ultimate running goal. She is now one of the top ranked and most decorated females in self-supported stage racing in the world.

Given that Antarctica is an even more extreme location than the other deserts, the route follows a different procedure than the other events in the Grand Slam. Competitors are picked up from the very southern tip of Argentina, with a ship taking them across Drake’s Passage on a 30-hour journey. A plane would obviously be a lot faster but is more susceptible to bad weather. Journeying by sea, however, poses its own problems.

“To go through the motion sickness you feel on that journey and then the next day you’re up and running,” says Jax, “That in itself, to go through a really rough sea and then put on your body 100km, is a massive strain on yourself. 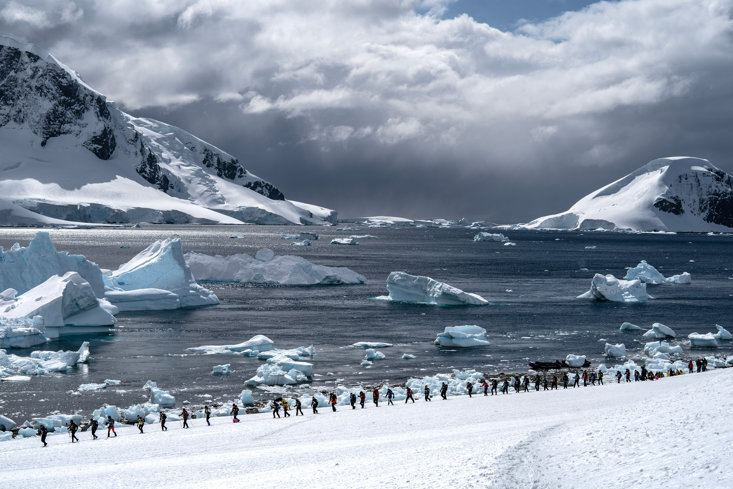 THE COMPETITION TAKES PLACE OVER SIX RACES IN SEVEN DAYS

Safety is the number one concern and there is always going to be some form of risk. Racers can overestimate their own ability, pushing themselves further and harder than they should, more than they can manage, which exacerbates medical problems. Respect for the environment is taken extremely seriously. One slip, one crack in the ice sheet, and it’s not just the run that’s over.

“Of course in Antarctica there are even more risks,” event director Sam Fanshawe tells The Sportsman, “We have experts checking for cravasses on the course and people are carrying everything they need.”

Racing The Planet requires the participants to have some form of experience before heading South and to compete in The Last Desert prospective runners must have completed at least two of the other desert races. “People can underestimate this race and we want people to understand and respect the concept,” Sam explains, “It’s a much more challenging race, mentally. Because the conditions are so different, it could be that you finish a stage, you have four hours rest, then you’re up at 3 a.m. for the next. Then 3:00 arrives, and weather or ice conditions could be so bad that you cannot land, so you play the waiting game, and you become dependent on the climate and circumstance. And that’s even before you race. 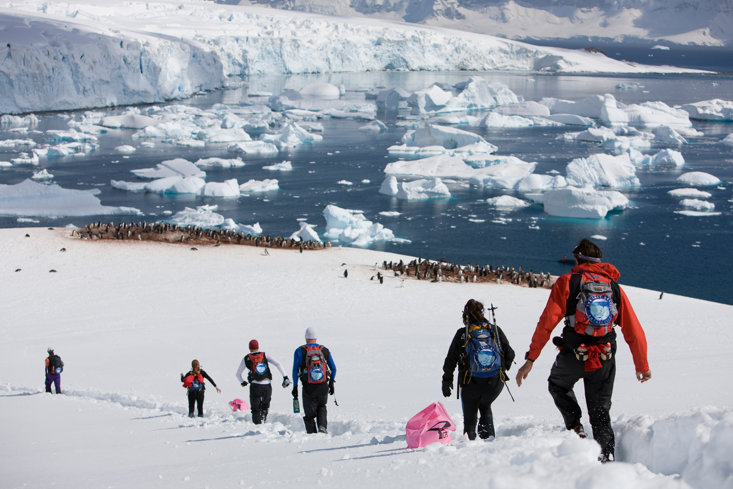 Because there is virtually no recuperation time, making sure you can hydrate and eat correctly becomes of the utmost importance, as once you get behind on either of those it’s hard to catch up. Exhaustion is the most insufferable companion, exacerbated by the environment that provides the strangest, most strenuous stage for the sport, with its most ill-designed track for the terrain-runner.

“That intense sun on the white snow would turn it to mush, making it super slushy. As the race leader, you would have to take the honour of making a track for the others,” adds Jax. “That was hard itself, working through the terrain and it being soft. If it was icy it would have been a lot more runnable.

“Because you’re dealing with snow, it starts to tire and wear away at the tendons in your feet. My appetite was screwed and every night when I came back to the boat I was just done.”

Though so much running is involved, it is hard not to become distracted upon the realisation that you are racing in one of the most remote places on Planet Earth.

“Antarctica is amazing,” Sam says, “It’s honestly like no other place I’ve ever been before. It’s so pristine, and the wildlife - it’s like being in a natural zoo! It’s so unique. It’s hard to explain a place like Antarctica.”

The Last Desert truly is a race like no other. And if you were wondering... yes, the penguins have right of way!

The next race is due to be held in November 2021, and more information about The Last Desert can be found here.