Rugby
Features
Silverware of all shapes and sizes will be handed out over the next couple of months
Ali Stokes
06:56, 31 Jan 2020

So who’s ready for the Six Nations Championship? What’s not to love about a competition which will see eight trophies awarded over a six-week period featuring 15 games?

While the obvious aim for the competing countries is to lift the Six Nations Championship Trophy itself, there are plenty of other cups and commemorative accolades to be handed out between now and the end of March. And that doesn’t even take into account the metaphorical wooden spoon for the bottom-placed side or the silverware-free honour of completing a Grand Slam.

But for those who have ever wondered why teams play for the likes of the Calcutta Cup and Triple Crown or ask themselves what on earth the Giuseppe Garibaldi Trophy is all about, The Sportsman brings you a handy little guide...

The most famous of the trophies awarded prior to the tournament's culmination, the Calcutta Cup is contested by England and Scotland, and is famously forged from Silver Rupees.

The Rupees themselves came from the final funds available to the Calcutta Football Club. Founded in 1873, the club joined the Rugby Football Union the next year, but once the popular free bar was discontinued there was a stark drop in membership numbers. Go figure!

With numbers dwindling, the remaining members opted to disband, etching the club’s name in history by melting down their remaining funds and presenting the trophy to the RFU in 1878.

The Triple Crown’s history long precedes the 14 years in which an actual award has been handed to the winner. Formerly known as the ‘invisible cup’, the trophy is contested by England, Ireland, Wales and Scotland and is bestowed upon the home nation that beats all three rivals.

In 1975 a frontrunner trophy was fashioned by a retired English miner, forming a coal base with insignias of the four nations in each corner, topped by a crown. This fan-made prize now resides in the Rugby Museum in Twickenham. In 2006, title sponsor the Royal Bank of Scotland commissioned today’s trophy. 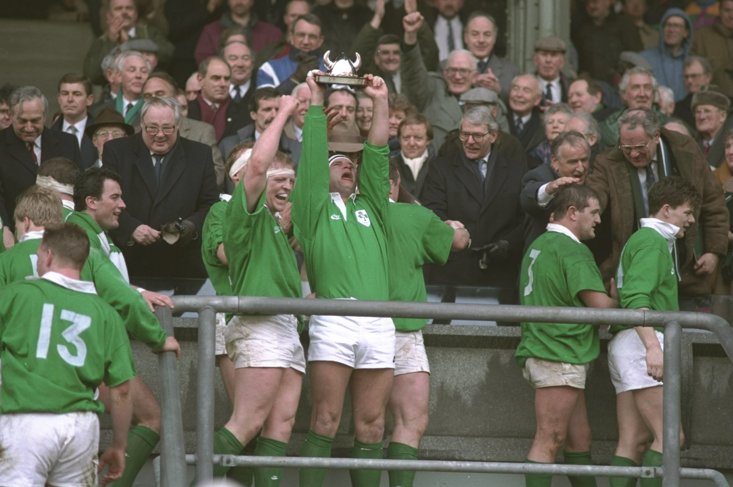 Founded in 1988 during the Five Nations, the Millennium Trophy is contested between England and Ireland, and was originally inaugurated as part of Ireland’s millennium celebrations.

The most interestingly wrought of any trophy up for grabs during the Six Nations, the Millennium Trophy is shaped like a Viking helmet atop a circular wooden base. The unique-looking piece of silverware has been won by England 19 times, with Ireland claiming 13 victories. Eddie Jones’ English side are the current holders.

Founded a year after the Millennium Trophy, the Centenary Quaich is a shallow bowl with handles on either side and currently belongs to the Irish, who contest the award with Scotland each year.

A ‘Quaich’ is a Celtic drinking vessel, derived from the Gaelic word ‘cuach’. One can only imagine quite how many libations this particular trophy has served Scottish and Irish lips over the last 31 years…

Hitting its teenage years during the 2020 Six Nations, the famously named Giuseppe Garibaldi Trophy is not, in fact, named after one of Britain’s most famous biscuits – but that would have been inexplicably cool, right?

Giuseppe Garibaldi was an Italian general and patriot who lived between 1807 and 1882, and contributed to the unification and the creation of the Kingdom of Italy.

The trophy itself - which is handed to the winner of the annual France v Italy clash and, fittingly, looks like a giant metal number six - was first created and won in 2007, designed by former French international and professional sculptor Jean-Pierre Rives. Italy have won it twice, in 2011 and 2013.

BBC ScrumV
@BBCScrumV
Wales and Scotland compete for the Doddie Weir Cup tomorrow, now hear from the Scottish legend on what the occasion means to him 💪
385
1602

The newest and least well-worn by dehydrated players, the Doddie Weir Cup was commissioned in November 2018 in honour of former Scotland and British and Irish Lions second row George Wilson 'Doddie' Weir and to raise awareness of motor neurone disease, of which Doddie had been diagnosed in 2017.

A popular figure within rugby circles, Weir is a man whose speeches, whether comical or earnest, hold a room in a manner no Six Nations defence will ever rival. 2020 will be the third time the cup has been contested between Scotland and Wales overall and the second occasion it has been part of the Six Nations furniture.

Those Scots, they love a trophy, eh? Not content with the Calcutta and Doddie Weir Cups, Scotland also contest the Auld Alliance Trophy with France, and have done so since 2018.

Commissioned in the centenary year of the end of World War I, the trophy commemorates the Scottish and French soldiers killed during the conflict. The last Scottish and French captains named before the start of the First World War, Scotland’s Eric Milroy and France’s Marcel Burgun, were among more than 50 players to lose their lives during the Great War.