Motorsport
Features
The Aussie driver has multi-faceted approach to getting in shape
Jack Porter
18:00, 10 Nov 2020

He’s the Formula One journeyman with a perpetual smile, but Daniel Ricciardo is the possessor of a soul of steel. About to complete a two-year stint with Renault, McLaren is the next destination for the Australian and they'll be about to receive a man dedicated, driven, and - as he will be unafraid to tell anyone within earshot - dashing.

A slave to the session, Ricciardo should be considered the archetypal athlete, and he’s not all about the laughs. As much as he appears amiable and affable, he is an athlete of the highest order. There’s the grind as well as the grin, and his intense fitness regime is testament to that...

This year Ricciardo holed himself up in a farm in western Australia and, with long-term performance coach Michael Italiano, devised a gruelling workout in the new environment. He trained all but one rest day whilst, in his words, getting creative and changing up exercises to avoid monotony. His ‘farmer's circuit’, he would inform Men’s Health, comprises five exercises, 45 seconds on and 45 seconds off, over a total of 30 minutes of training time. Think that Rocky IV training montage in backwater Oz rather than the shivering Soviet.

Exercises include sledgehammer slams (simply smacking a big truck tire with a sledgehammer) for his core upper body workout, tyre flips in order to use his quads, glutes and lower back, strengthening his posterior chain - vital for anyone entering the F1 cockpit. Then there’s thrusters, picking up logs, and squatting into an overhead press, to work his anterior delts and his chest, Zercher walks (performing a stone deadlift by placing the object between the feet) and sled dragging with chains, forcing the glutes to do a lot of the hard work.

Eating All The Right Things 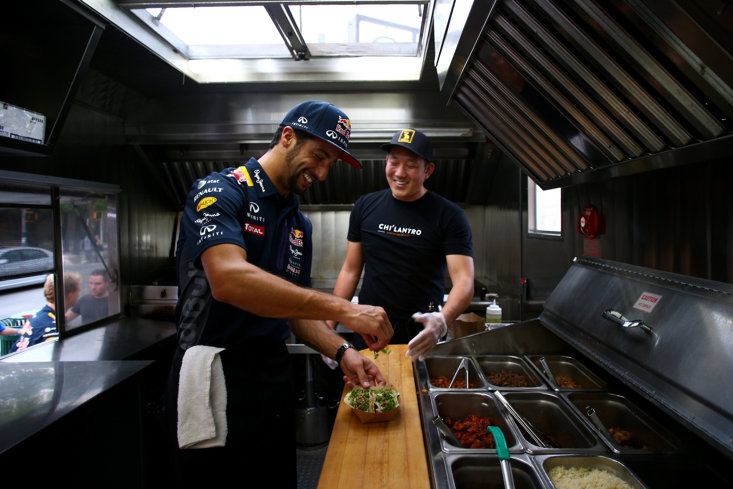 Health, the old adage goes, begins in the kitchen, and Ricciardo has certainly taken heed. Well before the champagne-sipping starts, the 31-year-old makes sure his body is tanked up with calories and content to burn. It’s far from a problem that he’s partial to the veg. “I like a good protein and fat breakfast, so avocado, bacon, eggs and some veggies,” he informed the Herald Sun, “I try to get my veggies in early as well, so try to get some spinach or kale in there. I might even eat raw carrots or capsicum.”

Learning From UFC And Boxing

Formula One isn’t the sole interest for a speedster. Ricciardo has declared his love for both boxing and mixed martial arts. “I love UFC so I’ll try and take some techniques or warm-up things from them,” he’s said in the past. “Those guys are complete athletes, so there’s a lot to learn from a mixed martial artist.” He has declared his fondness for boxing drills and has shared footage from his training inside the ring. 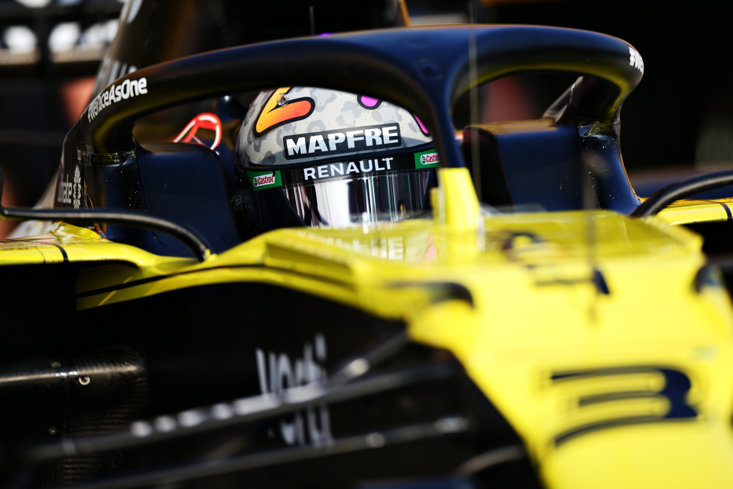 This is all about coping with the G-Force. Drivers must have strong necks, core and legs, specifically to cope with all the elements being thrown in the car. Rotations and repetitions of head twists and head nods may seem monotonous and mundane but are most vital, improving the scalenes and sternocleidomastoids.

Consider how much you see those helmets dart around in the cockpit on any given raceday, and you’ll appreciate just how much preparing the neck for such a workout becomes key for a driver.

Endurance is an oft-overlooked aspect of the F1 athlete’s armoury. Confined and cramped in the cockpit, drivers can lose up to three kilograms in weight in one race due to the strenuousness of the activity. In the gym it’s strength, but outside Ricciardo switched up the pedals to help him cope with long races. “Cycling’s great for endurance,” as he told Red Bull, “I’ll vary how long I ride for, but two and a half hours is a good, solid endurance ride.”

And he’s also claimed, “I can mountain bike for four hours and it won’t even feel like a workout because it’s fun and you’re in a new environment, like a forest or somewhere, so that’s cool.”