Perhaps best known in day-to-day life for stirring winter broths or whacking younger siblings while mum isn’t looking, the wooden spoon is a utensil that has far outstripped the limitations of its millennia-old inception.

Sporting parlance has long adopted the wooden spoon, demoting it well behind the wooden knife or fork, apparently. Most sports fan can tell you that the Wooden Spoon is, in effect, the trophy for last place, and a most popular award, insult or accolade in the Six Nations.

While this most unwanted of honours has traditionally become an award routinely rotated between Italy and Scotland, France and Wales have each stepped in to claim a rotation, in 2003 and 2013 respectively.

Italy have claimed so many Wooden Spoons though - with 14 to their name in 20 campaigns - that there have been regular calls in recent years for the ever-improving Georgia to be promoted to take their place. 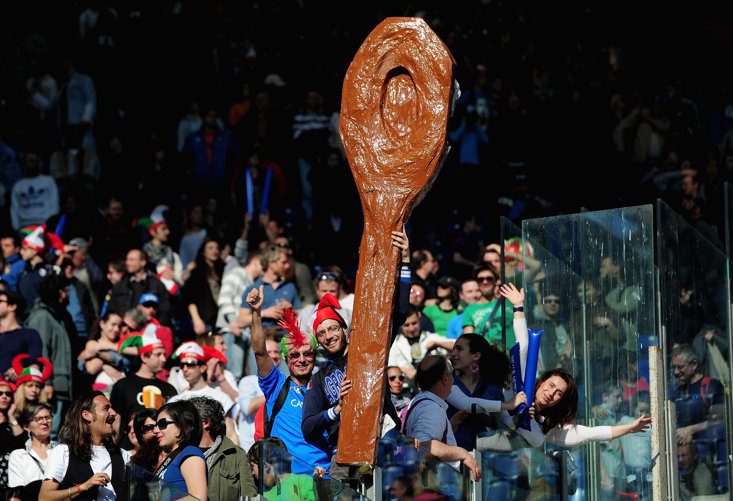 History tells us that the original Wooden Spoon arose from Cambridge University, handed out each year to the student who received the lowest marks in Mathematics but still earned a third-class degree – some, small consolation for the dropouts.

And while he lives, he wields the boasted prize
Whose value all can feel, the weak, the wise;
Displays in triumph his distinguish'd boon,
The solid honours of the Wooden Spoon

Record of the earliest Wooden Spoon can be traced back as far as 1803, but it was discontinued once the university began handing out grades in alphabetical value, thus making it impossible to adjudge that year’s sole winner. Unlike the Six Nations, Cambridge’s award was physical in its nature, with a new spoon nailed to the wall each year with the winner’s/loser’s name etched in for the annals. Over the years, the spoons grew in size and absurdity.

In 1894, the South Wales Daily Post published one of the earliest mentions of the spoon within a rugby context, noting that the ignominious trophy would be handed to the loser of Ireland vs Wales during the Home Nations Championship - the Six Nations' forerunner - that year.

The Wooden Spoon has since been adopted by Australian and New Zealand sports most prominently, no doubt in thanks to the strong link rugby union shares between the northern and southern hemispheres. 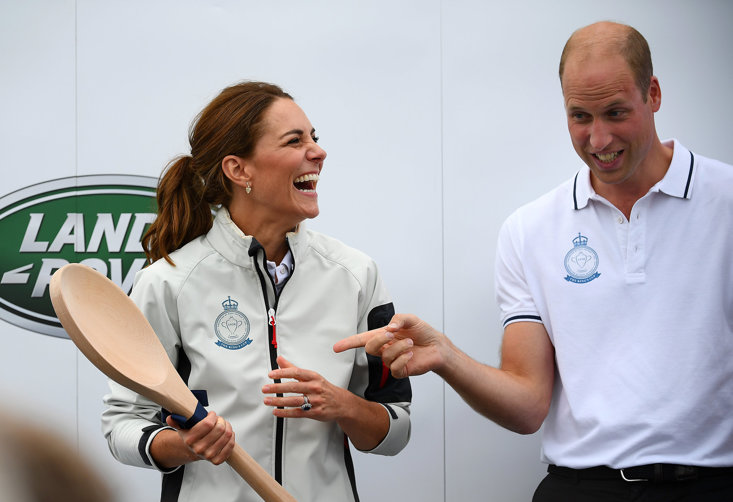 Australia seem particularly fond of the award, with imaginative, real and comically large wooden spoons waved at sporting events with some regularity. Australian Rules, soccer, cricket and rugby league have all had a variation on the trophy as a result of rugby union, while even tennis, sailing and rowing have come to love its comic value. The Duchess of Cambridge was notably handed a giant wooden spoon at the King's Cup sailing regatta in 2019, such synonymous has it become in a wider sporting context.

The Wooden Spoon has even migrated its way across the Atlantic, with Major League Soccer awarding the lowest-ranked team the award, with an official trophy commissioned in 2016.

From Cambridge to Italy and as far as Perth, the Wooden Spoon is not a coveted award, but it is a traditional part of the Six Nations and a growing force within the wider sporting world.

More
sports
Be Like Lewis Hamilton: The Athletes Who Overcame Obstacles...
“That was close,” Lewis Hamilton gasped, with possibly the world’s greatest understatement. [ ... ]
boxing
Ali’s Communist Twin: The Boxer Who Turned Down Millions To...
Former featherweight world champion Barry McGuigan once said that "Cuban boxers are genetically [ ... ]
boxing
From Pacquiao To Foreman: The Boxers Who Fought Father Time...
Father Time, more so than anyone they share a ring with, is the most challenging opponent any boxer [ ... ]
football
FC Gueugnon, PSG And One Of The Biggest Upsets In French Football...
A $1 billion operation. The most financially powerful club in world football. The possessor of the two [ ... ]
sports
Kevin Garnett, Uncut Gems And The Sports Star Cameos That Don't...
Sport stars making the successful transition from their respective fields to the big screen is nothing [ ... ]
football
Miners To Majesty: Understanding The Brilliance Of The Royal...
Committed, proud, loud and brave. The Royal Blue. They’re coming for you. And what a shade of [ ... ]
football
The Sportsman Interviews Weekend On His Latest Collaboration...
Ninety minutes is usually all that separates the football fan from experiencing the spectrum of emotion; [ ... ]
boxing
The Uncivil War: When Roy Jones Jr. Proved He Was The Best Fighter...
With unmatched hand speed, reflexes and movement that defied all logic and an athleticism that made [ ... ]
boxing
Executioners, Roman Centurions And A Harley: Boxing's Best Ring...
When the theme tune to Star Wars reverberated around Madison Square Garden in 1977 as Muhammad Ali made [ ... ]
sports
Meet The Man Behind The Mouthguard That Tells Your Brain How...
If you have watched a rugby match in the past year or so, you’ve almost certainly seen the work [ ... ]
football
Pulisic, Fernandes And The Premier League New Boys Who Tore...
The Premier League 19/20 is finally wrapped up, the final day of the season duly providing all the thrills [ ... ]
sports
Muhammad Ali, James Bond And A Jetpack: The Best Ever Olympic...
Across all sport, the one event that inspires unity and collectivism are the Olympic Games. The nations [ ... ]
boxing
New Bundini Documentary Shows The True Mastermind Behind The...
History hasn’t been particularly kind to Drew ‘Bundini’ Brown. A difficult man to [ ... ]
boxing
The Mike Tyson Interview: ''Living Takes A Lot Of Courage.''
Mike Tyson’s life has been a well-documented roller coaster ride. A difficult childhood, then [ ... ]
snooker
Booze, Women and Snooker: How Alex Higgins Became The Greatest...
Judd Trump aimed for the pocket of the top-left. A difficult angle but potting the red would allow him [ ... ]
sports
Five Pivotal Moments That Made London 2012 The Greatest Spectacle...
2012 was supposed to be the end of the world, remember? The ancient Mayans predicted a civilization-ending [ ... ]
boxing
Last Round, Folks: When Boxing’s Invisible Champion Was Blitzed...
History has not been kind to Floyd Patterson. Countless world champions have drifted through the annals [ ... ]
cycling
The Music Man And The Machine: When Wiggins And Froome Went...
Brits, find a better sporting highlight reel than that of 2012. We dare you.  Simply put, it was [ ... ]
golf
McIlroy’s Open Victory: When Neither Garcia, Fowler Nor Fowl...
“The Open is the one that we all want, the one that we all strive for and to be able to hold his [ ... ]
sports
Hero, Record-Holder And Tarzan: The Life Of Swimming Sensation...
Me, Sportsman. You, Reader. He hung around with chimpanzees, rode around on the back of wild animals, [ ... ]
football
James Brown In Japan: Around The City That Turned To Football...
There is a freshness to the air in the Earthquake Memorial Park in Kobe harbour in Osaka Bay. For those [ ... ]
sports
Make War, Not Love - From Barton To Boet, The Times The Sport...
The case was announced on July 9, 1975: The State of Minnesota vs. David S. Forbes. It became the first [ ... ]
rugby
From Wilkinson's Heroics To Nelson Mandela - Every Rugby World...
Dan Carter's brilliance, Jonny Wilkinson's boot, THAT image of Francois Pienaar and Nelson Mandela... [ ... ]
football
Japan’s Seismic Soccer Success That Helped Heal A Hurt Nation
Japan experienced the biggest heist in the nation’s history on May 12, 2011. The perpetrators [ ... ]
tennis
The Reign Of The Renshaws: When Tennis' Twin Rockets Smashed...
Starter for ten: which male tennis player has won the most consecutive men’s singles titles at [ ... ]
boxing
Pancho Villa: The Fighting Filipino Trailblazer Who Paved The...
As an eight-division world champion, the winner of 12 major world titles, the only man to hold world [ ... ]
motorsport
The Tragedy Of Alberto Ascari, The Only Italian F1 Driver To...
Alberto Ascari was just seven years old when his father Antonio died. Almost three decades later, when [ ... ]
boxing
Pandemonium In Atlanta: The Last Great 15 Round Title Fight
The 1980s was a transitional period for the world of boxing. The fledgling cruiserweight division, inaugurated [ ... ]
motorsport
Finally, The Grown Up Lewis Hamilton We Have All Been Waiting...
“I'm an extremist so I'm either hated or loved.” It’s safe to say the British [ ... ]
sports
Patrick Mahomes, A $503M NFL Deal And The Richest Contracts...
"Chiefs kingdom, you've been with me since the beginning - from rookie year. You helped us [ ... ]
This website uses cookies
Cookies help us and our partners provide statistics. By browsing this website, you consent to the use of cookies in accordance with our Privacy Policy and Cookies Policy.
Accept & Close