Football
Features
The former striker took charge at Old Trafford 12 months ago and has had a mixed first year
Kris Voakes
06:55, 19 Dec 2019

Once upon a time Ole Gunnar Solskjaer was the baby-faced assassin, with the schoolboy looks and the deadly finishing skills, in a Manchester United side sweeping all before them under the tutelage of the great Sir Alex Ferguson.

But, one year on from being handed the manager’s job at United, Solskjaer still has a lot of convincing to do as the Red Devils struggle to challenge at the top end.

To mark the occasion The Sportsman brings you Solskjaer’s End of Year Report...

Solskjaer has recorded some magnificent results during his 12 months in charge, with victories over the likes of Tottenham, Chelsea, Arsenal and Manchester City being achieved. Then, of course, there was that famous night in Paris as United overturned a 2-0 first-leg defeat to stun Paris Saint-Germain.

But those have not been backed up with positive results against more beatable opposition. Six games without a win at the end of 2018/19 condemned United to the Europa League this season, with an absolute tanning at the hands of Everton and defeats to the likes of Cardiff City, Crystal Palace and Bournemouth being typical of Solskjaer’s reign.

As a result, United are currently in sixth place in the Premier League, well adrift of the title picture. And that is exactly where they found themselves when Ole first walked into his new office at Carrington.

Ole is excelling in history. His knowledge of, and adherence to, Manchester United’s past is class-leading

Solskjaer has been nothing if not true to the traditions of the club, with an increased focus on youth development being prominent since the Norwegian took over. The promotion of Mason Greenwood to the first team has been a bright spot, while the gradual elevations of the likes of Tahith Chong, Angel Gomes, James Garner and latterly Brandon Williams have ensured that United’s links to their academy remain strong.

Of 13 players to be given their United debut in the last 12 months, only Harry Maguire was over the age of 21, and Solskjaer has taken every available opportunity to extol the virtues of giving younger players plenty of chances to impress.

Whatever Solskjaer does or doesn’t achieve at United the club’s future, in terms of the playing staff at least, appears bright. 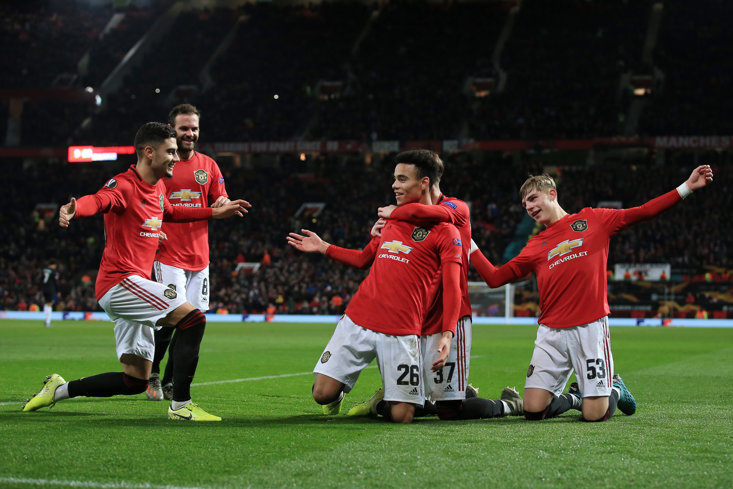 Solskjaer sets his United side up ready to hit teams on the counter-attack at every opportunity, but they only seem to be able to pull it off when playing against big sides who fancy themselves to dominate possession. That gives them the opportunity to exploit space in the opposition’s half.

Against the lesser lights who are more ready to bide their time and sit in a low block, Solskjaer has found it difficult to come up with a way of breaking down the stubborn defences United have faced. Their inconsistency also appears to be a natural by-product of their reliance on younger players.

The inability to dominate in midfield has been a real issue at times too, with the likes of Scott McTominay, Fred and Andreas Pereira asked to dictate the pace of play in an engine room previously manned by players of the ability of Michael Carrick, Paul Scholes and Roy Keane.

Ole has shown a certain aptitude in the business market, making a number of deals which have pleased assessors

Large portions of Manchester United’s fan base were crying out for changes in early 2018/19. Marouane Fellaini was considered too rudimentary an option under Jose Mourinho, while Romelu Lukaku struggled for goals and Alexis Sanchez was a flat-out failure.

Solskjaer addressed all of those issues and more, selling Fellaini and Lukaku before allowing Sanchez to try to find his form with Inter, while Chris Smalling was loaned out and Matteo Darmian released to cut some of the fat in defence.

In came Harry Maguire, Aaron Wan-Bissaka and Daniel James as the club’s new rhetoric about giving young British talent a chance was backed up. There is, however, a gaping hole in midfield that Solskjaer and the board failed to address over the summer, meaning United might have to go into the unpopular January transfer window in order to inject some hope into their push for a Champions League spot this season.

Ole has struggled with geography this year, failing to record a positive mark in 11 consecutive tests away from home

For a man whose first nine away games resulted in nine wins, the last of which came in toppling Paris Saint-Germain at the Parc des Princes, Solskjaer’s record on the road is actually pretty derisory on the whole.

That PSG game was soon followed by defeats at Arsenal and Wolves (twice), and heavy beatings by Barcelona and Everton, and when they stumbled into the new season with chastening away days against West Ham and Newcastle they had racked up a total of 11 successive trips without recording a single win.

Their away form has picked up somewhat, with Chelsea and Manchester City both beaten on their own patch in recent times but another reverse at Bournemouth helped to underline the fact that teams revel in hosting United these days. 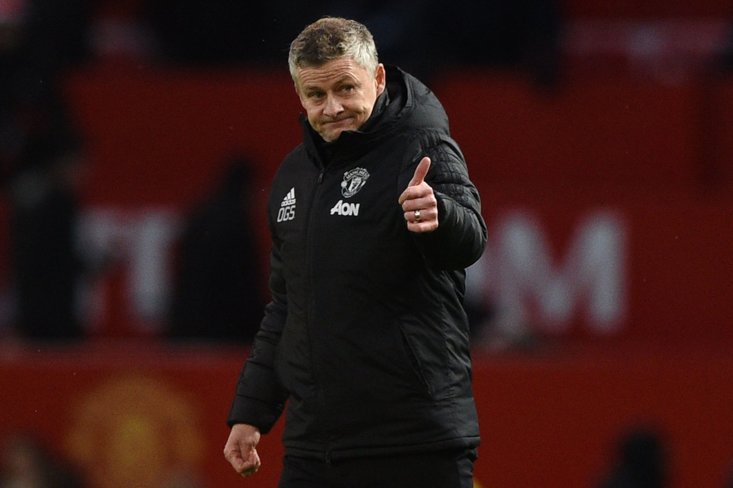 Advertisement
More
football
Fenerbahce's Light Out Of The Dark: When Turkish Women Ruled...
Hearing the cry of ‘Women and children first!’ could understandably take you to that freezing [ ... ]
boxing
Finding Mike - All The Details So Far On Jamie Foxx's Tyson...
Mike Tyson is one of the most explosive and enigmatic sportsmen of all-time. His life has been one of [ ... ]
football
A Wonder Of The Footballing World: Celebrating The San Siro
The position as a modern-day Antipater would be unenviable if one was tasked with nailing down the Seven [ ... ]
boxing
Ken Norton, The Former US Marine Who Used A Self-Help Book To...
Not a soul in attendance, even in his adopted hometown, believed Ken Norton had a chance of beating [ ... ]
football
11 Points And Down In March: Derby County's Nightmare Premier...
It is the 39th minute at Pride Park in front of a roaring 33,000 strong crowd, the majority of whom [ ... ]
motorsport
184MPH On A Push Bike... Meet The Fastest Cyclist In The World
The scorching Bonneville Salt Flats of Utah. As far as the eye can see, the view is only a two-tone [ ... ]
football
Thanks Gaffer - The 19th Century Moniker Modern Footballers...
If you watched ‘The English Game’ on Netflix recently, the countless differences between [ ... ]
football
We’ll Raise Your 27-0 And Give You 31-0, The Biggest Hammerings...
Winning provides happiness. Losing provides wisdom. In football, it takes two sides to create history, [ ... ]
football
Joaquin, We Salute You - Real Betis Royalty Who’s Reigned For...
Eight years. That’s the average length of a professional footballer’s career. Average. Joaquin [ ... ]
football
From The Work Of Art To The Throwback, The Season's Best New...
Leeds United were the first. That’s right, the Elland Road club who are back in the Premier League [ ... ]
tennis
From Stockport Rebel To Hollywood Favourite, How Fred Perry...
“I’m a great believer in trying to look the part. It’s a fetish with me.” For [ ... ]
football
Germany Vs Bayern? Brazil Vs Exeter? These Are The Best Club...
The club versus country row has increased this century, with the soaring popularity of the Premier League [ ... ]
football
Bill Shankly - The Teenage Miner, Midfield Star And Managerial...
Bill Shankly wasn’t only a great football manager, you know. He was one hell of a player too. [ ... ]
tennis
Why John McEnroe Epitomises The Best In Tennis And How It Can...
It’s nearing the end of the long, hot summer. The year is 1984. You’ve got your Member’s [ ... ]
football
Toffees, Trophies And T90s: Rooney’s Football Journey Through...
Wayne Rooney’s right foot was explosive, like a traction engine as Alan Partridge would put it, [ ... ]
tennis
Remembering Little Mo, The Grand Slam Winning 'Killer In Pigtails'
No other player has arguably had such a profound effect on tennis, in such a tragically short space [ ... ]
cricket
It Pays To Be Patient: The Sportsman’s Ode To 140 Years Of Test...
Can you imagine trying to sell Test cricket to the public in 2020, if it was a new invention? Given [ ... ]
boxing
First Glimpse Of Greatness: When Ali Fought Fear With A Parachute...
As he sat there on bended knees in the middle of the aisle, the beads of sweat rolling down his forehead [ ... ]
boxing
The Newport Rocky: The Best British Boxer You’ve Never Heard...
Before David Haye and Tony Bellew, there was David ‘Bomber’ Pearce. A British cruiserweight [ ... ]
us-sports
Vince Lombardi: NFL Legend, Pursuer Of Perfection, Champion...
His name adorns American football’s ultimate prize thanks to his outstanding record as a coach [ ... ]
tennis
Serena Williams Doesn't Need The Grand Slam Record - She's Already...
There is no benefit in asking when it will end, just be glad that it’s happened. And still happening. [ ... ]
football
The Most Successful 'Failure' Ever? Reflecting On Bale's Time...
You’re worth £90million. At home - or rather in your stunning, sunny Spanish villa, hundreds [ ... ]
boxing
Rocky Marciano - The Epitome Of The American Dream And An Age...
With the Great Depression and Second World War firmly in its rear-view mirror, the 1950s saw the United [ ... ]
boxing
Groves, Ali And A Life Inside Boxing: The Sportsman Interviews...
Irish boxing coach Paddy Fitzpatrick is the man you want in your corner. And not just in the ring. He’s [ ... ]
boxing
The Contender: The Reality TV Show With Stallone That Promised...
As the world entered the new Millennium, the sport of boxing and the world of reality TV were at polar [ ... ]
football
Bela Guttmann And The European Curse That Could Last A Century...
In the wide, wild world of football, whilst the tag ‘greatest of all time’ is continuously, [ ... ]
football
10 Superstar Facts About Messi Including The Other Lionel, Guevara...
Lionel Messi. So, he’s scored an incredible 704 goals in 869 games, netted 54 hat-tricks and lifted [ ... ]
golf
“I Guess, Hello World, Huh?” Remembering The Moment The Cub...
The north suburb of Brown Deer, Wisconsin, at the Brown Deer Park Golf Course.  A stage has been [ ... ]
us-sports
Four Years On, How Colin Kaepernick Continues To Transcend The...
On May 29th, this year, Vice President of the United States of America, Mike Pence, tweeted “We [ ... ]
tennis
Talent, Humility and Grace, £28M Naomi Osaka Is Worth Every...
“I know that everyone was cheering for her, and I’m sorry it had to end like this.” [ ... ]