With ‘Spygate’ hitting the headlines, it’s not just alleged members of New Zealand’s coaching staff who have been paying close attention to Eddie Jones this week. The eyes of the world have been on the England coach as he prepares for the Rugby World Cup semi-final by employing his latest brand of mind games in the build-up to Saturday’s match.

But his New Zealand counterpart, Steve Hansen, has remained unfazed by accusations of espionage, taking them in his stride as he prepares one of the greatest sporting teams of all time for yet another tilt at rugby’s greatest prize.

“Eddie and I both know that all is fair in love and war, and Eddie knows that in a time of war you throw out a bit of distraction for you guys to deal with,” Hansen told journalists ahead of the clash in Yokohama.

At this point, Hansen has seen and done pretty much everything the sport has to offer. In his 105 matches as the All Blacks’ coach, his side have incredibly lost just nine times, a record that seemed almost impossible when he took the job in 2011, and was even more improbable in August 2003.

Back in those days, Hansen was in charge of a Wales side which had lost 10 games on the bounce, including every game of a dismal Six Nations campaign, and his job was on the line heading into the World Cup in Australia. With just Scotland to face before the tournament kicked off, he faced a barrage of criticism for picking a whole host of fringe players but his response was defiant, blasting: "I'm confident I'm a good coach."

Wales beat Scotland and would make it to the quarter-finals of the World Cup before Hansen moved on to join the All Blacks as their assistant coach. He headed back to his homeland having left the Welsh in a good place, with former number 8 Jonathan Thomas singing his praises for the work he achieved behind the scenes:

“When Steve does interviews he can come across as quite stern and cold. But he actually cares an unbelievable amount about his players, and you can really feel that. He is a really loyal person. If you put the work in and do a job for him, he will reward that loyalty.”

As Graham Henry’s right-hand man he helped New Zealand end their 24-year wait to reclaim the Webb Ellis trophy in 2011. And when Henry’s contract expired following the 8-7 World Cup final win over France, Hansen was the obvious choice to take the reigns. 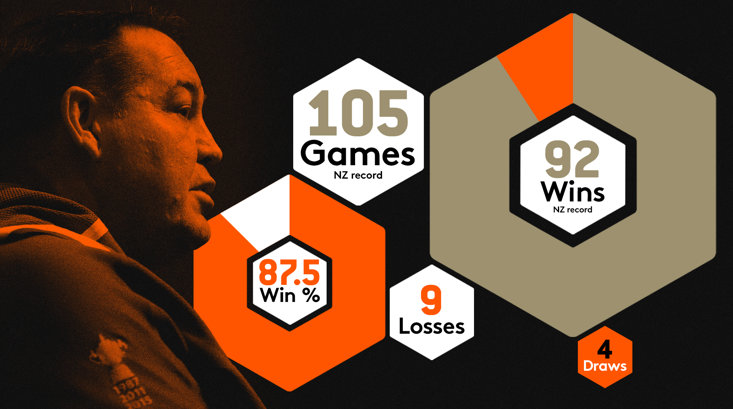 Even given their position as newly-crowned champions and considering the depth of quality available to Hansen, it was difficult to imagine the incredible success the Kiwis have gone on to enjoy under the 60-year-old. His 3-0 series win over Ireland in 2012 was a sign of things to come, with the All Blacks going through the whole of 2013 undefeated. The message written on a dressing room whiteboard by Hansen after their demolition of England that year simply read:

“We are the most dominant team in the history of the world.”

By the time the World Cup came around in 2015, there was little doubt which side would come out on top. Hansen led his side to a second successive title, overcoming South Africa and Australia at Twickenham in the semis and final respectively, playing some thrilling rugby on the way to glory.

During that World Cup win, legendary centre Ma’a Nonu made his 100th appearance for the All Blacks and Hansen’s comment on one of his star men resonated with every Kiwi:

I was never good enough to play for the All Blacks. I’d give up everything I’ve done in coaching to play one game. And most people would say I’d be lucky. He’s played a hundred.

Four years on, his stock continues to rise. His 87.5% win record is the greatest ever compiled by an All Blacks coach overseeing 15 of more games. At this rate he could continue in the role for 15 or more years.

This weekend will see two of the best minds in sport collide as Eddie Jones and England look to prevent New Zealand making it an unprecedented three World Cups in a row. Jones, a master of the mind games, has already been stoking up England’s billing as the underdogs ahead of kick-off.

"It's the two heavyweights of world rugby - one dressed in black, the crowd favourite, the nation's favourite, the other in white, probably the most disliked team in the world.”

That line in itself is a testament to the quality of Hansen’s men. Great teams or individuals in sport at the top of their game are often hated by the wider public, see Sir Alex Ferguson’s Manchester United, Lewis Hamilton or Australia’s great cricket sides of the past.

However, true greatness transcends sport when the whole world falls in love with the talents of an individual or team. Roger Federer, suave, sexy and bloody brilliant at tennis is universally adored. We may never see another phenomenon like Usain Bolt - everywhere he raced people were desperate to see him win.

Now Steve Hansen is taking his wonderful New Zealand team to that same level, exhibiting every bit of the relentlessness which has been the hallmark of sporting greats over a number of decades. Right now, his team look about as unstoppable as any sports outfit on the planet.

A win over the All Blacks would be remarkable for Jones’ England. But, whatever the result, one cannot help but marvel at the dominance of this great side, under the leadership of the best head coach in the world of sport.

More
boxing
Pancho Villa: The Fighting Filipino Trailblazer Who Paved The...
As an eight-division world champion, the winner of 12 major world titles, the only man to hold world [ ... ]
motorsport
The Tragedy Of Alberto Ascari, The Only Italian F1 Driver To...
Alberto Ascari was just seven years old when his father Antonio died. Almost three decades later, when [ ... ]
boxing
Pandemonium In Atlanta: The Last Great 15 Round Title Fight
The 1980s was a transitional period for the world of boxing. The fledgling cruiserweight division, inaugurated [ ... ]
motorsport
Finally, The Grown Up Lewis Hamilton We Have All Been Waiting...
“I'm an extremist so I'm either hated or loved.” It’s safe to say the British [ ... ]
sports
Patrick Mahomes, A $503M NFL Deal And The Richest Contracts...
"Chiefs kingdom, you've been with me since the beginning - from rookie year. You helped us [ ... ]
football
Five Bona Fide English Stars Who Plied Their Trade Down The...
Wayne Rooney: record-goalscorer for club and country. At Manchester United, the Croxteth prodigy performed, [ ... ]
boxing
Hypnotists, USB Sticks And A Megaphone: When Boxers Bring Out...
The winners and losers in boxing aren’t always decided in the ring by whomever has the most superior [ ... ]
football
President Vs Player: One Year On From Rebel Rapinoe Being On...
"I'm not going to the f*cking White House. No, I'm not going to the White House. We're [ ... ]
tennis
The Day A Flawless Fred Perry Stormed Wimbledon To Win A £25...
“Packed Centre Court sees strenuous struggles for Championships!’ screamed the Pathé [ ... ]
boxing
Five Unmissable Big Screen Boxing Masterpieces That Aren’t Rocky...
Like almost no other sport, boxing is tailor-made for the silver screen. There’s something in [ ... ]
us-sports
The Luckiest Man On Earth: When Lou Gehrig Bid A Fond Farewell...
In the Friends episode, The One Where Old Yeller Dies, the character Phoebe Buffay (Lisa Kudrow)  [ ... ]
motorsport
Why NASCAR Maverick Wendell Scott's Battle With Bigotry Is As...
It is less than two weeks after the assassination of John F Kennedy. On the dirt oval at the Jacksonville [ ... ]
sports
From Daring Sea Rescues To Shunning Hitler: The Greatest Acts...
Nothing warms the cockles and brings a lump to the throat as seeing, hearing or regaling acts of sportsmanship [ ... ]
football
Sun, Sand And Bicycle Kicks: The World Of Beach Football Deserves...
The dying minutes of the game, down one goal. Former Liverpool midfielder Jamie Redknapp composes himself, [ ... ]
boxing
From Hammering Holmes To Blitzing Berbick: Mike Tyson’s Five...
With a boxing comeback in the pipeline, a hugely popular podcast and a 400-acre cannabis ranch opening [ ... ]
boxing
Cassius Clay vs The United States: The Greatest Fight Of Muhammad...
On June 20 1967, it took an all-white jury just 21 minutes to find Muhammad Ali guilty of draft evasion. [ ... ]
boxing
Assault In The Ring: The Dirtiest Boxing Match In History
On June 28, 1997, Mike Tyson and Evander Holyfield shared arguably the most infamous night in boxing’s [ ... ]
sports
The Sportsman Interviews Anthony Curcio, Football Player And...
Anthony Curcio is the world’s nicest bank robber. Friendly, talkative and generous with his time, [ ... ]
football
From Van Basten's Volley To Müller Magic: When The Olympiastadion...
It has been 15 long years since a football was kicked at the Munich Olympiastadion in official club [ ... ]
tennis
History Makers, Record Breakers And Pimms: Why Wimbledon Is...
Weep in the realisation that this should have been the week of Wimbledon, arguably the most anticipated [ ... ]
boxing
From Knocking Out A Horse To Missing Gold Medals: Five Of Boxing's...
Boxing has had its fair share of pieces of folklore since the introduction of the Queensberry Rules, [ ... ]
boxing
Joe Louis, The Third Reich And The Most Politically Charged...
On June 22, 1938, with the world on the brink of war, two boxers from opposite sides of the Atlantic [ ... ]
motorsport
Fighter Pilot, Racer, Transgender Pioneer: The Brave Life Of...
Robert Cowell was naturally left-handed but forced to use the right at a young age. The child of a decorated [ ... ]
boxing
Blood, Guts And Determination: Remembering Lewis And Klitschko's...
After 44 fights, 41 victories, 32 knockouts and three heavyweight championships, on June 21, 2003, Lennox [ ... ]
boxing
The Brawl In Montreal: Sugar Ray Leonard’s Rude Awakening At...
Four decades ago, when the ink had dried on Sugar Ray Leonard’s contract to face a Panamanian [ ... ]
football
The Danish Club Giving Locked Down Fans The Ultimate Virtual...
English football fans got their first taste of the ‘new normal’ this week as the Premier [ ... ]
mma
Prevention Better Than Cure - Confronting Head Trauma In MMA,...
Oh, the ignominy. ‘Baby’ Jay Dee ‘The Prodigy’ Penn, an inspirational martial [ ... ]
sports
From Keano Vs Big Mick To Chicken Wing-Gate: When Players And...
The wonders of the modern world: the Taj Mahal; Kiyomizu Temple; Fenway Park. The home of the Boston [ ... ]
football
Henry, Rodgers And Klopp: Remembering Liverpool’s Love Affair...
“We're here to win,” declared Mr. John W. Henry, in November 2010.  The Liverpool [ ... ]
golf
Flying Kicks, Epic Insults And Hilarious Advice: The Very Best...
“He is who he is. You can ask him about anything and he’s never going to short-change anybody. [ ... ]
This website uses cookies
Cookies help us and our partners provide statistics. By browsing this website, you consent to the use of cookies in accordance with our Privacy Policy and Cookies Policy.
Accept & Close