“I just fired off a shot and my flash went. They started to raise their fists. Ultras don’t like having their photograph taken.”

Matt Walker, author of the Europe United, relives his brush with angry football fans as Kerkyra of Corfu clashed with Greek giants Olympiacos.

However, in the glare of the irked group, personal safety and the prospect of confrontation amazingly wasn’t his main concern.

“I wasn’t worried for me, I was more concerned for my camera!” 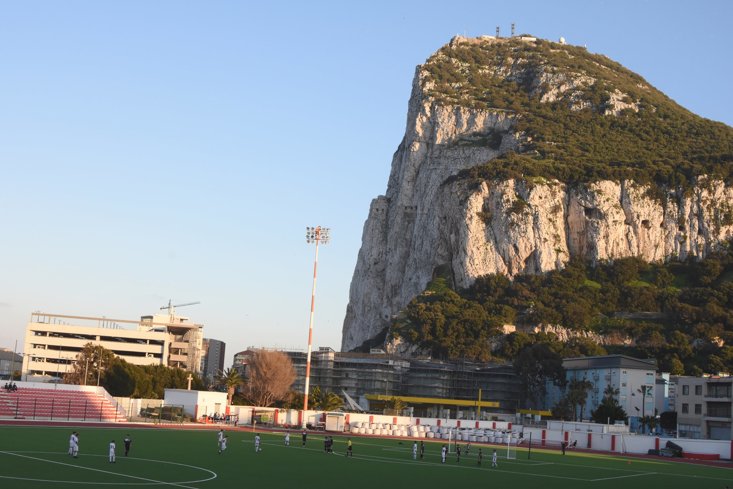 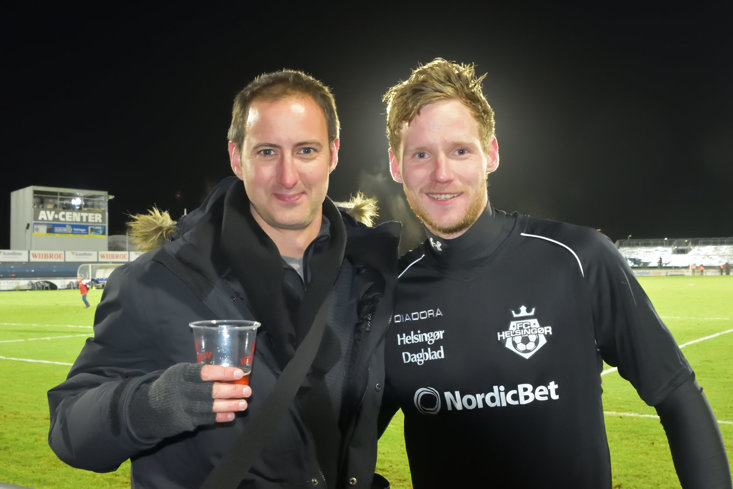 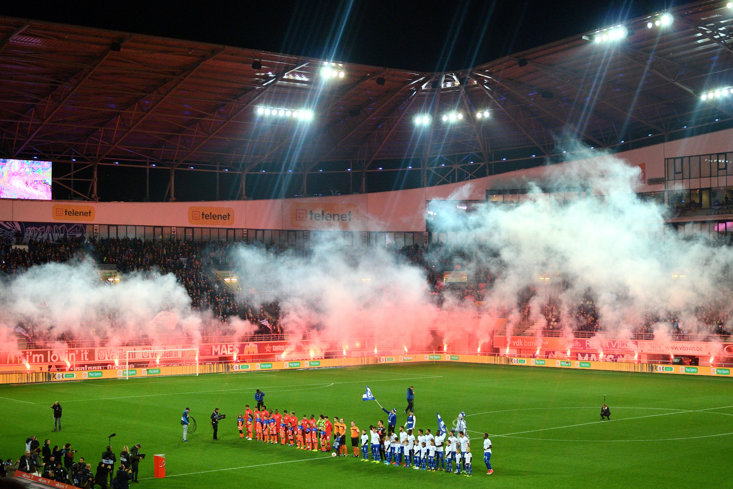 From Germany to Gibraltar, Spain to San Marino, and Italy to Azerbaijan, Walker took on the challenge of watching a football match in every one of UEFA's member countries. That's 55 in total, spanning an area of more than 40,000 miles.

For Matt, his European journey was all about sun, sea and stadia, an ode to the beautiful game. He had the idea one quiet day in December 2015 and, as a huge football fan, the thought never left his head - he was a man on a mission and embarked on his dream journey 18 months later.

Some days he could be found standing at the side of little more than a field, on others, in a packed-out arena. He succeeded in his quest, covering 79 games in total - and it’s all detailed in his brilliant book.

When one thinks of European football, hardcore supporters, giant masses of flares and hugely intimidating, deafening atmospheres all spring to mind. Visiting these games alone would fill most people with trepidation.

But that’s not the case for Walker, in fact that nervy incident on the Ionian island was by far his scariest moment. What often happened was goal-crazy strangers would jump all over him in celebration as he attempted to document what was going on in his notepad.

During his eleven months of travel, Walker actually gained plenty of friends, witnessed some incredible games and immersed himself in European football.

Though his camera was a persistent cause of anguish.

While security and the possibility of suspicious looks varied from club to club, it was in Turkey where his faith in the Football Family was cemented.

Forbidden from taking snaps at Trabzonspor, he put his trust in a complete stranger.

“I ended up leaving my camera with some very dodgy looking people, one guy had a car nearby,” he remembers, full of worry but with little choice.

“I trusted my £1000-plus camera with someone I had just met in the stand. He could have easily put it behind a bush and then took it.

“All game, my number one concern was my camera. Though good enough, at full-time, he went to his car, got the camera and put it into my hands. That was fantastic and I think it emphasises the trust in a crowd of local supporters.” 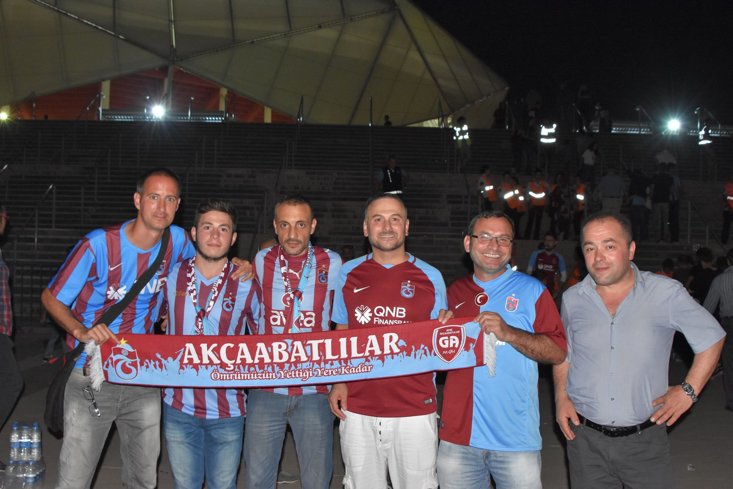 Visiting some of Europe’s most-famous, storied clubs, the majority of his days out were spent in European football’s perceived backwaters. Such a football pilgrimage takes months of meticulous, stressful planning.

“I’m an analytical person and I knew the first thing to do was look at the previous season’s fixtures, the most reflective of the season coming up. I looked first of all to see if it was feasible because nobody had ever done it before,” he explains.

“There were twelve summer seasons, so I needed to visit those countries first so that I didn’t run out and I also had to have a contingency - I didn’t want to go to Kazakhstan on the last day and find my flight had been cancelled.

“Then I plotted a route for the clusters of countries where seasons were live and also reflected my interests - so, I wanted to spend more time around the Caucasus and Mediterranean than I did around central Europe.

“I plotted in advance but couldn’t confirm until the fixtures came out. I had a very busy August 2017 when about 40 leagues published their fixtures - you can imagine the hammering of spreadsheets I had to do.” 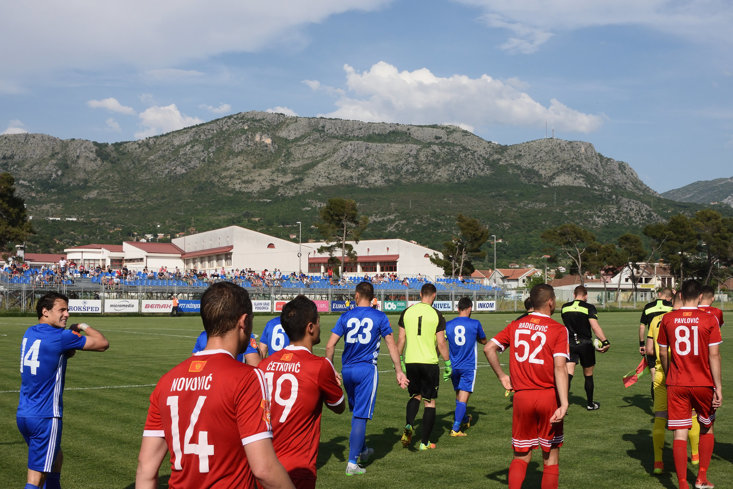 As his trip gained traction across social media and the world’s sports pages, Walker became something of a mini-celebrity in some places.

“The media coverage I got was far more than I expected,” he says, having even done a live broadcast on the BBC’s Football Focus during his sojourn to Bournemouth vs Everton.

“I thought maybe a few local papers would be interested but going live on Italian TV, that was quite glamorous - they paid for my flights and put me in a hotel in Milan.

“I certainly got the superstar treatment at Maribor in Slovenia where they gave me half the club shop!

“Quite a lot of the time though it was me rocking up with nobody knowing I’d be there. Most of my encounters were purely chance on trains, in bars or at the game itself.” 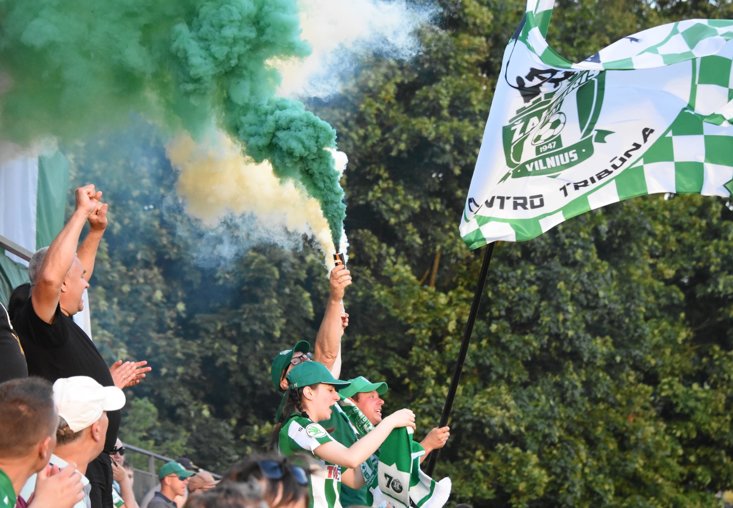 Premier League, Bundesliga, La Liga, Serie A - every Gameweek is packed with drama. Now imagine the show on offer across 79 football fixtures the length and breadth of Europe.

“Trabzonspor losing 4-3 having been three goals up,” is Walker’s instant reply when asked of the craziest game he attended. “I’ve been to a lot of matches and I don’t think I’ve ever seen a home team blow a 3-0 lead.”

Such is his love and knowledge of football, we now go off on a tangent for five minutes, as we recall it has, in fact, happened before - Tottenham lost the same advantage as Sir Alex Ferguson’s Manchester United came from behind to win 5-3 at White Hart Lane in 2001.

Back on topic and the ‘Black Sea Storm’ again get the nod when the conversation turns to the most mind-blowing supporters. Such a huge following for one club, they’re intoxicated on football, according to Walker.

“Trabzonspor fans and Turkish supporters, in general, have got a bit of a reputation for being pretty crazy while not being drunk.

“Nobody really drinks in Turkey, alcohol is expensive and it’s not the culture out there to drink heavily so everyone is sober but so crazy for their football.

“Trabzonspor are like a Newcastle or a Leeds, a one-club city, and everyone there supports the local team rather than one of the Istanbul big three.

“Even though they lost I really got a feel of how much it meant to them and the whole town.” 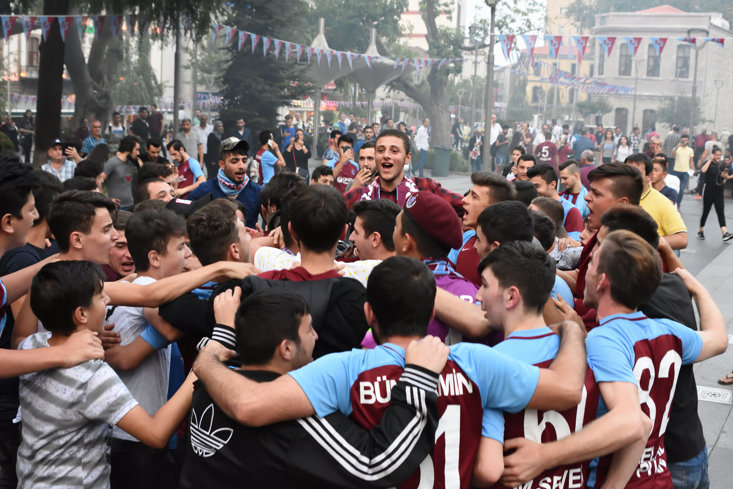 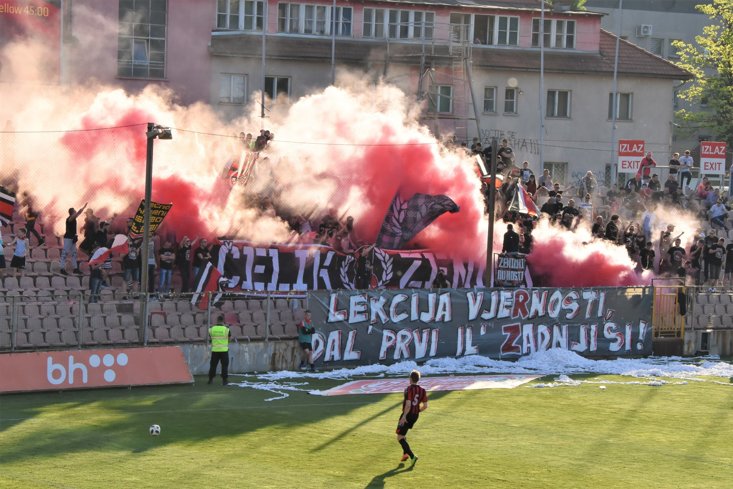 Aside from the action on the pitch, spectacular shows from the stands are also a regular occurrence on the continent. Motifs and flags are proudly displayed every week and Walker got involved in Denmark.

“There was a special display in Brondby,” says Walker. “That was really cool, though I didn’t really appreciate it until I saw the pictures because I was part of it!

“I was in the south stand with all of the other hardcore fans. Yellow and blue confetti, massive banners - the sort of display you don’t really see in English football.”

Walker became a scout without even realising it during his trip and a number of future Premier League stars caught his eye. Diogo Dalot, now of Manchester United, Everton midfielder Jean-Philippe Gbamin and Southampton defender Jannik Vestergaard all grabbed his attention before their moves to England.

Seeing the next undiscovered gem was always a possibility but he was enthralled by all levels and abilities; every game possessing its own unique charm.

“Part of the joy of the trip was seeing the entire spectrum, from part-timers in the likes of San Marino through to A-List players playing in the big leagues,” he says. “Some fixtures were more like non-League.

“A top-tier game in Wales, for example, is like the fifth or sixth division in England.

“I think one of the best things was the contrast between leagues. I was watching Montpellier one night and then watching a game in Andorra the next afternoon. I was in Gibraltar with a couple hundred and then watching Sevilla play Atletico in front of thousands.” 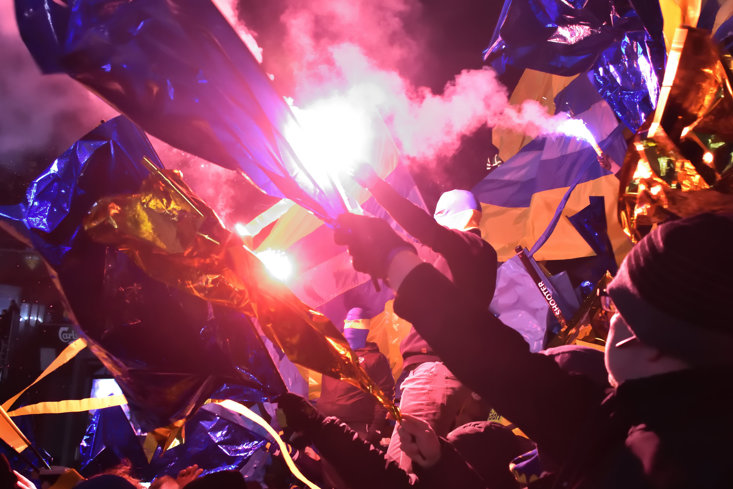 It was the more quaint sides that gave him the most interesting anecdotes.

“The best stories and most novel experiences were with the smaller clubs. The fans of clubs like Porto and Sevilla aren’t going to be as open with you but you turn up in Gibraltar, I had queues of people wanting to speak to me and felt far more genuine than Spain and Portugal".

Asked for his favourite ground, he replied: "The Pancho Arena has won various design awards."

Despite a capacity of only 3,800, it’s a masterpiece. Modern but archaic, sweeping, timber beams stand high above the seats and resemble the gothic architecture one would find in a 12th Century cathedral.

“It’s in Felcsút, a small town West of Budapest where the current Prime Minister Viktor Orbán comes from - it may not be a coincidence that there is a fantastic new football stadium in his old hometown,” jokes Walker.

“It’s incredible, a real design classic; it’s not very big though it’s not about the size, it’s about the design. A stadium not like any other, not like those identikits - I think that’s why I like it”. 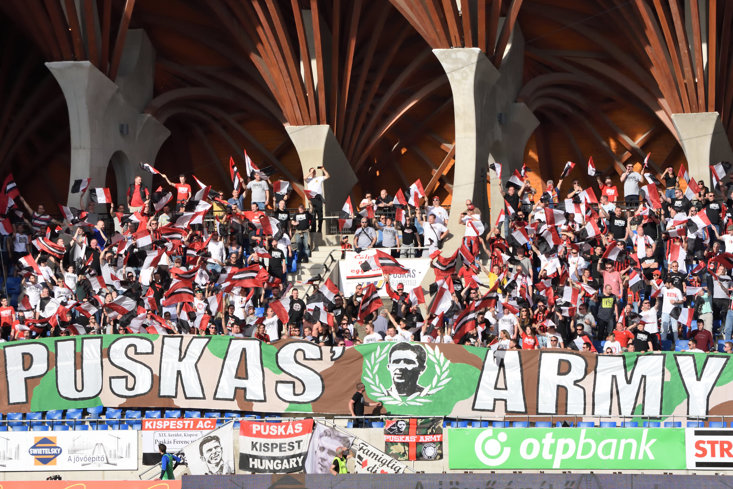 Astonishingly, Walker’s match ticket outlay only totalled around £400 for all 79 games. While he did get some help with clubs and journalists offering freebies, he noticed some real bargains, including the chance to view two games in one matchday. One entrance fee cost a fifth of a pint at most Premier League grounds.

“The cheapest ticket I saw was 70p in Taraz, Kazakhstan” he reveals. “And it was 12p for children, which even in Kazakhstan is not a lot of money.”

“I saw five games in Malta because they do doubleheaders in the same stadium,” he adds.

“Most of the clubs don’t have their own stadiums, they use more communal stadiums or those owned by other clubs. I was able to see two games for eight euros.” 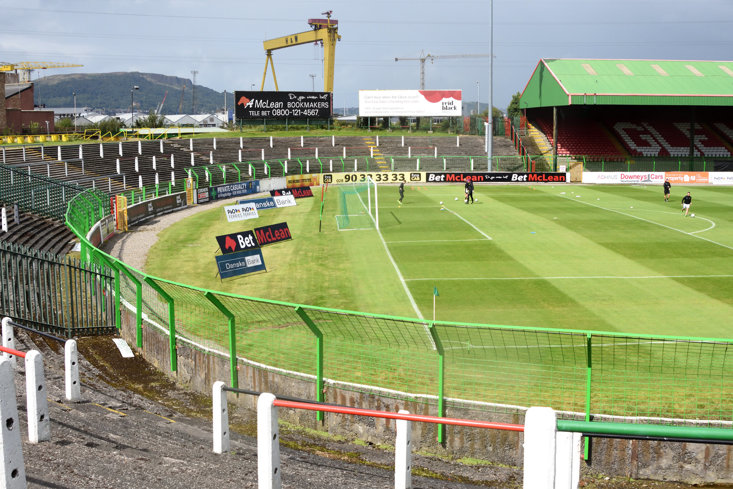 He remembers one journey, in particular, was more excruciating than the rest.

“My single most difficult trip, logistically, was getting from San Marino to Luxembourg in one day. I don’t think anyone has done this before. The easiest way is to drive but that’s no good if you don’t have your car with you and you can’t hire one in San Marino and drop it off in Luxembourg.

Just listening to Walker detail this leg of the trip was exhausting. 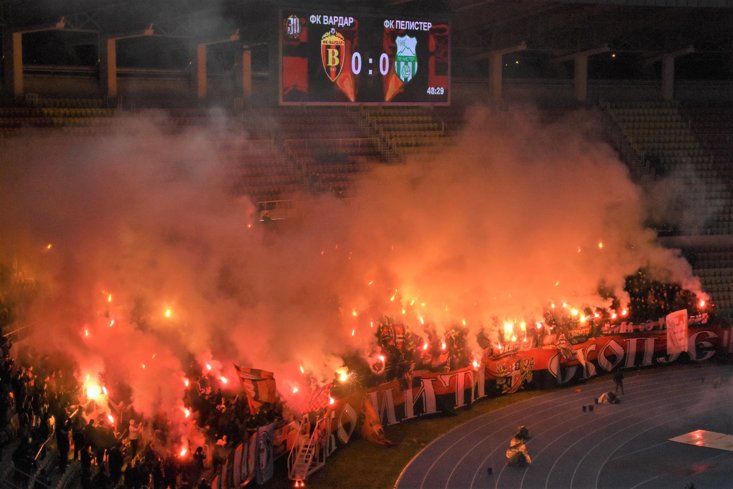 So, what advice does he have for fellow football explorers?

“Don’t get fixed on one game,” is Matt’s suggestion. “Many people are desperate to see a Barcelona or a Real Madrid but if the game gets moved you could miss it, so give yourself time and a bit more flexibility.

“Sometimes it’s hard to hold off booking flights but I went to Belgrade for the derby and they moved the game at the last minute from a Wednesday to a Saturday. I met so many sad football fans who weren’t going to make the derby as they had already booked their return flight.”

“Spend a week in one country and go to the games that happen to fall in that time, particularly in the smaller leagues, where it won’t be so difficult getting tickets and you’ll get a better feel for the country.

“It was the whole thing, I didn’t just enjoy the holiday itself, I enjoyed the planning and the aftermath, talking about it. I lived through all of the extremes, from having fantastic days to having some of the dullest days on transport that you’ve ever had in your life.”

Now, who are Partizan Belgrade playing next and where are those cheap flights?