Football
Features
River Plater or bitter rivals Boca Juniors could both win the league on the last day of the season
Joshua Law
06:55, 06 Mar 2020

Last Saturday afternoon, Hernan Crespo walked out onto the pitch at River Plate’s Estadio Monumental to a rousing reception. He is a bona fide legend at the club, having won two league titles and a Copa Libertadores with them in the mid-1990s. An hour later, River fans would have been cursing his presence. Crespo is now manager of Defensa y Justicia and his team were 1-0 up. It looked like a River hero might be about to deal a blow to the club’s chances in their thrilling title race with bitter rivals Boca Juniors.

Boca had won the night before, beating Colon with four second-half goals, including one from Carlos Tevez, to move onto the same 45 points as River. With River behind, the Superclasico antagonists were going into the final round of games level in the Superliga. In the Argentinian top division goal difference is irrelevant – if two teams finish level on points after the 23 rounds, the title is decided by a head-to-head playoff at a neutral ground. The possibility was drawing a step closer.

Then, with 25 minutes to go, River attacker Nicolas De La Cruz wriggled free in the penalty area, was brought down and the referee pointed to the spot. Juanfe Quintero’s penalty hit the net, earning a point for the Millonarios. So, River’s fate remains in their hands. If Marcelo Gallardo’s men win on Saturday, away to Atletico Tucuman, River will be champions of Argentina for the first time since 2014.

Yet the potential for a nail-biting finish is very much still on. If River draw, then a Boca win will send the trophy to the Bombonera. If River lose, a Boca draw will make the tantalising possibility of that Superclasico playoff a reality. To add an extra layer to the drama, the man trying to stop Boca from catching River is Diego Maradona. It sounds like a storyline penned by an overly exuberant soap opera writer. Football in Argentina often does.

Maradona is currently back coaching in Argentinian domestic football for the first time since 1995, at Gimnasia de la Plata. When he took over, Gimnasia looked doomed, but improved results and a mid-season change to relegation rules has given them hope. Relegation will only be decided after the Copa de la Superliga, a tournament designed to fill space owing to the shortened league season. But if Gimnasia beat Boca, they will stand a much better chance of survival.

As if that was not enough to fire up the Gimansia players and manager, Maradona is currently involved in a bitter feud with Boca president Jorge Ameal and his right-hand-man Juan Roman Riquelme. Maradona has made no effort to hide his hatred for Riquelme since the ex-Villarreal midfielder quit the national team when El Diego was coaching them in 2009. At the time, Riquelme said that “my values are not [the same as] his”. 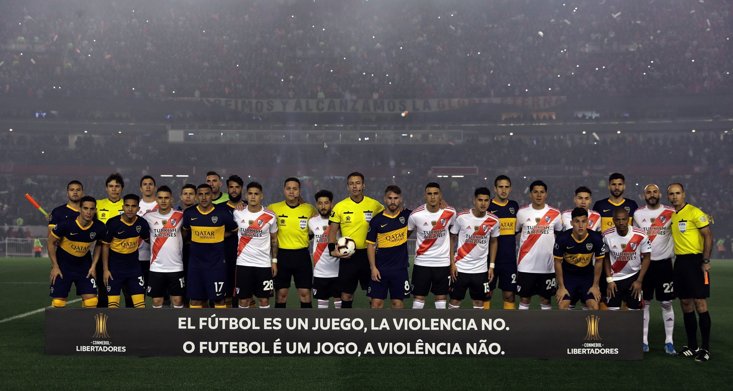 When the Boca Juniors presidential elections rolled round last year, it was of little surprise that the two No.10s were supporting opposing candidates. A war of words ensued, with Maradona saying that for Riquelme the “dollars” were more important than “convictions”. But Riquelme’s man won and Maradona finds himself with diminished influence at the club he supports. Usually, he would beat Boca reluctantly, on Sunday he would savour it.

If Maradona can put the breaks on Boca’s last-gasp push for a second title in three seasons and River get over the line in Tucuman, then it would break a relatively long dry spell for the Millonarios. River last won the national title in 2014, just before their current manager Marcelo Gallardo took charge.

Conversely, the intervening years have been some of the most successful in the club’s history. Gallardo, a team-mate of Crespo in that all-conquering side from the 1990s, has, as manager, led River to two Copa Libertadores, three Copa Argentinas and a Copa Sudamericana. Yet in the league, they have consistently underperformed. When River took top spot from Boca in late January, it was the first time they had led the Primera Division in over 800 days.

For Gallardo, then, this title is doubly important. He has been linked to a host of European giants, most notably Barcelona, owing to his success. But the lack of league trophies in Argentina has always been a question mark against his name. This title could cement his legacy at River before a potential move in the summer and provide a little bit of solace after their traumatic last-minute loss to Flamengo in the Copa Libertadores final in 2019.

So desperate Gallardo to win the league, in fact, that he did not send any first-team players to their mid-week Libertadores group stage fixture away in Ecuador against LDU. Gallardo did not travel either, staying in Buenos Aires to treat the angina from which he has been suffering. River lost 3-0, but Matias Biscay, the assistant who took charge of the team in Quito, was dismissive of the result, telling Olé that, “In 2015 we lost the first game at altitude and in the end were [Libertadores] champions.”

Boca manager Miguel Angel Russo, who only took charge in January, travelled even further with his team for their opening Libertadores fixture on Tuesday, away to Caracas in Venezuela. Whilst Tevez and Eduardo Salvio were spared the arduous journey, a smattering of first teamers started the 1-1 draw and several more were on the bench. It will be interesting to see the physical effects of the respective managers’ differing approaches come the weekend.

Players-turned-pundits on both sides of the Superclasico divide have been talking up their side over the airwaves in Buenos Aires this week. Ex-River forward Fernando Cavenaghi declared to TNT that, “This River team will never lack confidence.”  Cristian Traverso, a three-time title winner with the Xeneize, told Crack Deportivo that, “On Saturday, Boca are going to win and will be champions, I have faith.”

On Saturday at 9 p.m. Buenos Aires time, the whole of Argentina will tune in to see who is right. 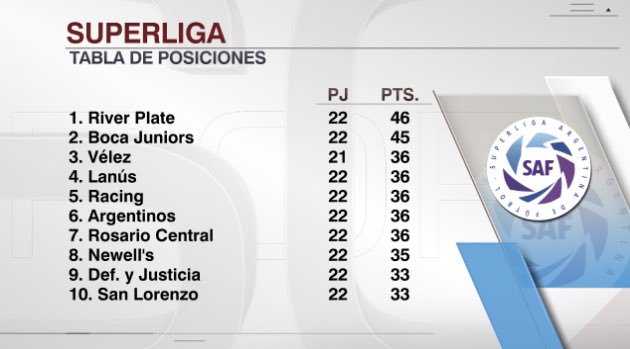 2
12
x
Suggested Searches:
Manchester United
Liverpool
Manchester City
Marcus Rashford
Premier League
More
football
How Cantona Made Manchester United The Dominant Force Of The...
It started with Leeds United making an enquiry about signing Denis Irwin and finished with Manchester [ ... ]
football
Almost 30 Years Since THAT Goal, Davide Gualtieri Is Still San...
8.3 seconds, 28 years ago. That’s all it took for part-time footballer, part-time computer [ ... ]
boxing
River Wilson Bent Talks Coventry City, Newborn Baby And British...
“Imagine if Coventry City made it to the Premier League and I brought the British title home for [ ... ]
boxing
Remembering The Fight That Sparked Sport's Greatest Rivalry:...
“I hated Ali. God might not like me talking that way, but it's in my heart.” Amidst [ ... ]
football
Neil Warnock - The Record Breaking Football Lover That Just...
When the whistle blows at Kenilworth Road for Luton Town's home match against Middlesbrough on Tuesday [ ... ]
football
Leicester's City Progress Is Proof That Vichai's Vision Has...
On this day three years ago Leicester City lost their influential owner, Vichai Srivaddhanaprabha in [ ... ]
rugby-league
The Birth Of The Grand Final: Rugby League's Biggest Of Big...
“I’ve said it for years… the last game of the season should be the most important,” [ ... ]
football
Celebrating Arsenal's Invincibles With The Stats That Tell The...
There’s Sergio Agüero winning it in Fergie time. Liverpool finally ending 30 years of hurt [ ... ]
football
From Balotelli To Bullard, The Premier League's Greatest Ever...
It's been a full decade since Mario Balotelli lifted his shirt in Manchester City's 6-1 [ ... ]
motorsport
On This Day: Rookie Lewis Hamilton Loses F1 Title In Controversial...
On this day in 2007, we witnessed perhaps the greatest end to a Formula One season we have ever seen. [ ... ]
motorsport
How Lauda's 140mph Crash Marked The End Of The Age Of Innocence...
There are few worse moments to lose control than when driving at 140 miles per hour. The events on just [ ... ]
football
FA Cup Round-Up: Brilliant Buxton Make First Round As Dorking...
It was a night when Dorking Wanderers saw their dreams dashed by Hayes and Yeading, Stratford made some [ ... ]
us-sports
Celebrating Jim Brown - The NFL Movie Giant Who OJ Robbed Of...
Before OJ there was the OG. The Original Gangster. In fact he was front and centre of an action-packed [ ... ]
football
Sheriff Tiraspol - The Champions League Club With Two Faces
On the surface, it has been the underdog story of the Champions League so far. Never before has a club [ ... ]
boxing
From Taming Tyson To Bashing Buster, Evander Holyfield’s Best...
Today marks the 59th birthday of one of the best boxers to lace up a pair of gloves in the modern [ ... ]
football
Fernando Torres - Atletico's Local Hero, Liverpool's Tainted...
‘This means more’ is Liverpool’s oft-derided motto, but when they face Atletico Madrid [ ... ]
football
On This Day In 1987: The Rangers v Celtic Shame Game
Whatever the circumstances when Rangers face their Glasgow neighbours Celtic the [ ... ]
athletics
On This Day In 1968: The Greatest Sporting Protest Of All Time
Some sporting images will stay with us forever. Muhammad Ali standing over Sonny Liston, Michael Jordan’s [ ... ]
football
Dorking Wanderers Aiming To Complete The FA Cup's Ultimate Underdog...
Something is stirring in the sleepy, stockbroker-belt Surrey market town of Dorking. And if the Wanderers [ ... ]
boxing
Outside the Ropes: Jennings Gym - Training, Tunes And Gardening...
Jennings Gym is not your average boxing gym. Tucked away on the ground floor of a former cotton spinning [ ... ]
football
Thierry Henry - ''The Best Player To Have Ever Played In The...
"No, number one is not Alan Shearer - number one is Thierry Henry. Thierry Henry is the best player [ ... ]
football
93.20: The Moment Sergio Aguero Changed English Football
The greatest moment in Premier League history. Sergio Aguero’s goal against Queens Park Rangers [ ... ]
cricket
Assessing England's Ashes Squad: The Strengths And Weaknesses...
So we know the 17-man squad that will go Down Under to try to win the Ashes for England this winter, [ ... ]
rugby-league
Naiqama Seals His Perfect Ending After A Year Of Personal Turmoil
Less than a year ago, Kevin Naiqama looked destined for anything but a fairytale ending to his St Helens [ ... ]
football
Alan Shearer: Newcastle's Boyhood Hero Who Won The Hearts Of...
Footballers in this day and age are judged by how many trophies they win. But when Alan Shearer, the [ ... ]
rugby-league
French RL Ready For Momentous 2022 After Toulouse Promotion...
French rugby league had never known as important a weekend as this one. Catalans Dragons were in their [ ... ]
football
Paul Scholes - The Unassuming Magician Who Ruled The Premier...
England don’t produce these types of players often, but every now and then a footballer will come [ ... ]
football
Frank Lampard - The Intelligent Goalscoring Genius Who Helped...
During the 90s and early 00s, the influx of money into the Premier League had led to a whole new era [ ... ]
football
Roy Keane: The Midfield Enforcer Who Was So Much More
Roy Keane is held up as the defining defensive midfielder of the first half of the Premier League era. [ ... ]
boxing
Bare-Knuckles, Blades And Broughton: The Evolution Of The Boxing...
From oxhide to metal, hemp rope to horse hair, it’s fair to say those shiny, top-of-the-line gloves [ ... ]