If you watched ‘The English Game’ on Netflix recently, the countless differences between Victorian era football and the sport we see today will not have been lost on you. We have never witnessed Lionel Messi wearing long johns on the pitch, the ball is no longer a heavy misshapen lump of brown leather, and Cristiano Ronaldo doesn’t spend most of his week donning a morning suit. At least, not that we know of.

But one thing does remain the same as back in those days when the Old Etonians were the dominant force and the only controversial foreigners in the game were those who arrived from Partick. Because, just as in the 19th century, football managers today are still regularly referred to as ‘Gaffer’ by players and staff members alike

The moniker is most associated with traditional British types, with the likes of Sean Dyche and Neil Warnock considered the personification of the stereotypical ‘Gaffer’, all gruff, shouty and Northern. Warnock even named his autobiography ‘The Gaffer’ in reference to the nickname he has lived by for the last four decades. 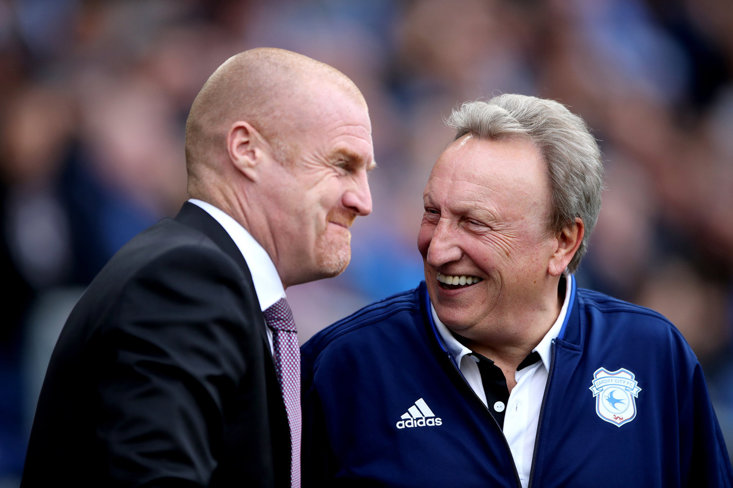 The link between those archetypes and the word itself is perhaps understandable since ‘Gaffer’ it was the name given to foremen back in the days when ‘The English Game’ stars Fergie Suter and Jimmy Love were coaxed down from Glasgow to lead Darwen’s assault on the upper-class football hierarchy of the time.

The word originally came to prominence as far back as William Shakespeare’s days in the 16th Century, when the sobriquet was derived from the word ‘Godfather’ as a term for an older man. In time it became a well-used name for the boss of a team of labourers, making it a staple of the factory floor.

The ascension of working-class football teams in Victorian times saw the name ‘Gaffer’ being used for managers from an early point in the sport’s history, and it is something which has largely stuck through the passage of time.

It was made most popular in the 1960s and 70s thanks to the rise of Don Revie, who was Leeds’ gaffer during the club’s most successful ever run. His effect on the Yorkshire club helped to mythologise both the man and the moniker. 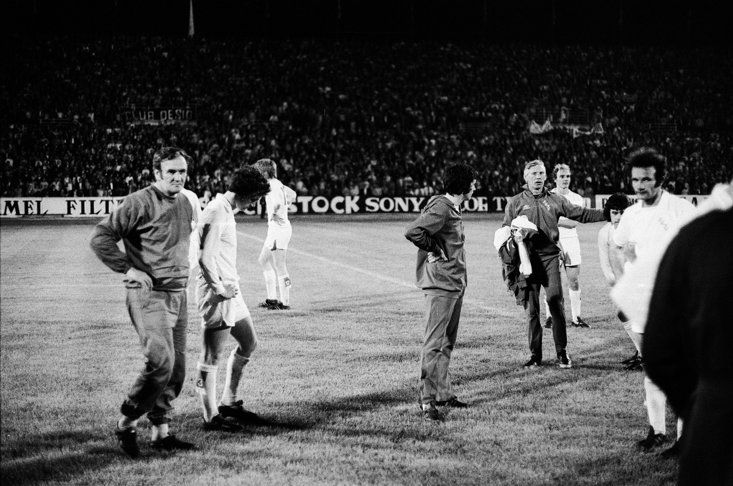 However, it wasn’t to everyone’s taste. When becoming manager of Coventry City in 1961, just months after Revie’s Elland Road appointment, Jimmy Hill insisted on players calling him ‘JH’ as opposed to gaffer or boss, since he was a fan of neither of the popular terms.

These days, the name has become more known for its use in football than in any other walk of life. Just watch the Amazon Prime Video series ‘Tottenham Hotspur: All or Nothing’ for evidence of its prevalence in the modern game, as Jose Mourinho is shown to have embraced this most very British of terms for its leaders, proving its not just the Dyches, Warnocks or Sam Allardyces of the world for whom the term is reserved.

Harry Kane is chief among those referring to the Special One as ‘Gaffer’, although one glance at Kane’s emotional goodbye to Mourinho’s predecessor, Mauricio Pochettino, suggests there’s nothing particularly special about the England captain’s reverence of his current boss.

“Gaffer. I’ll be forever thankful to you for helping me achieve my dreams,” Kane tweeted of Pochettino following the Argentine’s Spurs sacking in November 2019. “We’ve had some amazing moments in the last five and a half years that I will never forget.”

Yet just a few months on he was busy using the same pet name for his new manager. “Next year would be the first chance for the Gaffer to have a pre-season,” he told the International Champions Cup website in early 2020. “It’s been good working with him. What you see is what you get. He’s an honest guy.” How quickly footballers move on!

But ‘Gaffer’ isn’t only reserved for friendly messages between player and manager, with Danny Rose’s furious confrontation with Mourinho during the Amazon series over a lack of playing time being littered with such references.

“Gaffer, I just want to know what the problem is,” demanded Rose. “You know exactly what I mean. How I’m being treated. I was very excited when you came as manager, but if you don’t want me to play I’d rather you just told me now and I’ll stay at home, Gaffer.”

Rose went on to say that those picked ahead of him had been, well… rubbish, to put it politely, and demanded a meeting with chairman Daniel Levy, who presumably is the Chief Gaffer, or Grand-Gaffer. 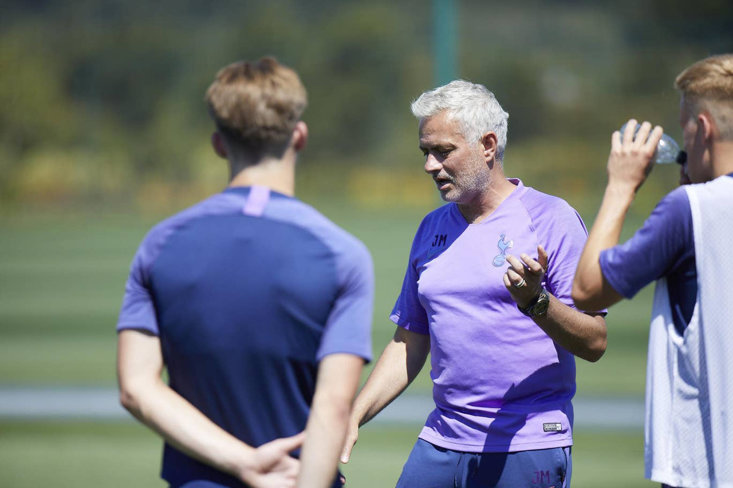 It might seem strange to most of us that a term coined by 19th-century factory workers for their similarly modestly-paid shift managers should remain in usage for sporting icons of 2020, especially given the way football has evolved so rapidly since those early days. But perhaps there is something endearing about its continued use in the modern day.

While many can claim that football has forgotten itself in the rush for clubs to be bigger and better than ever, there is something of an innocence and a respect in the name ‘Gaffer’ still being bandied around today. Whether players are tearfully waving you goodbye, embracing you as one of their own, or simply wanting to know why you hate them so much, it's nice for a manager to be known by a time-honoured nickname when there are so many worse things they could be calling you.

‘The Gaffer’ remains as integral a part of the British game as the football itself.

x
Suggested Searches:
Manchester United
Liverpool
Manchester City
Marcus Rashford
Premier League
More
football
On This Day: Luis Figo Joins Real Madrid In The Most Controversial...
In the midst of the summer transfer window 2021, we rewind the clock 21 years, look back at the [ ... ]
sports
Olympic Opening Ceremony At Tokyo 2020 Was A Reflection Of Japan's...
The Japanese opening ceremony was not what we've come to expect from opening ceremonies. The eerily [ ... ]
sports
Who Are Team GB's Flag-Bearers For The Olympics Opening Ceremony?...
The Olympic Games are going to look a little different this year, and Team GB are starting as they mean [ ... ]
sports
Muhammad Ali, James Bond And A Jetpack: The Best Ever Olympic...
Across all sport, few events, if any, inspires unity and collectivism in the same way the [ ... ]
boxing
Last Round, Folks: When Boxing’s Invisible Champion Was Blitzed...
History has not been kind to Floyd Patterson. Countless world champions have drifted through the annals [ ... ]
cycling
The Music Man And The Machine: When Wiggins And Froome Went...
Brits, find a better sporting highlight reel than that of 2012. We dare you.  Simply put, it was [ ... ]
golf
McIlroy’s Open Victory: When Neither Garcia, Fowler Nor Fowl...
“The Open is the one that we all want, the one that we all strive for and to be able to hold his [ ... ]
motorsport
F1's Grey Area Exposed Once Again As Hamilton & Mercedes Take...
As Lewis Hamilton paraded around Silverstone waving the British flag, after winning his home Grand Prix [ ... ]
sports
Make War, Not Love - The Times The Sport Stars Lost It
The case was announced on July 9, 1975: The State of Minnesota vs. David S. Forbes. It became the first [ ... ]
rugby-league
Rugby League Eyes ''Best World Cup Ever Seen'' After 2021 Event...
The Rugby League World Cup this week got the go-ahead to take place as planned in 2021, and with less [ ... ]
football
The Best British Player Ever? It's Time To Put Some Respect...
Happy birthday to Gareth Bale. At 32, the Welshman can boast a career that others can only dream of. [ ... ]
golf
Bryson DeChambeau's ''8-Year-Old'' Tantrum Has Nothing On Di...
Sports people are role models, so goes the consensus, but things don’t always play out that way [ ... ]
football
An Inside Look At England's Euro 2020 Campaign From The Kitmen...
England has a squad packed full of young stars. This summer, led by national treasure Gareth Southgate, [ ... ]
motorsport
The Birth Of Silverstone Thanks To A Race Between A Prince,...
April 14, 2019, China, and the third race of the season at the Shanghai International Circuit. Lewis [ ... ]
boxing
Pandemonium In Atlanta: The Last Great 15 Round Title Fight
The 1980s was a transitional period for the world of boxing. The fledgling cruiserweight division, inaugurated [ ... ]
football
From Jules Rimet To The FA Cup, The Sporting Trophies That Went...
When the World Cup trophy was stolen in London on 20 March 1966, it threatened to plunge the most famous [ ... ]
football
Stuart Pearce Lauds Pivotal England Star Raheem Sterling Ahead...
Ahead of Euro 2020, not many people had Raheem Sterling starting for England. The Manchester City man [ ... ]
football
Mancini v Southgate - The Tactical Battles Which Could Decide...
Could England become European champions on Sunday night? They have shown so far in Euro 2020 that they [ ... ]
tennis
The Day A Flawless Fred Perry Stormed Wimbledon To Win A £25...
“Packed Centre Court sees strenuous struggles for Championships!’ screamed the Pathé [ ... ]
boxing
From Knocking Out A Horse To Missing Gold Medals: Five Of Boxing's...
Boxing has had its fair share of folklore since the introduction of the Queensberry Rules, the generally [ ... ]
us-sports
The Luckiest Man On Earth: When Lou Gehrig Bid A Fond Farewell...
In the Friends episode, The One Where Old Yeller Dies, the character Phoebe Buffay (Lisa Kudrow) watches [ ... ]
football
Portugal, Fernando Santos And An Identity Crisis - What Next...
Portugal’s disappointing last-16 exit at Euro 2020 has not given rise to an angry mob calling [ ... ]
football
Underwhelming Netherlands Were Destined To Fail Under Serial...
It took just a few seconds for Netherlands’ Euro 2020 campaign to go from excellent to exasperating [ ... ]
football
Pocket Playmaker Marco Verratti Is Still Italy's Most Important...
Marco Verratti might be the best Italian footballer never to have played in Serie A. Having made his [ ... ]
football
Lewandowski Gets Goals, Sousa Shows Style, But Poland Follow...
With the exception of Euro 2016, the Polish national team follows a pattern. Five years ago in France [ ... ]
cycling
10 Tour De France Facts You (Probably) Didn't Know That Will...
Life is a numbers game. We’re not talking Henry Hill and Goodfellas here, the mob-run racket that [ ... ]
tennis
History Makers, Record Breakers And Pimms: Why Wimbledon Is...
After a year away, Wimbledon, arguably the most anticipated Grand Slam and hottest ticket on the [ ... ]
boxing
Blood, Guts And Determination: Remembering Lewis And Klitschko's...
On June 21, 2003, after 44 fights, 41 victories, 32 knockouts and three heavyweight championships, Lennox [ ... ]
football
Covolan, Alisson, Chilavert And The Most Dramatic Goals Scored...
Football, as everyone knows, is the beautiful game. It is renowned for producing shocking and wonderful [ ... ]
football
Rap, Rock And Remembering Total Football - Welcome To Johan...
“Johan Cruyff was an innovator and this play will also break with the convention of musical,” [ ... ]