Andrew Cotton knew something was wrong. He lay on the beach as rescuers came to his aid. For most people, a million fears would race through their mind.

For Cotton, there was only one worry.

“I can remember when they were cutting the wetsuit off and all I was thinking of was the time out of the water.”

The big wave surfer and Red Bull athlete had broken his back while attempting to ride a 60-foot wave in Nazare, Portugal.

“I was thinking: ‘Ok that’s three months, maybe six months out of the water,’” he admits to The Sportsman in an exclusive interview.

These are the dangers with such extreme sports, but despite all of the difficulties Cotton could have been facing, missing out on surfing was his biggest concern.

The day the accident occurred was nothing new for Cotton. He’s been surfing since he was seven years of age and it’s always been an “obsession”. But however experienced the surfer, the water can be unpredictable as Andrew found to his cost almost two years ago.

“It was just one of those things. It’s all about the lines that I choose to surf on the waves and I like to try and do the same for a small wave as I would for a 50-foot wave and I think that’s the exciting part of it,” he explains. “It comes with consequences. When you take the wrong line on a high wave the consequences are high.

“I just read the wave wrong. To be fair, it changed, and that’s the magical thing about waves, no two waves are the same. I read it slightly wrong and went to the bottom, and I was already committed when I realised the wave wasn’t going to do what I thought it was going to do.

“I wiped out and propelled forward, and as I landed I’ve had a compression fracture of my back. It was like jumping onto concrete and landing on your bum. That is the way I would describe it.

“It went shooting up my back. When I was flying through the air I couldn’t pinpoint that because there was nothing I felt. But when I hit, and I was hit with such force, I knew straight away what I had done. That impact, I’ve never had anything hit me that hard.

“I was kicking myself. Big wave surfing is all about timing and it’s about peaking at the right time, with the right conditions, and I was so angry with myself because I felt I had committed so much, so early on in the session and the waves weren’t actually due to peak until the afternoon.

“I hadn’t yet seen the best of the waves. I wasn’t thinking I’m never going to surf again, it’s just part of it.” 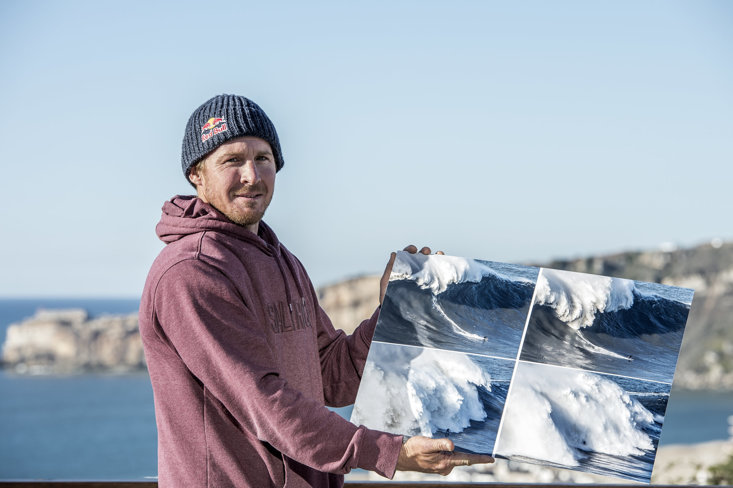 Cotton suffered such a catastrophic injury that it would put many off from returning. But not Andrew - amazingly, he worked his way back. With the help of Red Bull’s physios and the care of his nearest and dearest, he was back surfing again within a year.

He admits he was hesitant to get back on the board but was soon back to loving the ride.

“I was apprehensive, and you don’t want to fall, but the first two waves were really quite safe,” he says. “By the end of the session it felt like the injury had never happened and it was the last thing on my mind.

“I think, and this is my opinion, many extreme sports, you cannot do it half-heartedly, you’ve got to throw yourself into it. It’s when you’re half-committing that you get injured. Whether you’re up a mountain, on a bike, a snowboard, going down a massive wave... if you do it half-committed you’re going to get hurt.

“The waves are constantly changing, it’s nature. As a surfer, sometimes you almost feel like you can’t do anything wrong, and other days, no matter what you do you’re missing the waves, not hitting it and feeling awkward.”

Was there ever a time he thought of packing it all in after what he had been through?

“I did question it, ‘Is it worth it?’ and kept going over it in my head,” he admits. “Some days you totally think ‘f*** it, it's not worth it, what am I doing?’ It’s not until you actually get back out into the sea...

“When I first got back in I felt I needed to take it easy, take it safe. But then the wave comes and you just don’t want to.

“You don’t question it anymore because it feels so good and so natural and the hunger is still there. I think if I went and the hunger wasn’t there, I’d maybe think it’s time to move on, but that’s not the case, you have to go with gut feeling.

“It’s been exciting for me really as it’s a relief, you have those months of recovery and those questions and self-doubt but then you get back to the sport and still want it. That’s a huge relief.”

While he was aided in his recovery, he insists the mental battles were much more testing than the physical difficulties he endured while overcoming such a setback.

“The mental aspect is more testing, 100 per cent,” he says without a moment’s hesitation. “Not being able to do sport, seeing your mates get waves, the questioning, the self doubt; all of those things make you lie awake at night.

“Physically it’s actually quite rewarding because I’m very much a doer and you can see yourself physically getting fitter, week by week.

“If you do what the physios tell you… I was so fortunate to have Red Bull, they have the best physios, the best people to see and having them there to support me made it quite easy.

“You could see your progression over the weeks and they were testing me and telling me where I was at, so it was the mental battles that you have and it’s just you.”

Cotton is a professional of extreme talent, regularly seeking out the world’s biggest waves for the biggest thrills.

“It’s not the adrenalin you think it is. It’s an adrenalin like meditation. It’s those moments where there is so much happening.

“It’s so quick but it’s actually in slow motion and seconds become hours. That’s not every wave, but for the biggest waves and those significant rides. I think I’ve had three or four waves when time stands still.

“I surf and I give it everything, I want it to be exciting. I don’t take stupid risks but at the same time I like to put it all on the line. You can surf all day and come out fine. It’s like a footballer who puts in 1000 tackles and in one of those tackles you could end up getting injured.”

He explains that he likes to give it everything, putting it “all on the line” but insists this isn’t his life mantra - he’s much more laid-back and careful out of the water.

“It’s just on the waves,” he insists with a laugh. “I’m quite conservative, maybe less so when I was a bit younger, but now I save everything for the water and swells. I've got two young kids, they’re into skateboarding and football and I always have to try and put the breaks on a little bit, they’re the things that could put you out of action for certain.”

Now 38, he actually worked as a plumber in his mid-20s as he was “sick of being broke” and needed a trade, while surfing was still just a hobby. He was never really sure if it was a pursuable dream.

“It was always the dream but it’s one of those sports, there’s no real route to become a professional,” Cotton, who was born in Devon, tells us. “I remember saying I wanted to be a surfer at school but was pretty much told ‘You can’t do that’.

“I had the ability. Kids pick up sports, I picked up surfing very quickly when I was young, so I have a skill set which is second nature now.

“I did work in the surfing industry for a considerable number of years and that allowed me to travel and surf.”

He made the move to Portugal in 2010 and hasn’t looked back.

“I found my niche really with big wave surfing, which is even more niche than competition surfing,” he continues.

“There are lots of great technical surfers who don’t want to go near big waves. I just love tackling the fear, the adrenalin, the emotion. It’s very different to the small-wave competitions, which are more gymnastic and technical. I like to take those surf lines and that commitment and that’s why I followed it.”

Now back and raring to go, he has big plans, desperate to find the globe’s giant waves.

“This season, I’m just chasing it really. The plan was to be on every significant swell this winter in Europe, whether that’s in Portugal, Ireland, northern Spain, that’s the goal. By doing that I know I can get that magical wave, the biggest wave ever or a wave that makes you feel like you’re going in slow motion.

“It’s a full body workout,” he explains of his pursuit. “It’s full body and then, unexpectedly, it’s like a 100-metre sprint. There is more to it, you go down, up, run, then at the end you’re fully blowing because you've put 100% into it. It’s full on, that’s the thing about it and why I love it.”