Motorsport
Features
How an old World War II bomber station became one of the most famous tracks in motorsport
Jack Porter
06:55, 15 Jul 2021

April 14, 2019, China, and the third race of the season at the Shanghai International Circuit. Lewis Hamilton, on his way to a sixth championship title, pips his Mercedes teammate Valteri Bottas to win the race and complete Formula One’s 1000th World Championship event.

A mere 999 races earlier, May 13, 1950: A 4.6km circuit on converted English farmland, 325.430 km in total to run. The drivers have an average age of 39, several over 50, the youngest 29. Notable contestants include a Thai prince, a doctor, a Swiss baron, a World War II hero who had tried to escape a POW camp by glider, and a jazz musician. It’s an event so prestigious that it demands the attendance of the King of England. The location for the first Formula One World Championship Grand Prix? An old World War II bomber station called RAF Silverstone.

In 2021, Silverstone is a beacon of Formula One and adheres to its almost unparalleled status in its pristine aesthetic, the former RAF airfield completely transformed. Plans had started to formulate for the new championship season in 1946, with a standardised set of rules leading to what would become known as Formula One, and eventually the Drivers’ Championship.

The first British Grand Prix would be held two years later, in 1948, the course commissioned to a farmer who owned a pig farm in the middle of the field. He duly designed the circuit around the pig farm, separated by oil drums and hay bales. 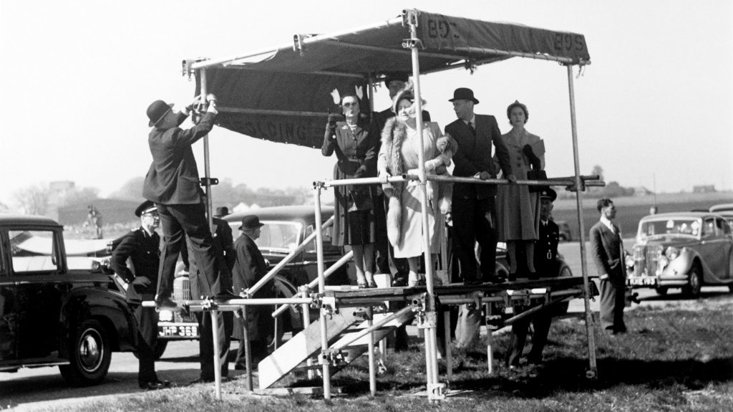 The debut F1 season took place five years after the conclusion of the Second World War, and the inaugural race at Silverstone brought together nine different nations. Though there were races throughout the year and records would only be counted from seven: the British, Monaco, Indy 500 (which stopped being counted towards the World Championship in 1960), Swiss, Belgian, French and Italian Grand Prix. Points were awarded to the top five finishers in each race (nine for first place, then six, four, three, and two). The points tally from each driver’s best four races would then be tallied to decide the championship outcome.

On a warm, sunny May day in the Northamptonshire countryside, with ideal driving conditions for a dry course, 21 drivers took the grid from qualifying. Approximately 200,000 spectators congregated for the spectacle. The first world championship race had two titles, known officially as the Grand Prix d’Europe. It was the first time that the title had ever gone to a race outside Italy or France. However, as the race was held in the United Kingdom, it was also designated the title of the British Grand Prix.

King George VI arrived in a grandiose Daimler limousine, accompanied by his wife and daughters Princess Elizabeth and Princess Margaret. It remains to this day the only time a reigning monarch has attended a British motor race. 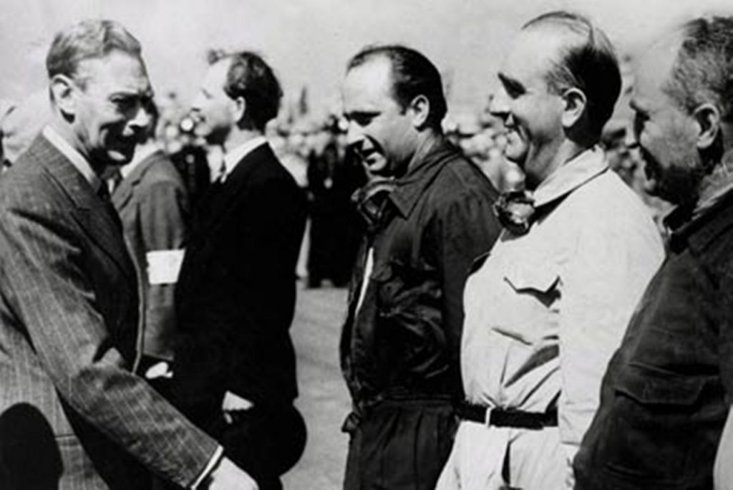 Any potential home advantage wasn’t to be for the Brits, with the race dominated by the Italian Alfa Romeo team, the first time the vehicles had ever touched English soil. With the four cars the team entered, the speed advantage was apparent throughout qualifying - all four occupied the top four positions on the grid - and the race itself.

The winner by 2.6 seconds was the Italian Giuseppe ‘Nino’ Farina, a Doctor of Political Science, crossing the line at 90.95miles per hour. Farina would eventually win the inaugural World Championship at the conclusion of the season in September, his only title before retiring in 1954. 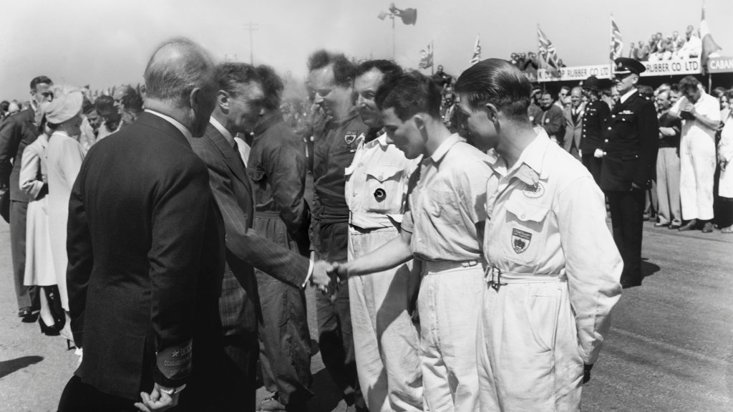 At Silverstone, Dr Nino finished ahead of his Alfa teammates, his compatriot Luigi Fagioli and - in his only career podium finish - Derby man Reg Parnell. Parnell’s Alfetta met an unfortunate hare during the race, severely denting his car. The fourth car had to be retired from the race. The driver was the future five-time World Champion Juan Manuel Fangio.

11 out of the 21 drivers who had qualified finished the race. The participants had included Prince Birabongse Bhanudej Bhanubandh (better known as Prince Bira or B.Bira) of the Thai royal family, Baron Emmanuel 'Toulo' de Graffenried, a Swiss driver who’d won the 1949 edition of the British Grand Prix and well-known jazz musician Johnny Claes of ‘Johnny Claes and the Clay Pigeons’ (his band not his F1 team). Other VIPs included WWII RAF pilot Duncan Hamilton, Tony Rolt, who tried to escape the infamous Colditz prison via a glider, and 1949 24 Hours of Le Mans victor Lord Selsdon.

The late, great Stirling Moss - famously the best driver never to win a World Championship - was then 20 years old and finished in second position in the 500cc support race, having faced a teenage Bernie Ecclestone. 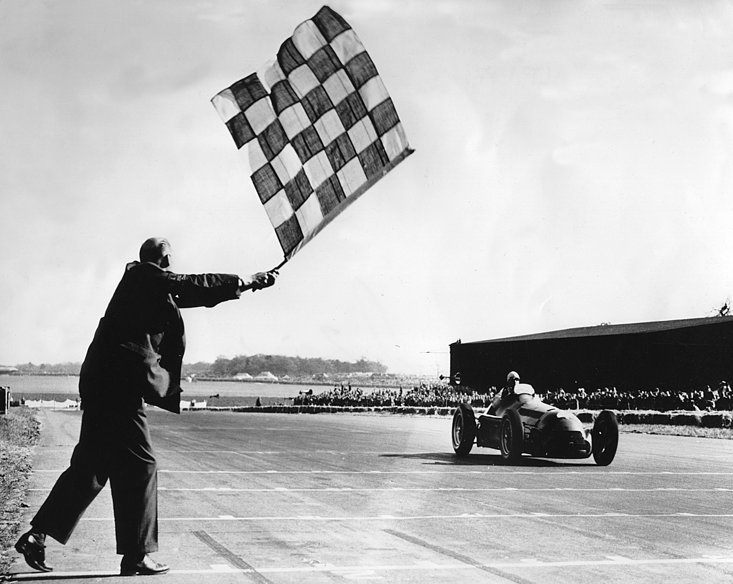 Today, Silverstone remains a bonafide institution. The British Grand Prix has been held at Aintree and Brands Hatch but since 1987 has retained its place in the F1 calendar at Silverstone. Since that 1950 bow, only Monaco and Monza have hosted more F1 races.