Eddie Jones’ England side put in a near-perfect performance against New Zealand but perhaps his side simply had to look into the stands ahead of kick-off to know they were going to win. Richie McCaw may be an All Blacks legend on the pitch but, off the field, his attendance seems to have disastrous consequences for New Zealand.

So when the former New Zealand captain happily posted a message on Facebook before the semi-final showing that he was in attendance in Yokohama, the Kiwis must have feared the worst.

Alongside a picture of him and another fellow former All Blacks captain Sean Fitzpatrick he posted:

“Awesome to be at Yokohama getting ready to watch today’s big game. Backing the boys in Black. Can’t wait.”

Unsurprisingly, this message came back to haunt him after a stunning performance by the English stopped the World Champions in their tracks and handed them their first World Cup defeat in 12 years.

"You jinxed us again!" 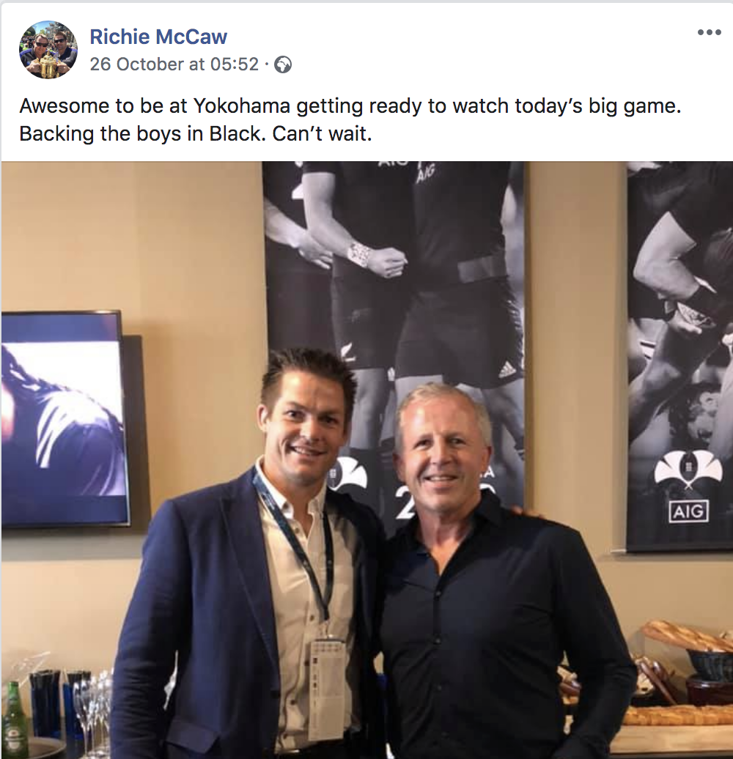 This so-called ‘McCaw curse’ was not evident in his playing career but since his 2015 retirement he has taken to watching his country across several sports with little success. The start of this curse came when the most-capped test rugby player of all time went across to Rio de Janeiro for the 2016 Olympics.

New Zealand’s top golfer Lydia Ko was in poor form across the first six holes with McCaw in the stands but her game dramatically improved once he left to watch his fiancee, Gemma Flynn, play in the women’s hockey semi-final. Ko even holed out from 130 metres in an excellent finish but missed out on a medal due to her poor start.

With McCaw having arrived in time to watch the Black Sticks take on Great Britain in the semi-final, defeat for New Zealand was inevitable. The Brits cruised to a 3-0 win to head to the gold-medal match.

McCaw’s luck didn’t improve after that either. Shot putter Valerie Adams, one of New Zealand’s finest sportspeople, was aiming for three golds in a row and leading with just one throw to go before Michelle Carter beat her with her final throw.

McCaw then watched New Zealand’s rugby sevens side, led by the mighty Sonny Bill Williams, suffer a shocking loss to Japan in the group stage and also watched the Kiwi women fall to a final defeat against fierce rivals Australia in the same sport.

However, he cannot be blamed for the dramatic Super Over defeat in the Cricket World Cup final earlier this year since he was not at Lord’s for the game, but he may well have been watching at home!

Either way, England can be grateful he was in attendance this weekend. Now we just need to find out who is South Africa’s unlucky charm and get them a ticket for Saturday’s final...