Cycling
Features
Josh Quigley was not about to be deterred despite a horrific crash
Gary Quinn
16:00, 04 Oct 2020

Olympic legend Sir Chris Hoy has a lot to answer for. The serial-medal-winner-cum-cereal- shifter is the reason record-breaking cyclist Josh Quigley ended up in hospital with a fractured skull, a hole in his lung, seven broken ribs (seven!) and a broken heel and ankle. We mustn’t forget the heel and the ankle.

It was the dead of night on Highway 36 outside the tiny town of Flat, smack bang in the middle of Texas, where it happened. All Josh Quigley remembers is cycling along in the bitter cold, then a helicopter, and eventually coming round in a hospital bed.

Turns out he’d been hit by a car at 70mph. It was four days before Christmas last year and ‘The Tartan Explorer’ was on the very last leg of his round-the-world cycling tour. He’d completed 14,500 miles, and had only 3,000 left to go, when the 60-year-old woman driver accidentally smashed him off the road.

So what’s this got to do with the saintly Sir Chris? We’ll let Josh explain.

“Five years ago I was in a really bad way. I was overweight, depressed, drinking and taking drugs to numb the pain I was feeling after the breakdown of a long-term relationship,” he openly tells us.

“I no longer wanted to live and even tried to kill myself by driving my car into a wall at high speed.

“But a few months after my suicide attempt I went along to a talk by Sir Chris Hoy and it completely and utterly changed my life. As I was sitting there listening to him talk about his love of cycling, I suddenly thought to myself ‘F**k it, I’m going to cycle around the world’. He was so inspiring. He made me feel like I just had to get on a bike. So that’s what I did.” 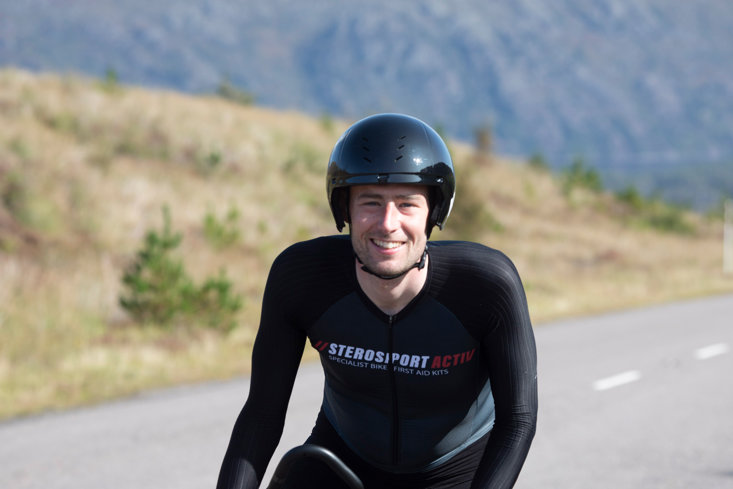 It’s fair to say that Josh Quigley doesn't do things by half. He needed to change his life, and Sir Chris ignited something within.

“I hadn’t been on a bike since I was a child. Now I was in my 20s, 15 stone and desperately unhealthy,” he recalls, “but when I put my mind to something, I can make anything happen.”

And what happened next was extraordinary. Josh Quigley went on a journey, emotionally and physically. And it didn’t end in a Texan hospital. There was more to come from ‘The Tartan Explorer’.

“Not only was I determined to get back on the bike,” remembers Josh, “but I was adamant I was going to finish my round-the-world tour. By the end I was cycling 200 miles a day, for 12 hours at a time. By my calculations, I’d be able to return after my recovery and finish the journey in a fortnight. No bother.” 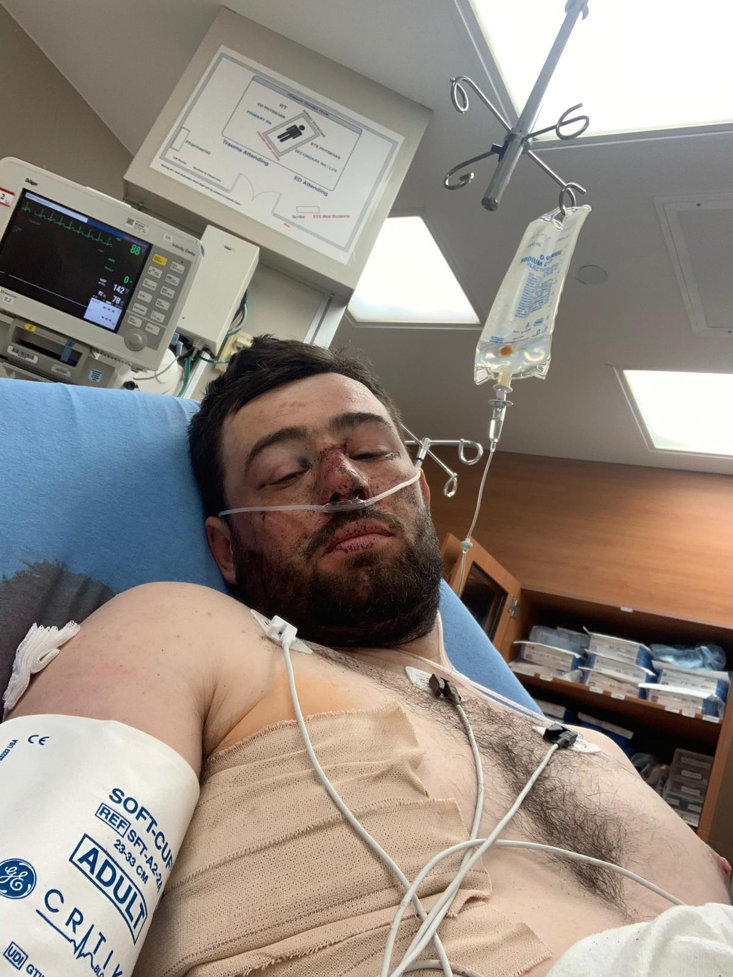 He returned home to Scotland to continue his rehabilitation and by March he was back on the road, doing what he loved best. But there was something bigger on the horizon, something that would stop all of us in our tracks. Covid-19. The global pandemic meant returning to America was impossible for the foreseeable future.

“At first I was devastated,” Josh tells us, “I was so committed to finishing my world tour. I just love cycling, it’s the reason I get up every day. But as the reality of coronavirus hit home, cycling no longer felt as important.”

But emerging from lockdown ‘The Tartan Explorer’ was ready for a new challenge. This time on home soil. And in true Josh Quigley style, he upped the ante. His eyes, head, heart and all those once-broken ribs, were set on breaking a cycling world record. Step forward the NC500.

That’s the North Coast 500 to the uninitiated. A gruelling route of 516 miles, to be exact, around the glorious Scottish Highlands. The overall climb is higher than Mount Everest, and the record to beat in finishing the course was 31 hours and 23 minutes.

This was the figure he and his support team would be laser focused on. That and raising money for the Baylor Scott & White Medical Centre in Texas, where he received intensive care treatment after his crash. 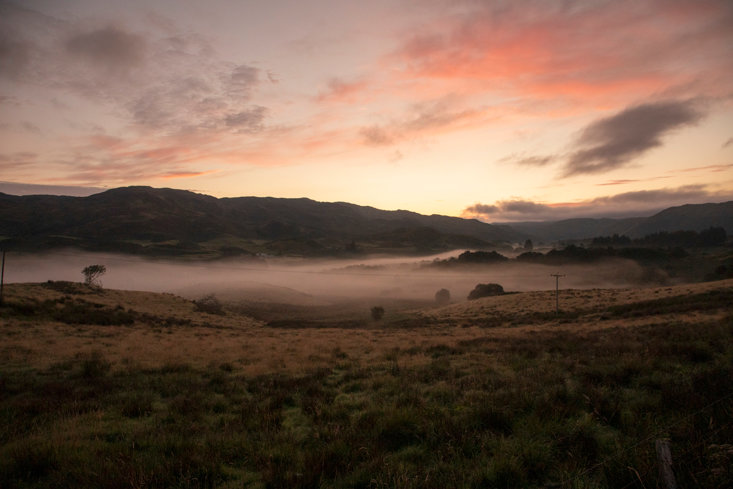 He feels incredibly lucky that the only reminder of his vast catalogue of injuries is a slight twinge in his left ankle, which he assures us only happens when it’s cold. Which is fortunate because he lives in...oh.

But no niggling ankle or biting Highland gale was going to prevent Josh Quigley from giving his all to become the fastest man on two wheels across the NC500. The race strategy was simple. Don’t stop. Keep on moving. And that’s what he did.

“No, I didn’t even stop for any toilet breaks” he says with more than a hint of pride in his voice. He burned off more than 20,000 calories, and tucked into jam wraps, energy gels and an endless supply of Haribo.

“The last 10 hours was really tough,” winces Josh, “My support team was urging me to keep on eating but it was so hard, my stomach was in bits. That was much more painful than my legs or my ankles. And the lack of sleep, that’s a killer too. At one stage I was falling asleep on my bike. But my mantra of ‘keep moving’ did the job and literally kept me going.

“Because we never stopped it meant I could actually cycle at a reasonable rate, that wasn’t the hard part, the toughest part was finding the mental toughness and grit I needed to keep pedalling. The previous record holder had taken a two-and-half-hour break, I took none.”

And the strategy worked. Josh Quigley crossed the finishing line in the bright Scottish sunshine by Inverness Castle in 31 hours and 19 minutes. Four minutes faster than the previous record. 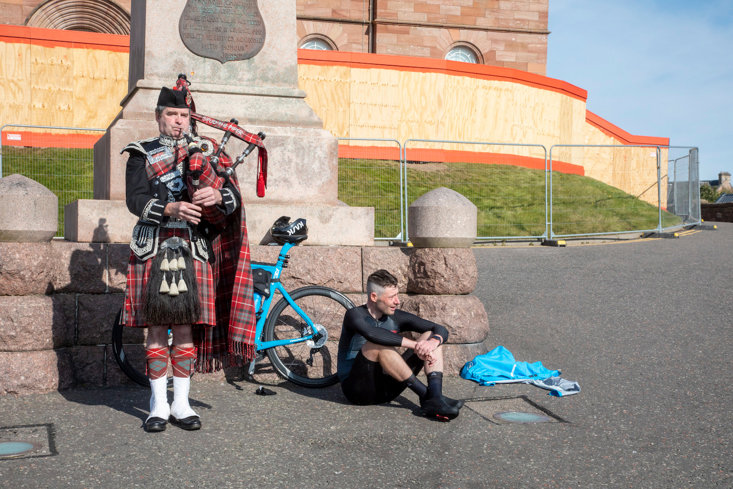 “Seeing Inverness Castle was the best moment of my life,” he beams, “It was so tight right up until the end, but coming round the corner and seeing the finish line made everything I’d been through in my life worthwhile.”

Of course, the Josh Quigley story does not end here. His record-breaking exploits have only urged him to pursue even higher goals. Next up? The Tour de France. But, like his sporting hero Conor McGregor, he’s not here to take part, he’s here to take over.

“The summer of 2026,” smiles Quigley, “that’s when I’m aiming to win the Tour de France. I’m already visualising that in my head.”

Gliding down the Champs-Elysees, Yellow Jersey on his chest, with Sir Chris Hoy cheering on from the sidelines. Journey complete.

x
Suggested Searches:
The Sportsman
Manchester United
Liverpool
Manchester City
Premier League
More
rugby-league
Relentless Australia See Off Samoa To Retain Rugby League World...
Australia are the men’s Rugby League world champions for the 12th time after they put in a relentless [ ... ]
rugby-league
Rugby League World Cup: Live Blog
The Rugby League World Cup returns to England in 2022, with plenty of anticipation over the most wide-open [ ... ]
football
Nottingham Forest v Liverpool: When Super Sunday Was A 'Whole...
“Weekends will never be the same again,” boasted Sky Sports presenter Richard Keys. He didn’t [ ... ]
football
A Team With No Ground & A Ground With No Team, But Bury Are...
It was May 4, 2019. Bury FC were celebrating a hard-earned promotion to League One after a memorable [ ... ]
boxing
On This Day: Sugar Ray Leonard Edges Past Marvin Hagler In Titanic...
"How do you like it, how do you like it?!"   The commentator's words rang out [ ... ]
football
''I Believe In Fairies'' - The Life And Times Of The Extraordinary...
Brian Clough wasn’t just one of the most quotable managers in English football’s long history, [ ... ]
football
Rangnick Right About Fourth Being United's Ceiling, But He Shouldn't...
"We want to finish fourth in the league, this is the highest possible achievement we can get.” [ ... ]
boxing
Angelo Dundee: Three Masterpieces From Boxing’s Greatest Trainer
Perhaps the greatest cornerman of all-time, Angelo Dundee guided the careers of sixteen world champions [ ... ]
boxing
The Day Ali Talked A Suicidal Man Down Off The Ledge Of A Beverly...
Wilshire Boulevard in Los Angeles cuts right through the heart of Beverly Hills. One particularly famous [ ... ]
boxing
From Broadway To Hostage Negotiation: Ali's Best Moments Outside...
Muhammad Ali transcended the world of not just boxing, but sport as a whole, like no other athlete who [ ... ]
football
Zaha's Double, 1989 And 'Poogate': Inside The Brighton v Crystal...
This article first appeared in The Sportsman on 27th September, 2021 Crystal Palace against Brighton [ ... ]
boxing
George Foreman’s Faith: How The 45-Year-Old Heavyweight Stunned...
George Foreman swept through the heavyweight division like a hurricane, obliterating nearly all who [ ... ]
boxing
Last Round, Folks: When Boxing’s Invisible Champion Was Blitzed...
History has not been kind to Floyd Patterson. Countless world champions have drifted through the annals [ ... ]
boxing
The Life And Times Of Heavyweight Legend Jack Johnson
What do Alan Turing, The Doors frontman Jim Morrison and the comedian Lenny Bruce have in common? These [ ... ]
boxing
Pacquiao: From Poverty-Stricken School Drop-Out To Eight-Weight...
"I knew without a doubt I would become a fighter - I knew that the underdog can, and often does, [ ... ]
sports
Hulk Hogan, Mr. T And Madison Square Garden's Five Greatest...
It’s named after the fourth President of the USA. It’s where George Harrison had his concert [ ... ]
snooker
VR Mishaps, Pig Farms And American Hustles: When Ronnie O’Sullivan...
As it's snooker legend Ronnie O'Sullivan's 46th birthday, we thought we'd take [ ... ]
sports
Meet The Man Who Climbed Everest, Partied For A Week, Then Climbed...
This article first in The Sportsman on 08/12/19 There’s nothing normal about Nirmal Purja. After [ ... ]
motorsport
Frank Williams - A Formula One Pioneer Whose Team Went To The...
For much of the 1980s and 90s, Williams Racing was the biggest name in Formula One and Frank Williams [ ... ]
football
How Cantona Made Manchester United The Dominant Force Of The...
It started with Leeds United making an enquiry about signing Denis Irwin and finished with Manchester [ ... ]
football
Almost 30 Years Since THAT Goal, Davide Gualtieri Is Still San...
8.3 seconds, 28 years ago. That’s all it took for part-time footballer, part-time computer [ ... ]
boxing
River Wilson Bent Talks Coventry City, Newborn Baby And British...
“Imagine if Coventry City made it to the Premier League and I brought the British title home for [ ... ]
football
Neil Warnock - The Record Breaking Football Lover That Just...
When the whistle blows at Kenilworth Road for Luton Town's home match against Middlesbrough on Tuesday [ ... ]
football
Leicester's City Progress Is Proof That Vichai's Vision Has...
On this day three years ago Leicester City lost their influential owner, Vichai Srivaddhanaprabha in [ ... ]
rugby-league
The Birth Of The Grand Final: Rugby League's Biggest Of Big...
“I’ve said it for years… the last game of the season should be the most important,” [ ... ]
football
Celebrating Arsenal's Invincibles With The Stats That Tell The...
There’s Sergio Agüero winning it in Fergie time. Liverpool finally ending 30 years of hurt [ ... ]
football
From Balotelli To Bullard, The Premier League's Greatest Ever...
It's been a full decade since Mario Balotelli lifted his shirt in Manchester City's 6-1 [ ... ]
motorsport
On This Day: Rookie Lewis Hamilton Loses F1 Title In Controversial...
On this day in 2007, we witnessed perhaps the greatest end to a Formula One season we have ever seen. [ ... ]
motorsport
How Lauda's 140mph Crash Marked The End Of The Age Of Innocence...
There are few worse moments to lose control than when driving at 140 miles per hour. The events on just [ ... ]
football
FA Cup Round-Up: Brilliant Buxton Make First Round As Dorking...
It was a night when Dorking Wanderers saw their dreams dashed by Hayes and Yeading, Stratford made some [ ... ]