Mma
Features
From fighting 'Popeye' to filming Rocky IX, there are plenty of things the UFC champ could reveal
Elliott Bretland
16:55, 23 Oct 2019

Conor McGregor heads to the homeland of his nemesis, Russia’s Khabib Nurmagomedov, this Thursday to meet the press and make a mystery announcement on his future plans.

So, what could those plans be? Alright, it’s probably whiskey, but as the internet slowly melts with anticipation, The Sportsman has made some alternative, informed guesses (and a couple of uninformed ones too)…

Khabib 2: Return to the Octagon

McGregor may have been out of action for a year but he could be set for a comeback.

The 31-year-old hasn’t stepped into the Octagon since he fought Nurmagomedov last October at UFC 229, a fight which saw him tap Khabib in defeat, mumble “It’s only business” and then watch in amazement as his opponent sprung over the wall to commence the mother of all brawls with his entourage.

If it was only business, it wasn’t a great day at the tills. Khabib got to Conor’s friend Dillon Danis with a flurry of fists, just as Khabib’s close friends and family met Conor inside the ring with some big slap action and the Nevada State Athletic Commission got to both fighters with a six-month ban and fines of $500,000 and $50,000 respectively.

So obviously, we want to see them fight again. He’s in Russia after all. Bookmakers Parimatch, for whom McGregor is a brand ambassador, revealed: "Perhaps he will make statements about his imminent return to the octagon." If there’s one thing we know about the UFC, it is that anything’s possible.

If Khabib is busy then he could always take on the Russian ‘Popeye’, Ruki Bazuki, who injects Synthol (the muscle oil, not the mouthwash) into his biceps to make them big enough to see from space, if big biceps are the kind of thing you want to look at from outer space.

In this fight we’d back McGregor, as Bazuki lost his first MMA bout, submitted by an elbow choke move placed around his 24-inch bicep!

The Sportsman
@TheSportsman
Ruki Bazuki aka the Russian 'Popeye' who injects Synthol into his biceps to make them the biggest in Russia, lost in his first MMA bout.
He was taken down and submitted by an elbow choke based around his 24-inch bicep... 💪 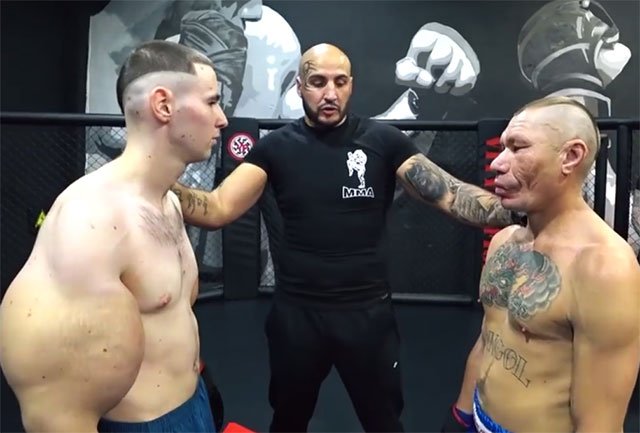 Back in 2016, Conor was somewhat philosophical on his views concerning wrestling. “For the most part, those WWE guys are pussies to be honest,” the Irishman mused. “Fair play to Brock [Lesnar], he fought, but he was juiced up to the eyeballs. How can I respect that?”

And then, of course, Conor being Conor, he changed his mind completely and teased in a tweet earlier this year that he might actually try his hand at wrestling after all.

“Congrats to Ireland’s Becky Lynch, the WWE’s first Champ Champ,” he tweeted in April after Wrestlemania 35. “Wow! What a match these ladies put on! Ronda Rousey is something special in that ring, as is Charlotte Flair of the Flair dynasty! Stephanie McMahon you are right, I could not do what these athletes do. Or could I…”

Brock Lesnar, 42, is no longer in WWE sadly, but in fairness he has always been pretty clear on what he thinks about the two gladiators meeting in any combat situation: “I take s***s bigger than that kid. Come on.”

Here in Britain we have a strong tradition of greeting bears with marmalade sandwiches and nicknaming them after whatever station we found them in. In Russia of course it’s more: “Hello bear, let’s get it on! Fight!” Yes, as a youngster, just a few days after his ninth birthday, Khabib wrestled a bear cub.

Now, two things to note: Conor has a lot to prove after being so easily crushed by his opponent, and Khabib has said he’ll only fight the Irishman again once he has got a few fights under his belt. So what better way of getting straight to the front of the queue than searching out, and taking on, Khabib’s old adversary? To the caves!

In 1985 Rocky flew to Russia to avenge his pal Apollo Creed, who had died after a savage beating at the hands of soviet boxer Ivan Drago. For those of you who haven’t seen the film, Rocky trains by running around in the snow, chopping wood and escaping the KGB. He wins by belting Drago and then shouting: “If I can change, and you can change, everybody can change!” to a weeping Russian audience. Heady stuff.

Sadly, Rocky now lives underneath a small American restaurant, but his young fighter, Creed’s son, is available. Tony Bellew is retired, so perhaps this announcement is Conor’s big move into the movies, playing the new Drago against Apollo’s son, Adonis.

Ok, we’re out of options. Let’s move swiftly on to the most logical choice - whiskey...

There are some wild suggestions the entrepreneur will be promoting his ‘Proper No. Twelve’ whiskey.

McGregor launched his drinks empire after his boxing defeat to Floyd Mayweather Jr in 2017 and it is no surprise it has been a huge success, earning the fighting businessman £763.6million in its first year.

Selling around the world, it is named after the postcode from where McGregor hails in Crumlin, Dublin and he will be keen to spread the word and create a market in a country known for its vodka.

Conor McGregor
@TheNotoriousMMA
Russia 🇷🇺 @ProperWhiskey has landed!!!
See you guys in Moscow!
1155
14115
More
football
From The Ox To Dele Alli, Meet The Photographer Trusted By Football's...
Matt Gordon enjoys PlayStation with Liverpool’s Trent Alexander-Arnold, holidays with rising football [ ... ]
football
Robbie Fowler By Numbers: From L8 to Liverpool Legend
A ferocious storm straight from the heavens hit west London on Wednesday 22 September 1993. Craven Cottage [ ... ]
football
The Crazy, Continent-Crossing, Love Affair...Welcome To The...
5,031 miles. That's the exact distance that separates Aston in Birmingham from the Ghanain village [ ... ]
sports
From Kelly Slater To Serena Williams, The Athletes Stepping...
“We are facing a man-made disaster on a global scale.” Not our words but those of Sir David [ ... ]
football
Fenerbahce's Light Out Of The Dark: When Turkish Women Ruled...
Hearing the cry of ‘Women and children first!’ could understandably take you to that freezing [ ... ]
boxing
Finding Mike - All The Details So Far On Jamie Foxx's Tyson...
Mike Tyson is one of the most explosive and enigmatic sportsmen of all-time. His life has been one of [ ... ]
football
A Wonder Of The Footballing World: Celebrating The San Siro
The position as a modern-day Antipater would be unenviable if one was tasked with nailing down the Seven [ ... ]
boxing
Ken Norton, The Former US Marine Who Used A Self-Help Book To...
Not a soul in attendance, even in his adopted hometown, believed Ken Norton had a chance of beating [ ... ]
football
11 Points And Down In March: Derby County's Nightmare Premier...
It is the 39th minute at Pride Park in front of a roaring 33,000 strong crowd, the majority of whom [ ... ]
motorsport
184MPH On A Push Bike... Meet The Fastest Cyclist In The World
The scorching Bonneville Salt Flats of Utah. As far as the eye can see, the view is only a two-tone [ ... ]
football
Thanks Gaffer - The 19th Century Moniker Modern Footballers...
If you watched ‘The English Game’ on Netflix recently, the countless differences between [ ... ]
football
We’ll Raise Your 27-0 And Give You 31-0, The Biggest Hammerings...
Winning provides happiness. Losing provides wisdom. In football, it takes two sides to create history, [ ... ]
football
Joaquin, We Salute You - Real Betis Royalty Who’s Reigned For...
Eight years. That’s the average length of a professional footballer’s career. Average. Joaquin [ ... ]
football
From The Work Of Art To The Throwback, The Season's Best New...
Leeds United were the first. That’s right, the Elland Road club who are back in the Premier League [ ... ]
tennis
From Stockport Rebel To Hollywood Favourite, How Fred Perry...
“I’m a great believer in trying to look the part. It’s a fetish with me.” For [ ... ]
football
Germany Vs Bayern? Brazil Vs Exeter? These Are The Best Club...
The club versus country row has increased this century, with the soaring popularity of the Premier League [ ... ]
football
Bill Shankly - The Teenage Miner, Midfield Star And Managerial...
Bill Shankly wasn’t only a great football manager, you know. He was one hell of a player too. [ ... ]
tennis
Why John McEnroe Epitomises The Best In Tennis And How It Can...
It’s nearing the end of the long, hot summer. The year is 1984. You’ve got your Member’s [ ... ]
football
Toffees, Trophies And T90s: Rooney’s Football Journey Through...
Wayne Rooney’s right foot was explosive, like a traction engine as Alan Partridge would put it, [ ... ]
tennis
Remembering Little Mo, The Grand Slam Winning 'Killer In Pigtails'
No other player has arguably had such a profound effect on tennis, in such a tragically short space [ ... ]
cricket
It Pays To Be Patient: The Sportsman’s Ode To 140 Years Of Test...
Can you imagine trying to sell Test cricket to the public in 2020, if it was a new invention? Given [ ... ]
boxing
First Glimpse Of Greatness: When Ali Fought Fear With A Parachute...
As he sat there on bended knees in the middle of the aisle, the beads of sweat rolling down his forehead [ ... ]
boxing
The Newport Rocky: The Best British Boxer You’ve Never Heard...
Before David Haye and Tony Bellew, there was David ‘Bomber’ Pearce. A British cruiserweight [ ... ]
us-sports
Vince Lombardi: NFL Legend, Pursuer Of Perfection, Champion...
His name adorns American football’s ultimate prize thanks to his outstanding record as a coach [ ... ]
tennis
Serena Williams Doesn't Need The Grand Slam Record - She's Already...
There is no benefit in asking when it will end, just be glad that it’s happened. And still happening. [ ... ]
football
The Most Successful 'Failure' Ever? Reflecting On Bale's Time...
You’re worth £90million. At home - or rather in your stunning, sunny Spanish villa, hundreds [ ... ]
boxing
Rocky Marciano - The Epitome Of The American Dream And An Age...
With the Great Depression and Second World War firmly in its rear-view mirror, the 1950s saw the United [ ... ]
boxing
Groves, Ali And A Life Inside Boxing: The Sportsman Interviews...
Irish boxing coach Paddy Fitzpatrick is the man you want in your corner. And not just in the ring. He’s [ ... ]
boxing
The Contender: The Reality TV Show With Stallone That Promised...
As the world entered the new Millennium, the sport of boxing and the world of reality TV were at polar [ ... ]
football
Bela Guttmann And The European Curse That Could Last A Century...
In the wide, wild world of football, whilst the tag ‘greatest of all time’ is continuously, [ ... ]