There might never have been a more significant game of football than the one played at The Oval on 16 March 1872. Wanderers beat Royal Engineers 1-0 that day in the very first staging of the FA Cup final, beginning a tradition which remains central to the British sporting calendar to this day.

It all started in the offices of The Sportsman… You’re welcome! The newspaper forerunner of your favourite website held the meeting on 20 July 1871 during which Charles W. Alcock, the FA secretary at the time, proposed the formation of a knockout tournament for all FA member clubs.

Alcock had previous. He had instigated the first-ever international fixture too, placing adverts in The Scotsman newspaper asking for players north of the border who would be interested in taking on an English select side. And so in March 1870, England played Scotland for the first time, with Alcock himself - then 27 - captaining the English XI to a 1-1 draw thanks to a late equaliser from Alfred Baker.

With international football sorted and the title of FA secretary now bestowed upon him, Alcock wanted to organise a national competition - remember, this was still almost a couple of decades prior to the formation of the Football League - and invited other leading football figures to meet at The Sportsman’s London office.

With all seven attendees in agreement, it took the FA little time to organise the first FA Cup competition. Fifteen of the 30 registered teams entered, but logistics put paid to a lot of clubs’ hopes of reaching the inaugural final. Only four of the scheduled seven first-round games took place, while there were several more withdrawals in later rounds.

Alcock’s Wanderers team were one of those to benefit, with their first-round fixture against Harrow Chequers being awarded to the home side when the Harrow team couldn’t raise an XI. Next up they beat Clapham Rovers 1-0 away from home, but then drew their quarter-final fixture against Crystal Palace 0-0. No replay was deemed necessary though, as the uneven spread of the competition had left three quarter-final fixtures and so both Wanderers and Crystal Palace were permitted into the semi-finals. 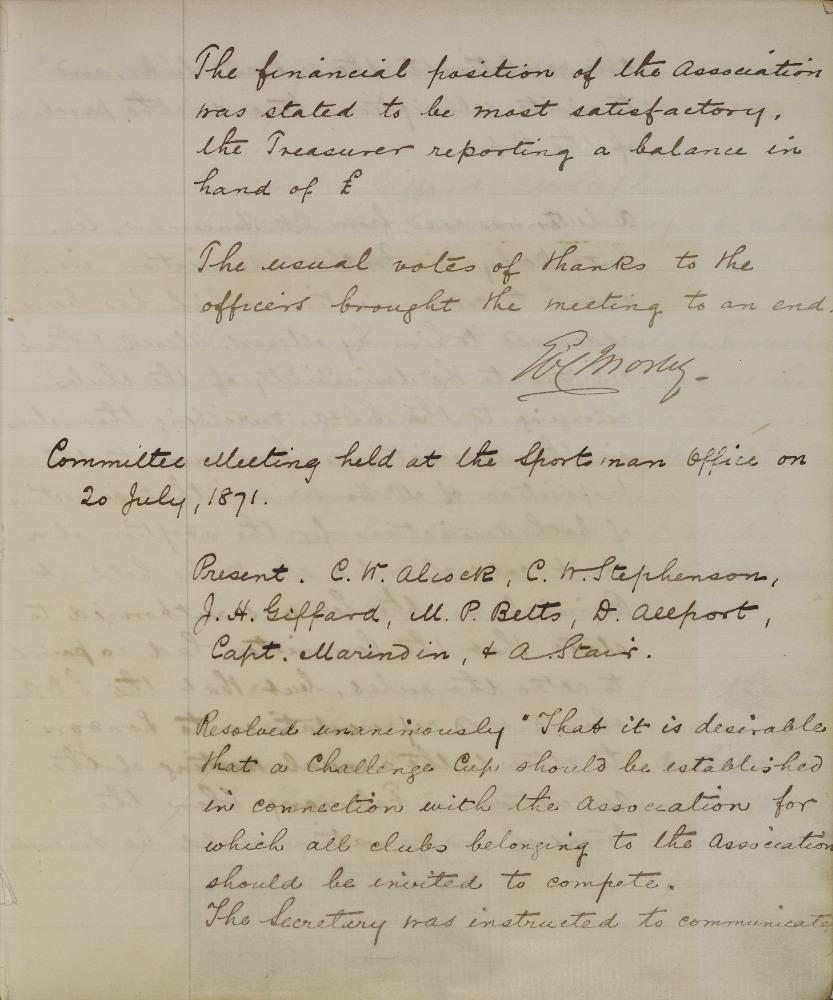 The bizarre nature of the road to the final didn’t stop there though, with Wanderers’ 0-0 draw with Scottish side Queen’s Park in the semi-final meaning that a replay was to be scheduled. But with the Scots not able to afford to get back down to London in order to play a second match, Wanderers were awarded the tie and promoted straight to the final.

And so Alcock and Wanderers lined up at The Oval against Royal Engineers, who had scored 11 unanswered goals in their four-game run to the final. The Engineers were the Barcelona of their day, having become known for their clever passing style in an age where players generally tried to dribble past opponents before countenancing any notion of playing the ball to a teammate.

But it was Wanderers who came out on top in the inaugural final, with Morton Betts’ 15th-minute goal proving to be the decider in front of the 2,000 fans in attendance. Everyone’s favourite FA secretary almost doubled the lead shortly after, but Alcock’s goal was ruled out for a handball in the build-up by teammate Charles Wollaston. Unfortunately/thankfully there was no VAR back then to come to Alcock’s reprieve.

The Field called the final “the fastest and hardest match that has ever been seen at The Oval”, and while it wouldn’t be until the 1880s that the FA Cup final drew a five-figure crowd and really began to draw the attention of the wider public, a long-held tradition had been successfully instigated.

Almost 150 years on, the FA Cup has been through its peaks and troughs but the final still provides the English football season with its iconic denouement. Thanks for that, Mr Alcock.