Football
Features
The Australian striker netted four goals in one of the greatest ever Premier League games
Kris Voakes
09:58, 12 Sep 2021

Everybody loves Leeds United these days. Their carefree style, their bucket-loving manager, their attractiveness in the ‘both teams to score' market. They are a football fan’s dream.

But these are not necessarily new developments. Well, Marcelo Bielsa’s bucket aside. Because back in the early 2000s, they were also worthy of top billing most weekends. Under the management of David O’Leary and with kamikaze chairman Peter Ridsdale spending even more on the squad than he did on goldfish tanks, Leeds were a dazzling prospect more often than not.

Having already edged out Tottenham Hotspur 4-3 thanks to doubles from Mark Viduka and Alan Smith – all four goals coming within the space of 12 second-half minutes – Leeds faced Liverpool at Elland Road on the first weekend of November 2000 needing to recover from an indifferent start to the season. They were also coming up against a Merseyside outfit who had won five matches in a row and would go on to win a cup treble that season, boasting the likes of Robbie Fowler, Steven Gerrard and Sami Hyypia.

What followed was one of the Premier League’s all-time classic encounters, with Viduka writing his name in English footballing folklore.

Liverpool cruised into an early two-goal lead, with Hyypia heading home a right-wing Patrik Berger free-kick inside the opening couple of minutes and Ziege doing similar from a Gary McAllister set-piece from the other flank soon after.

But when the German left-back lingered on the ball midway through the first half, Viduka pounced to steer cleverly over Sander Westerveld to give Leeds a lifeline against the run of play. And the Australian had his side level straight after the half-time break, working his way free between Hyypia and Markus Babbel to head home from Gary Kelly’s cross. 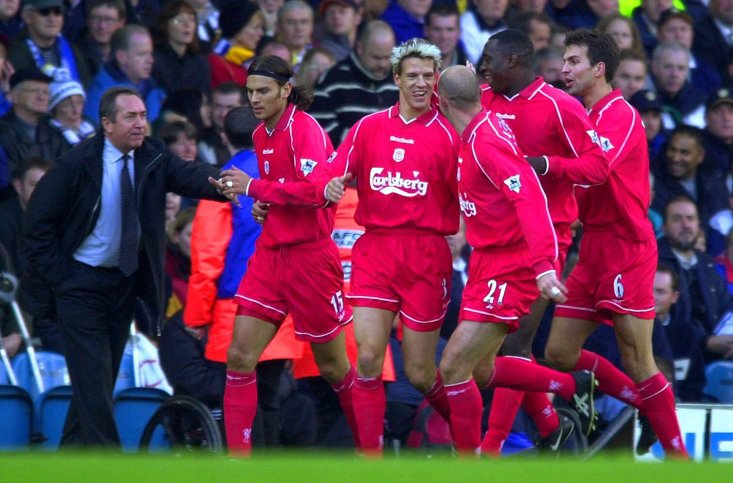 ZIEGE'S GOAL HAD GIVEN LIVERPOOL AN EARLY 2-0 LEAD

With the home fans buoyed, this should have been the moment for their side to push for the three points, but Liverpool hit the front again on the hour mark when Berger steered a lovely reverse pass to Vladimir Smicer, who side-footed a shot across Paul Robinson to put the visitors back in front at 3-2.

Viduka was far from done though. With 17 minutes left, he made a run inside the backtracking Berger, giving Olivier Dacourt a perfect target to hit with a clever through-pass. After an initial heavy touch, the striker’s avenue to goal appeared to have been closed, but he kept his head to turn on the ball and wrongfoot Berger in the process, then blazed a low shot home from an acute angle despite both Westerveld and the retreating Danny Murphy looking decent odds to intervene.

Had it finished there, with Leeds having come from behind twice and Viduka having netted a hat-trick, it would have been legendary enough to the 40,000 who were packed into Elland Road that day. But two minutes later, the former Celtic striker delivered the knockout blow.

The atmosphere had now reached fever pitch, with Liverpool hanging on. And after an initial Dacourt pass came back to the Frenchman in midfield, he again fed Viduka, who beat the offside trap as the visitors’ defenders stepped up and – for the second time in the game – left Westerveld on his backside with the cutest of chips as Jamie Carragher arrived too late to clear the effort off the line. 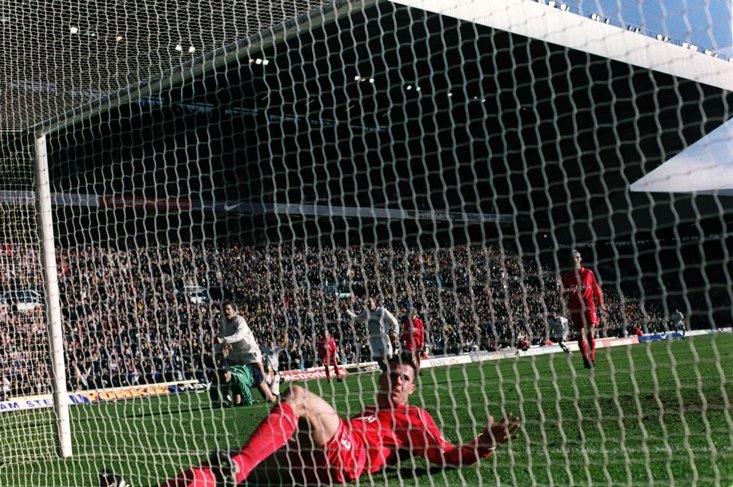 CARRAGHER IS LEFT STRANDED AS VIDUKA MAKES IT 4-3

Leeds’ first lead of the game would be the only one they’d need, with a second 4-3 win in three home league matches helping to boost them in a season in which they would eventually finish fourth in the Premier League and reach the Champions League semi-finals.

They beat AC Milan with a late winner that season and took the scalps of Lazio and Anderlecht on the road. But nothing they achieved during 2000-01 came close to the buzz from seeing Viduka score four times in that thrill-a-minute win against Liverpool.

They host Liverpool again this weekend. The times – and teams – have changed. Fortunes have gone for a roller-coaster ride for both clubs. But just as the pair delivered another 4-3 classic when the Reds came on top on the opening day of last season, there is every reason to believe we could get another mesmerising fixture in West Yorkshire on Sunday. Betfred are offering 100/1 on Leeds winning by the odd goal in seven just as they did 21 years ago.

But could anything truly match Mark Viduka’s fantastic four-goal haul on that sun-bathed day in 2000? It remains one of the Premier League's greatest ever spectacles.