Motorsport
Features
The Brit is on the verge of title number seven
Jack Porter
10:00, 15 Nov 2020

Is he the greatest British sportstar of all time? Whatever your position, there’s no doubt Lewis Hamilton is definitely part of the conversation. On the verge of a record-tying seventh World Championship title, the speedster from Stevenage has dominated Formula One in a way only the esteemed likes of Juan Manuel Fangio and Michael Schumacher have done before him.

But success isn’t achieved as a sole endeavour. Every chequered flag and podium place is the result of a group of people in the background helping with the heavy lifting, which has hoisted Hamilton up to the heavens. Here’s Team Hamilton...

“My dad had an idea to put me in a go-kart. He bought it fifth-hand, from the back of a newspaper. We went to the local DIY store and drove it around, after-hours. And I loved it, naturally.

“We had absolutely no idea what we were doing.”

Those oft-heralded humble beginnings were recollected to David Letterman in 2019. What father -  Anthony - and son - Lewis - were doing was setting the eight-year-old on a course to become the first - and in 2020 still the only - black driver to race in the sport, and potentially the best of them all. The sacrifices his father made to propel his son are well-documented; the triple jobs, the long hours, the mechanic. Anthony and stepmother Linda even remortgaged their home multiple times to fund Lewis’ participation in a sport usually reserved for the rich and the silver spoon speedsters. The family affair ethos is further evident upon the conclusion of a race: younger brother Nicholas is usually in close quarters to inform his sibling he’s smashed it. 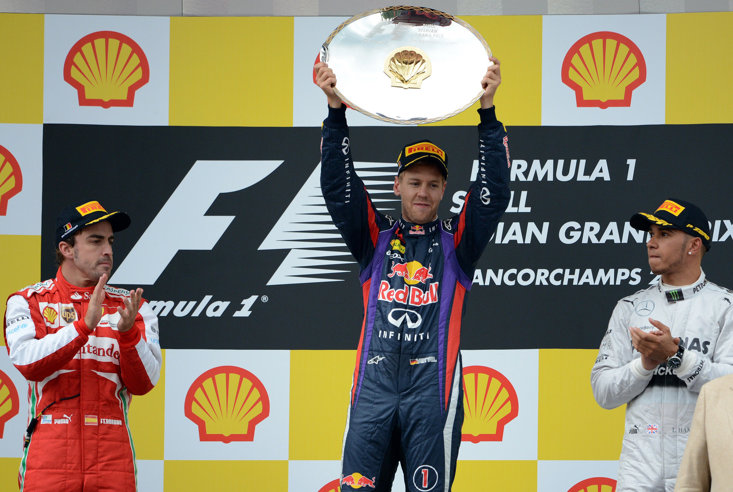 Though in recent years it has been his Mercedes teammates, in first Nico Rosberg and now Valterri Bottas, who have posed the greatest challenges to his domination, Hamilton’s career has been defined by two key rivalries: with Fernando Alonso and Sebastian Vettel. Alonso was formative to Hamilton’s drive in his early years on the circuit, particularly after they were paired up at McLaren in a move which led to more fireworks than first-place finishes.

Vettel’s astonishing feat of four straight titles with Red Bull between 2010 and 2013, while Lewis had to watch on with his single triumph from ‘08, has seemingly driven Hamilton on to surpass the German, who has since languished in Hamilton’s exhaust. Furthermore, now 35 years old, Hamilton has deftly managed to contend with the sport’s upstarts in Max Verstappen, Charles Leclerc et al, keeping these youthful challengers to the throne at arm’s length.

New Zealander Angela Cullen is now well-known as Hamilton’s right-hand woman. She is the complete PA and Personal Wellbeing package, responsible for Lewis’ daily routine, personal logistics, his diet, sleep patterns, and travel arrangements, a role that has developed ever since she joined Team LH in 2016.  That sweeping blonde ponytail is a perpetual presence at race weekends, in the garage, on the grid and she is always ready to hand over his essentials, or bat away unwelcome attention.

“People for sure won’t understand it, naturally, because they see it from a distance, but she has been one of the greatest things that’s happened to me in my life,” Hamilton has said of Cullen.

“She’s focused, selfless and makes my weekends peaceful. Every day I wake up, whatever time it is, she’s just positive – never a single day has she been negative, so that’s very important. You need to be around people who can do that for you, and she’s one of them.”

The bond is purportedly so tight between driver and PA that they are said to even share some of the same tattoos! 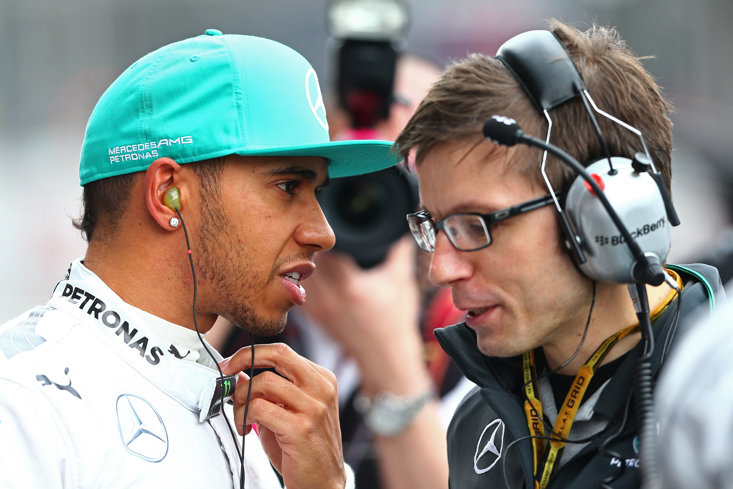 You know the voice. You may not know his face. He’s the guide in Lewis Hamilton’s ear during the Grand Prix weekend. The cool-headed Jiminy Cricket to the pedal-pushing puppet in the cockpit. Pete ‘Bono’ Bonnington has been race engineer to Hamilton ever since the latter joined the Silver Arrows from McLaren in 2013. “I’ve had Bono by my side my whole time here at this team and you can hear our rapport when we’re in a race,” Hamilton has said. He’s both the angel and the devil on the shoulder, imbuing his world-beating driver with a prevailing sense of faith in his team, and reciprocating, reassuring that if he drives his best, at the end of the day, they’ve got Hamilton’s back.

Hamilton’s relationship with Mercedes will become the stuff of legend. However, there would be no Silver Arrow success for either party without the help of an actual legend. The late, great, three-time world champion Niki Lauda helped lure Hamilton to the constructor, and would soon take the Brit under his wing.

"We would talk often after the races and he would be asking things like: ‘Hey, Lewis, what do you need to be better? What do you need?’” Hamilton would explain after Lauda’s passing in 2019. “He was always chasing. I am grateful for the opportunity and forever love Niki. I know he is with us every race in spirit."

Roscoe the Dog! Who else?