Ninety minutes is usually all that separates the football fan from experiencing the spectrum of emotion; the change from walking optimistically into the stadium to either trudging out in disappointment or flying out of the gates in jubilation.

But while most fans head home after the game, German rapper Weekend aims for the studio to turn his lifelong support of Schalke 04 into music. AKA Christoph Wiegand, Weekend grew up in Gelsenkirchen in western Germany, the homeland of the iconic Bundesliga club Schalke 04.  A diehard Die Königsblauen, his new song “Eine Liebe” (One Love) is a collaboration with (an ode to) Schalke 04, to the city of Gelsenkirchen and kit supplier Umbro with its accompanying music video filmed at their home ground of the VELTINS-Arena and in the surrounding city.

Weekend sat down with The Sportsman to talk about why he’s still a sucker for Schalke, and how he’s enjoying the collaboration of his dreams.

So what’s your favourite memory from supporting Schalke 04 over the years?

Schalke’s been my team since I was a little boy. There’s obviously the 1997 UEFA Cup triumph over Inter Milan at the San Siro, of course. I watched that with my father, and it was my first game with him, and my first memory of Schalke with him.

But then, also, in November 2017, there was Schalke vs Borussia Dortmund. Dortmund were 4-0 up at half-time. I was in Frankfurt, and I had a gig. I was the supporting act in front of 15,000 people in the stadium. But the crew and the technicians were all BVB fans. The two rappers on stage, including myself, were the Schalke fans. We watched the game in between sound checks. The first half - terrible! The second half, Schalke came back to draw the game 4-4. The crew left the room quickly! We were alone with the television. 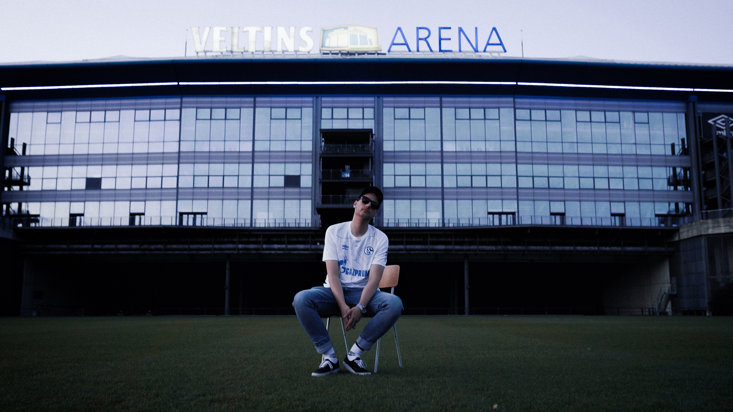 You’re from Gelsenkirchen, the city of Schalke 04 - what makes Gelsenkirchen stand out, and what is about the people and the culture that is so different from the rest of Germany?

First and foremost, it’s historically a mining community. Then in the seventies and eighties there was mass unemployment through the decline of the industry, however, the people in the city make the best of it. They’re very honest with each other, very close to each other, and very straight-talking. Don’t expect lies, back-biting, or hypocrisy. It’s an area with a big heart. It’s not an ‘Instagram’ city, but fundamentally it is interesting and the football club Schalke 04 is the glue of the place. Saturday brings the congregation together, the VELTINS-Arena is the church. Schalke is the religion.

Tell us about this song that you have collaborated on with Schalke and Umbro.

It was important for me to make a song which represented the pathos of Schalke and its supporters. It’s the feeling of power and problems. The issues with the structure of the city it is located in, but the pride that comes from heritage. Basically, bring it down to, ‘This year isn’t good….. onto next year!’

Schalke doesn’t go the easy way. Yes, you could support Bayern and be Deutsche Fußballmeister every year. But when we win it, it’ll be the hard way, and it’ll be great.

How did your collaboration with Umbro begin?

A friend of mine called me up - he was a music video director. He said, ‘Schalke want you, and they want you to make a song.’ He didn’t realise I was a football fan, let alone a Schalke fan! It was a big thing for me. All my friends in Gelsenkirchen are Schalke fans. You know one day I might win a Grammy, but this will be much better!

Was it a fun project to be involved with?

Yes, I think Umbro is extremely cool. This is a true story - I’m not being paid to say this. When I began on this project I was adamant that I wanted to wear my own shoes in the music video. I argued and argued. And then, I saw the Umbros. And I had to back-off! Myself and Schalke fans know that, success-wise, we’re not the number one in our country. Schalke is a bit like an underdog and that matches very well with a British company making their mark in Germany. It’s a great relationship.

You've been rapping a while, and even had a number one album in Germany. Has the music scene changed since you started?

It’s changed a lot. I was just a tall, friendly, shiny blonde-haired boy when I started and it wasn’t always easy to be different from the other rappers. Then the rap game changed, and there came a point where a lot of my contemporaries started to create political and humorous recordings. There was also the momentous shift to the Internet - no-one was buying CDS. I didn’t think it was a bad change. Change is interesting to me.

How do you stand out in a competitive music environment?

My special style was to find special situations and grab and present them in a funny but critical manner, with political statements behind them. I was also a big fan of Mobb Deep, and I think - as a German man - rap music helped me to understand English, though there are different skills to speaking and understanding.

If you weren’t rapping, what would you be doing?

I have a lot of roles in my life. I studied as a social worker, which I worked as for two years, and went back to when I was searching for inspiration for my music, dividing my time between the home, rap, and my working background. The role was important for me because I was working with people who don’t have a life which is as easy as mine. As a result, I believe I got more political. I’m also a father of a two-year old girl - I don’t need to spend time at my gym when I’m looking after her!

Finally, you have a new album, ‘Lightwolf’. What can we expect?

More
cricket
World Cups, Podcasts and Panesar: The Sportsman Interviews Alex...
So you think you know your cricket? Well answer this. When did England first win the Cricket World Cup? [ ... ]
boxing
Fighting Mums, Angry Trainers And Broken Ankles: Boxing's Strangest...
Boxing is a sport like no other. Stick two people in a ring, put pride and money on the line, set them [ ... ]
us-sports
Five Stand-Out Stars Who Stole The Show On Netflix's Last Chance...
“I’ll guarantee I’ll rip your f*cking nuts off if you f*ck up in the game on Saturday. [ ... ]
cricket
Better The Second Time Around: The Redemption of Kevin Pietersen
It’s both apt and ironic that Kevin Pietersen, the brash cricketer once known for his fondness [ ... ]
sports
Be Like Lewis Hamilton: The Athletes Who Overcame Obstacles...
“That was close,” Lewis Hamilton gasped, with possibly the world’s greatest understatement. [ ... ]
boxing
Ali’s Communist Twin: The Boxer Who Turned Down Millions To...
Former featherweight world champion Barry McGuigan once said that "Cuban boxers are genetically [ ... ]
boxing
From Pacquiao To Foreman: The Boxers Who Fought Father Time...
Father Time, more so than anyone they share a ring with, is the most challenging opponent any boxer [ ... ]
football
FC Gueugnon, PSG And One Of The Biggest Upsets In French Football...
A $1 billion operation. The most financially powerful club in world football. The possessor of the two [ ... ]
sports
Kevin Garnett, Uncut Gems And The Sports Star Cameos That Don't...
Sport stars making the successful transition from their respective fields to the big screen is nothing [ ... ]
football
Miners To Majesty: Understanding The Brilliance Of The Royal...
Committed, proud, loud and brave. The Royal Blue. They’re coming for you. And what a shade of [ ... ]
boxing
The Uncivil War: When Roy Jones Jr. Proved He Was The Best Fighter...
With unmatched hand speed, reflexes and movement that defied all logic and an athleticism that made [ ... ]
boxing
Executioners, Roman Centurions And A Harley: Boxing's Best Ring...
When the theme tune to Star Wars reverberated around Madison Square Garden in 1977 as Muhammad Ali made [ ... ]
sports
Meet The Man Behind The Mouthguard That Tells Your Brain How...
If you have watched a rugby match in the past year or so, you’ve almost certainly seen the work [ ... ]
football
Pulisic, Fernandes And The Premier League New Boys Who Tore...
The Premier League 19/20 is finally wrapped up, the final day of the season duly providing all the thrills [ ... ]
sports
Muhammad Ali, James Bond And A Jetpack: The Best Ever Olympic...
Across all sport, the one event that inspires unity and collectivism are the Olympic Games. The nations [ ... ]
boxing
New Bundini Documentary Shows The True Mastermind Behind The...
History hasn’t been particularly kind to Drew ‘Bundini’ Brown. A difficult man to [ ... ]
boxing
The Mike Tyson Interview: ''Living Takes A Lot Of Courage.''
Mike Tyson’s life has been a well-documented roller coaster ride. A difficult childhood, then [ ... ]
snooker
Booze, Women and Snooker: How Alex Higgins Became The Greatest...
Judd Trump aimed for the pocket of the top-left. A difficult angle but potting the red would allow him [ ... ]
sports
Five Pivotal Moments That Made London 2012 The Greatest Spectacle...
2012 was supposed to be the end of the world, remember? The ancient Mayans predicted a civilization-ending [ ... ]
boxing
Last Round, Folks: When Boxing’s Invisible Champion Was Blitzed...
History has not been kind to Floyd Patterson. Countless world champions have drifted through the annals [ ... ]
cycling
The Music Man And The Machine: When Wiggins And Froome Went...
Brits, find a better sporting highlight reel than that of 2012. We dare you.  Simply put, it was [ ... ]
golf
McIlroy’s Open Victory: When Neither Garcia, Fowler Nor Fowl...
“The Open is the one that we all want, the one that we all strive for and to be able to hold his [ ... ]
sports
Hero, Record-Holder And Tarzan: The Life Of Swimming Sensation...
Me, Sportsman. You, Reader. He hung around with chimpanzees, rode around on the back of wild animals, [ ... ]
football
James Brown In Japan: Around The City That Turned To Football...
There is a freshness to the air in the Earthquake Memorial Park in Kobe harbour in Osaka Bay. For those [ ... ]
sports
Make War, Not Love - From Barton To Boet, The Times The Sport...
The case was announced on July 9, 1975: The State of Minnesota vs. David S. Forbes. It became the first [ ... ]
rugby
From Wilkinson's Heroics To Nelson Mandela - Every Rugby World...
Dan Carter's brilliance, Jonny Wilkinson's boot, THAT image of Francois Pienaar and Nelson Mandela... [ ... ]
football
Japan’s Seismic Soccer Success That Helped Heal A Hurt Nation
Japan experienced the biggest heist in the nation’s history on May 12, 2011. The perpetrators [ ... ]
tennis
The Reign Of The Renshaws: When Tennis' Twin Rockets Smashed...
Starter for ten: which male tennis player has won the most consecutive men’s singles titles at [ ... ]
boxing
Pancho Villa: The Fighting Filipino Trailblazer Who Paved The...
As an eight-division world champion, the winner of 12 major world titles, the only man to hold world [ ... ]
motorsport
The Tragedy Of Alberto Ascari, The Only Italian F1 Driver To...
Alberto Ascari was just seven years old when his father Antonio died. Almost three decades later, when [ ... ]
This website uses cookies
Cookies help us and our partners provide statistics. By browsing this website, you consent to the use of cookies in accordance with our Privacy Policy and Cookies Policy.
Accept & Close