Football
Features
Walter Tull was a war hero who was nominated for the Military Cross
Jack Porter
11:00, 09 Apr 2020

Tottenham Hotspur have this week announced that the unfortunate postponement of the football season will be used by their South Korean striker Son Heung-Min to partake in his compulsory enlistment of national service.

Since 1957, South Korea has required citizens between the ages of 18 and 35 to perform compulsory military service, however Son was given exemption from the extended 21-month conscription after he won the gold medal with the national football team at the 2018 Asian Games. He will now instead complete a four-week service in the hiatus and will return to London following the conclusion of his military service in May. It is, of course, extremely unlikely Son Heung-min will indeed see action and service in his month’s tenure in the military.

Over a century before, another Spurs star wasn’t afforded the same privilege in being able to return to this sceptred isle.

Walter Tull, one of the first recorded black professional footballers in the history of the beautiful game, died fighting for his country, for England.

Walter was born on 28 April 1888 in Folkestone, Kent, the son of a Barbadian man who moved to Great Britain in 1876, and an English woman. He lost both parents before he was ten and was brought up in an orphanage in Bethnal Green, East London.

Walter began playing football for the orphanage team, and moving his skill and ability into a career became one amongst a handful of pioneering but oft-forgotten black players from the late 19th and early 20th Century, alongside such figures as Robert Parker, Arthur Wharton, and Andrew Watson.

Picked up by Clapham FC aged 20, in 1909 Walter moved across the capital to sign for Tottenham Hotspur F.C. and became only the second person of African-Caribbean heritage to play in the top division of the Football League when he debuted for Spurs in the September.

He was also subject to extreme racial abuse.

During a game away at Bristol City a correspondent was repulsed by 'a section of the spectators [making] a cowardly attack on him in language lower than Billingsgate.'

"Let me tell those Bristol hooligans that Tull is so clean in mind and method as to be a model for all white men who play football whether they be amateur or professional,” the correspondent declared.

After 10 senior games for Spurs, Tull joined Northampton Town in October 1911 where he made 110 appearances. A memorial for the Cobblers’ former half-back lies near the Sixfields Stadium today.

His actions off the pitch would eclipse his performances on it.

Northampton Town
@ntfc
One of the greatest Cobblers of them all, Walter Tull, was killed in action 102 years ago today. If you want to learn more about his life, achievements and the days leading up to his death, we paid a visit to the French battlefields 2 years ago, watch here 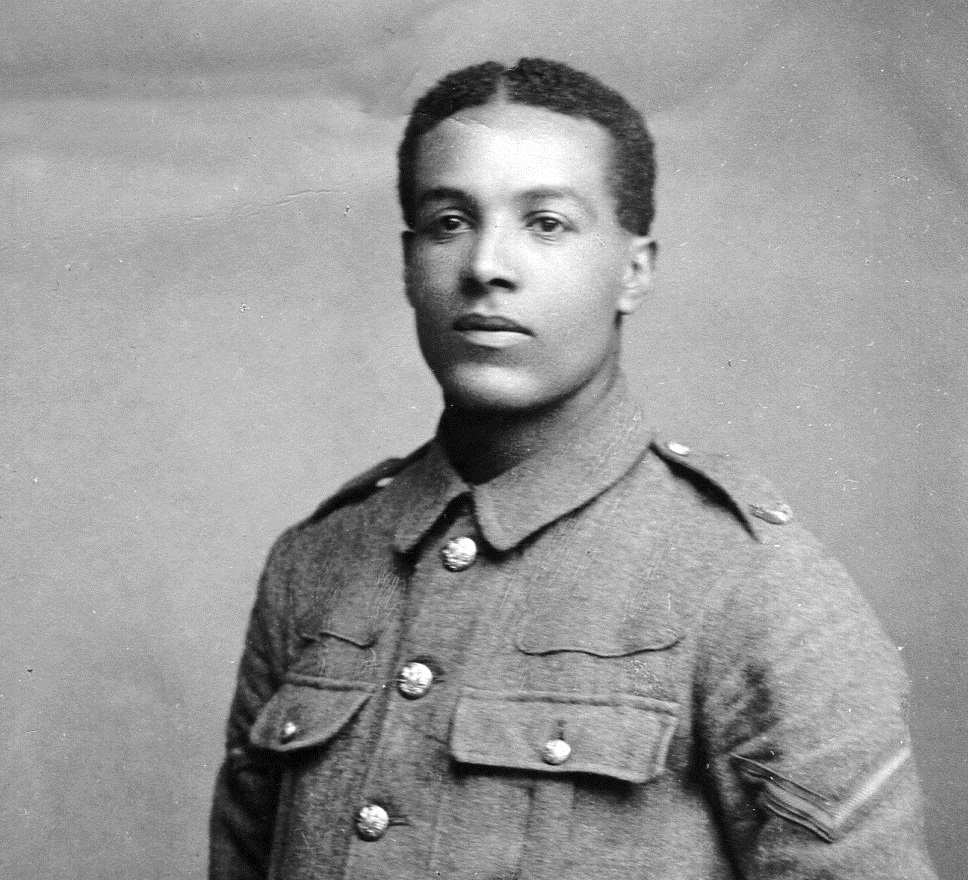 On 4 August, 1914, Britain ‘commenced hostilities against Germany’, triggering the British Empire’s entry into The Great War.

With War declared, the then 25-year-old Walter soon joined the 17th (1st Football) Battalion of the Middlesex Regiment as a Lance-Corporal and in 1915 served in France.

After being treated for shell-shock, he fought in the Battle of the Somme, one of the most infamous conflicts in history in which more than three million men fought and one million men were wounded or killed.

In 1917, the Commanding Officer of the 23rd Battalion recommended him for a Military Cross for bravery after Walter guided 26 of his men on a night-time raid deep into enemy territory, which involved crossing a treacherous river. All of the British soldiers returned unharmed, the assault successful.

At the time of the First World War, British army rules forbade a ‘person of colour’ being commissioned as an officer. Only those of “pure European descent” were supposed to be granted the honour.

However, arriving at the Italian Front in 1917, the newly-promoted Lieutenant Walter Tull became the first credited black officer in the history of the British Army, and the first to lead white troops.

BlackYouthExcellence
@BlackYouthXcel
U.K. BLACK HISTORY:
U.K. FIRST BLACK ARMY OFFICER
-
In Nov. 2018, British Army's first black officer, Walter Tull's face was created on Ayr Beach. He enlisted in the army in 1914, rose to become a 2nd Lieutenant and died in the Second Battle of the Somme at the age of 29. 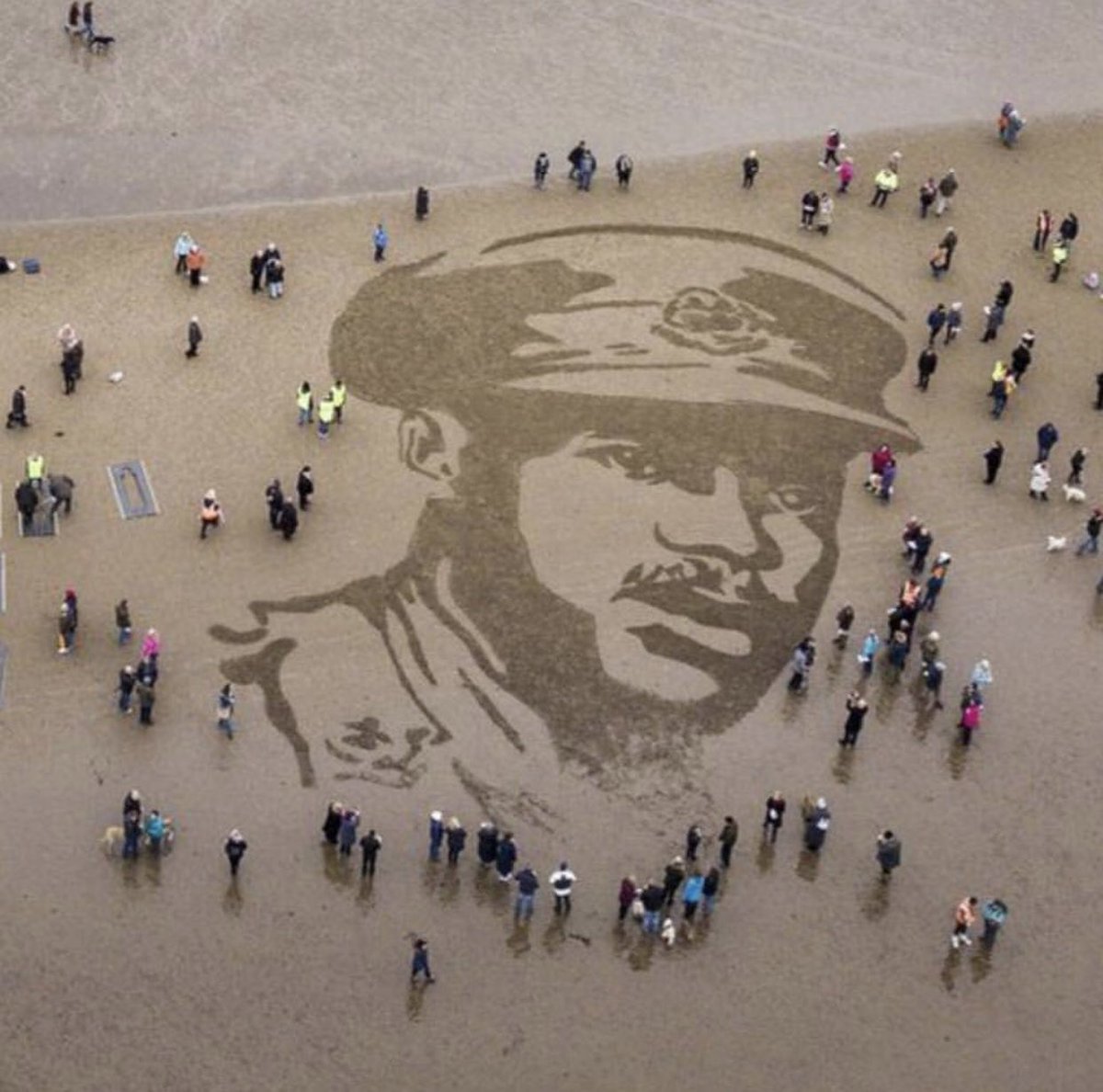 Not just a pioneer on the pitch, Tull is now considered the first African-Caribbean mixed heritage man to be commissioned as an infantry officer in the British Army.

His training in Ayrshire for the position led him to sign for Scottish football club Rangers, where his footballing career would resume upon the War’s conclusion.

On 25 March 1918 leading another assault on the Western Front, Walter Tull was shot by enemy fire and died on the field in northern France aged 29.

The affection Walter had gained from his troops resulted in an impassioned but failed attempt to rescue his body, but which now lies in an unmarked site where 34,784 other brave men fell with no identifiable grave.

Heroism can rarely be accurately measured but the half-Barbadian orphan, a true trailblazer of the world’s most popular sport and paragon of courage and bravery on the battlefield to become a casualty of one of the deadliest events ever seen, should today be considered the British beau idéal of the quality.