Motorsport
Features
The F1 pit lane reporter has been there at every turn during a sensational campaign
Jennie Gow
18:00, 15 Dec 2020

Where do you even start to review the 2020 Formula One season? Like everything else this year, it has been one of the most unpredictable and dramatic periods in motor racing history. And as an F1 journalist, it has been a privilege to be a part of the action at a time when absolutely nothing has been normal.

There have certainly been some stand-out moments by which 2020 will be remembered for Formula One fans. Here are just five of them…

At the start of the season I got on a plane to make the long flight to Australia. I wasn’t sure it was the right thing to be doing as I was fairly convinced travelling during a global pandemic was a ‘little silly’ but that’s my job.

Arriving at the track felt like nothing I can remember. We were told to keep our distance from the drivers, but not each other. It all felt so wrong. The next piece of news that started to filter out was that several mechanics were to be tested and would self-isolate. It became clear the race could not go on but the decision-making was slow.

I still remember standing in the press conference room with 200 or so journalists, all of us listening to Lewis Hamilton… "I am really very, very surprised that we are here,” said the world champ. “I think in motorsport it's great that we have racing, but I think it's really shocking that we are all sitting in this room.”

The fans initially arrived and were gathered in large groups at the gates, which remained closed. Eventually, hours after the decision should have been made, the event was cancelled. It was an utterly bizarre experience to be part of.

Grosjean escapes from a raging fireball 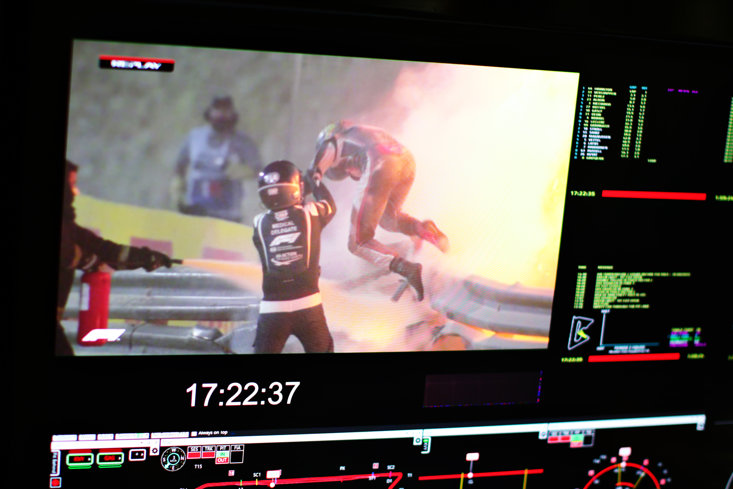 Without doubt when we think back to 2020 we will think about Covid-19, cancelled races and Lewis Hamilton’s record-equalling seventh title. But the image that will stay with me forever is the moment Romain Grosjean found superhuman strength to escape from the fireball that engulfed his Haas car at the Bahrain Grand Prix at the end of November. In my time covering Formula One I’d never seen anything like it.

After touching wheels with Daniil Kvyat and smashing into the barrier, Grosjean remained in his burning car for 27 seconds before managing to escape. It truly was one of the most spectacular and appalling crashes I have ever had to report on.

A smiling Romain described his near-death experience a few days later, and while it was great to see him looking so well it brought a lump to my throat listening to him. The father-of-three said, “I relaxed and thought I was going to die, then I thought a lot about my kids and thought ‘I’m not going to die today’.”

It is testament to F1 that this most hideous crash didn’t end in a fatality. Next time I see Romain I will lose all sense of professionalism and give him a massive hug. He’s the F1 driver who cheated death.

Gasly takes the most unlikely of wins in Monza

The race in Monza was certainly strange. Lewis Hamilton should have won it in a boring and slightly predictable GP after his failure to spot that the pit lane was closed. Following his penalty, all sorts of chaos happened in the pit stops, resulting in Pierre Gasly in his Alpha Tauri taking the win.

Pierre’s best friend was Anthoine Hubert – a French F2 driver who died after a crash at Spa last year. This win was for the two of them, and capped an emotional year which saw Gasly demoted from Red Bull to their sister team. There were tears in the eyes of many as he stood on the top step of one of best podiums on the world. Amazing. 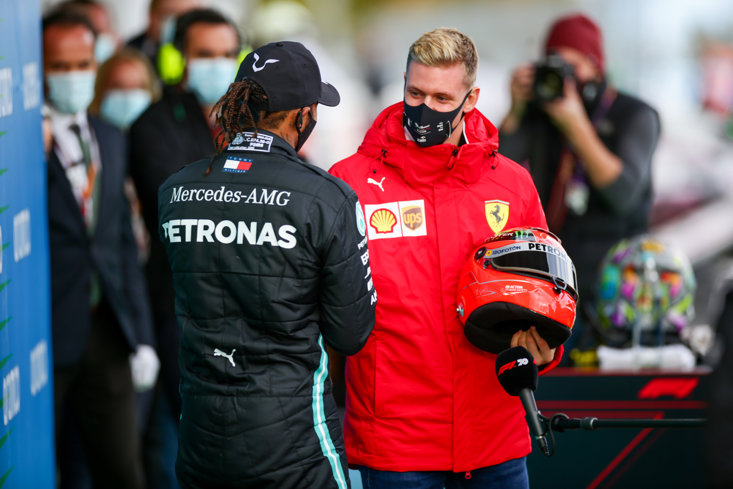 I first met Michael Schumacher at the 2011 British Grand Prix. It was my first year working in the sport and I had to go and interview the German in the Mercedes motorhome. I don’t think I’ve ever been more nervous before an interview, since this was the man I had grown up watching on TV, his skill, his skulduggery, his success – he was the reason so many started to watch F1 and now I was going to sit down and have a ‘chat’ with him.

If he had retired from the sport and gone on to ‘pop into the paddock’ I’m sure the passing of the all-time race wins record from Schumacher to Hamilton would have been marked but not marvelled at. However, that wasn’t the case because of the skiing accident on 29 December 2013 which has resulted in a media blackout, with no one really knows the fate of the seven-time world champion.

That meant the passing of the record to Hamilton was tinged with sadness and emotion, so when Mick (the spitting image of his father) presented Lewis with his dad’s helmet following the Brit’s record-equalling 91st win at the Eifel Grand Prix it was a moment that made my voice wobble on air. You could feel your heart break a little for what the Schumacher family have gone through. Mick told me this week in an interview that is was an important moment for him to fulfil “a sign of respect from my family to him”.

"I'm honoured, I don't even know what to say," Hamilton said. "Just seeing his dominance for so long, I don't think anyone, and especially me, didn't imagine that I'd be anywhere near Michael in terms of records. So it's an incredible honour, and it's going to take some time to get used to it."

My final pick for moment of the year was when George Russell got Lewis Hamilton’s seat for the Sakhir GP after the champ’s positive Covid test. Russell is clearly a talented chap but in the Williams (the slowest car on the grid) it’s almost impossible for him to even score a point, let alone win a race.

So it was an exciting prospect to see him in the Mercedes for a race so we could see what he could really do. He was just 0.026 seconds off getting pole but then in the race itself he took the lead and everyone held their breath. Could he really win?? No, of course the fairytale didn’t come true, as a tyre mix-up and then a puncture saw him slide back down the field, but he did his absolute best and it shows the future of British motorsport is in safe hands.