Football
Features
Guardiola is giving the impression of a man ready to make a change once more
Rebecca Knight
06:55, 11 Dec 2019

There’s no place like home. That’s what Dorothy would have us believe anyway, after she landed in Oz and desperately wanted to get back to Auntie Em in Kansas. Pep Guardiola looks like he’s thinking pretty much the same about Lionel Messi and Barcelona right about now.

Dorothy managed to turn up in Oz with one of her biggest threats eliminated, as her house fell on the Wicked Witch of the East. Pep managed to turn up in England just as a house fell on Jose Mourinho’s reputation. However, as anyone who’s seen Wicked knows, the Wicked Witch of the West proves much harder to get rid of for Dorothy, and it’s turning out to be a similar story for Pep.

Jurgen Klopp isn’t going anywhere with a bucket of cold water doused on him - in fact, far from melting after losing the Premier League title last season by a single point, he waltzed off down the yellow brick road with the Champions League trophy in his arms. Said Champions League trophy has become a thorn in the side of Guardiola, who must be hoping the Good Witch turns up pretty soon, so he can ask for help getting it this season.

Guardiola has become increasingly unhinged of late and as the massive 14-point gap opened up between the reigning champions and the champions-elect, no one can deny Guardiola has struggled. So have his side, but Pep’s favourite dramas of acting the underdog and looking for moral victories and sympathy aren’t so readily available.

Manchester City are a state-run club, and claiming you can’t compete with other teams in the league, moaning about your back-up players who cost more than most team’s star players, or saying you were outpriced for Harry Maguire isn’t going to win you any fans. Nor is claiming a player who managed to create a massive storm with an offensive Twitter post didn’t need educating. Guardiola seems to spend more time talking about Liverpool than Liverpool fans do these days, and the moral high ground is long gone - if it even existed in the first place.

The English media love to build a person up only to knock them down, and Pep’s time in the sun with both the media and the fans is over. He even managed to become a trending gif after his ‘twice’ meltdown when City played Liverpool. 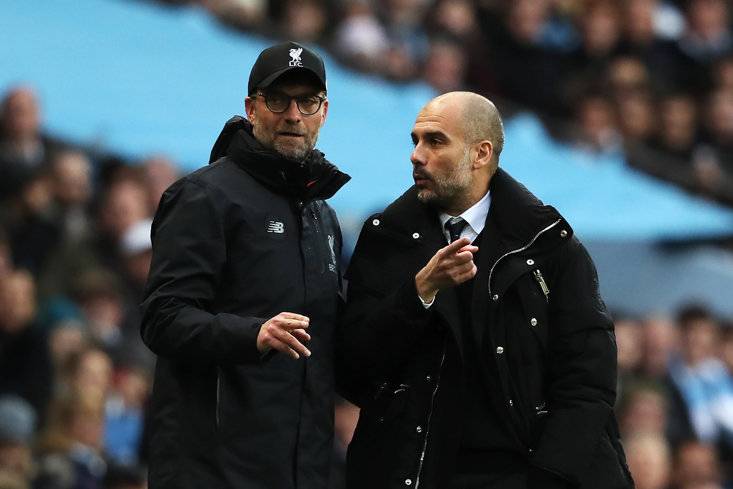 At Bayern Munich, that didn’t happen. Bayern are such a huge club that you’re protected in the press, and it’s almost impossible not to win the league and domestic cup if you’re a half decent manager - which Pep clearly is.

In fact, only a fool would deny that he’s one of the best in the world. At Barcelona, the club might have the GOAT, and may have had the best side in the world under Pep, but they will always be the underdogs, the Catalans who have been treated so badly and oppressed in comparison to Real Madrid.

Pep was almost untouchable at Barcelona. He won it all, and was the one who chose to leave, after the job drained him to the point of no return. Those years spent sparring with Jose Mourinho took more of a toll on Pep than many realised - first with Mourinho at Inter, then at Real Madrid, but Guardiola left Barcelona on a mighty high.

His time at Bayern saw the mask slip ever so slightly - by the end there were faint whispers about his inability to win the Champions League. Semi-final thrashings by Spanish sides didn’t help the cause, and Pep knew it was time to up sticks and begin the project many felt would be the longest of his career.

Guardiola had every resource he could have dreamed of at his fingertips and has been allowed to buy with abandon. Claudio Bravo is a massive flop? No issue. Here’s the blank cheque-book for Ederson. Need more full-backs than kids have teddy bears? Sure, let’s go on down to the football version of Build-A-Bear. You get the picture. But there was one thing Pep hadn’t counted on - Jurgen Klopp.

A man who’s pretty much universally liked and known to be a great guy off the field, Klopp has managed to turn Liverpool into a winning machine - and balanced the books while he was at it. It’s that which Pep can’t stand - and for such a perfectionist, someone who is so OCD, someone who clearly cares what the public perception of him is, for Klopp to be not only winning, but beating Pep at his own game in terms of the free-flowing football and going one better financially, it must sting.

Of course, that’s not to diminish the back-to-back titles he’s won as Man City boss. People were talking his side up as the best ever last season, but this term the drop-off has been evident, and you get the impression Pep doesn’t want to stick around for another few years if there’s an alternative. 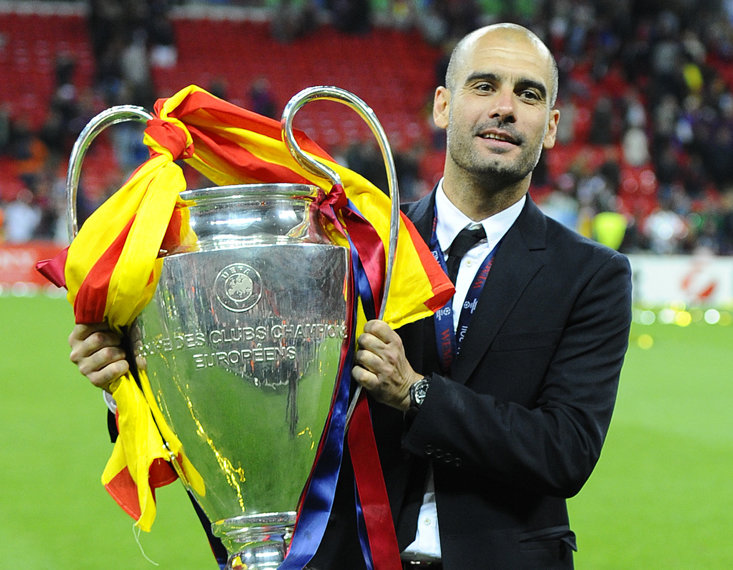 And boy is there. Barcelona will dispense of Ernesto Valverde’s services come the end of the season unless they win the treble, and even then, he could be doomed. Messi is coming to the twilight of his career, and needs a manager who understands him and how to get the best from him. Guardiola is that and then some. A return to Barcelona and the chance to win the Champions League for the club who have craved it for so long almost to the point of obsession might be too hard to pass up.

Guardiola’s own father has made it clear that the door is always open for a reunion with his old club, and if he fails to win the Champions League with Man City this season, the chance to link up with the one man he seems to need in order to lift the European Cup, Lionel Messi, could be key. Likewise, if Pep does win the Champions League with City, he could well see that as job done.

There’s literally nothing left to win in England, and if he has become as fed up as his expressions suggest, with Klopp living rent-free in his head, Guardiola might decide the best option is to click his heels three times and say ‘there’s no place like home.’

More
boxing
Mia St. John - The Boxing World Champion Using Her Power For...
Mia St. John had a purpose in life. It was, in her own words, “to kick somebody’s ass”. [ ... ]
football
From The Ox To Dele Alli, Meet The Photographer Trusted By Football's...
Matt Gordon enjoys PlayStation with Liverpool’s Trent Alexander-Arnold, holidays with rising football [ ... ]
football
Robbie Fowler By Numbers: From L8 to Liverpool Legend
A ferocious storm straight from the heavens hit west London on Wednesday 22 September 1993. Craven Cottage [ ... ]
football
The Crazy, Continent-Crossing, Love Affair...Welcome To The...
5,031 miles. That's the exact distance that separates Aston in Birmingham from the Ghanain village [ ... ]
sports
From Kelly Slater To Serena Williams, The Athletes Stepping...
“We are facing a man-made disaster on a global scale.” Not our words but those of Sir David [ ... ]
football
Fenerbahce's Light Out Of The Dark: When Turkish Women Ruled...
Hearing the cry of ‘Women and children first!’ could understandably take you to that freezing [ ... ]
boxing
Finding Mike - All The Details So Far On Jamie Foxx's Tyson...
Mike Tyson is one of the most explosive and enigmatic sportsmen of all-time. His life has been one of [ ... ]
football
A Wonder Of The Footballing World: Celebrating The San Siro
The position as a modern-day Antipater would be unenviable if one was tasked with nailing down the Seven [ ... ]
boxing
Ken Norton, The Former US Marine Who Used A Self-Help Book To...
Not a soul in attendance, even in his adopted hometown, believed Ken Norton had a chance of beating [ ... ]
football
11 Points And Down In March: Derby County's Nightmare Premier...
It is the 39th minute at Pride Park in front of a roaring 33,000 strong crowd, the majority of whom [ ... ]
motorsport
184MPH On A Push Bike... Meet The Fastest Cyclist In The World
The scorching Bonneville Salt Flats of Utah. As far as the eye can see, the view is only a two-tone [ ... ]
football
Thanks Gaffer - The 19th Century Moniker Modern Footballers...
If you watched ‘The English Game’ on Netflix recently, the countless differences between [ ... ]
football
We’ll Raise Your 27-0 And Give You 31-0, The Biggest Hammerings...
Winning provides happiness. Losing provides wisdom. In football, it takes two sides to create history, [ ... ]
football
Joaquin, We Salute You - Real Betis Royalty Who’s Reigned For...
Eight years. That’s the average length of a professional footballer’s career. Average. Joaquin [ ... ]
football
From The Work Of Art To The Throwback, The Season's Best New...
Leeds United were the first. That’s right, the Elland Road club who are back in the Premier League [ ... ]
tennis
From Stockport Rebel To Hollywood Favourite, How Fred Perry...
“I’m a great believer in trying to look the part. It’s a fetish with me.” For [ ... ]
football
Germany Vs Bayern? Brazil Vs Exeter? These Are The Best Club...
The club versus country row has increased this century, with the soaring popularity of the Premier League [ ... ]
football
Bill Shankly - The Teenage Miner, Midfield Star And Managerial...
Bill Shankly wasn’t only a great football manager, you know. He was one hell of a player too. [ ... ]
tennis
Why John McEnroe Epitomises The Best In Tennis And How It Can...
It’s nearing the end of the long, hot summer. The year is 1984. You’ve got your Member’s [ ... ]
football
Toffees, Trophies And T90s: Rooney’s Football Journey Through...
Wayne Rooney’s right foot was explosive, like a traction engine as Alan Partridge would put it, [ ... ]
tennis
Remembering Little Mo, The Grand Slam Winning 'Killer In Pigtails'
No other player has arguably had such a profound effect on tennis, in such a tragically short space [ ... ]
cricket
It Pays To Be Patient: The Sportsman’s Ode To 140 Years Of Test...
Can you imagine trying to sell Test cricket to the public in 2020, if it was a new invention? Given [ ... ]
boxing
First Glimpse Of Greatness: When Ali Fought Fear With A Parachute...
As he sat there on bended knees in the middle of the aisle, the beads of sweat rolling down his forehead [ ... ]
boxing
The Newport Rocky: The Best British Boxer You’ve Never Heard...
Before David Haye and Tony Bellew, there was David ‘Bomber’ Pearce. A British cruiserweight [ ... ]
us-sports
Vince Lombardi: NFL Legend, Pursuer Of Perfection, Champion...
His name adorns American football’s ultimate prize thanks to his outstanding record as a coach [ ... ]
tennis
Serena Williams Doesn't Need The Grand Slam Record - She's Already...
There is no benefit in asking when it will end, just be glad that it’s happened. And still happening. [ ... ]
football
The Most Successful 'Failure' Ever? Reflecting On Bale's Time...
You’re worth £90million. At home - or rather in your stunning, sunny Spanish villa, hundreds [ ... ]
boxing
Rocky Marciano - The Epitome Of The American Dream And An Age...
With the Great Depression and Second World War firmly in its rear-view mirror, the 1950s saw the United [ ... ]
boxing
Groves, Ali And A Life Inside Boxing: The Sportsman Interviews...
Irish boxing coach Paddy Fitzpatrick is the man you want in your corner. And not just in the ring. He’s [ ... ]
boxing
The Contender: The Reality TV Show With Stallone That Promised...
As the world entered the new Millennium, the sport of boxing and the world of reality TV were at polar [ ... ]