Rugby
Features
If not for Wayne Shelford, the haka would have been canned years ago
Simon Lillicrap
14:00, 29 Oct 2020

The haka is unparalleled. Nothing else in the sporting world creates so much anticipation, ignites so much passion or can strike fear into the opposition quite like this epic pre-match tradition. As the All Blacks line up against Australia for the third game of the Bledisloe Cup on Saturday, they will once again honour their Maori roots before kick-off by performing the Kapa O Pango. That's right, the current variation is not called simply 'the haka', since there are different types, respresenting different origins, each with its own meaningful name.

But the haka hasn’t always been held in such high esteem. Oh no friends, in fact 35 years ago it was destined to be scrapped altogether, until one man, one legend, stepped up.

A man who tore his scrotum and kept on playing, despite needing 18 stitches. A man who knocked out his opponent in a World Cup semi-final and avoided a red card. A man who epitomised what the All Blacks were all about and didn’t lose a single game as captain. He goes by the name of Wayne ‘Buck’ Shelford, and he’s the man who saved the haka.

“Without Wayne Shelford there would be no haka now,” New Zealand rugby journalist Jamie Wall and co-author of ‘Facing the haka’ tells The Sportsman.

“If the All Blacks had kept on with the old, untrained version then pressure would have come for them to just drop it.”

You see, in the 1980s the haka was in a bad way. Only performed on away soil, and never practised, it was for the majority of its existence an uncoordinated, out of time jig, more likely to make their opponents keel over with laughter than fear. With the very first World Cup on the horizon, All Blacks captain Buck, who is of Maori descent, took his team by the balls and transformed the haka. 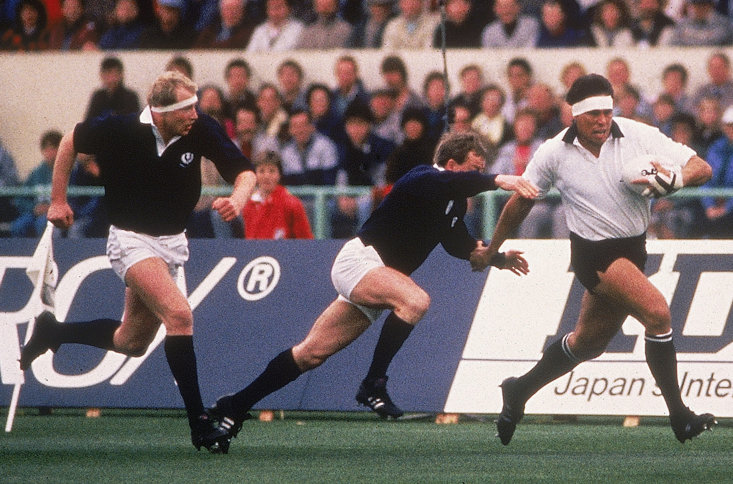 SHELFORD BREAKS A SCOTLAND TACKLE AT THE 1987 RUGBY WORLD CUP

“He was the guy who just drew a line in the sand and said, ‘right, we are going to do it properly or not at all,’” says Wall. “Someone of his manner and his knowledge was able to make that call and because he was the biggest, most fearsome guy in the team it was pretty hard for anybody to say no!  He was also the first one to say ‘okay, we are going to set aside 15 minutes at the end of training to practise the haka.’”

And the swashbuckling Buck was also the man who made the decision to perform the haka ahead of every game, not just selected tour games. No excuses, go hard or go home.

Come the 1987 World Cup, which was co-hosted by New Zealand and Australia, the haka was now something the players revelled in. They were uniform and neat, and New Zealand’s success in winning that tournament, combined with the huge increase in television audience, meant the haka was seen and respected around the world.

“It showcased a lot of New Zealand,” author Wall explains. “The All Blacks are really brand ambassadors for our culture so it is in our best interest to do it properly and show off what our culture means to the world. It is the one unique thing we have, our Maori indigenious culture. You can't replicate that, you can't find it anywhere else.”

Buck’s career naturally waned in the early 90s, but his legacy lives on in the haka. As the sport turned professional in 1995, its popularity and profile increased, as the line between sport and entertainment became ever more entwined. And as the sport of rugby evolved, so too has the haka. 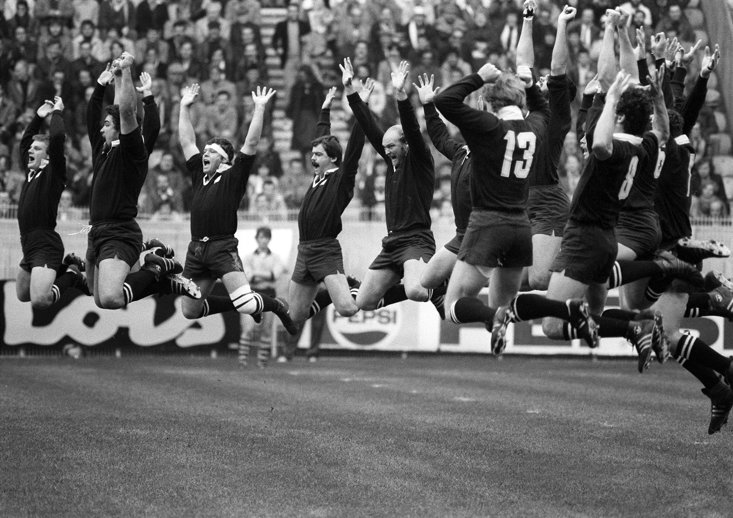 THE TRADITIONAL JUMP ENDING WAS REPLACED IN 2005

For over 100 years, the All Blacks jumped in the air at the end of the haka, you can see in all of the old footage online that this was a key part of the routine. However, in 2005, they did away with the jump for a few reasons and, of course, Buck once again was the pioneer of this crucial change.

“There were a couple of players like Buck who just refused to jump at the end because they thought standing there and looking staunch was more intimidating,” says Wall. He was right too. The famous stare down at the end of the haka now produces some of the finest images in sport, but there was another big change that meant the jump was lost. The introduction of a new haka.

In 2005, Kapa O Pango, a haka designed specifically for the All Blacks, was introduced and the cultural adviser who taught the squad this haka stated that the players should stand still at the end, rather than jump. But why was this introduced after over 100 years of the perfectly good ‘Ka Mate’?

One of the most exciting parts of the haka in recent years has been the opposition’s response to the challenge laid down by the All Blacks. From the French’s arrowhead challenge in the 2011 World Cup final to Owen Farrell’s smirk for England in last year’s semi-final, the crowd and players seem to love when the opposing team responds. 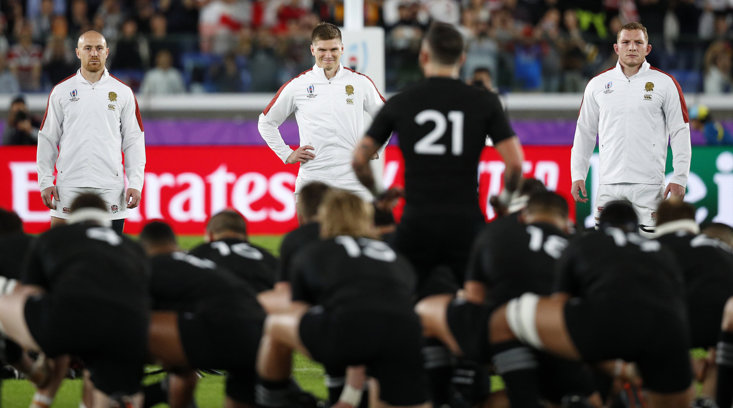 “Any team has any right to do whatever they like in response to the haka. It is a challenge,” adds Wall. “People think it is something purely for the All Blacks. While that is true as the All Blacks get a lot of psychological energy out of it, it traditionally means that I respect you or I honor you. To respond to it, by singing or standing in a line, or advancing on it is any other country's way of answering the challenge by putting down a challenge of their own. The All Blacks love it, they embrace the challenge that the other teams want to bring and the crowds love it too.”

From uncoordinated and unwanted dance to one of the greatest spectacles in the sporting world, the haka has come a long way in 35 years, and Buck Shelford is the man who made it happen. When asked what Buck means to the people of New Zealand, Wall laughs. “Ah mate, how long have you got?

“When you say that all countries, all sports, have a people’s champion, well Buck Shelford was our people's champion. He typifies what rugby meant to New Zealand society back then and what it still does. He is an absolute legend.”

Thank you Wayne ‘Buck’ Shelford, the man who saved the haka.

x
Suggested Searches:
Manchester United
Liverpool
Manchester City
Marcus Rashford
Premier League
More
sports
Serena Turns 40: The Sporting Legends Who Turned Back Time To...
Sport has always been a young person’s game. For years we have been blown away by the talents [ ... ]
football
Aaron Ramsdale Has Proved He Is Arsenal's Number One Despite...
Aaron Ramsdale’s arrival at Arsenal was far from positive. For most fans, it seemed silly to spend [ ... ]
horse-racing
The Day Frankie Dettori's Magnificent 7 Cost Betfred £3.5 Million
“I wrote a full chequebook of 50 cheques the next day, the smallest win was £10,000, the [ ... ]
football
Sol Campbell, An Empty Press Room And The Greatest Secret In...
The number 23 shirt was primed and ready. The move that would see goalkeeper Richard Wright join Arsenal [ ... ]
boxing
Fever Pitch: Boxing’s Greatest Football Stadium Superfights
Anthony Joshua and Oleksandr Usyk face off this Saturday for three-quarters of the heavyweight championship [ ... ]
motorsport
Can Sochi Specialist Valtteri Bottas Win Mercedes The Constructors'...
There’s not going to be much at all to split Max Verstappen and Lewis Hamilton for the Drivers’ [ ... ]
sports
Good Friends, Better Enemies: Five Sets Of Teammates Who Hated...
United States teammates Bryson DeChambeau and Brooks Koepka are reportedly looking to squash their long-standing [ ... ]
football
Robbie Fowler By Numbers: From L8 to Liverpool Legend
A ferocious storm straight from the heavens hit west London on Wednesday 22 September 1993. Craven Cottage [ ... ]
football
What Will Cost Your Team The Premier League Title?
Just five weeks in, the Premier League table has already taken shape largely as expected. The four teams [ ... ]
football
''I Believe In Fairies'' - The Life And Times Of The Irrepressible...
Brian Clough wasn’t just one of the most quotable managers in English football’s long history, [ ... ]
football
Remembering Saint & Greavsie: Legends In Their Own Lunchtime
Today we sadly lost one of England's greatest ever players. World Cup winner Jimmy Greaves is still [ ... ]
boxing
Ken Norton, The Former US Marine Who Used A Self-Help Book To...
Not a soul in attendance, even in his adopted hometown, believed Ken Norton had a chance of beating [ ... ]
football
Matip, Gomez Or Konate: Who Is Virgil Van Dijk's Perfect Partner...
We saw the very worst of Liverpool’s central defenders last season as an injury crisis stripped [ ... ]
football
Fantasy Premier League Gameweek 5: How To Balance Ronaldo And...
We are straight into another FPL gameweek and if you have managed to make it this far without playing [ ... ]
football
David Moyes' European Expeditions: What Do West Ham Have In...
This will be David Moyes’ sixth European campaign, as the experienced Premier League manager embarks [ ... ]
boxing
Ali’s Last Great Night: When The Greatest Turned Back The Clock...
Muhammad Ali made a career out of proving people wrong. His artistry in overcoming adversity inside [ ... ]
football
Mendy's Epic Journey: From The Dole Queue To The Champions League...
It’s July 2014 and Edouard Mendy has nothing going for him. He’s just suffered back-to-back [ ... ]
tennis
Richardson, Henman And Wade: The Stars Behind Emma Raducanu's...
Emma Raducanu’s US Open win will go down as one of the best sporting achievements of the century, [ ... ]
football
Chelsea vs Zenit: Andre Villas-Boas Is The Forgotten Manager...
When Chelsea meet Zenit Saint-Petersburg in tonight’s Champions League encounter, both sides know [ ... ]
football
Can Young Boys Boss David Wagner Be Manchester United's Kryptonite...
On a rainy night in Yorkshire, David Wagner savoured one of his greatest managerial moments. His Huddersfield [ ... ]
football
VAR Is The Future But Full-Time Referees The Priority In Women's...
The officiating in the Women’s Super League was once again called into question this weekend as [ ... ]
tennis
US Open Champion Emma Raducanu Is The Talismanic Modern British...
Emma Raducanu’s US Open win was historic. The 18-year-old became Great Britain’s first female [ ... ]
football
The Mark Viduka Game: When Leeds United Beat Liverpool 4-3 In...
Everybody loves Leeds United these days. Their carefree style, their bucket-loving manager, their attractiveness [ ... ]
tennis
Emma Raducanu Following In The Footsteps Of The Great Virginia...
It’s been 44 years since Great Britain had a female Grand Slam champion, but US Open wildcard [ ... ]
football
Fantasy Premier League Tips Gameweek 4: How To Recover From...
We are back! After a weekend off that saw England and Wales drop points in their bid to reach the Qatar [ ... ]
tennis
Why Novak Djokovic Is Three Games Away From Male Tennis History...
Only five people in history have ever won a Calendar Slam. That’s the Australian Open, French [ ... ]
football
Vienna Waits For Scotland As World Cup Hopes Hang In The Balance
“But you know that when the truth is told, that you can get what you want or you can just get [ ... ]
football
Wales, Golf, Madrid: Have Gareth Bale's Priorities Changed In...
Wales. Golf. Madrid. In that order. The banner that Gareth Bale proudly displayed after his country [ ... ]
golf
Patrick Cantlay's Journey From Personal Tragedy To FedExCup...
“You don’t know how you’re going to react in that situation,”  Patrick [ ... ]
football
Man Utd's Attacking Depth Is Set To Make Jesse Lingard England's...
Under normal circumstances, an attacking midfielder who had just scored twice for England in front of [ ... ]