It culminated under the floodlights in Las Vegas, Nevada... Of course it had to happen in the 'Entertainment Capital of the World'.

At the Shadow Creek Golf Course, two goliathan golfers had faced off: Phil Mickelson, worth an approximate $400m. In the opposite corner, Tiger Woods, valued at almost double Lefty’s at $800m.

That’s $1.2bn worth of golfer sharing the stage in the most ludicrous event the game of golf has probably ever seen. A single prize pot of $9m - in cash - ready to be handed over to the victor.

It was a duel that drew both delight and derision in equal measure: the brainchild of a Hollywood agent and a film and TV producer, requiring ‘eagle-eyed’ enthusiasts to part with $19.99 to witness the experience that promised to be of Hamilton/ Burr, Ali/ Frazier proportions. It even had The Samuel L Jackson in the role of tee announcer at the start of the match.

With all the ingredients, especially the most televisual of tee-off titans in Mickelson and Woods, the event simply needed to be referred to as ‘The Match’.

However it was sensible to approach with caution. A promotional video that had shown the two rivals engaging in a golfing-take on the college institutionalised  ‘beer pong’ was filled with all the sensuous promise of a tour around a sewage treatment plant. Former world number one Rory McIlroy stated Woods versus Mickelson might have been valid 15 years ago. Denis Pugh, coach of the Open champion, Francesco Molinari, and a successful TV analyst, branded the tie a ‘hyped-up sideshow’. Eddie Pepperell branded it ‘putrid’ and ‘pathetic’. Then-world number four Justin Thomas, an American Ryder Cup team-mate of Woods and Mickelson, had said there was a ‘zero per cent chance’ he would order the match. 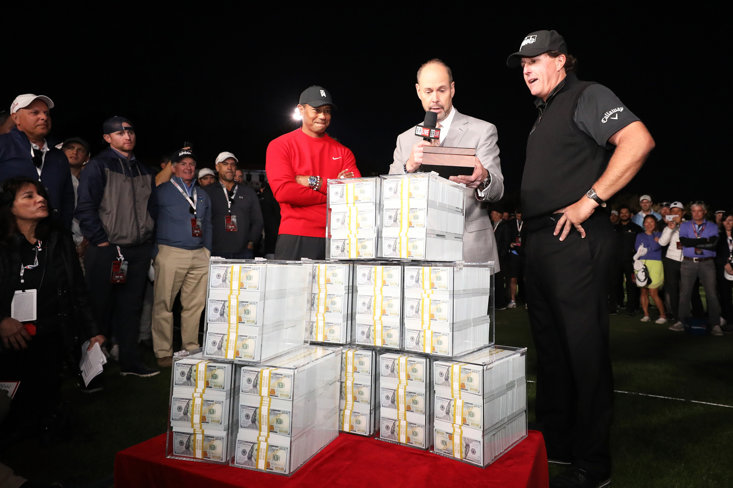 It didn’t matter. The humongous prize fund initially stood at $10m before being reduced on appeal by the PGA Tour, stumped up with the fee paid by the Turner Broadcasting Service, but was still more than enough to attract record-breaking numbers, with close to six million Americans tuning in (including, it must be noted, Justin Thomas!) for the largest golf audience ever on cable.

It was designed in the manner of past ‘Battle’ showcases, but with the addition of clip-on mics on the two sport stars in order to hopefully catch the trash-talk. For the Twitter generation the event's promotional hashtag - #TheMatch - quickly began trending worldwide, the competitive nature of The Match was made inclusive to the watching national audience, with betting odds being displayed on the screen to tempt viewers into wagering, with real-time, hole-by-hole statistics, displaying the probability of different outcomes, to help the audience’s decisions of where to put more of their hard-earned money.

But how had we gotten here? The concept for The Match had begun with a hypothetical question between two Hollywood friends, the Creative Artist Agency’s Jack Whigham, and one of his clients, Bryan Zuriff, a big-shot producer and golf enthusiast.

“[Zuriff] called and asked me, How crazy is this?” Whigham recalled to Golf Digest, “I said, ‘Probably too crazy.’

“Basically, we started thinking, wouldn’t it be cool if there were a golf match that was played the way a lot of us play with our buddies on the weekends? You know, where you bet on everything and talk smack and basically have this continually running dialogue of, pardon the expression, giving each other sh*t.

“One of the fun things about working in Hollywood is the amount of times we say to ourselves, ‘Well, crap, why can’t we do something like this?’ Bryan called me, and we began spit-balling about this idea. And this thing fell apart a few times before we were able to put the pieces together.”

Their earnest brainstorm eventually led to two of the greatest golfers of all time with a then-19 majors between them, teeing off on 23 November 2018, the Friday after Thanksgiving, at midday. 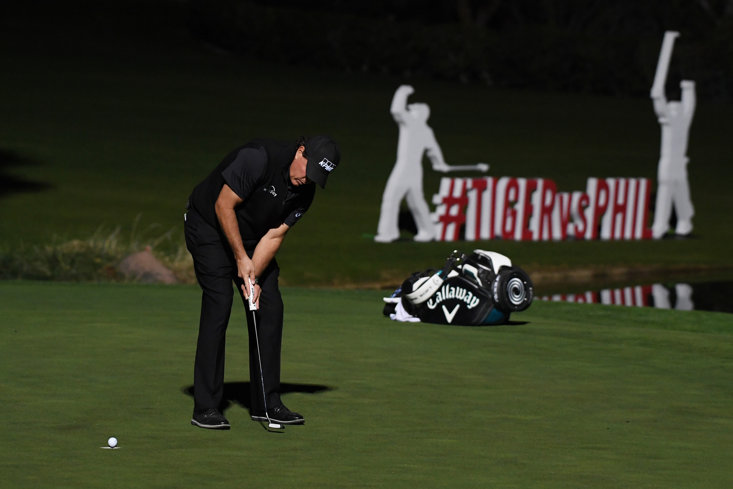 Woods and Mickelson challenged each other with charity side bets throughout a match which ran up until the 22nd hole. The jovial betting had started at a preliminary news conference when they bet $200,000 on Mickelson opening with a birdie on the par-four first. The five-time major champion missed his chance and that meant Woods won the challenge, with that money going to his chosen charity. Mickelson ultimately won three of four side bets by the event’s close, bringing in $600,000 for three closest-to-the-pin wagers.

"It was competitive but at the end of the day we're going to help a lot of people out," Woods said at the time.

Woods had chipped in on the 17th to stop Mickelson putting for the match, then missed a chance himself from eight feet on the first extra hole, leading to a sudden-death play-off on a 93-yard hole. On 22, Mickelson sank a four-foot putt for victory.

"I'm just trying to calm down, my heart can't take any more, it was such an incredible opportunity," Mickelson would say in the aftermath.

"[Tiger is] the greatest of all time but to have a little bit of smack talk for the coming years means a lot to me because I don't have a lot on him!"

Golf may have temporarily grimaced at this spectacle in the City of Sin, but Hollywood had once again turned out a bonafide blockbuster.