Wayne Rooney’s right foot was explosive, like a traction engine as Alan Partridge would put it, and his left was exquisite too. Boasting unbelievable technique he could shoot on sight, but the weapons he chose for his feet played a big part in his goal scoring prowess too.

First donning a pair of Umbro as he starred for Everton while still of school age, he soon became one of Nike’s leading faces, with the Swoosh swiftly signing him up back in 2003. Watching him live and seeing him in full-flight was a dream. Young Wayne bulldozed the opposition with his pace and power, frightening them into submission with his dazzling ability, vision and direct galloping towards goal.

After leaving Goodison Park in 2004, it came as no surprise when he wrote his name into the Manchester United and England history books. To mark the five-year anniversary of the day he became England’s all-time top goalscorer (we know, time flies!), here’s a look back at his glittering career through the boots he wore... 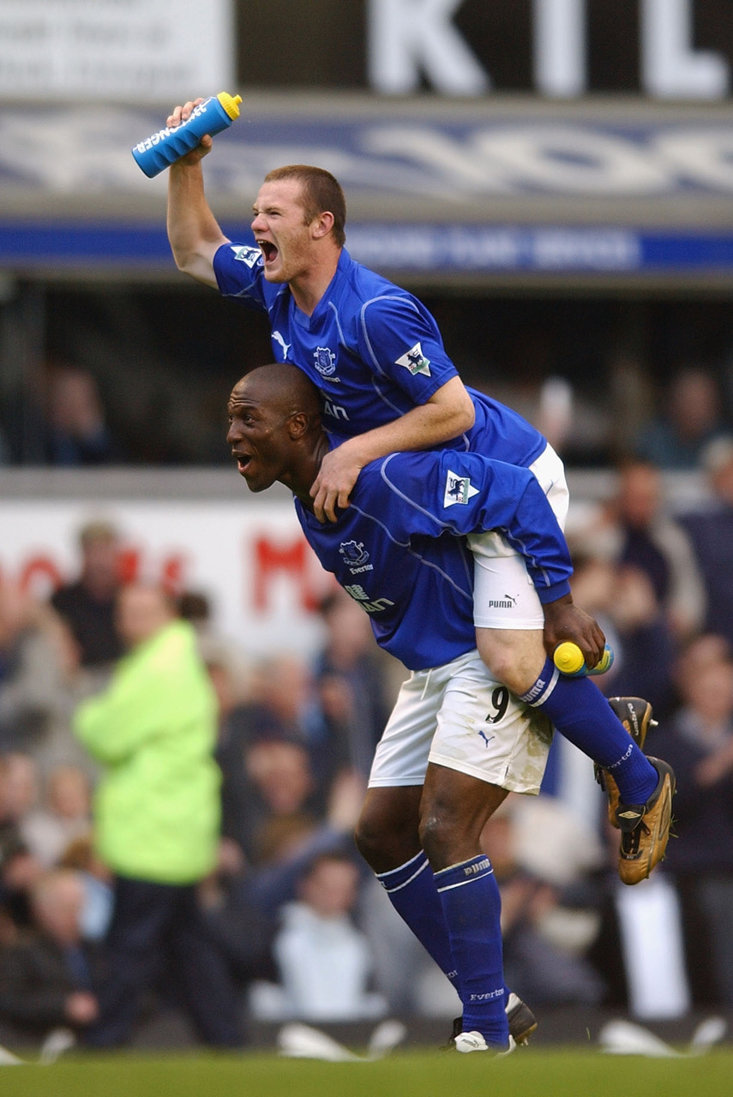 Wayne Rooney was still only 16 when he announced his arrival with a stunning strike for boyhood club Everton to end Arsenal’s 30-game unbeaten run in October 2002.

They say you have to be brilliant or brave to wear gold boots but young Wayne was exactly both as he plucked the ball from the air with cool ease, before setting himself with a deft touch and curling an unstoppable effort past Gunners goalkeeper David Seaman.

I was there, lucky enough to see this rampaging Evertonian saviour running straight towards my seat as he triumphantly took in the adulation from 40,000 of his new enthralled fans. As he raced away towards me, punching the air, the television cameras for those watching at home, literally shook under the cacophony of noise and celebration at the historic Goodison Park.

This kid was mobbed by seasoned pros like David Unsworth, David Weir and Kevin Campbell, completely bowled over by what they had just witnessed but not surprised having seen him boss it in training.

Eighteen years on, I still get shivers when I remember seeing the ball fly through the air and Rooney’s reaction, the excitement and adrenaline pumping through his veins as he legged it across to the supporters. It was a moment nobody there that day will ever forget.

Superstardom beckoned for the Croxteth-born striker as Clive Tyldesley bellowed, “Remember the name, Wayne Rooney!” Nobody was going to forget him. 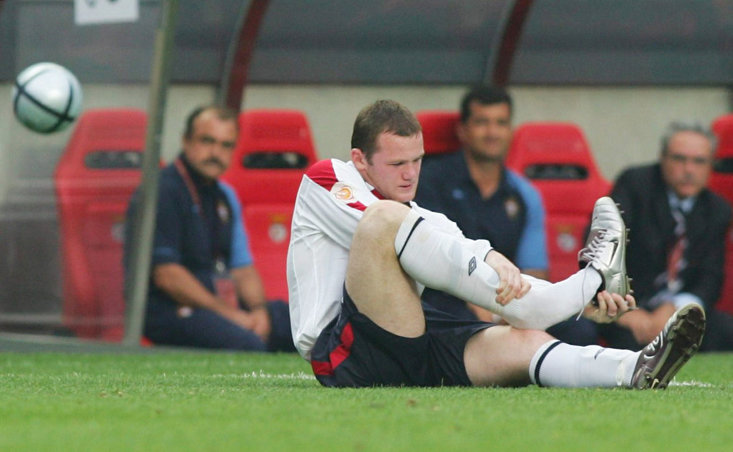 It was at Euro 2004 where Rooney marked his standing as a wonderkid on the world stage. With the Three Lions on his chest, he scored braces against Switzerland and Croatia; though one cannoned off the post and struck the Swiss keeper on the back of the head before hitting the net, he’s still credited with the goal and who are we to argue?!

Rooney wore the Nike Air Zoom T90 III out in France and Portugal were clearly petrified as they lined up against Sven Goran-Eriksson’s men in Lisbon.

Back home, a nation’s dream pushed Rooney on until disaster struck as he broke his metatarsal – the forward clutching his maroon and white boot still so clear.

Little did we know his maiden tournament would be his last truly brilliant one for England. Soon though, he would earn a move to Manchester United and score a simply stunning hat-trick on his Champions League debut against Fenerbahce. Still wearing T90 but of course, the gold edition. Ahh, memories. Golden memories. 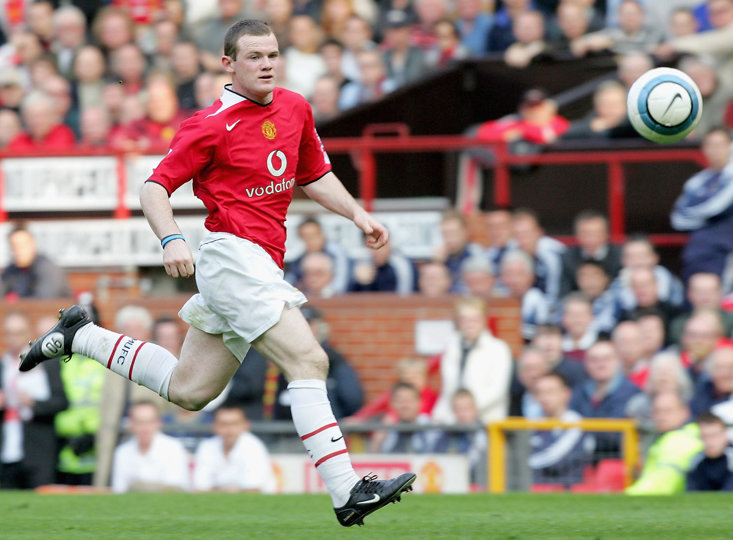 Rooney took it back to basics towards the end of the 2004/05 campaign with plain black T90s but his strike against Newcastle was anything but basic.

With United trailing to the Magpies in a late-season Premier League duel, Rooney was clearly irked at the score line and lambasted the referee mid-game. However, just as he bawled at the poor official, the ball dropped perfectly and suddenly he shot into life. Rooney’s focus now solely back on the game, hurtling forward like a steam train before unleashing an unstoppable volley from 30 yards out past Shay Given. It was an electrifying goal as the ball flew into the top corner.

“It’s not often I’m speechless,” said a bowled-over Andy Gray. The Old Trafford faithful had come to expect such searing talent from Rooney and he was still only 19. 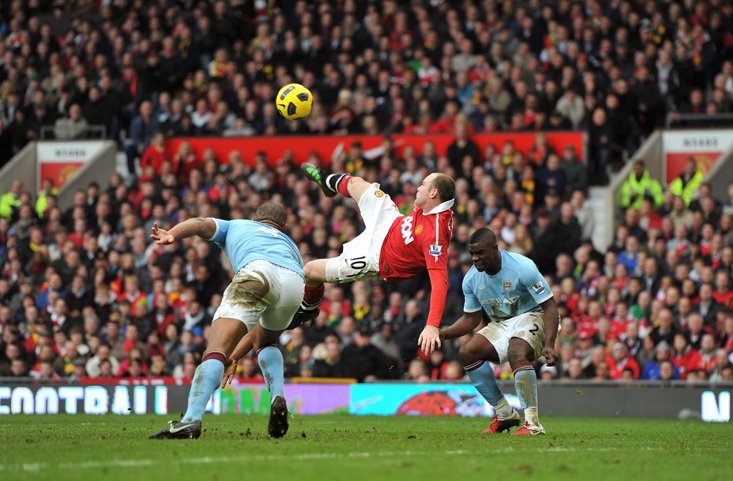 To score an overhead kick like this takes enormous skill and intelligence and is deserving of any stage. However, to score a goal of such magnitude, against your fierce local rivals just takes the majestic finish to a whole other level.

Wearing the black and green T90 Laser III, Rooney had laser-like precision to arrow the ball past a helpless Joe Hart in the Manchester City net. The 75,000 spectators present that day, and even the millions glued to their screens across the world, will never forget the astonishment such a strike produced. It was out of this world.

This win, back in February 2011, helped Rooney towards the fourth of his five Premier League titles. 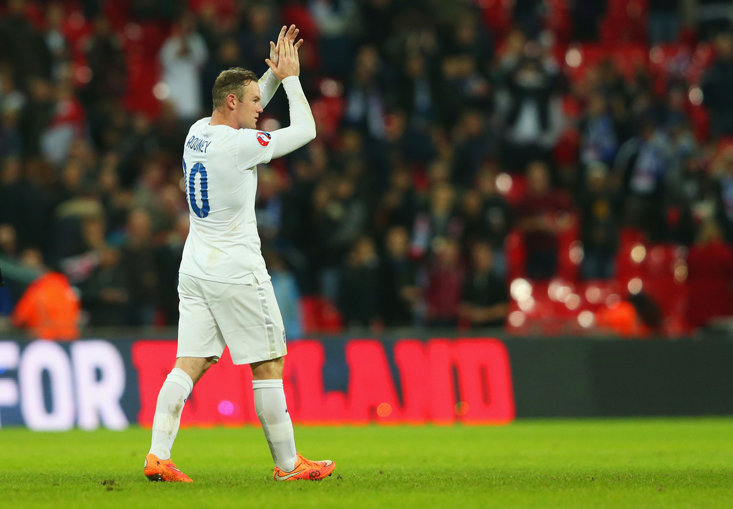 Earning his 100th England cap in November 2014, Rooney wore a special pair of commemorative boots to proudly mark his milestone match at Wembley.

Taking on Slovenia, of course, he scored in the bright orange Nike Hypervenoms which featured ‘100’ printed on the side and an inscription of his initials. Inspiring stuff.

The Manchester United star, now a legend for both club and country, was in good company in the Hypervenoms with Neymar, Robert Lewandowski and Pierre-Emerick Aubameyang all fellow wearers of the boot. 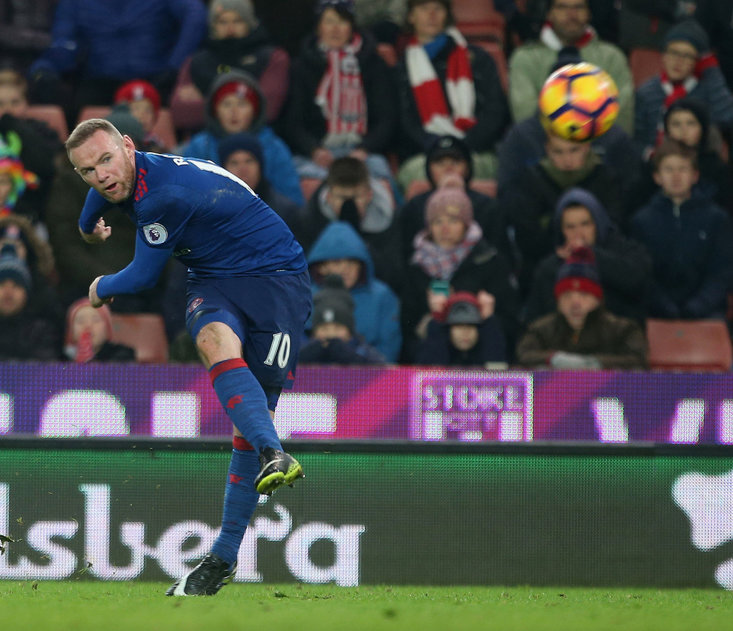 As Rooney entered the Autumn of his career and more landmarks were being reached, it all became about marking the occasion as Nike produced a special, limited edition pair of Hypervenom II WR250s in January 2017.

After netting a ridiculous free-kick against Stoke on January 21, 2017 – the ball somehow bending up and down before cruising into the net - Rooney wore the unique red and white boots before the curtain came down on his career at Old Trafford.

A return to Everton followed before a switch Stateside to DC United and throughout, he still had his shooting boots, sometimes even donning vintage pairs, with Rooney the Toffees’ top scorer in with ten strikes in 2017/18, while finding the net 23 times in the MLS.