Football
Features
The Piano Man is an unexpected voice of reason as Scotland take on Austria in World Cup qualifier
Simon Lillicrap
12:00, 07 Sep 2021

“But you know that when the truth is told, that you can get what you want or you can just get old...”

Scotland would be wise to heed the advice of Billy Joel as they prepare for their seismic World Cup qualifying clash against Austria tonight which, given the current standings of their group, carries huge importance for the qualification hopes.

Steve Clarke’s side lie third on eight points, while their hosts sit right behind them on seven, however, there is also a top of the table clash taking place between Denmark (15pts) and Israel (10pts) that will seriously impact their chances of making it to Qatar next November. Although by no means confirmed, it seems as if Denmark will win this group and take the only automatic qualification spot available, so it may actually do Scotland a favour if they beat rivals Israel tonight, as Clarke’s men target a play-off spot.

Having appeared at their first European Championship in 25 years this summer, the Scots are now looking to end a 24 year wait for a World Cup appearance and would surely fancy their chances heading into another play-off round. Against the odds they came through a semi-final on penalties against group rivals Israel, before beating Serbia by the same method in the final to secure a spot at Euro 2020, and that belief, and the fact that this group of players ended such a long draught will stand them in good stead.

“You’ve got your passion, you got your pride, but don't you know that only fools are satisfied? Dream on, but don't imagine they'll all come true…”

Clearly The Piano Man hit the nail on the head for this current group of Scotland players. They should be delighted that they reached Euro 2020, but satisfied? No way. However, there needs to be a dose of reality that comes with this World Cup dream.

For the extended European Championship, 24 teams qualified, including the likes of North Macedonia, Slovakia and Turkey that flopped on the big stage. For this World Cup, just 13 European teams will qualify. You can see the uphill battle Clarke’s men face. 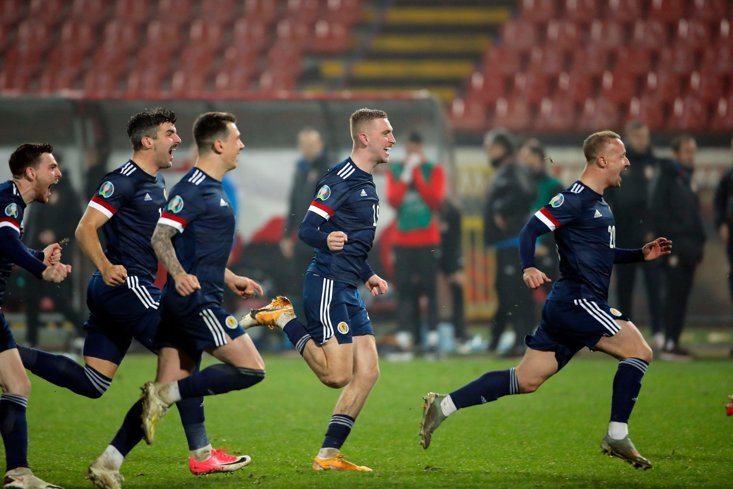 Ten group winners will automatically qualify, which barring a remarkable set of results looks to be Denmark in Group F, and then the runners-up, along with the two strongest Nations League sides who didn’t qualify, will contest three four-team mini-competitions to give us the other three qualifiers. If they can make it into the top two, it will be a fantastic achievement, but there's even a slight chance they could overhaul Denmark - with both the Danes and Israel still having to travel to Hampden Park in the next few rounds of fixtures.

Clarke faces a tricky follow-up to the Euro success and has bemoaned the chaotic international football schedule that has seen his squad struggle with Covid issues and injury problems this week, but these sorts of issues could bring a sense of togetherness for the side, and the fringe players will be desperate to impress and nail down a first team spot.

They’ll be without Nathan Patterson, Ryan Fraser and Kenny McLean for tonight’s crucial fixture given the aforementioned issues, but Scotland must dig in to secure at least a point. A win is likely to take them into second place, a draw will keep them alive in this qualification group, while a defeat will see Austria leapfrog them, and all but end their chances of making it to Qatar.

Clarke and the entire country realise that it is now or never for Scotland’s qualification hopes. And so did the legendary Billy Joel…

“When will you realise, Vienna waits for you.”