Motorsport
Features
The electrically-powered SUVs will race in five different areas, from the Amazon to the Himalayas
Jack Porter
06:55, 20 Nov 2019

While the 2019 Formula One season might be drawing to a close, a whole new brand of racing is beginning to whet the appetite of the world.

Extreme E racing will see electrically-powered SUVs compete in some of the most remote corners of the planet.

The racing series is set to take place five jaw-dropping categories: Extreme E Arctic, Glacier, Rainforest, Desert and Ocean. This means venturing onto the Arctic ice, heading into the Sahara, and racing in a specialised area of the Amazon rainforest.

Nepal’s Mustang District in the Himalayas mountain range, 2,750m above sea level is the latest location to be revealed, the fourth on the circuit. There is just one place left to be disclosed.

“This is a hugely exciting project," explains Gil de Ferran, the chairman of Extreme E.

"Extreme E offers a unique sport, adventure and entertainment concept that has never been seen or done before.

"Viewers can expect a completely new way of consuming sport, with each episode telling not just the story of a race, but the wider race of awareness and the need to protect these remote and challenging environments being explored by Extreme E.”

All-electric vehicles will be utilised, designed to help elucidate the devastation of air pollution. Businessman Ajejandro Agag, who once monopolised F1 rights in his native Spain, is the founder and chairman, alongside former Indianapolis 500 winner de Ferran. The sport is orchestrated to expose the plight the world’s ecosystems face as a result of climate change.

"We are confident that hosting this international series will serve to further our global appeal whilst being able to also shine an important spotlight on the climate issues which face our region and their solutions,”  Agag has stated.

A new 500bph, all-electric racer which will be deployed in the series was unveiled at Goodwood earlier this year. It is capable of hitting 100km/h (62mph) in 4.5 seconds, with the ability to face gradients of up to 130 per cent. In line with the eco-friendly onus integral to this revolutionary project, vehicles will be shipped around the world on what is being dubbed ‘the floating garage’. 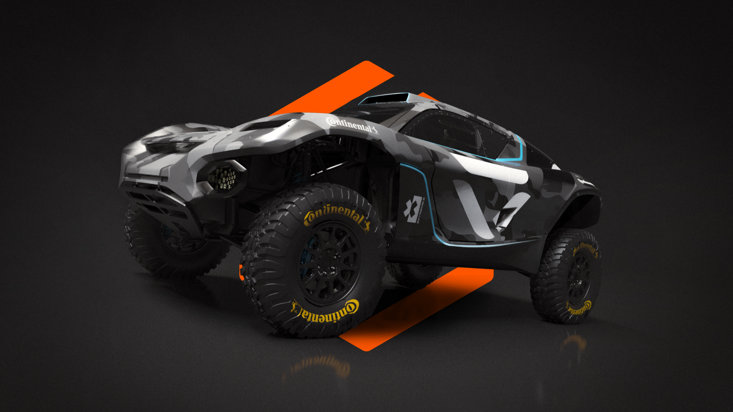 One of the familiar faces in line to take part in competition is Britain’s Billy Monger. In April 2017, mere weeks before his 19th birthday, the prodigious ‘Billy Whizz’ had to have a double-leg amputation, one above the knee and one below, after a high-speed crash in a Formula Four Championship race at Donington Park.

Monger is a recipient of a Pride of Sport prize, and was handed the BBC Sports Personality of the Year Helen Rollason Award following his remarkable recovery and display of resilience. Now 20 years old, Monger is still aiming to compete in FIA Formula 3 for the 2020 season but will now also hopefully take centre-stage in Extreme E.

"Fighting climate change is incredibly important," Monger told the BBC. “Everything we do now will affect future generations. It's definitely a responsibility, and one that I can't and won't just ignore." 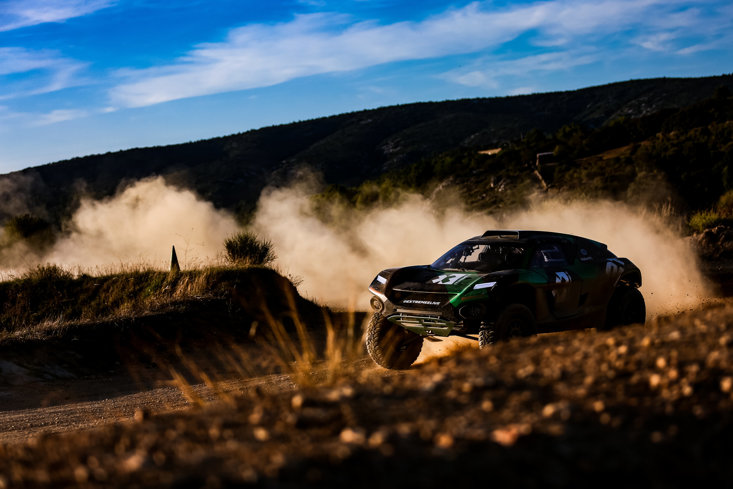 Monger, who has gained the praise from such luminaries as Lewis Hamilton and Jenson Button, re-entered the competitive world of racing earlier this year in a specially-adapted vehicle for the Euroformula series.

It is another positive story to emerge from a racing series designed not only to replicate the thrills and spills of motorsport but also to inspire others, and to have a radical effect of our ever-changing environment.

Are you all set for the Electric Odyssey?

Extreme E
@ExtremeELive
The adventure begins! Here is the Extreme E car! ⚡️#Racefortheplanet #ExtremeE
95
291
More
boxing
Mia St. John - The Boxing World Champion Using Her Power For...
Mia St. John had a purpose in life. It was, in her own words, “to kick somebody’s ass”. [ ... ]
football
From The Ox To Dele Alli, Meet The Photographer Trusted By Football's...
Matt Gordon enjoys PlayStation with Liverpool’s Trent Alexander-Arnold, holidays with rising football [ ... ]
football
Robbie Fowler By Numbers: From L8 to Liverpool Legend
A ferocious storm straight from the heavens hit west London on Wednesday 22 September 1993. Craven Cottage [ ... ]
football
The Crazy, Continent-Crossing, Love Affair...Welcome To The...
5,031 miles. That's the exact distance that separates Aston in Birmingham from the Ghanain village [ ... ]
sports
From Kelly Slater To Serena Williams, The Athletes Stepping...
“We are facing a man-made disaster on a global scale.” Not our words but those of Sir David [ ... ]
football
Fenerbahce's Light Out Of The Dark: When Turkish Women Ruled...
Hearing the cry of ‘Women and children first!’ could understandably take you to that freezing [ ... ]
boxing
Finding Mike - All The Details So Far On Jamie Foxx's Tyson...
Mike Tyson is one of the most explosive and enigmatic sportsmen of all-time. His life has been one of [ ... ]
football
A Wonder Of The Footballing World: Celebrating The San Siro
The position as a modern-day Antipater would be unenviable if one was tasked with nailing down the Seven [ ... ]
boxing
Ken Norton, The Former US Marine Who Used A Self-Help Book To...
Not a soul in attendance, even in his adopted hometown, believed Ken Norton had a chance of beating [ ... ]
football
11 Points And Down In March: Derby County's Nightmare Premier...
It is the 39th minute at Pride Park in front of a roaring 33,000 strong crowd, the majority of whom [ ... ]
motorsport
184MPH On A Push Bike... Meet The Fastest Cyclist In The World
The scorching Bonneville Salt Flats of Utah. As far as the eye can see, the view is only a two-tone [ ... ]
football
Thanks Gaffer - The 19th Century Moniker Modern Footballers...
If you watched ‘The English Game’ on Netflix recently, the countless differences between [ ... ]
football
We’ll Raise Your 27-0 And Give You 31-0, The Biggest Hammerings...
Winning provides happiness. Losing provides wisdom. In football, it takes two sides to create history, [ ... ]
football
Joaquin, We Salute You - Real Betis Royalty Who’s Reigned For...
Eight years. That’s the average length of a professional footballer’s career. Average. Joaquin [ ... ]
football
From The Work Of Art To The Throwback, The Season's Best New...
Leeds United were the first. That’s right, the Elland Road club who are back in the Premier League [ ... ]
tennis
From Stockport Rebel To Hollywood Favourite, How Fred Perry...
“I’m a great believer in trying to look the part. It’s a fetish with me.” For [ ... ]
football
Germany Vs Bayern? Brazil Vs Exeter? These Are The Best Club...
The club versus country row has increased this century, with the soaring popularity of the Premier League [ ... ]
football
Bill Shankly - The Teenage Miner, Midfield Star And Managerial...
Bill Shankly wasn’t only a great football manager, you know. He was one hell of a player too. [ ... ]
tennis
Why John McEnroe Epitomises The Best In Tennis And How It Can...
It’s nearing the end of the long, hot summer. The year is 1984. You’ve got your Member’s [ ... ]
football
Toffees, Trophies And T90s: Rooney’s Football Journey Through...
Wayne Rooney’s right foot was explosive, like a traction engine as Alan Partridge would put it, [ ... ]
tennis
Remembering Little Mo, The Grand Slam Winning 'Killer In Pigtails'
No other player has arguably had such a profound effect on tennis, in such a tragically short space [ ... ]
cricket
It Pays To Be Patient: The Sportsman’s Ode To 140 Years Of Test...
Can you imagine trying to sell Test cricket to the public in 2020, if it was a new invention? Given [ ... ]
boxing
First Glimpse Of Greatness: When Ali Fought Fear With A Parachute...
As he sat there on bended knees in the middle of the aisle, the beads of sweat rolling down his forehead [ ... ]
boxing
The Newport Rocky: The Best British Boxer You’ve Never Heard...
Before David Haye and Tony Bellew, there was David ‘Bomber’ Pearce. A British cruiserweight [ ... ]
us-sports
Vince Lombardi: NFL Legend, Pursuer Of Perfection, Champion...
His name adorns American football’s ultimate prize thanks to his outstanding record as a coach [ ... ]
tennis
Serena Williams Doesn't Need The Grand Slam Record - She's Already...
There is no benefit in asking when it will end, just be glad that it’s happened. And still happening. [ ... ]
football
The Most Successful 'Failure' Ever? Reflecting On Bale's Time...
You’re worth £90million. At home - or rather in your stunning, sunny Spanish villa, hundreds [ ... ]
boxing
Rocky Marciano - The Epitome Of The American Dream And An Age...
With the Great Depression and Second World War firmly in its rear-view mirror, the 1950s saw the United [ ... ]
boxing
Groves, Ali And A Life Inside Boxing: The Sportsman Interviews...
Irish boxing coach Paddy Fitzpatrick is the man you want in your corner. And not just in the ring. He’s [ ... ]
boxing
The Contender: The Reality TV Show With Stallone That Promised...
As the world entered the new Millennium, the sport of boxing and the world of reality TV were at polar [ ... ]