As he made his way to the ring at the centre of Louisville’s Freedom Hall on 29 October 1960, on a run of six straight defeats, there was little to suggest to Tunney Hunsaker that he was unwittingly participating in one of the most momentous nights in boxing’s long and storied history. Stood directly opposite to the man who was also a police chief, shuffling, dancing and boasting to anyone within earshot, was an 18-year-old newcomer on the heavyweight scene, a man who’d only a month prior captured light-heavyweight gold in Rome, and brought it home to Kentucky.

His name was Cassius Clay and he was making his professional debut.

Sure, Clay, later Muhammad Ali, was a star in the making, that had been evident long before he had even laced up a pair of gloves in the paid ranks, but not one of the 6,180 spectators in attendance that night could have predicted what was to come for the young prizefighter. Not least of all the man himself. Clay was wracked with nerves in the lead-up to his debut with Hunsaker, a preposterous notion when compared to the man who would dance around one of the most fearsome fighters on the planet four years later, Sonny Liston. 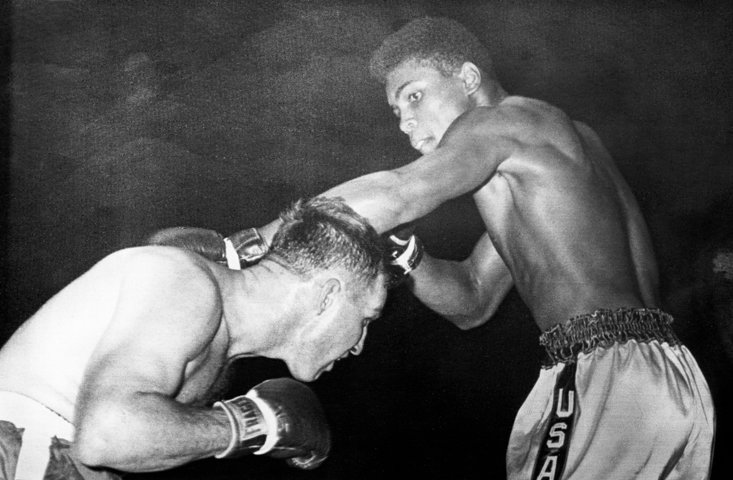 CLAY AND HUNSAKER IN ACTION IN THE FORMER'S PRO DEBUT

But this was all-new territory for Clay, who had yet to appoint his faithful long-time trainer Angelo Dundee and was without a manager. For fight numero uno he would have to learn on the job, and that he did with aplomb. "He's awfully good for an 18-year-old and as fast as a middleweight,” a bloodied Hunsaker told the press in the aftermath.

"Clay was as fast as lightning ... I tried every trick I knew to throw him off balance but he was just too good."

Clay won every single round of the scheduled six (although Hunsaker would always dispute this, adamant he won the first and last stanzas) and although no one in attendance was treated to a particular classic - The Rumble in the Jungle it was not - Clay’s star quality was undeniable as he tore Hunsaker to pieces. By the time the bell had hummed for a final time to signal the end of the fight, Hunsaker’s eye had almost shut entirely, his nose had been splattered and Clay’s white shorts had been turned into a Jackson Pollock painting thanks to his opponent’s blood. He went the distance though, something which Clay’s next five opponents wouldn’t be able to say.

Hunsaker wasn’t the most naturally blessed fighter Clay would face throughout his career but the respect he had for his first opponent was genuine, remarking in his autobiography that Hunsaker had dealt him one of the worst body blows of his career.

Impressively, Clay looked like he could do it all over again, having barely drawn a bead of sweat. Heck, throw in the rest of the police force. "I'm ready to go 10 rounds anytime," he said after his first win, which bagged him a cool $2,000 to Hunsaker’s $300. "The extra weight slowed me down just a little bit, not enough to hurt." 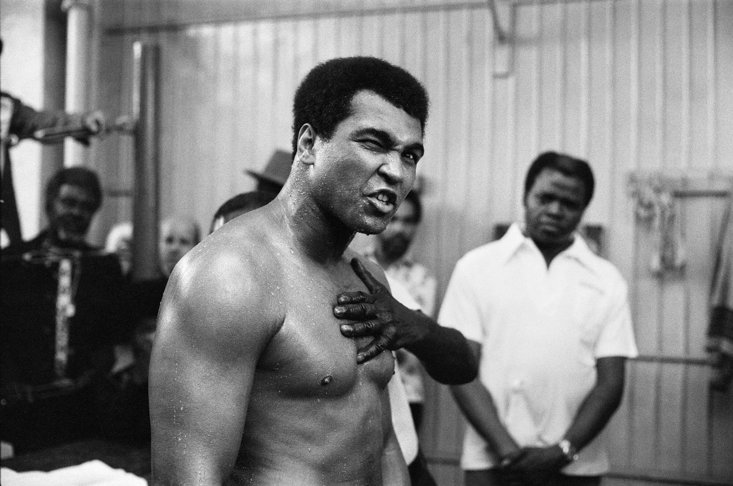 ALI WOULD BECOME THE MOST RECOGNISABLE SPORTSPERSON ON EARTH

After that autumn night 60 years ago, the two men went in entirely different directions. Clay changed his name to Muhammad Ali and over the decades would transcend sport to become the most famous athlete of all-time, while Hunsaker kept fighting, picking up small pay cheques, until an ill-fated fight with Joe ‘Shotgun’ Sheldon put him in a nine-day coma that required two brain surgeries, and sent him into an early retirement with a 18-15 (8) record.

While Hunsaker didn’t end up in the International Boxing Hall of Fame like his rival 60 years ago, thanks to his 38 years of service as Fayetteville’s police chief, he was inducted into the Law Enforcement Hall of Fame. He reconnected with Clay, now Ali, at an autograph signing in Charleston in 1987 and the two began a strong friendship. Hunsaker, a veteran of the Korean War, never agreed with Ali’s stance on the Vietnam War but would always praise him as a humanitarian and an athlete.

Ali touched the people he met in ways he could never know, changing some of their lives forever. Case in point, Hunsaker. One moment you could be walking to the ring on the back of six straight defeats to pick up $300, the next you could become a part of an important piece of history that people will never forget.

In 1992, Hunsaker retired from the police force and was thrown a retirement party. Unannounced, Ali turned up to join in with the celebrations for his old foe and good friend. Afterwards, Hunsaker took Ali on a tour around Fayetteville, eventually taking the two grizzled warriors to the Fayette Station Bridge. It would later be renamed the Tunney Hunsaker Bridge, an honour that probably wouldn’t have happened had he not played his part in sporting history six decades ago by becoming the first man to come face-to-face with The Greatest.