Football
Features
Author Amy Raphael brought famous fans and their idols together for a good cause
Elliott Bretland
14:50, 30 Sep 2019

Pep Guardiola and Johnny Marr. Two of the coolest men in sport and music, in conversation.

Pep: Will you sign my Johnny Marr vinyl? I’ll have to buy a record player now.

Johnny: It’d be my pleasure. But if that turns up on eBay, Pep, I’ll know it was you. I also wanted to give you one of my plectrums.

Pep: Maybe I’ll put it in my pocket and it’ll bring me luck for the rest of the season. By the way, how many guitars do you own? Millions?

Johnny: Funnily enough, I was going to ask you how many grey cashmere jumpers you own…

Both so used to the limelight and experts at answering questions from the media. However, this time they are both a little star-struck and in awe as they interview each other.

Hugely famous in their own fields, the pair were brought together for the book ‘A Game of Two Halves’ in which famous football fans meet their heroes.

“Johnny Marr was nervous in front of Pep, because he admired him so much and it was so sweet,” laughs author Amy Raphael, the brains behind these fascinating chats, which were compiled as a fundraising project for UNHCR, the UN Refugee Agency. “He was like ‘Oh my God!’”

A huge City supporter, the former Smiths guitarist was ideal for the project and part of a stunning line-up. From comedian John Bishop speaking with Jurgen Klopp, to Ian Wright chatting to Wretch 32, the book is full of funny and frank conversations. No agendas, no stories to sell newspapers, these are real chats.

“What really worked was they were more trusting,” Raphael told The Sportsman about football stars opening up to celebrities, as opposed to journalists.

“Klopp may have talked to me about post-war Germany but I doubt he’d have been as open with me as he was with John Bishop, because you’re taking out of the equation the idea of a journalist putting a spin on a story.

“I sat in on every interview. It was incredibly hard as a journalist to sit there and not say ‘No, I really wanted you to talk about that!’ but there was a flow and you had to remember this was their interview.” 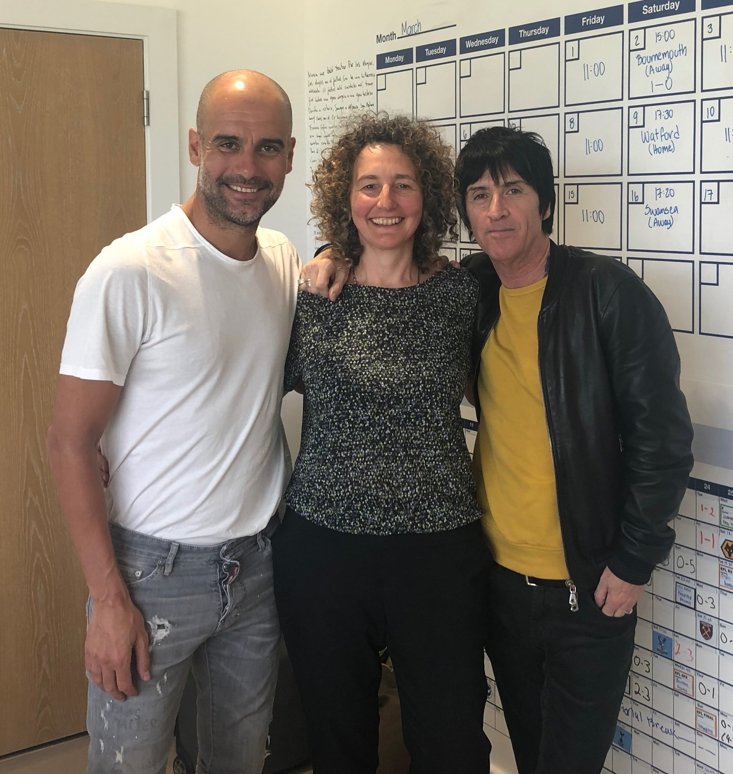 Formerly an editor at Esquire, Raphael now freelances for The Guardian and The Times. She has also published books including the biography of Danny Boyle and she co-wrote Steve Coogan’s memoir.

It was during a holiday in Europe, in the midst of the Brexit referendum, that her next idea came to her. Irked by the vote, while moved by atrocities going on in the world, she had to act.

“I was in Italy when Brexit happened. It felt like a vote to close the borders to me, which I found really shocking. I had also seen some photos in an American newspaper of kids in Syria using a bomb crater to swim in and there I was on holiday with a swimming pool, freedom of movement and these kids were just making the best of a really crap situation. I just thought ‘I can’t stand here and do nothing’.

“Then I saw some kids kicking a football and all of the buildings around them were destroyed. All they were focused on was the football.

“I started thinking about football as the universal language, and thought ‘Wouldn’t it be brilliant if you could get famous football fans to interview their heroes?’

“I spoke to actor David Morrissey, who is an ambassador for UNHCR, to get in touch with various people and he said ‘If you’re going to do this, you’re going to have to see the work UNHCR is doing on the ground’.

“We went to Lebanon, Beirut, and met some Syrian families living in appalling circumstances, one family living in a disused shopping mall. I just needed to see the work they were doing and I was so impressed, especially with the psychological support they were offering.

“We had an early meeting and the UNHCR, loved the idea straight away. I felt it was the right thing to raise money but to keep the conversation going.”

Adept at questioning and probing the famous, she was now chief organiser, tasked with bringing together celebrities with their favourite football stars.

Using her journalistic know-how and perseverance to hunt down the interviews, she managed to secure some huge names early on.

“I managed to persuade Steven Gerrard’s agent to let David Morrissey interview him. They agreed which was so incredibly generous and brilliant. Then it was just perseverance.

“At Esquire back in the 90s, sometimes you would spend a year arguing with Jose Mourinho to get Bobby Robson when Mourinho was translating for him, and it would take a year to get access to someone. It took a year but then I spent three days in Barcelona, watched training, speaking to Bobby Robson.

“I’m used to doing that and once I got Klopp and Guardiola, it was much, much easier. People would look and think ‘Oh you got two of the big hitters, we’re on board.’”

Determined to only include a maximum of two names from each club - she insists she tried to arrange interviews with every side - Raphael managed to land two of Anfield’s biggest legends in Gerrard and Klopp.

A huge Red since childhood, half of her family come from Merseyside. She says:

"Despite my cockney accent, all my family are from Crosby in Liverpool. My granddad was a surgeon in Liverpool and would operate sometimes on footballers - he did Graeme Souness’ knee once.

“He would come back with autographs and one time came back with King Kenny Dalglish. I had King Kenny next to David Essex and David Soul on the wall which is so embarrassing! 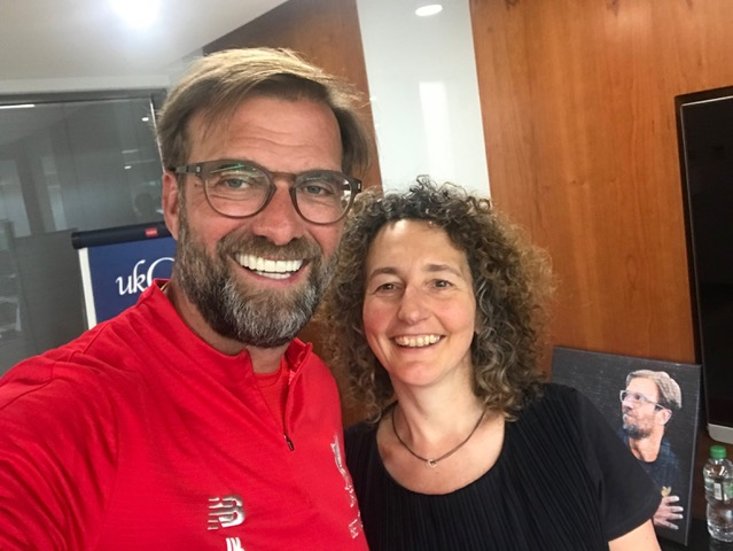 Speaking about her book Amy admits she was genuinely delighted and impressed by the footballers’ passion for the project, particularly Tottenham midfielder Eric Dier during his chat with Labour MP David Lammy.

“I thought David may have wanted to interview Harry Kane because he’s such a star player but I wanted him to speak with Eric Dier,” she revealed.

“Dier is super smart, grew up in Portugal, anti-Brexit. And I never could've expected his first question - ‘What do you think of the minimum wage, David?’

“It was amazing. No disrespect to footballers but he bothered to think about what David wanted to talk about…”

Raheem Sterling, who was seen to have been harshly treated by the media in recent years, provides the foreword for the book, along with Gary Lineker.

He writes openly about being an immigrant, having moved to England from Jamaica aged five, and talks proudly of wearing the Three Lions shirt.

Raphael believes football, and Sterling talking so candidly, can have a positive influence on society.

“I think politics is so divisive and s*** at the moment, and anything, anything, that can bring us together is important.

“Football also exposes the worst parts of society, as Raheem found out, but there will be people who read this and see his perspective.

“During the World Cup, that’s the one time as a nation we are almost all unilaterally behind England.

“We forget our club allegiances and can watch the games together down the pub. Football is unifying, it is a global language.”

A fly on the wall during these fascinating chats, Raphael bore witness to some really special moments.

“Everybody was so generous with their time, Frank Lampard stayed for nearly two hours. I was amazed by how up for it people were.

“Frank was telling Omid Djalili about all of the Chelsea players going to his mother’s funeral. And we were just sitting there in tears, the three of us.

“It was just the openness of players and managers who are normally so controlled being so open, it was amazing.

“As well, Rio Ferdinand guessed that Rachel Riley was pregnant, she hadn’t told anyone,” she reveals, explaining their chat was all about United during what has been a testing time for the Old Trafford club.

“He’s incredibly smart, Rio Ferdinand, emotionally smart and bright and they had this little moment of ‘Oh, you’re pregnant!’ That was really sweet.

“Ian Wright and Wretch 32 just loved each other. It was like one of those Guardian blind dates where they say: ‘Yes, 10 out of 10, we’ll definitely see each other again’. Hector Bellerin and Romesh Ranganathan were a 10 out of 10, too.”

Football stars talking so honestly about subjects that matter to them, for such a great cause? It’s full marks from us, too.