Sunday will be an historic day in the south-eastern Berlin suburb of Köpenick as newly promoted 1. FC Union Berlin play their first-ever Bundesliga fixture.

But the first 15 minutes of the club’s top-flight journey will take place in eerie silence after Union’s hardcore supporters announced that they will remain quiet for the first fifteen minutes in protest at the opposition: RB Leipzig.

“A game against Leipzig is not like any other game,” wrote the Wuhlesyndikat ultras in a statement last week. “For the first Bundesliga match in our history, we were all hoping for a home game and a chance to show the league what football at the Stadion An Der Alten Försterei looks like. We got a home game, but with one problem: the opponents.”

Throughout their years in the lower leagues, Union Berlin have developed a cult status in Germany and abroad for their supporter-friendly approach to football. Three sides of their stadium – the brilliantly named “stadium at the old forester’s house” – is terracing and the club have even frozen season ticket prices despite promotion to the top-flight.

They have a debt to their supporters, who volunteered 144,000 man-hours to help rebuild the stadium in 2008 and even donated money raised from giving blood to save their financially stricken club in 2004 – literally “Bleeding for Union,” as the campaign was called. There are few football clubs in Europe in which the supporters have played such a pivotal role.

Matt Ford
@matt_4d
1. FC Union Berlin promoted to the #Bundesliga for the first ever time.
The first eastern German club in the top flight since Energie Cottbus in 2008-09.
#eisernunion #Relegation2019 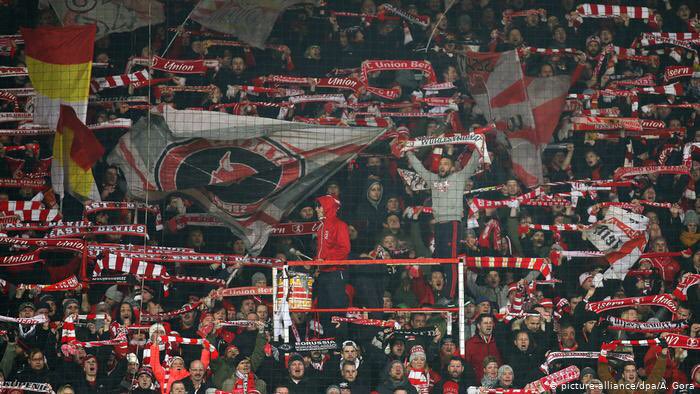 For Union Berlin fans, RB Leipzig, created by Austrian energy drink manufacturer Red Bull in 2009 and boasting a grand total of 17 members, all of whom are employed by Red Bull, represent the antithesis to their idea of football, “a football based on democracy, loyalty, terracing, emotions, financial fair play, tradition, transparency, passion, history, independence and volunteering,” in the words of the Wuhlesyndikat. “The construct from Leipzig tramples all over these values.”

It’s not the first time the two teams have met. When RB Leipzig visited Köpenick in the second division in 2014 and 2015, the Union fans also carried out 15-minute atmosphere boycotts, even distributing black bin bags to create the image of a club in mourning. This time however, there has been criticism of the ultras’ planned protest, including from Union goalkeeper Rafal Gikiewicz, who this week took to social media to address the fans.

“Your planned boycott in the first 15 minutes is not good for us players,” he wrote on Instagram beneath an image of him stood on the stand where the ultras’ capo usually stands with his megaphone. “You could produce a choreography or something else but we players, together with you as fans, need to show our opponents that this is our pitch, our home! They need to know that it’s never easy to play against us.”

The Wuhlesyndikat ultras responded on Wednesday by acknowledging that the timing of the protest on matchday one may not be ideal but criticising what they perceive as the growing normalisation of RB Leipzig in German football.

“RB appears to have become slightly more ‘accepted’ among parts of our support, and even more so among the general public,” they wrote. “Six years ago, this 17-member club was in division three. They were promoted to the Bundesliga in 2006 and finished runners-up a year later. Not through hard work and honest development but by taking over an amateur club and investing huge amounts of money, all for the purpose of advertising. No matter how long this construct exists in German football, games against it can never be normal.”

Since RB Leipzig’s arrival in the Bundesliga, they have been confronted on an almost weekly basis with protests and demonstrations of varying intensity by supporters who feel they stand contrary to the basic values of German football, where the so-called 50+1 rule stipulates that clubs remain ultimately controlled by their members – a rule RB Leipzig have circumvented.

Regular hardcore supporters of Borussia Dortmund, Bayern Munich and FC Cologne are among those who have so far refused to attend away matches in Leipzig while, just last week, the RB team bus was forced to use a different stadium entrance ahead of a first-round cup tie in Osnabrück after home fans blocked the road.

Now, with the arrival of Union Berlin, the first former East German club in the Bundesliga since Energie Cottbus in 2008, the protests show no sign of stopping.

1. FC Union Berlin
@fcunion_en
👉 Ticket details for the match against @BVB at the Stadion An der Alten Försterei and the new process.
#fcunion

3
11
More
football
''The Quality Of Madness'' - Presenting Marcelo Bielsa, Leeds...
When Leeds United sacked Paul Heckingbottom as head coach after only four months in charge at the end [ ... ]
boxing
From Tapia To Tyson: When Blood And Tears Stain The Boxing Tapestry
“Of all the skills a boxer has to master, none is as mystifying as pain management,” sports [ ... ]
football
Rushie To Everton And Diego Dates Madonna - The Best Footballing...
It was the equivalent of Virgil van Dijk appearing on the front cover of FourFourTwo in a Manchester [ ... ]
motorsport
Thank You, Thierry Sabine - The Dakar Rally Is One Of Sport's...
In 1977, cinemagoers first experienced the now-iconic image of Luke Skywalker staring out over the Tatooine [ ... ]
boxing
''Most Notorious African-American on Earth,'' The Life And Times...
What do Alan Turing, The Doors frontman Jim Morrison and the comedian Lenny Bruce have in common? These [ ... ]
rugby
Alexander Obolensky - Exiled Russian Prince, Fighter Pilot,...
Exiled Russian prince, fighter pilot, and a rugby international who once scored 17 tries in a single [ ... ]
rugby
After 50 England Caps Amy Cokayne Finally Embraces Life As A...
Amy Cokayne is 23 years old and already has 50 caps for England and a Rugby World Cup final behind her. [ ... ]
mma
How Dana White Used 20 Million Instagram Followers To Take On...
When Polish fighter Joanna Jedrzejczyk went to war (and lost) with China’s Weili Zhang in the [ ... ]
sports
Prince, Tyson Fury, Jose Mourinho - Sport's Greatest Ever Press...
It is strange how quickly new trends become traditions. Every afternoon at 5pm, when most people used [ ... ]
sports
Donors, Helpers, Providers - The Sports Stars Stepping Up To...
In times of crisis, there really is something to be gained from looking around at all the good that [ ... ]
football
Speaking The Same Language As Carlo And Jose - The Life Of A...
“What do you do in the bedroom?” “I sleep with your wife.” The life of a football [ ... ]
sports
'Quarantini' Anyone? How To Stay Healthy In Mind And Body At...
Keep those spirits up, dear reader! For many of us, being confined to our homes for the foreseeable [ ... ]
football
Exclusive Leon Osman Interview:The Rooney Explosion And Ancelotti...
Leon Osman couldn’t believe what he was seeing. The Everton midfielder had heard about a young [ ... ]
mma
''A Warrior Poet...Beautiful Man'' UFC Legend Frank Mir Shares...
Former UFC heavyweight champion Frank Mir has told The Sportsman of his admiration for WBC world boxing [ ... ]
boxing
54 Years In The Game, 400 World Title Fights, Bob Arum Is Still...
1966 is a special year in sport for a plethora of reasons.  It was the year the England football [ ... ]
football
'' I Believe In Fairies'' - The Life And Times Of The Extraordinary...
Brian Clough wasn’t just one of the most quotable managers in English football’s long history, [ ... ]
sports
Retired Jersey Numbers: When Sports Stars Become Immortal
Basketball creates universal icons who transcend the sport itself. Over the past three decades or so, [ ... ]
football
From Jules Rimet To The FA Cup, The Sporting Trophies That Went...
When the World Cup trophy was stolen in London on 20 March 1966, it threatened to plunge the most famous [ ... ]
motorsport
On The Ground In Australia As Coronavirus Threw F1 Into Chaos
The beginning of a season is normally a time of high excitement as we wait to see which teams have hit [ ... ]
football
'Wizard Of Dribble' Sir Stanley Matthews Was The First Gentleman...
Sir Stanley Matthews was no ordinary footballer. His was a career which spanned some three decades, [ ... ]
winter-sports
From Wheelchair To World Title, The Amazing Katie Ormerod
Katie Ormerod is at her family home in West Yorkshire, fresh from the news that she has just become [ ... ]
football
''It Will Always Niggle'' - Leon Osman Reveals Hurt At How His...
Leon Osman has told The Sportsman of the hurt that still lingers as a result of finding out by text [ ... ]
football
The Man Behind The FA Cup: How Charles Alcock Made A Modern...
There might never have been a more significant game of football than the one played at The Oval on 16 [ ... ]
boxing
The Mike Tyson Interview: ''Living Takes A Lot Of Courage.''
Mike Tyson’s life has been a well-documented roller coaster ride. A difficult childhood, then [ ... ]
football
60 Years In Football, Sacked 37 Times...There Really Is Only...
When it comes to jobs for life, Barry Fry has it covered. The 75-year-old has been in football for a [ ... ]
football
Exclusive Arthur Numan Interview: Rangers, Romario And Rock...
“You just cannot explain it,” insists Rangers legend Arthur Numan of the intense rivalry [ ... ]
mma
Exclusive: ''I Was Mentally Broke'' - UFC Legend Frank Mir On...
Few heavyweights have ever made more Ultimate Fighting Championship appearances than that man from Las [ ... ]
sports
Real Life Forrest Gump Is On A Mission To Discover What It Means...
Rob Pope is a 42-year-old vet from Liverpool who describes himself as “your average talkative [ ... ]
football
Pele On Tour - The Times The Brazilian Legend Brought His Brilliance...
One of the most recognisable names in football, and a player who pretty much did it all at the highest [ ... ]
football
Beauty, Drama, Passion And Tragedy - Why Italia '90 Was The...
You only have to listen to the classic opening title sequence used by the BBC for their Italia '90 [ ... ]
This website uses cookies
Cookies help us and our partners provide statistics. By browsing this website, you consent to the use of cookies in accordance with our Privacy Policy and Cookies Policy.
Accept & Close