There have been few like him in sporting history. As he stands on the verge of a seventh World Drivers’ Championship and a fourth consecutive title, Lewis Hamilton must surely be making a serious case to be recognised as Britain’s greatest ever sportsperson.

Blighty has been the home of many fantastic champions in the past, with the likes of Lennox Lewis, Paula Radcliffe, Sebastian Coe, Nick Faldo and Jessica Ennis-Hill all reaching the top of their respective sports. In recent years, Andy Murray became world number one in tennis, a sport in which – quite frankly – Brits had stunk out the joint for decades with few exceptions.

But Hamilton has come to absolutely dominate his sport.

Sure, Phil Taylor, Steve Redgrave, Tanni Grey-Thompson, Chris Hoy and Victoria Pendleton had sustained success in their disciplines too, but Hamilton is competing in an elite sport to which the whole world pays attention. Formula One is the very peak of motor sports, just as the 100 metres is the flagship of athletics and the World Cup is the ultimate for footballers and rugby players alike.

And Lewis is the undisputed best at what he does. Not just right now, but perhaps of all time.

His 93 career race wins is a mark unparalleled in F1 history. When he clinches his seventh crown – whether that’s in Turkey next weekend or in any of his three other shots at it before the season’s out – he will join Michael Schumacher on the record for drivers’ titles.

Yet Hamilton has owned the track in a way even Schuey couldn’t manage. Only once in the 35-year-old’s six title wins to date has he collected less than 70 per cent of the total points available over the course of a season, while Schumacher dipped below that mark four times in his seven successful campaigns. 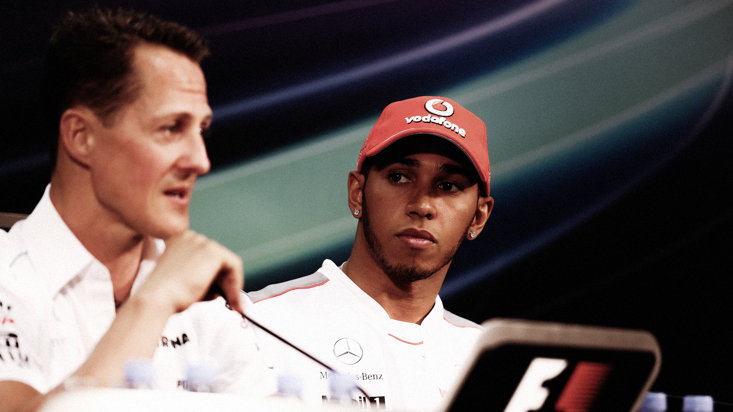 Some might argue that the German drove in an era when there was greater competition, but Lewis has faced Fernando Alonso head on and bettered him, ended Sebastian Vettel’s four-year stranglehold on the title and ground him into dust, and foiled talented drivers of the current era with his consistently brilliant driving.

It would be a crying shame if his comments following last week’s win in Emilia Romagna are a sign that the beginning of the end is nigh. “I would like to be here next year, but there is no guarantee,” said No.44, who also admitted that the idea of having a ‘shelf life’ was at the forefront of his mind.

He could well move on from Mercedes, but would it be the right time, at 35, to head to a new team and attempt to build them up from within? Schumacher did it when switching from Benetton to Ferrari but he was only 27 at the time. Either way, you’d be hard pressed to find anyone backing against Hamilton adding more titles to his honours list.

There will be sports fans who just plain don’t like Lewis, with his much-questioned non-domiciled status in the UK being a bone of contention, but that is to bring politics into the argument. It is no more a consideration in the judgement of his sporting prowess as is his charity work, his support of the Black Lives Matter movement or his switch to a more environmentally-friendly vegan diet.

The bottom line is that Lewis Hamilton is the best. The best in F1 in the 21st Century, and statistically the best of all time. And, despite a multitude of British sporting heroes of years gone by, he’s surely the greatest champion these fair isles have ever produced. Enjoy every last bit of his brilliance while you can.