It is less than two weeks after the assassination of John F Kennedy. On the dirt oval at the Jacksonville Speedway Park in Florida, a Chevrolet provokes the chequered flag to wave as, after 202 laps and one hour and 42 minutes of competitive racing, the car crosses the finish line in first.

The driver of the Chevrolet indeed received his winner’s check. He however did not receive his trophy. Nor was he announced to the tens of thousands of people in attendance that he was a victor. It was stated over the tannoy to spectators that Buck Baker - the man in second - was the champion.

Why? For no other reason than that the winning driver of the Chevrolet, Wendell Scott, was black.

Scott, had just become the first person of colour to win a race in America’s most popular motorsport. Baker, in the silver spot, was a white driver. It was only later, when fans had left the Speedway that the result was rectified and Scott was proclaimed the winner of the race.

That victory on December 1, 1963 should have been historic - heroic, even. Instead it served as a perpetual reminder over the racism and bigotry that exists within the United States of America, and poisons the lifeblood of the National Association of Stock Car NASCAR. 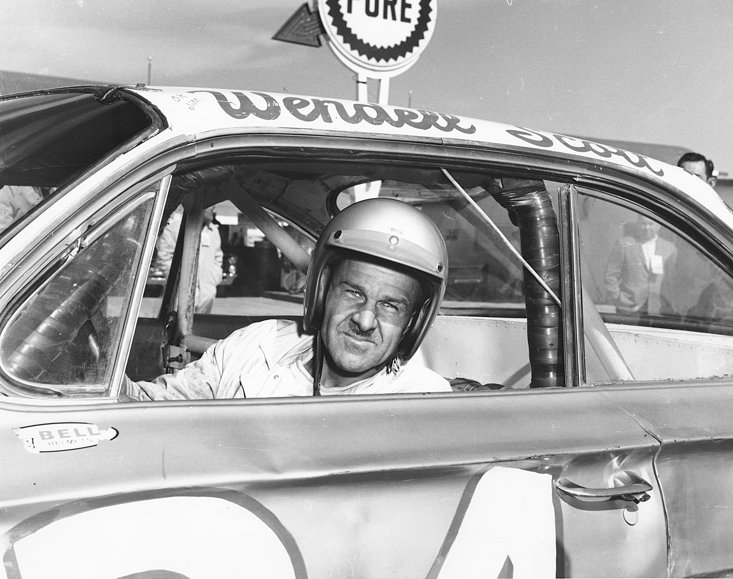 It would be exactly 50 years before another driver of African American heritage would win a race in one of NASCAR’s national series.

Scott was born on August 29, 1921 in Danville, Virginia. He learned the auto mechanic trade from his father, served in the US Army during World War II, and opened an auto repair shop following the conflict. This eventually led him to start competing in the Danville races which were run by a group called the Dixie Circuit, an early regional racing rival to NASCAR. In the widely detested and reviled Jim Crow era, black people were still not allowed to race in NASCAR.

After being incessantly rejected for a NASCAR licence due to his race, he finally gained one in 1953, and competed in his first sportsman-class race at Daytona Beach on February 19, 1954 in a ‘38 Ford.

He had persuaded Mike Poston, a NASCAR steward, to grant him a licence during an event at Richmond Speedway the year before. After success on the track, the Progress-Index declared Scott ‘the leading coloured driver in the nation’. He spent almost nine years at the regional level before moving up to the Grand National division in 1961.

Across his entire career Scott competed in 495 Grand National races, with 147 top-10 finishes, but faced constant hostility, from organisers, promoters, and fellow drivers, irked so much when he would beat them they’d slam into the rear of his vehicle, post-race, angered that a black man could do such a thing. 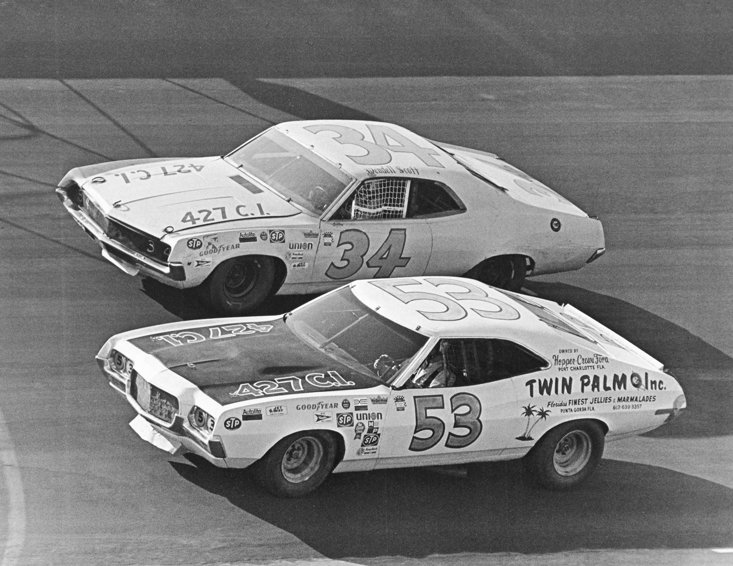 Wendell Scott retired after an accident in 1973. He died of cancer in 1990 and 25 years later was inducted into the NASCAR Hall of Fame. In 1977, a film, Greased Lightning, based on Scott’s life and achievements was produced, with legendary comedian Richard Pryor playing the role of the pioneering driver.

A pioneer - a person who begins or helps develop something new and prepares the way for others to follow (Merriam-Webster).

But it has been hard for people of colour to follow Scott onto the granite oval. Almost 50 years since his last competitive race, and 30 years after his death, Scott remains the only African-American driver to win a race at NASCAR’s top level and one of only two, along with Darrell ‘Bubba’ Wallace Jr., to win a race in a NASCAR national series event. 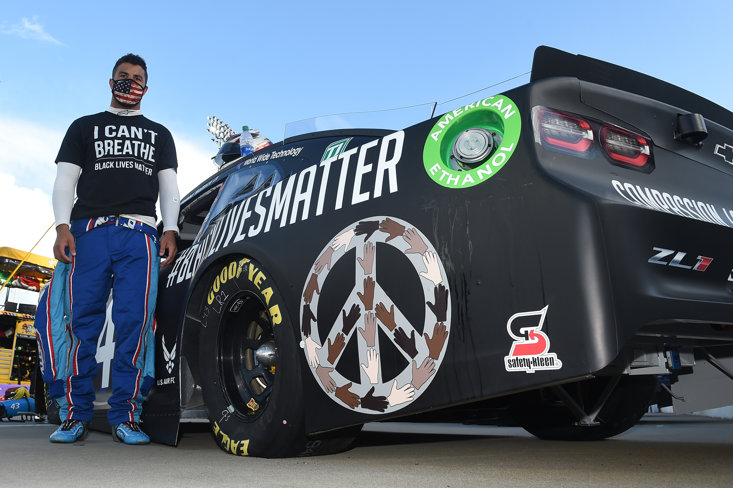 That win in Florida should have been a breakthrough event, helping to smash the racial barrier in the encouraging of a plethora of talented drivers from all ethnicities to participate. 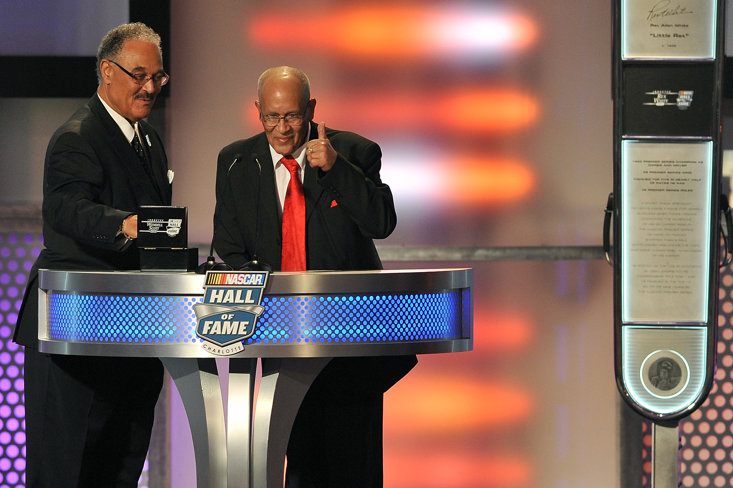 Franklin Scott and Wendell Scott Jr., sons of Wendell Scott at the NASCAR Hall Of Fame
x
Suggested Searches:
Tyson Fury
Manchester United
Marcus Rashford
Lewis Hamilton
F1
Air Jordan
More
football
30 Years On From His Man United Debut, Ryan Giggs' Legacy Will...
Ryan Giggs was always destined to be a star.  “Myself and Bryan Robson went to see the youth [ ... ]
darts
From Phil Taylor To Tiger Woods, Five Athletes Who Dominated...
We all adore sport when it is at its most competitive. Close title races, match points and play-offs [ ... ]
football
Everton ''Momentum Is Coming'' Under Ancelotti, Says Merseyside...
Kevin Campbell insists Everton are on the right track with Carlo Ancelotti at the helm but believes [ ... ]
football
Jordan Henderson The Key In Liverpool v Everton Derby, Says...
Liverpool and Everton go head-to-head in the 238th Merseyside derby on Saturday. While the Reds are [ ... ]
football
''Unique And Special'': Kevin Campbell On Netting Everton's...
“I was happy to pass it on 15 or 20 years ago!” exclaims Kevin Campbell of his place in [ ... ]
football
Who Are Wolfsberg? The Austrian Giant-Killers With Tottenham...
If you’ve only heard Tottenham’s Europa League Round of 32 opponents read out loud on the [ ... ]
football
How Grobbelaar Inspired Notts County’s New Goalkeeping Hero...
“My quads were hanging off from all the goal kicks!” exclaimed Notts County’s new [ ... ]
boxing
The Saint Valentine’s Day Massacre: When Raging Bull And Sugar...
At precisely 10.30am on February 14, 1929, four men, two dressed as police officers wielding Thompson [ ... ]
football
Referees Were Never So Bad That We Needed This Current VAR Mess
“You’re a rugby league and cricket fan,” said a colleague. “What do you make [ ... ]
cricket
England Should Go All Out In India In A Bid For Double World...
Following the exhilaration comes expectation. England’s commanding First Test win over India in [ ... ]
boxing
Josh Warrington Undaunted By Fan-Free Arena And Keen To Make...
“This is going to be a completely different experience,” admits Josh Warrington. The Leeds [ ... ]
football
Runner Stunned By Peter Crouch's ''Awesome'' Response To His...
Lockdown has forced us all to think outside the box. From businesses devising clever ways to keep things [ ... ]
us-sports
Antonio Brown’s Super Bowl Win Is One Of The Unlikeliest Comebacks...
They said Antonio Brown would never play football again.  Just last year, the wide receiver was [ ... ]
football
Amokachi, Di Canio v Barthez And The Long History Behind This...
For the dewy-eyed fan of the FA Cup, this week’s fifth-round matches provide the perfect example [ ... ]
football
The Demise Of Two Managers: When England Alienated Capello And...
For Harry Redknapp, it was the end of a nightmare. For Fabio Capello, it was the end of his relationship [ ... ]
football
Giroud, Belgium’s Golden Boys And The Players Who Really Need...
Euro 2020, or should that be 2021, is set to take place this summer, but with Covid-19 still gripping [ ... ]
football
Buffon And Casillas Now Joined By Neuer In Goalkeeping's Clean-Sheet...
Oliver Kahn is a Bayern Munich legend, with his fiery and ferocious persona between the sticks in Bavaria [ ... ]
football
Happy Birthday, Cristiano Ronaldo... A Role Model Football Can...
Cristiano Ronaldo has a mind-boggling 260 million followers on Instagram and is the most idolised footballer [ ... ]
rugby
The Greatest Games In 150 Years Of England v Scotland Calcutta...
England and Scotland have been heated rivals ever since the Romans built Hadrian’s Wall in 122AD, [ ... ]
sports
Michael Jordan, George Foreman And The Greatest Sporting Comebacks...
It was way back in 1990 that Stephen Hendry became the youngest-ever world snooker champion by defeating [ ... ]
football
Davies And Kabak Signings Should Transform Liverpool At Both...
Ben Davies is living the dream. On Monday he woke up as a Liverpool player, and tonight he could make [ ... ]
us-sports
How Tom Brady Went From Overlooked, Skinny Sixth-Round Pick...
Patrick Mahomes was just six years old when Tom Brady first achieved victory at a Super Bowl. One just [ ... ]
sports
Eat Like England’s Best! Top Tips From Two Of The World’s Best...
“Food should always be there as that enjoyable time, even if you are sat by yourself in front [ ... ]
football
Martin Odegaard's Rollercoaster Ride From Teen Sensation To...
As Martin Odegaard trotted onto the perfectly trimmed Emirates Stadium turf, it felt like the Gunners [ ... ]
boxing
More Than Just The Man Behind Ali: Angelo Dundee Was One Of...
"If I had a son who wanted to be a fighter and I couldn't talk him out of it, the only man [ ... ]
rugby
How The Six Nations Will Look With No Fans, Travel Issues And...
It was a three-month reign, but a reign it was. On 31 October 2020, 274 days after it all began. Eddie [ ... ]
boxing
'One Night In Miami' And Muhammad Ali's All-Too-Brief Friendship...
“Young, black, righteous, unapologetic, famous.”  Those exact words, in that exact [ ... ]
football
The Revolutionary Bitcoin Deal That Could Change Football Transfers...
It is more than a quarter of a century since Jean-Marc Bosman changed the football transfer market landscape [ ... ]
darts
Welcome To Q-School, Where Darts Hopefuls Battle To Be The Next...
It was in 2014 that newly-crowned darts champion Gerwyn Price was first advised to join the PDC Qualifying [ ... ]
football
''Keane Wasn't Angry'' Ex-Man Utd Star Lifts The Lid On That...
One of the most iconic rivalries in Premier League history will resume at the Emirates Stadium [ ... ]