The first season of the Premier League is viewed as a watershed moment for the English game and the ramifications are still being felt nearly 30 years on.

Boosted by a multi-million TV deal from Sky Sports, the new Premier League featured 22 clubs that broke away from the Football League a year earlier though the game’s “big five” steered the negotiations.

It was a time when clubs were desperate for more revenue to help pay for improvements to their stadiums in the wake of the Taylor Report which recommended wide-ranging improvements to stadia after the Hillsborough disaster. The influx of money also saw a boom in transfer fees as clubs looked to stay in this most lucrative of competitions.

The kits were baggy and bright, the boots were black and there wasn’t a betting sponsor in sight. Let us remember those wonderful shiny creations - refer to the image below for the players and kits. 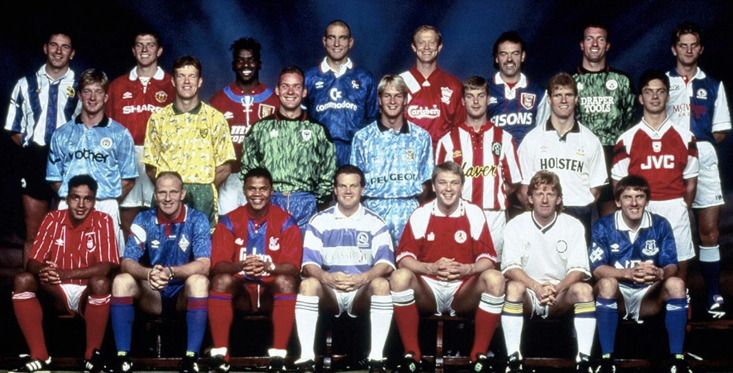 The Owls’ iconic blue and white stripes were complemented with black shorts and a polo shirt style collar. And no sponsor initially either.

Made by Umbro - as so many others were in this season - this is a design which still stands up today.

Drawstring collars were all the rage this season. Manchester United, Aston Villa, Sheffield United and Ipswich all decided to take inspiration from the past for their kits in 1992.

The United kit caused a few ripples on its release and all eyes were on Umbro as they replaced long-time supplier adidas. It’s a shirt which would go down in history as the one which Steve Bruce and Bryan Robson wore to lift the Premier League trophy. But it’s perhaps best remembered as worn by Eric Cantona - a surprising midseason signing from Leeds - with his collar up.

The Villains’ big collared lace-up shirt looked fantastic when paired with the club’s badge in an over-sized patch. Villa have been lucky to have so many great kits down the years and this truly stands the test of time.

Faithful sponsors Mita Copiers would soon be replaced by Muller on shirts made by Asics.

Chelsea have toyed with yellow, gold and red as a trim choice and in this season they chose a dash of claret. The best thing here on this Umbro strip is the Commodore sponsor which truly belongs in another era as does the old Chelsea badge which looks like it was put together on Microsoft Word.

The season after the adidas Equipment became “a thing” and the old Trefoil logo was lost on football kits, maybe forever. The three white stripes over the shoulder caused a bit of a stir when they first appeared a year earlier but we came to love them eventually.

The Fisons sponsor on Ipswich shirts always looked bigger than everybody else’s logo because it was on a slight angle. This was a shirt which also benefited from the Umbro craze from drawstring collars and was matched with huge baggy shorts.

One of two goalkeepers on this photo, Flowers looks pleased with his Admiral creation. The home kit which went with it was a classic red and white striped affair with a black collar, sponsored by Draper Tools.

Jack Walker’s money was starting to have the desired affect at Ewood Park as their expensively put together squad started to challenge the Premier League’s heavyweights. On the pitch they looked the part in this Asics effort which nicely married the famous blue and white halves with a splash of red trim. Shout out to the half and half collar too which is something of a rarity.

Brother enjoyed a long association with the Blues and this is a kit which has stood the test of time. Umbro’s shiny sky blue shirt was offset with a dark collar and gained a whole new audience when a local band featuring two gobby brothers hit the big time.

A kit often described as looking like the seats on public transport, Norwich’s striking design by Ribero is one which is held in high regard by the Canaries fans. It has since been referenced numerous times by the club’s more recent releases. The design was similar to that worn by another Ribero team, Coventry.

Admiral’s dark blue kit with yellow trim stands comparisons to the kit worn by the Wombles when they won the FA Cup in 1988. On this photo, goalkeeper Hans Segers wears the same templated kit as Tim Flowers, minus the sponsor.

Just wow! Coventry have a long history of cracking kits and we’re not entirely sure which category this one falls into. In a brave move by Ribero, they used the same print on the shirt AND shorts and the placement of the Peugeot logo seems ridiculously low. In isolation, the shorts wouldn’t look out of place in the swimming pool.

Their red and white “cracked” away kit was another which is fondly remembered by fans of the Sky Blues.

The Blades’ kit was another of Umbro’s drawstring era to be released this term. A smart red, black and white striped affair with Laver’s (a local timber merchant) sponsor logo nicely offset with a yellow trim.

Umbro’s first kit for Tottenham was an extremely smart affair. The dark blue collar sat nicely with a textured white shirt, featuring blue trim on the sleeves. The shorts were some of the baggiest seen since the 1950s, with the hem almost meeting the tops of the socks.

JVC will always be linked with Arsenal’s kits and this one was something of a rarity as it included blue trim on the sleeve. A thick white polyester V neck on this adidas effort seems a bit much in retrosepct.

A classic white pinstripe works well here for Forest and their famous red shirt, sponsored by Labatts. The Forest badge is pleasingly framed in a shield while the collar was unusually made from the same material as the body of the shirt.

People of a certain age will fondly remember Oldham’s brief time in the top flight under Joe Royle. This shirt by Umbro includes an almost mathematical symmtetrical sublimation with a white and red flash on the sleeve to complement the red collar. JD Sports would be added to the shirt as sponsor.

The Eagles have worn some classic kits down the years and this one, sponsored by Tulip Computers, was a cracker. Manufacturer Bukta were enjoying a bit of a revival at this point but the famous old brand would soon disappear, replaced by Ribero midseason. And is that a press-stud collar? Yes it most certainly is. The lesser-spotted contrasting shorts waistband also gets a tick from us.

Your eyes are not deceiving you, that’s Classic FM sponsoring the Hoops. The polo shirt collar suits this dashing number rather well. And can you remember the kit supplier here? It’s Brooks, the American sportswear company who continue to make very fine running shoes.

Middlesbrough’s kits have flirted with varying blocks of white, sometimes appearing as a band, sometimes as thin hoopes. Here, Admiral have landed Boro with white shoulders in another ridiculousy baggy number sponsored by ICI.

Admiral’s link with Leeds has a rich and fascinating history, dating back to the Don Revie teams of the 1970s. From a purely romantic point of view, it was good to see the Admiral logo back on a Leeds kit after they enjoyed a memorable relationship with Umbro which had famously seen them sponsored by Burton and Top Man during the eightes.

The over-riding feleing about this shirt is that it’s as baggy as a Joe Bloggs t-shirt with the sleeves covering elbows. Admiral also sponsored the shirts too which was something we also saw with Puma (Derby), Umbro (Celtic) and Reebok (Bolton) in years to come.

Everton fans have been blessed with some classic royal blue outfits down the years and this attempt from Umbro stands up to comparison with any of those. A white-collar and a bizarre sleeve graphic - something which Umbro had a real passion for at this time - are the highlights here.