A conversation about which sports shop to visit in this day and age of online retail doesn’t last long.

If you want to buy a tennis racquet you’re not going to have much luck in JD. You’ll end up in Sports Direct or Decathlon. If you want a pair of Nike Vaporax, you’re going to Foot Locker or JD.

But it didn’t always used to be like this. Sports shops - like record shops - were a regular sight on the high street. Often independent but more likely part of a national chain, these shops were must-visit destinations during the 1980s and 1990s.

In the way not all record shops sold the same stuff, sports retailers often had deals with certain brands and you’d often have to visit quite a few of them to find what you wanted.

Here in Manchester, Hurleys and MC Sports command a special place in the hearts of fortysomethings like me who used to dream of having enough pocket money for the latest designer sportswear. If you couldn’t save up enough for a Lacoste polo shirt or a Pringle sweater you might end up with Le Shark and Slazenger which didn't quite have the same cachet. Yet there were plenty of other options on the high street that could compensate for your appetite for the latest gear.

JD - or JD Sports as they were back then - used to be a cut above from the likes of JJB Sports and Allsports with their drawstring carrier bags highly prized by schoolchildren and reused more than any bag for life.

Sports shops were literally everywhere during the 1980s but these were not the only places to find the good stuff. There were huge sportswear departments in stores like Selfridges in London and also Lewis’s in Manchester. For me, the sports section in Whittakers, Bolton was an absolute treasure trove often stocking imported designs not available again.

Trips to nearby towns would mean a visit to an independent sport shop. Gibsons in Bolton; Rawcliffes in Southport; Oliver Somers in Wigan. Each had their own brands, layouts and carrier bags which gave them a unique identity.

But what happened to the sportswear chains that were just as much a fixture of the British high street as Woolworths or C&A?

Allsports started in the North West in the 1980s and grew steadily throughout the decade. In the 1990s it was a regular sight on most high streets and took a rather curious decision to rebrand itself as all:sports.

Although originally a sport shop in the “proper” sense in that you could buy a cricket bat or a tennis racquet, through the 1980s it tried to cash in on the sports-fashion boom and was at the peak of its powers for the World Cup in 1990 when Umbro shellsuits and replicas were must-haves.

The chain went into administration in 2005 meaning the closure of 267 stores and many of those were acquired by JD Sports.

Stoke-based Bourne Sports might not mean a lot to you. But for many years, they operated a successful mail order section alongside their shop in Stoke which sold not only football kits and boots but also trainers and running gear. Their adverts in magazines like Shoot and Match were a regular fixture during the 1980s and they often crop up on football nostalgia Twitter accounts.

The company was sold to Sports Direct and its subsidiary Sweatshop in 2016.

Former footballer Dave Whelan built an empire of sports stores over three decades starting from the humble origins of one shop in Wigan.

Through the 1990s they enjoyed tremendous success and bought Sports Division in 1998. They built on their success by opening stores in Ireland and further afield and were often the subject of takeover interest from JD Sports and Sports Direct.

After resisting several bids from Sports Direct, they finally sold up with the prospect of administration looming.

Once a must-visit destination for sports fans visiting London, especially in the 1980s, this well-appointed store has been in Piccadilly Circus since 1925. The shop was famed for supplying the city’s upper classes with croquet and real tennis equipment and it was regarded as the finest sport retailer in the world.

During Wimbledon fortnight, an endorsement in the store’s window displays was highly prized.

In the 1980s, it became famed amongst football fans from Liverpool who had traveled to see their team play in the capital. The store often stocked hard-to-find brands like Ellesse, Fila and Sergio Tacchnini which became a staple of the sports-casual wardrobe.

Additional stores opened in cities including Leeds, Newcastle and Nottingham but when the brand was sold in 2002 to Sports World, they essentially became Sports Direct.

I remember being excited about going to Lillywhites for the first time in years only to leave swiftly, crestfallen that this once magnificent emporium was now just a replica of the Sports Direct in my hometown. 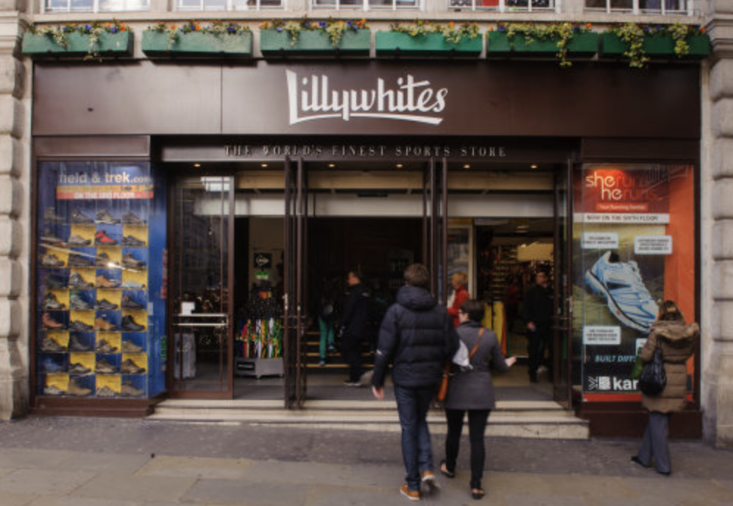 A regular sight on high streets through the 1980s and often as a concession within department stores, Olympus were the dominant sports retailer for many years.

Quick to realise the crossover between sport and fashion, they enjoyed huge success but were eventually sold to a group led by Philip Green.

Unlike the competition, they had their own brand gear alongside the likes of Nike and adidas.

JJB tried to emulate JD’s success in the top end market with Original Shoe Company which they acquired from Sports Direct and Qube. They chain didn’t take off despite its stores looking sharp and they disappeared when JJB was swallowed up by Sports Direct.

Long before you could buy a Juventus shirt at your local JD, Soccer Scene prided itself on having the largest range of football kits from across the globe.

The store's catalogues from the 1990s were highly prized and their mail order department was kept busy through the 1980s and 1990s. This was probably the only place you were going to find a football shirt from Italy, France of South America. It moved to a larger site on London's Carnaby Street but could not keep up with the competition and the trend to change kits every season cannot have helped.

Founded in the 1980s from the back of a van, Sports Division took advantage of new out-of-town retail parks with supermarket size units. But in 1998 following a sharp downturn in trade, they found themselves an easy target for JJB who paid £295million for the business.

Another North West-based brand, Streetwise was gobbled up by Mike Ashley’s Sports Direct for around £10million in 2007.

Often cheaper than their rivals like Allsports and JJB, Streetwise pushed its own brands and seemed to target teens and children in its final years.