It’s hard to believe but it’s now been a full four decades since jockey Bob Champion, two years after being diagnosed with cancer, won the 1981 Grand National atop of Aldaniti, one of the most famous victories in the Aintree steeplechase’s history.

In the build-up to the 2021 instalment, Champion, now 72, sat down with good friend Derek Thompson to discuss his memories of that famous race 40 years ago and looked ahead to Saturday’s showpiece.

“It definitely doesn’t feel like 40 years ago, I still remember it like yesterday,” says Champion “I’d been to the track in the morning and sat on the old horse. And, you know, he felt a million dollars. He was so relaxed, he’d never been so relaxed in his life before, so he must have realised it was a big occasion as well.

Champion went back to his hotel on the morning of the race and had a boiled egg and also revealed he was advised to have two glasses of champagne as it would keep him relaxed. It seems to have done the trick as went on to run a brilliant race.

Remembering the race four decades ago, he recalled clearing Becher’s Brook, only realising how close to the ground he got when a French photographer sent him an image of the race a few weeks ago. After that, Champion had one thought, victory.

“I think, I've got to start riding here and I knew Philip Blacker was there on Royal Mail and it just felt I was going better than him… from then the ground is awful, very tacky and all that kept going through my head was Josh (Guildford, his trainer) saying, ‘Keep hold of his head keep all of his head’

“I'm lining up for the last fence and at Aintree, you've got to jump the last fence in middle; if you jumped on the inside you've got to veer right again, so you're losing about a length and a half . You have to be tactical, so I've jumped in the middle, come into the last but couldn't see a stride.

“There wasn't one, the old horse is getting tired so, do I stand him off or do you let him just drift a little bit and get a short one in? For once in my life, I did things right,” he jokes. “I let him drift 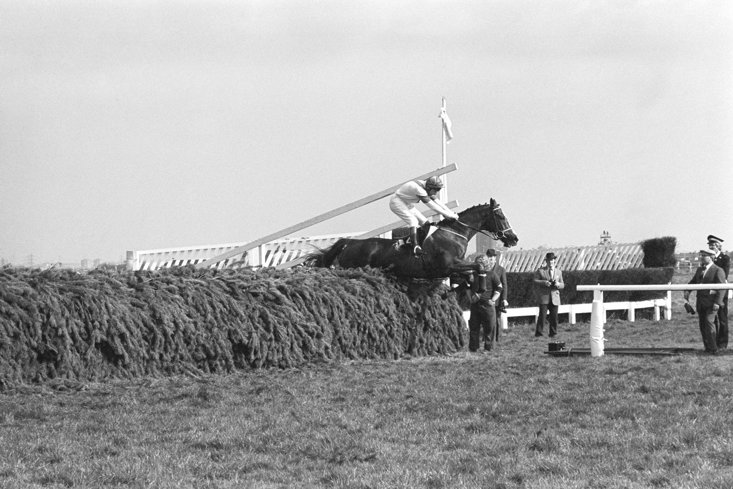 It was a massive run and one that put Champion into the boxing history books and it is perhaps one of the most memorable victories of all-time.

When he arrived in the weighing room ahead of the race, there was a telegram waiting, which read ‘Dear Bob, You must win the race today because I lost my daughter when she was three-years-old and you must win and tell people you can recover from cancer’.

Champion’s victory was a massive achievement on a personal level and will have inspired thousands more who were suffering or had suffered from the disease.

“I was very fortunate, I got a lot of telegrams,” he explained. “In those days there wasn’t mobile phones and texting, so people sent telegrams to all the jockeys in the race and they were all put on a board and you’d go and pick your name out, how things have changed through the years. I got some really nice telegrams.”

Since then, he has dedicated his life to helping others and the Bob Champion Cancer Trust has raised a massive £15million.

“We’ve got two research laboratories which are doing a really good job,” he says. “It wasn’t me who set the trust up, it was people in this country, sent their winnings to the Royal Marsden, care of me and that’s how it all started.”

“First thing, if you feel something wrong, go and see a doctor. Be positive, it can be cured. My cancer was 30 percent chance of recovery, now its 95 percent, that’s how far it’s gone in 40 years.”

Champion by name and Champion by nature, the racing legend inspired 40 years ago on the racecourse and has continued to have a lasting impact on people around the glove ever since.