The tourists’ bowlers toiled hard as Khawaga, who was dropped on 28 by Joe Root, led the hosts to a commanding first-innings 416/8 declared with his ninth Test hundred. England got to stumps unscathed, just, after Zak Crawley was reprieved by a Mitchell Starc no-ball.

It was a story of two players out for redemption as recalled Khawaga, playing in his first Test for over two years, made 137, whilst Stuart Broad took 5/101 — England’s first five-wicket haul of the series.

Khawaga’s hundred highlighted the gulf in class between the two teams. England are yet to have a centurion on this tour, whilst Khawaga is Australia’s seventh choice batter.

The hosts’ strength in depth has been startling this series. Travis Head, who was replaced for this game by Khawaga due to testing positive for Covid-19, was picked ahead of Matthew Wade for the first Test and repaid the faith as he smashed 152 at the Gabba.

Josh Hazlewood hasn’t played since sustaining a side strain in Brisbane and Jhye Richardson took 5/42 in Adelaide. MCG specialist Scott Boland replaced Richardson and took 6/7 in a sensational debut as Australia wrapped up the Ashes after just 12 days of cricket in Melbourne.

Broad has been frustrated by his lack of opportunities to influence the series after missing out in the first Test at the Gabba and the third Test at the MCG, grounds where he averages under 25 with the ball. He was described as a “caged tiger” ahead of returning at the SCG with the series already over as a competitive contest. And he gave a sense of what could have been had he played earlier in the series as he picked up his 19th Test five-wicket haul and eighth in Ashes cricket. 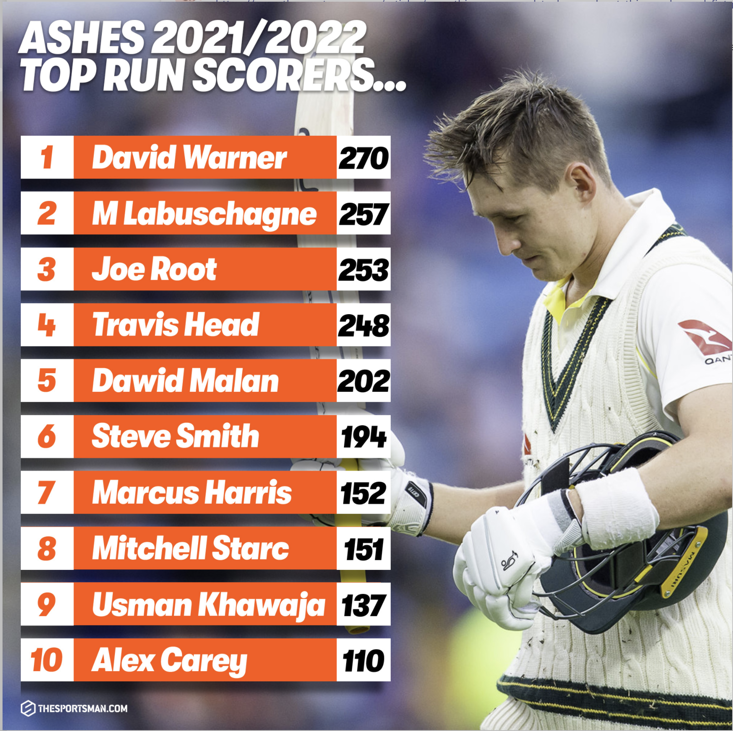 Speaking at the end of the day, Broad said: “I still feel like I have a lot to offer this team. If you’re asking me if I’d have loved to take five wickets in the first Test at the Gabba then of course I would have loved to. But that opportunity wasn’t presented to me.”

The game was finely poised as Australia resumed day two on 126/3. A couple of early wickets would have set England up nicely to bowl Justin Langer’s side out for under 300. But Steve Smith and Khawaga frustrated the visitors with a dogged 115-run fourth-wicket partnership.

Broad dismissed Smith, for 60, and Cameron Green with the second new ball. And England had hopes of bowling the Aussies out for under 350 when Pat Cummins gloved a Broad bouncer, but Starc — who made 34 — ably supported Khawaga in a handy 67-run stand. Broad got a deserved five-for when he nipped one back through the gate to finally dislodge Khawaga, who left to a standing ovation from the SCG crowd.

Cummins declared after Nathan Lyon deposited Broad into the stands to set up a tricky 20 minutes for England’s openers, which they survived with the help of some long overdue luck.

Under-fire opener Crawley spoke of his confidence at starting the year in style with a hundred after a dismal 2021, where he averaged just 10 in Test cricket. England ended the year with a record 54 ducks, and they almost started 2022 with one as Crawley edged a ball angled across him for zero before replays showed Starc had overstepped.

Tomorrow’s the day which will likely define whether England head to Hobert trying to starve off a 5-0 whitewash, with showers forecast for day four. Joe Root’s side resume on 13/0 and they can learn from Australia’s willingness to be resilient when things get tough to amass a big first-innings score. Ben Stokes’ was forced to stop bowling with a side niggle in the morning session, but returned to field and is expected to bat as normal.

Broad added: “Tomorrow’s a big day for us on this trip. The pitch isn’t misbehaving too much. We’ve got a batting group who are desperate to stamp their authority in Australia and tomorrow’s a great opportunity for them.”

England are 40/1 to win the 4th Test with Betfred*