Maybe it’s not the hope that kills you after all. Maybe it’s the prior knowledge of something bad happening, because you don’t even have the hope that way. We’ve known from the off that England are a distant second best to Australia, and now that it’s taking place in front of our eyes it only feels worse.

Australia are six wickets away from a 2-0 lead in the Ashes, and the formality will surely be completed in Melbourne shortly after the third Test’s Boxing Day start. The only question now is the same one many of us were asking from the moment the English summer ended. Can England avoid a third whitewash in five Ashes tours?

Even when Jimmy Anderson and Stuart Broad accounted for Michael Neser and Marcus Harris in the space of three balls on Sunday morning, the tourists were a long, long way behind the eight ball. Maybe if Jos Buttler had followed his brilliant catch to dismiss Harris by pouching an easier chance offered by Steve Smith off the very next ball then there would have been a smidgen of hope. Or had Broad’s appeal off the second ball to Smith rightly been met with the pointed finger of the umpire, Australia would have been 48 for 4.

Still, they led by 285 runs at that point and what materialised instead was completely as expected. There were fifties for Marnus Labuschagne and Travis Head, a wagging tail led by Cameron Green, and an Australian declaration shortly before tea with a lead of 467. England were going to have to bat through the difficult twilight period twice to save the Test match. 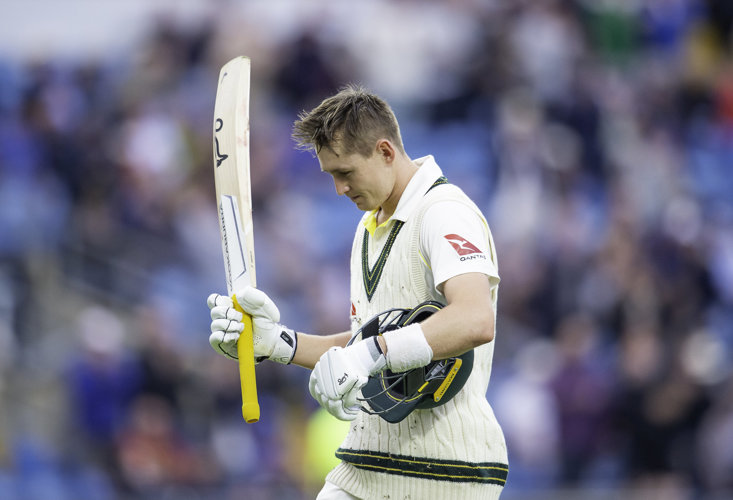 AFTER HIS FIRST-INNINGS 103, LABUSCHAGNE GOT ANOTHER 51

But they started predictably. Haseeb Hameed was out for a duck after edging a wonderful Jhye Richardson delivery, and Dawid Malan’s dismissal for 20 left them with over 100 overs to see out with only eight wickets in hand. Throw in the fact that one of those wickets was Rory Burns’ and you might as well have called it seven.

In 31 Test matches, Burns is now averaging only 30 after he finally edged Richardson to Smith for 34 having experienced a thorough going-over from the Aussie quick. For at least two years now it has looked fairly obvious that Burns is not the answer England have been looking for opening the batting, and having scored only 51 at 12.75 in the Ashes so far this winter he has to be the prime candidate to stand aside for the promotion of Zak Crawley back into the XI.

The kick in the guts came in the last over of the day, with Joe Root being duped into playing at an angled Mitchell Starc delivery and turning round to see Alex Carey celebrating, ball in hand. England are 82 for 4 heading into a fifth day which won’t make it to tea. It would be stunning at this point if they stick it out beyond lunch.

England need help. They need changes. They need better body language and greater enthusiasm for the task. This was never going to be easy, and the players already look as beaten as we feared they would be after the five-Test series was over.

There’s another 16 days scheduled of the Ashes this winter, and it feels right now as though every one of them will be just as depressing as the last.