The end, already, is nigh. After only six days of Ashes cricket, the series is Australia’s to lose. The early close to Friday’s play because of an electrical storm in the Adelaide area saved England further pain after they had started their response to the hosts’ 473 for 9 declared by losing two early wickets.

This is quickly turning into the long, depressing winter that England fans were dreading.

Their team has toiled in the field for five-and-a-half sessions of the second Test, with Marnus Labuschagne completing a 287-ball century first up on day two having been given two incredibly soft lives on the opening day and later getting another when Ollie Robinson over-stepped on a nick behind. There would be tougher times ahead despite Labuschagne going lbw to Robinson for 103, with Steve Smith and Travis Head adding 50 for the fourth wicket and then Smith and Carey putting on 91 for the sixth.

Stand-in skipper Smith eventually became the second batter to be dismissed in the nineties, being trapped by Jimmy Anderson for 93 following David Warner’s 95 on Thursday, but Australia still made hay after he was gone as debutant Michael Neser and Mitchell Starc racking up a quickfire 58 between them and Jhye Richardson thrashing a six as part of a 25-run, nine-ball stand with Starc. By the time Smith called them in, Australia’s tail was using the Ashes as batting practice for the Big Bash League.

Given a little over 90 minutes to last in the night session under the lights, England never looked comfortable with the task at hand and it wasn’t long before they’d lost both openers. Rory Burns’ travails against Starc continued when he edged straight to Smith at second slip for four, and then Haseeb Hameed chipped naively to mid-on to hand Neser his first Test wicket. Joe Root was again arriving at the crease inside the first seven overs, an all-too-familiar sight for England fans in recent years. 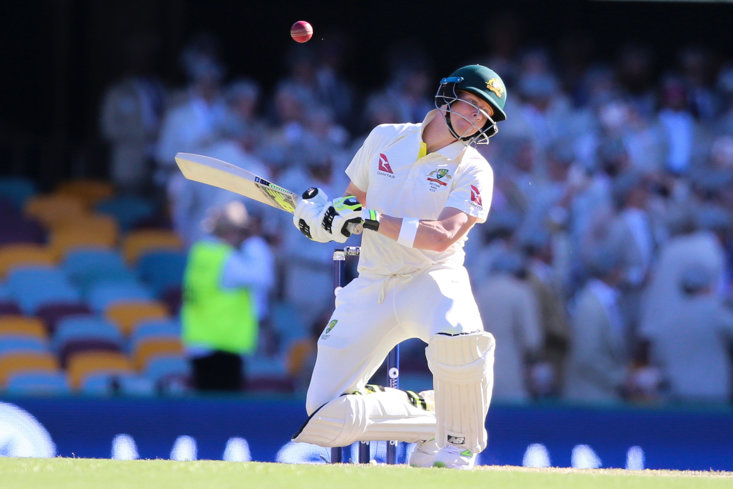 SMITH WAS BACK TO HIS FRUSTRATING BEST IN HIS 93

A threatening-looking electrical storm brought an early end to proceedings with England 17 for 2, but there is a proverbial mountain to climb going into day three on Saturday. In truth, the expectation has to be that they will be all out at some stage tomorrow and then watching Australia tack on quick runs ahead of another declaration. This was exactly the eventuality we’d all feared.

Australia are streets ahead of England on current form. Their unit is strong, their off-field issues of recent years cast aside. Even in losing their captain Pat Cummins due to a close contact with a positive Covid case and fellow pace bowler Josh Hazlewood with a side injury, the Aussies have got something out of their second string already.

Neser came in and hammered 35 off 24 balls then struck early with the ball, while Richardson wellied nine from three deliveries and then conceded a single run off four overs as his control from one end prompted material gain at the other.

Meanwhile, England’s first-choice lineup is anyone’s guess. After another failure at the top of the order, Burns will probably be batting for his immediate future in the side come the second innings. The middle order seems fixed for now, but Root and coach Chris Silverwood could do with really working out what they need from their bowling attack. Having dropped Jimmy Anderson and Stuart Broad in Brisbane, they have picked a far too similar front five in their XI in Adelaide.