Cricket
News
The tourists surrendered the sacred urn inside 81 minutes on the third morning at the MCG
Shane MacDermott
08:47, 28 Dec 2021

Ruthless Australia blew sorry England away to retain the Ashes on the third day of the third Test in Melbourne.

The tourists surrendered the sacred urn inside 81 minutes on the third morning at the MCG.

Debutant Scott Boland, picked as an ‘MCG specialist’ to exploit local conditions, returned fine figures of 6/7 as Chris Silverwood’s side were embarrassingly bowled out for just 68 as the hosts romped to a thumping innings and 14-run victory in front of a jubilant Melbourne crowd.

The fact England failed to force the Aussies to bat again when they only made 267 in the first innings is simply inexcusable in anyone’s book. Even by their sorry standards it makes for gruesome reading.

To give up the most precious prize in English cricket so meekly will leave huge questions hanging over coach Silverwood and captain Joe Root. But it epitomises where England are at as a Test team, lacking answers and skill in the intense heat of battle.

It was, perhaps, fitting that they saved their worst collapse to hand dominant Australia an unassailable 3-0 lead in the series – Pat Cummins’ first in charge after the Tim Paine sexting scandal. And who would bet against the men in Baggy Greens sending the visitors packing with another humiliating 5-0 series whitewash under their belts like in 2006/07 and 2013/14?

The gulf in class between the two sides is clear, but the way they just gifted Justin Langer’s side the urn was pathetic to say the least. Those players need to take a long, hard look in the mirror.

For as fantastic as Australia’s fast-bowling brigade is, you simply can’t be bowled out for 68. The lack of fight shown during their abject performances has been startling.

The final five wickets feebly fell in the space of 29 balls as England registered their lowest score down under since March 1904.

It took Australia just 12 days to clinch the Ashes. And it has been some of the most calamitous cricket from an English touring side ever. They were never in the series.

As much as you can excuse their undercooked batters failing on the opening morning of the series, their brittle batting line-up has been exposed time and time again by some high-class bowling.

Root’s men have won just one day of the series so far, when he and Dawid Malan compiled a defiant stand of 162 at the Gabba, and that tells the story. It’s been nowhere near good enough. 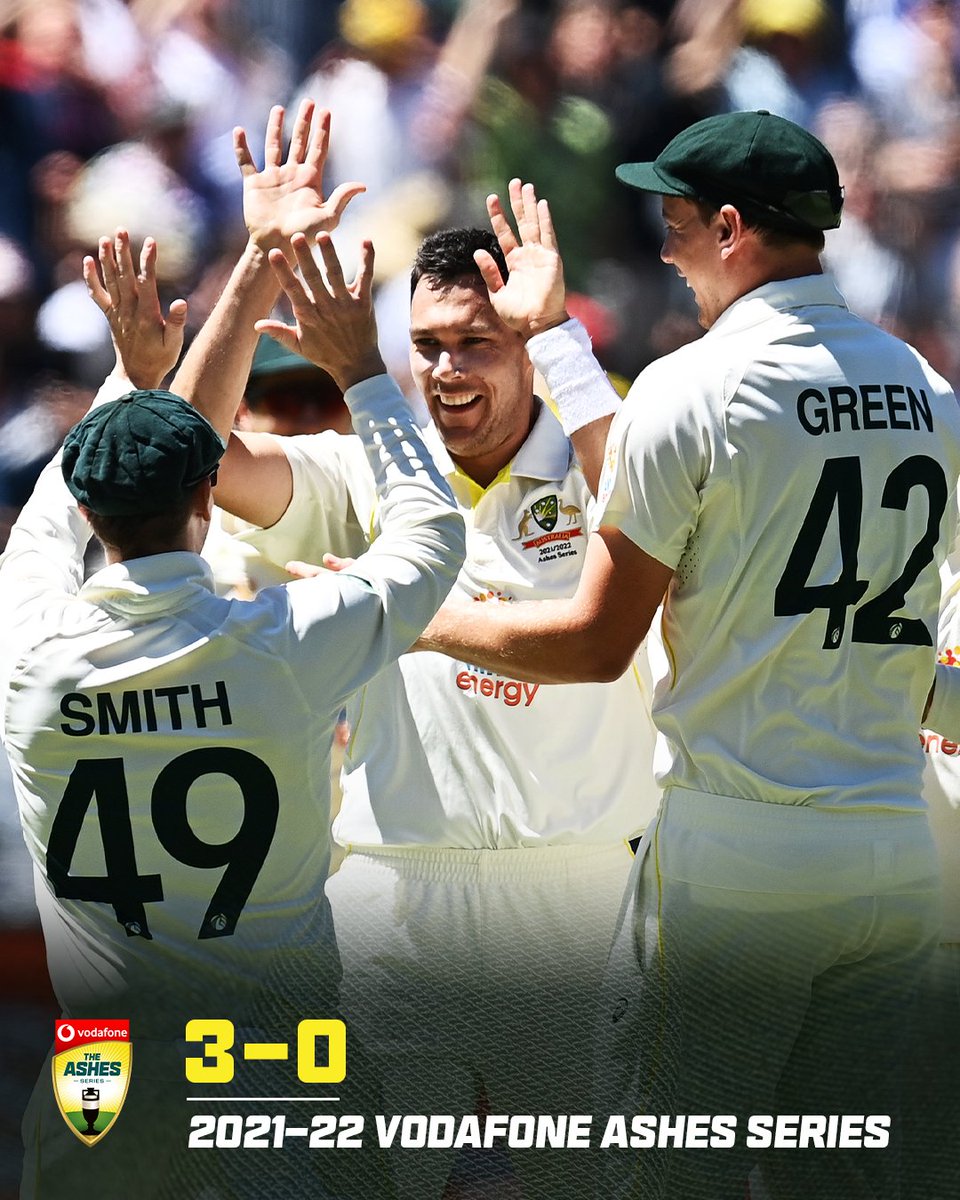 The match was done and dusted as a contest on the second evening, but no-one could have envisaged just how ugly things would get as England failed to make it to the lunch interval. Mitchell Starc and Cummins broke the back of the innings with their hostility, before England succumbed to Boland’s probing accuracy.

England resumed on 31/4 and the writing was on the wall when Ben Stokes was beaten by a decent Starc delivery which nipped back through the gate to reduce the visitors to 46/5. But they comically capitulated even further as they lost their last five wickets for just eight runs.

After Stokes’ dismissal it was well and truly the Boland show. Jonny Bairstow was unlucky to be given out lbw, with two umpire’s calls on review. But Root’s frustrated flash ended a record-breaking year on the lowest of lows.

Under-pressure skipper Root has been England’s outstanding performer with the bat in 2021. He went beyond 1,700 runs for the calendar year. Only Sir Viv Richards and Mohammad Yousuf have made more. Rory Burns, who was dropped for this game, is their next best with 530. It’s a tale of woe.

Mark Wood and Ollie Robinson were removed for ducks – the 53rd and 54th of the year for the shell-shocked side. Cameron Green put them out of their misery as he bowled James Anderson to secure as convincing a series win as you’re ever likely to see.

England only have pride left to play for in Sydney and Hobart on what is becoming a farcical tour.

Crestfallen Root said: “We do not want to be stood there 5-0 down at the of the series. We have to put some pride back into the badge.”

Victorious captain Cummins beamed: “It’s pretty insane, just an awesome few weeks. Any Ashes series is when you try and make a mark on your Test career. Last series was 4-0, the one before that was 5-0. These go down in Ashes history and we can cement our identity as a team for the next few years.”