If you’re looking for a cricket batting record, odds on Sachin Tendulkar probably owns it. The India great therefore certainly is qualified for comment in regards to issues in Test cricket. That’s why his voice echoes one of the loudest as the debate surrounding four-day Test matches rolls on.

The new format could well become mandatory by 2023 for the World Test Championship if sanctioned by the International Cricket Council (ICC), with a decision expected to be made this year.

In October 2017, the ICC approved a request for a four-day Test match between South Africa and Zimbabwe, which started on Boxing Day of that year. The ICC then went on to trial the four-day Test format until the 2019 Cricket World Cup.

The mooted move has proven controversial. Five-day Test matches are seen to epitomize the sport, provoking gruelling endurance from cricketers, mentally and physically and to treat the occasion as a true event, regardless of the longevity and time consumption - in contrast often bolstered by it.

And now cricketing heavyweight Tendulkar - with no doubt the backing of a one billion nation behind him - has waded into the storm calling Test “the purest form of cricket” and definitively stating to the Mumbai Mirror that “It should not be tinkered with.”

Tendulkar's sentiments are chorused by his compatriot and current India captain Virat Kohli who has stated that he is "not a fan" of the proposal to reduce Test matches from five to four days (via the BBC).

The Afghanistan Test with Australia in the new season has been reported to be prepped to be changed to the new conditions.

ESPNcricinfo
@ESPNcricinfo
10 years ago today, Sachin Tendulkar became the first man to make 30,000 international runs 🙏
He is the only man to do so, and still the highest run-scorer of all time 🐐 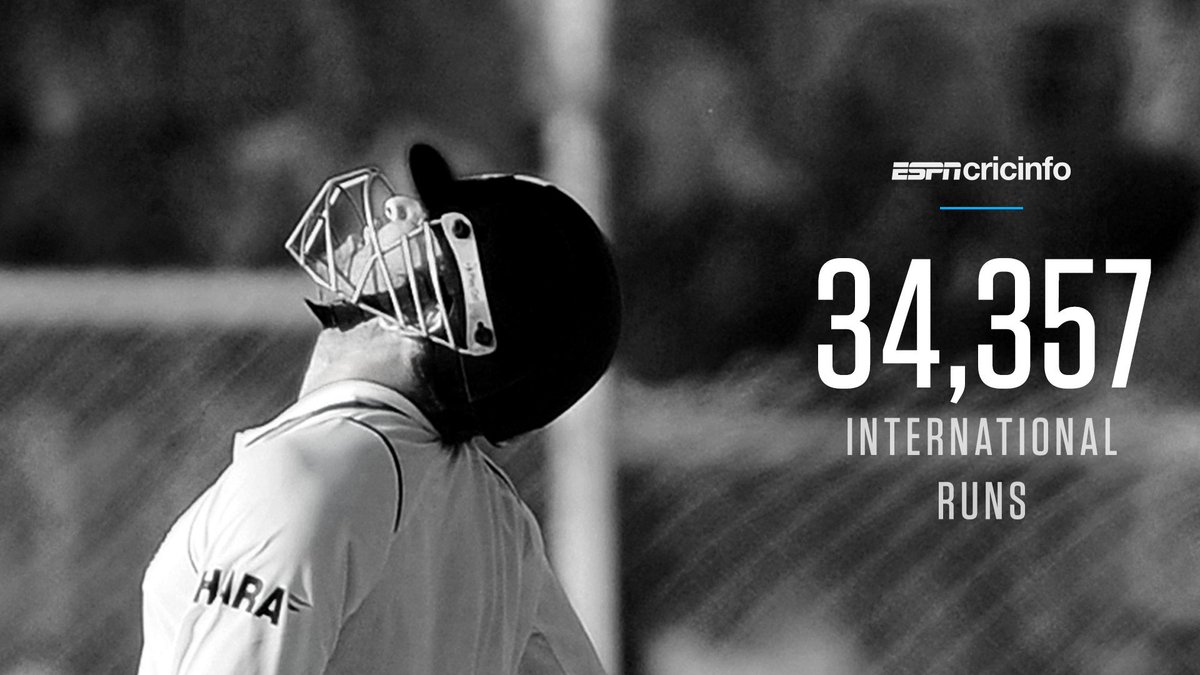 Australian off-spinner Nathan Lyon has already disowned the notion (on The Unplayable Podcast, via the Sydney Morning Herald), alongside teammates Tim Paine and Travis Head, calling  it “ridiculous,” and Ricky Ponting and South Africa captain Faf du Plessis have signalled their opposition.

It has however garnered support from 2005 England Ashes-winning captain Michael Vaughan who has proclaimed that the sport "will die" if it remains in its current state (The Telegraph).

Tendulkar, however, also suggested the advantage and enjoyment five-dayers provide for those actually participating in the sport, that might have gone unrecognised: “Spinners look forward to bowling with the scruffed ball, taking advantage on day five of the roughs created on the wickets,” Tendulkar said.

“All that is part of Test cricket. Is it fair to take that advantage away from spinners? There is T20, there is one-dayers and then there are T10 and 100-ball cricket.“

“The ICC, in my view, should focus on providing quality playing surfaces. Let the ball do things - spin, seam, swing and bounce. It will automatically liven-up the game. It will also throw up more results. Currently, there are far too many dead games.”

Maybe now it will hopefully become a case of if Sachin speaks up, traditional Test fans can rest easy.

The ongoing Second Test between South Africa and England is proving to be the latest example of the five-day game's unique lure. On the fourth morning, England's acceleration to 375 for 7 - a lead of 421 runs - gave them time to make a concerted effort at levelling the four-match series at 1-1, with the home side facing the prospect of negotiating a wearing fifth-day pitch. Under the proposed regulations a four-day format might have allowed the Proteas more opportunity to bat slowly on a less worn pitch and play for a draw.

This is just the kind of scenario the ICC will be asked to take into account when they meet to discuss the possible changes.

x
Suggested Searches:
Manchester United
Liverpool
Manchester City
Marcus Rashford
Premier League
More
cricket
Sophia Dunkley Is England's Newest Cricketing Icon That Can...
Sophia Dunkley is a history maker. She became the first black woman to play Test cricket for England’s [ ... ]
cricket
ECB Right To Suspend Ollie Robinson As Cricket Looks To Learn...
Culture Secretary Oliver Dowden joined a number of outspoken critics of the ECB’s suspension of [ ... ]
cricket
New Zealand Bring Desire, England Are Just Dire As First Test...
When New Zealand could have batted for a draw, they went hell for leather on the final day at Lord’s. [ ... ]
cricket
''I Can Still Improve'' Jimmy Anderson Part Of Resurgent Older...
Whisky. Fine wine. Jimmy Anderson. Just three things that get better with age. England’s highest [ ... ]
cricket
World's Best Cricketer Ben Stokes Has Become England's Imperfect...
If there is one thing the British public love more than an underdog story, it is a tale of redemption. [ ... ]
cricket
England Just Fall Short Against India Despite Sam Curran Heroics...
England came up short against India, losing by just seven runs in an absolutely thrilling ODI decider [ ... ]
cricket
England’s Aggressive Batting Pays Off As Bairstow And Stokes...
When England’s top three bat like this, there is simply no side in the world that can stop them. [ ... ]
cricket
Three Years On, Steve Smith Deserves Big Praise For His Response...
On this day three years ago the entire sporting world collapsed on Steve Smith’s shoulders. In [ ... ]
cricket
Root's Calm Head Missed As England Collapse To 66-Run ODI Loss...
India have defeated England by 66 runs in the first one-day international in a game that will once again [ ... ]
cricket
India T20 Win Over England Could Be Perfect Precursor To 2021...
England have lost the T20 series in India 3-2 having been comprehensively beaten in the final match. [ ... ]
cricket
Blistering Buttler Leads England To Bounce-Back T20 Win Over...
England showed their resilient side on Tuesday as they bounced back from Sunday’s defeat in the [ ... ]
cricket
Kohli Takes Centre Stage As England Come Up Short Against India...
England came up short in the second T20I match v India, losing by seven wickets as Virat Kohli proved [ ... ]
cricket
Archer And Roy Star As England Sweep India Aside In Opening...
England began Twenty20 World Cup year in emphatic fashion as they hammered India by eight wickets in [ ... ]
cricket
Weather No Excuse, England Must Learn From Woeful Batting Performance...
How quickly things can change. England’s 227 run win in the First Test v India feels like a lifetime [ ... ]
cricket
Why A Massive Fourth Test Against India Could Define England's...
England’s whole year might well ride on the outcome of Thursday’s Fourth Test against India. [ ... ]
cricket
Brittle England Beaten Inside Two Days As India Survive The...
It was one of the most chaotic days of Test cricket ever but by shortly after tea on day two in Ahmedabad [ ... ]
cricket
Sidebottom Wants To See Both Broad And Anderson Play Third Test...
Former England bowler Ryan Sidebottom says England ought to select both Stuart Broad and Jimmy Anderson [ ... ]
cricket
The Hundred Can Help Revolutionise Women’s Cricket And Inspire...
The long-awaited The Hundred competition is set to revolutionise cricket and will finally kick off this [ ... ]
cricket
Should Test Cricket Lose The Toss After India's Battering Of...
England have nobody to blame but themselves for the manner of their 317-run mauling at the hands of [ ... ]
cricket
Sidebottom Hails ''Fantastic'' Root And ''Stunning'' Anderson...
Ryan Sidebottom has heaped praise on both Jimmy Anderson and captain Joe Root following England’s [ ... ]
cricket
Fantastic Jimmy Anderson Wraps Up A Statement England Win In...
England wrapped up a dominant First Test win over India on Tuesday, with Jimmy Anderson collecting three [ ... ]
cricket
100 Up! Joe Root's Timely Form Could Be The Difference For England...
He is the baby-faced batsman who slotted into England’s line-up in India in 2012-13 and immediately [ ... ]
cricket
Tailenders Is The Easy-Listening Pod That Takes An Alternative...
At the moment, we’re all enamoured with cricket, thanks to India digging in and out-saucing the [ ... ]
cricket
The New Book Shining A Light On The Biggest Scandal In Cricket...
It has been nine years since the News of the World ceased publication. Nine years. Doesn’t time [ ... ]
cricket
How Botham And England Revived The Spirits Of A Nation At The...
In the summer of 1981 a combination of spiralling unemployment and racial tension had led to riots in [ ... ]
cricket
Ben Stokes Inspires England Victory In Five-Day Test Classic
This was five-day test match cricket at its finest. Ben Stokes took the final three wickets on Tuesday [ ... ]
cricket
England Head To South Africa Test In Search Of Answers And A...
England end a historic 2019 by taking on South Africa in the First Test in Centurion this week. But [ ... ]
cricket
England World Cup Winner Moeen Ali's Conscious Uncoupling From...
“I just want to get that buzz back”. England’s Moeen Ali has continued to put [ ... ]
cricket
England Fail To Win A Test Series In A Calendar Year For First...
England have lost another Test series in 2019, which brings to a close a difficult 12 months that has [ ... ]
cricket
Joe Root Double Century Gives England A Glimmer Of Hope Against...
Joe Root hit a stunning double century to give England a slight hope of victory against New Zealand [ ... ]