A brilliant ride by Frankie Dettori saw Snowfall win a fantastic Cazoo Oaks at Epsom on Friday, storming to a phenomenal 16-length win.

It was a sixth Oaks victory, and a third in five years, for 50-year-old Dettori, who sat deep at the tail of the pack to begin with before taking the initiative on the 11/2 shot in the final straight and leaving the rest for dead. It was also a ninth win in the race for trainer Aidan O’Brien, and there have surely been none more emphatic.

“They went too quick, I couldn’t believe it,” Dettori told ITV after the race. “She went through the ground like a knife through butter. I had everything beaten in front, I was just worried about Santa Barbara… then she took off!”

The 50/1 shot Mystery Angel came in second, with Divinely finishing third at 20/1. The 5/2 favourite Santa Barbara left it too late for a placing, ending up in fifth.

“We thought she was very good last year but she’s just got stronger through the winter,” trainer O’Brien told ITV. “Frankie gave her a very good ride.” 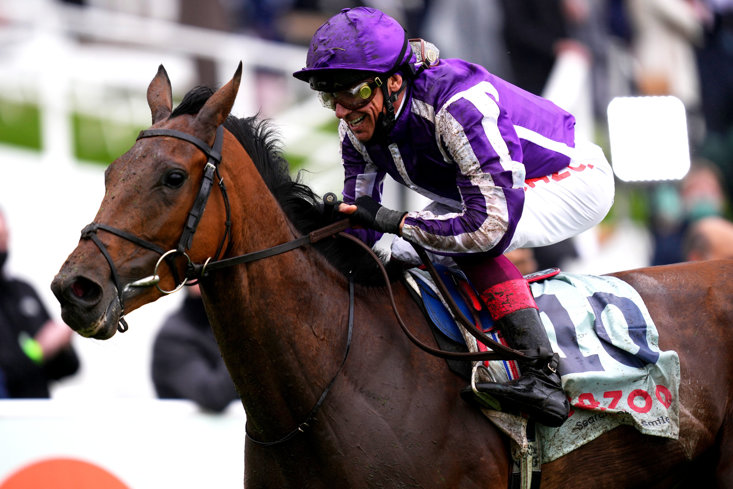 Dettori, who marked the win with his trademark flying dismount, has now secured Oaks victories over a 27-year span, with his first success in this race coming on Godolphin horse Balanchine in 1994. He backed that up with a second successive win riding Moonshell the following year before recording a 2002 triumph with a third Godolphin winner Kazzia.

His 2017 win on Enable was a first Oaks winner in 15 years, and Anapurna brought him number five two years ago. None of those victories though, were quite as dominant as Friday’s sensational ride on Snowfall.

The ace trainer is being well-backed to complete a double in Saturday’s Cazoo Derby, with Bolshoi Ballet currently a runaway 6/4 favourite with Betfred.