Cricket
News
This T20 World Cup campaign will go a long way to deciding whether the glittering Morgan era is nearing its end
Kris Voakes
11:16, 22 Oct 2021

Oh, how quickly sport moves. As England approach their first major white-ball tournament since that incredible 2019 Cricket World Cup triumph, their brilliant captain Eoin Morgan now finds himself under the spotlight. Their Men’s T20 World Cup campaign will go a long way to deciding whether the glittering Morgan era is nearing its end.

So indifferent has his form been of late that the Irishman has even admitted he could drop himself during the tournament in the UAE and Oman. “It’s always something I’ve said. That is always an option,” he told reporters recently. “I’m not going to stand in the way of the team winning the World Cup. Obviously I’ve been short on runs, but my captaincy has been pretty good as it goes.”

While Morgan succeeded Alastair Cook for the 2015 World Cup as a result of the opener’s poor form in the white-ball game, the 35-year-old’s captaincy has indeed given him a very different standing within the dressing room. Those who have been party to his day-to-day activity suggest he is a born leader first and a cricketer second, with his ability to smash runs in the middle order a more than handy addition to his armoury.

And that’s why he will head into Saturday’s World Cup opener against the West Indies with the backing of coach Chris Silverwood and the entire England squad. Morgan’s leadership of men was a key element in the 50-over success in 2019 and could be a vital factor in them justifying their status as one of the favourites this time around. With oddsmakers Betfred, only India at 2/1 are more fancied than England’s 4/1. 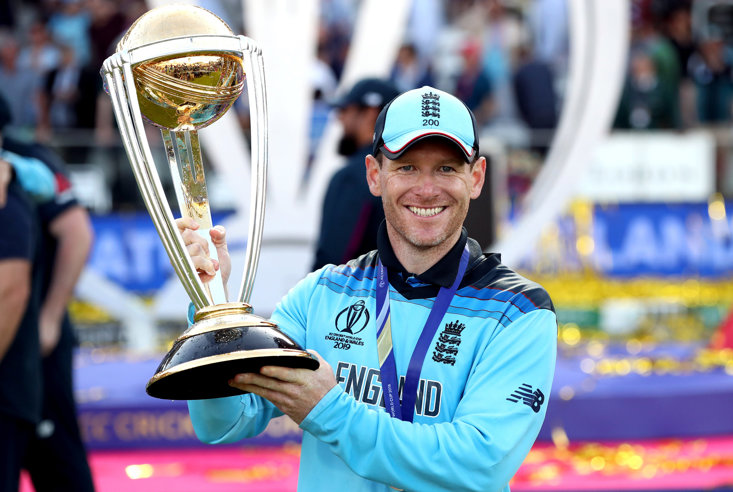 There are other questions about England beyond the captain himself. With no Ben Stokes due to his hiatus from cricket and missing Sam Curran through a back injury, there is no tried and tested pattern to their lower order before the tail kicks in. The lack of all-rounders could be a serious issue when Morgan and Silverwood come to deciding on their XI in the later stages of the competition.

At the top of the order they should get enough runs out of Jason Roy, Jos Buttler and Jonny Bairstow to set them on their way in most matches, while the ball will be in good hands with the likes of Chris Woakes, Mark Wood and Adil Rashid. It shows the strength in depth that even without the likes of Stokes, Curran, Moeen Ali and Jofra Archer there are lots of other options available, even if Morgan would like to have more players who can contribute in both innings to make both the batting and the bowling lineups deeper.

After their devastating loss in the 2016 T20 final to Carlos Brathwaite’s four successive sixes, England still have the motivation to go and break new ground, even if their 2019 win came in a more revered form of the game. And given what is riding on the next three weeks for Morgan personally, this is still a captain and a team with much to prove.

Victory would cement Morgan’s name among England’s all-time cricketing greats, but a disappointing return could well hasten the end of a golden era.

x
Suggested Searches:
Manchester United
Liverpool
Manchester City
Marcus Rashford
Premier League
More
cricket
Ashes 2021/22: Sloppy England Hand Head-Inspired Australia A...
It was as demoralising as it was predictable. And England got what they deserved again. The second day [ ... ]
cricket
Ashes 2021/22: England's Horrific Opening Day Collapse Is Nothing...
The only comforting thing about watching Rory Burns lose his leg stump off the first ball of the Ashes [ ... ]
cricket
The Changing Factors That Mean England Can Win The Ashes In...
Six months ago there was almost no hope for England Down Under. Yet on the eve of the Ashes, which begins [ ... ]
cricket
Ashes 2021/22: England's Five Greatest Moments In Recent Ashes...
It’s almost that time again. The Ashes, that famous old little trophy which has been the subject [ ... ]
cricket
Cummins Takes Australia Captaincy Just When Cricket Needs Leadership...
As expected, Pat Cummins is the new Australia Test cricket captain ahead of the forthcoming Ashes series. [ ... ]
cricket
Cricket Faces A Long Road Back After Azeem Rafiq Revelations
To call the revelations that have rocked cricket over the last few weeks ‘damaging’ would [ ... ]
cricket
The Ashes Preview: England Relishing Battle With Australia Down...
Sport gets the juices flowing – and none more so than a mouth-watering Ashes series to savour. [ ... ]
cricket
Road To Redemption: Australian Cricket Can Finally Put 'Sandpapergate'...
Australian cricket was brought to its knees by the now infamous ball-tampering scandal.  ‘Sandpapergate’, [ ... ]
cricket
Mitchell Marsh Inspires As Australia Beat New Zealand To Clinch...
Mitchell Marsh delivered the performance of his life to secure Australia's first ever T20 World [ ... ]
cricket
England Dumped Out Of T20 World Cup By New Zealand As Mitchell...
England suffered a gut-wrenching defeat in their World Cup semi-final as New Zealand, inspired by Daryl [ ... ]
cricket
England's Semi-Final Vs New Zealand To Be Decided ''By The Barest...
“England have won the World Cup, by the barest of margins! By the barest of margins!” Two [ ... ]
cricket
Yorkshire And English Cricket Need Full Disclosure Amid Deplorable...
These are pretty horrendous times to follow Yorkshire cricket. The racism scandal which has rocked not [ ... ]
cricket
Brilliant Buttler Ton Moves England Tantalisingly Close To Men's...
A sensational century from Jos Buttler inspired England to a vital 26-run victory over Sri Lanka in [ ... ]
cricket
New Zealand Hammering Leaves India Heading For Early Exit From...
India are already on the verge of elimination from the Men’s T20 World Cup thanks to a humbling [ ... ]
cricket
England Are The Early Pace Setters At T20 World Cup After Bangladesh...
It is still early days at the T20 World Cup, but from what we have seen so far, Eoin Morgan’s [ ... ]
cricket
Influential Ben Stokes Is Back - But Can He Inspire England...
If there is one man that can save England Down Under, it is Ben Stokes. He is the beating heart of Joe [ ... ]
cricket
Moeen Ali Retires From Test Cricket Having Broken Down Barriers...
After 64 matches, five centuries and 195 wickets, Moeen Ali has called time on his England Test career [ ... ]
cricket
England's All Too Predictable Batting Collapse Costs Them Test...
Another inevitable England batting collapse. On a strangely sunny Monday morning in early September, [ ... ]
cricket
Consistency Now Key As England Look To Repeat Headingley Heroics
“Just when I thought I was out, they pull me back in…” There was a moment there where [ ... ]
cricket
England's New Look Line-Up Already On The Back Foot As India...
In the week that saw Lord Ian Botham appointed trade envoy to Australia, England’s current crop [ ... ]
cricket
Without Everyone Playing Their Part, England's Cricketing Struggles...
Former England Test cricket bowler Ryan Sidebottom believes England can enjoy success again if the whole [ ... ]
cricket
England's Batting Line-Up Is Shoddy, But The Lack Of Depth Is...
An Englishman with a bat in front of three sticks of wood has now become as nervy of a spectacle as [ ... ]
cricket
England's Final Day Defeat To India Was Inevitable, And Root...
A disaster. A shambles. An embarrassment. Several words have been used to describe England’s fifth [ ... ]
cricket
Rain And Root Deny India, But England Can't Keep Relying On...
In the end, the rain finished off the job Joe Root had started. The First Test between England and India [ ... ]
cricket
The Greatest Test Match: England's 2005 Edgbaston Ashes Win...
It felt like the peak of Test cricket at the time. Arguably, it remains the greatest ever game in the [ ... ]
cricket
Time For Joe Root's England To Find Some Consistency - Sidebottom
Former England Test bowler Ryan Sidebottom insists that Joe Root’s side must turn in a stirring [ ... ]
cricket
Ben Stokes' Break From Cricket Highlights The Strides Made On...
It is a truly wonderful thing that Ben Stokes will not be in England’s Test squad to face India [ ... ]
cricket
Ryan Sidebottom: England's T20 Hopes Have Received A Huge Boost...
We’ve seen the likes of Jonny Bairstow, Ben Duckett and James Vince flashing the bat to great [ ... ]
cricket
Ryan Sidebottom: The Hundred Is ''Off To A Great Start'' After...
Ryan Sidebottom believes cricket's divisive new tournament 'The Hundred' proved [ ... ]
cricket
Ryan Sidebottom: Why The Hundred Is A Game Changer For Women's...
For women in particular, The Hundred is huge. Ahead of the first ball being bowled it has had its doubters [ ... ]